The stress response is adaptive, and stress resilience is regarded as the result of the adaptive response to a stressor [1][2]. The hypothalamic-pituitary-adrenal (HPA) axis is activated under various stressors (Figure 1A). Limbic structures, such as the central amygdala, bed nuclei of the stria terminalis, and nucleus accumbens shell of the extended amygdala, and the hippocampus, play an important role in stress responses. In parallel, stress responses also activate a physiological system for stress adaptation (Figure 1B). 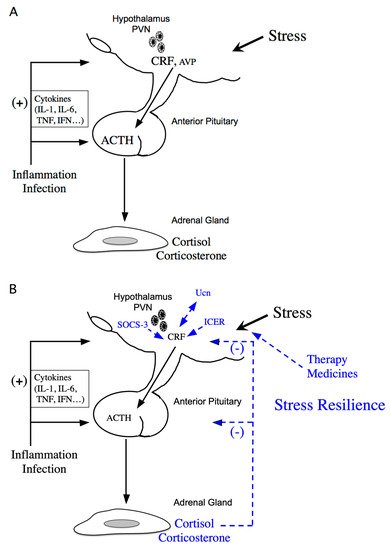 Figure 1. Schematic model of hypothalamic-pituitary-adrenal (HPA) axis regulation. (A) Activation of the HPA axis under stress. Corticotropin-releasing factor (CRF) plays a central role in controlling stress responses. Cytokines also stimulate CRF production under inflammation or infection. CRF, produced in the hypothalamic paraventricular nucleus (PVN), stimulates adrenocorticotropic hormone (ACTH) production from the corticotrophs of the anterior pituitary (AP). ACTH then stimulates corticosterone and cortisol release, the principal glucocorticoids in rodents and human, respectively, from the adrenal glands. (B) Regulation of the HPA axis under stress resilience. Glucocorticoids are produced by ACTH in the adrenal glands. Circulating glucocorticoids are critical for recovery from stress conditions. Both inducible cAMP-early repressor (ICER) and suppressor of cytokine signaling (SOCS-3) contribute to the negative regulation of CRF synthesis in the hypothalamus. The urocortin (Ucn)-CRF receptor type 2 mediates “stress coping” responses. Therapy or medicines also target this to alleviate stressed states.

2. Molecular Mechanisms of CRF Regulation in the Hypothalamus

Many neurotransmitters and neuropeptides are involved in activation of CRF neurons in the hypothalamus. Serotonin, noradrenaline, neuromedin C, and thyrotropin-releasing hormone affect intracellular Ca2+ concentration in CRF neurons of the PVN [3] and activate CRF neurons. Pituitary adenylate cyclase-activating polypeptide (PACAP), a member of the secretin/glucagon/vasoactive intestinal peptide family, and glucagon-like peptide 1 (GLP1) also stimulate Crf gene activity in hypothalamic cells [4][5]. PACAP can contribute to CRF activation in the hypothalamus under emotional stress. In fact, the extended amygdala and the bed nuclei of the stria terminalis are identified as innervation sites of PACAP neurons. Both PACAP and the PACAP-selective PACAP receptor type 1 are highly expressed in the hypothalamus and the supraoptic nucleus [6][7]. PACAP increases Crf mRNA levels in the parvocellular region of the PVN, suggesting its involvement in the positive regulation of Crf gene expression [8]. The cyclic AMP (cAMP)-protein kinase A (PKA) pathway is involved in CRF synthesis by PACAP [4]. GLP1 also stimulates the activities of both Crf and Avp promoters in hypothalamic cells [5]. Basal promoter activities of Crf and Avp are increased in high glucose medium [5], while Crf and Avp promoter activities are increased by GLP1 in standard or low glucose medium but not in high. Hyperglycemia is, therefore, a stressor increasing the synthesis of CRF and AVP in the hypothalamus.
Stress resilience is considered the result of the adaptive response to a stressor. Circulating glucocorticoids are critical for recovery from stress conditions and essential for stress resilience (Figure 1B). Treatment with glucocorticoids in adrenalectomized rats does not perfectly prevent the increase in stress-induced Crf heteronuclear RNA [9]. Therefore, factors other than glucocorticoids might be involved in limiting CRF activation during stress. Inducible cAMP-early repressor (ICER), a cAMP-inducible member of the CRE modulator (CREM) family and a CREM repressor isoform, are such candidates [10][11]. CREM, CREB, and AP-1 bind to CRE promoter elements to stimulate transcription [12], while ICER acts as a competitive inhibitor of such CRE-dependent transcription [10]. Therefore, ICER can suppress the stress response via inhibition of the cAMP-dependent Crf gene [13] (Figure 1B). Suppressor of cytokine signaling (SOCS)-3 acts as a potent negative regulator of cytokine signaling [14]. SOCS-3 suppresses cytokine-induced ACTH production in corticotrophs [15]. IL-6 stimulates Janus kinase/signal transducers and activators of the transcription (JAK/STAT) signaling, while IL-6-induced SOCS-3 acts as a negative regulator and inhibits STAT phosphorylation by JAK at the receptor complex [16][17]. SOCS-3 is stimulated by IL-6 and cAMP, while SOCS-3 knockdown increases IL-6- or forskolin-induced Crf gene transcription, thereby contributing to the negative regulation of CRF synthesis in the hypothalamus [18] (Figure 1B).

3. Roles of the CRF Peptide Family and Stress-Related Peptides and Their Receptors under Stress

Urocortins (Ucns) are members of the CRF peptide family. Three Ucns have been found in mammals. Ucn1 has potent effects including appetite suppression and modulation of the cardiovascular system [19][20][21]. Ucn2 has more potent vasodilatory and cardiac inotropic effects than CRF and shows suppression of host resistance to infection via IL-10 upregulation [22]. Ucn3 modulates insulin secretion and Ca2+ influx in pancreatic β-cells [23] and improves cellular stress responses and glucose uptake [24].
The actions of the CRF family peptides are mediated by ≥ 2 distinct G protein-coupled receptors, namely the CRF receptor type 1 (CRF1 receptor) [25][26][27] and CRF receptor type 2 (CRF2 receptor) [28][29][30]. CRF has a higher affinity for the CRF1 receptor than for the CRF2 receptor (Figure 2) [31]. Ucn1 binds to both the CRF1 and CRF2 receptors, while Ucn2 and Ucn3 are highly selective for the CRF2 receptor, with little affinity for the CRF1 receptor (Figure 2) [19][32][33][34].

Figure 2. Proposed signaling mechanisms of corticotropin-releasing factor (CRF), urocortins (Ucns) and CRF receptors. CRF-BP, CRF-binding protein. Solid lines represent a high affinity binding, and dashed lines a low affinity binding.
These two receptors share 69% amino acid homology [29] but have different tissue distributions and pharmacological properties with respect to ligands [31]. CRF1 receptor is mainly expressed in the pituitary, the brain, and various peripheral tissues. In pituitary corticotrophs, CRF1 receptor is the major subtype responsible for regulating ACTH synthesis and secretion. CRF2 receptor is located in different brain areas than the CRF1 receptor and is also abundant in the periphery. The CRF2 receptor has ≥ 3 alternative splice variants, CRF2a receptor, CRF2b receptor, and CRF2g receptor. In the rat, CRF2a receptor mRNA was found primarily in the brain and the pituitary [35][36]. In contrast, the CRF2b receptor was predominantly expressed in peripheral sites such as the heart, gastrointestinal tract, and vascular smooth muscles [36]. CRF receptors primarily activate adenylyl cyclase and cAMP pathways through Gsα activation. In addition, CRF receptors can activate other types of Gα [37].

Figure 3. Schematic model of transcriptional regulation of the corticotropin-releasing factor (Crf) promoter. Possible binding sites for transcriptional factors such as the cAMP-response element (CRE), activator protein 1 (AP-1) protein (Fos/Jun) binding sites, the half glucocorticoid regulatory element (GRE), and the half estrogen-responsive element (ERE) in the proximal Crf promoter. The Crf promoter region also contributes to glucocorticoid inhibition as a negative GRE (nGRE), as it includes a serum response element (SRE).
Additionally, other promoter regions are involved in the inhibition of Crf gene expression in hypothalamic cells (Figure 3). Crf promoter sequences between –248 and –233 bp are also involved in the glucocorticoid suppression of cAMP-stimulated Crf promoter activity (Figure 3), including a serum response element (SRE) [44], which contributes to the negative response to glucocorticoids, because the GR can bind to SRE and inhibit promoter activation by antagonizing positive transcription [44]. Therefore, in addition to nGRE, the glucocorticoid suppression of cAMP stimulated CRF promoter activity may also be caused by SRE in hypothalamic cells.