Hyaluronan (HA) is a major component of the ECM that consists of repeated disaccharide units of N-acetylglucosamine and glucuronic acid. HA is synthesized as a high molecular weight molecule but is degraded into heterogeneous fragments by hyaluronidases and reactive oxygen or nitrogen species. The biological activity of HA depends on its molecular weight. HA fragments stimulate tissue inflammation and fibrosis. In contrast, high molecular weight HA suppresses these processes and maintains tissue homeostasis. This functional duality is particularly important during wound repair where HA sequentially promotes then suppresses inflammation and fibrosis. In contrast, in tumors, HA effects are often co-opted to increase growth and invasion.

Decades ago, Dvorak concluded that cancer is spawned in chronic non-resolving wounds, implicating a role for the status of the host microenvironment in cancer initiation, and focusing attention on identifying the processes of wound repair that are co-opted by mutant cells to initiate tumors and support their progression to metastasis [1]. Subsequent studies have identified the processes of inflammation and fibrosis, which are critical to efficient wound repair, as key microenvironmental factors that promote cancer progression [2][3][4]. Hyaluronan (HA) has emerged as an important extracellular matrix (ECM) regulator of inflammation and fibrosis in the setting of excisional wound repair [5][6][7][8][9][10][11].

The collection of genes that controls the synthesis, metabolism, and signaling properties of the tissue polysaccharide, HA, are collectively called the hyaluronome, and include HA synthases responsible for the production of HA, HA receptors, which bind HA and activate cellular signaling cascades; and hyaluronidases, which break the native HA polymer into fragments that differ from the native polymer in their signaling functions [5].

HA is a simple linear polysaccharide consisting of repeated saccharides (N–acetylglucosamine, and B–glucuronic acid disaccharide units form the HA polymer), and was historically considered to be an ‘inert’ structural component. At that time, effects on cell behavior and tissue homeostasis were postulated to result from the physicochemical characteristics of HA that provide tissue hydration, expansion, and elasticity [12][13][14]. Although these physicochemical characteristics of HA are impressive and critical to the homeostasis of organs such as skin [15][16], the demonstration that HA activates kinase cascades in cultured fibroblasts [17] and binds to specific cell receptors such as CD44 [18] and RHAMM (HMMR) [19] provided initial evidence of its signaling properties. HA has since been shown to regulate MAP kinase, PI3 kinase, Hippo, and multiple growth factor signaling networks [5][20]. The complex functional information provided by this simple linear polymer is due in large part to metabolism-related changes in both its expression level and in its molecular weight. For example, the native newly synthesized HA polymer (defined here as high molecular weight HA, HMW–HA, >500–700 kDa) blunts cell proliferation and migration and is anti-inflammatory as shown by studies demonstrating its functions to suppress an M1 and enhance M2 polarization of macrophages [21][22]. These properties of HMW–HA are considered important for maintaining tissue architecture and homeostasis, particularly in the skin. In contrast, smaller HA polymers, produced by enzymatic and/or chemical degradation of HMW–HA (e.g., low molecular weight HA, LMW–HA, 10–250 kDa; and oligosaccharides, O–HA, <10 kDa) as a result of cell stress/death, function as ‘danger alerts’ (DAMPs [23][24]), and are strongly immunogenic. These tissue damage–induced HA oligomers provide pro-inflammatory (e.g., support M1 macrophage polarization), proliferation and migration signals [5][25][26] (Figure 1), and are critical for initiating a response-to-injury.

Figure 1. Hyaluronan contributes to inflammation and also the resolution of excisional wounds. Native (high molecular weight, HMW–HA) hyaluronan production is increased upon and throughout tissue injury. Low molecular weight (LMW–HA) and oligosaccharide (O–HA) fragments are rapidly generated from HMW–HA hyaluronidases and ROS/NOS, resulting in a mixture of HMW and fragmented HA polymers. LMW– and O–HA both promote macrophage and fibroblast influx into the wound that initiates inflammation while HMW–HA restrains the extent of inflammation. At later stages of wound repair, HMW–HA predominates and supports macrophage polarization into the immunosuppressive M2 phenotype. Created with BioRender.com (accessed on 12 September 2021).

In mammals, HA is synthesized by one or more of three genetically distinct cell membrane isoenzymes, hyaluronan synthases 1–3 (HAS1–3). These synthases differ in their enzymatic properties, regulation by stimuli, and contribution to normal and pathological processes. For example, whereas HAS1 and 2 synthesize HMW–HA (avg. 2 × 103 kDa), HAS3 synthesizes shorter HA polymers (avg. 2 × 102 kDa). HAS2 is expressed during early embryonic development and its genomic deletion leads to embryonic lethality resulting from cardiac defects [27]. In contrast, Has1–/–, Has3–/–, and Has1:Has3–/– mice are viable [28][29][30].

HMW–HA produced by HAS1–3 is degraded into heterogeneously sized fragments by both hyaluronidases (HYALs) and cell metabolism by–products such as reactive oxygen and nitrogen species (ROS/NOS). HYALs are hyalurono–glucosidases that cleave the beta–(1,4) linkage between N–acetylglucosamine and glucuronate [31]. The human genome encodes HYAL1–HYAL5 and one pseudogene (HYAL6). Out of these, HYAL1 (present in lysosomes) is mainly responsible for HA degradation into oligo–, di–, and monosaccharides while HYAL2 (localized to the cell surface via a GPI linker) degrades HA into fragments of about 20 kDa. These HYAL2-created fragments are either released into the microenvironment or internalized by HA receptors such as CD44 to be further degraded by HYAL1 [32][33][34]. Two additional proteins with hyaluronidase activity have more recently been discovered that process HA into intermediate-sized LMW fragments: the transmembrane protein TMEM2 [35] and KIAA1199 (CEMIP, HYBID) [36]. TMEM2 is a widely expressed membrane protein that can digest native HA into 5kDa fragments [35]. Pro–inflammatory cytokines that are released early in cutaneous repair such as IL–6, regulate KIAA1199, which is expressed by activated skin fibroblasts [37] and macrophages [38][39][40]. IL–6 and the resulting HA fragments [25][41] promote leukocyte infiltration into the wound.

To date, characterized HA receptors include CD44 [42], RHAMM (HMMR) [19], LYVE1 [43], TLR4 [26][44], STAB2/HARE [45], and LAYN [37]. CD44, LYVE1, and STAB2/HARE bind to HA via link modules [42][46]. In contrast, the HA binding domain of RHAMM has been localized to alpha-helical clusters of positively charged residues [47][48]. TLR2 and 4 contain similar clusters of positively charged amino acids as RHAMM, and are required for responses to HA fragments but there is controversy as to whether or not they directly bind to this polysaccharide [46]. LAYN has been shown to bind directly to HA but contains neither link module nor clusters of positively charged amino acids, and the sequences responsible for this interaction have presently not been reported [5][25].
Although CD44 and RHAMM clearly differ in key biochemical and structural properties, some commonalities include a likely evolution from heparin-binding ancestors, complex functions due to isoform expression generated by alternative mRNA splicing, and coordinated intracellular and extracellular functions. CD44 is a non–kinase cell surface HA receptor that contributes to the proliferation, migration/invasion, adhesion, polarity, plasticity, and differentiation of many cell types, including resident skin cells [49][50]. CD44 is constitutively and widely expressed in tissues such as skin, and binds to HMW, LMW, and O–HA via a link module, which is distinct from the HA binding sequences of RHAMM [47][51]. The signaling properties of CD44 result not only from its association with HA polymers but also from its interactions with other cell surface and extracellular proteins (e.g., growth factor receptors, osteopontin, metalloproteinases, and collagens) [52]. The small, intracellular domain (ICD) of CD44 additionally binds to adaptor and cytoskeletal proteins [53]. The binding of HA polymers to CD44 promotes homotypic CD44 clustering that can activate or impede oncogenic signaling cascades depending upon the HA polymer size and its partnering with other proteins. As an example, HMW–HA activates tumor-suppressive Hippo signaling by clustering CD44, which recruits polarity–regulating kinase (PAR1b) to the intracellular domain of CD44 and leads to activation of Hippo signaling [54].
In contrast to CD44, RHAMM expression is low and primarily intracellular in most homeostatic tissues but its expression and extracellular export increase with pathologic stress, injury, and neoplastic transformation [8]. Under injury conditions, small amounts of intracellular RHAMM are released from cells, which bind to LMW and O–HA via alpha–helical clusters of positively charged amino acids [8][47][55]. The three–dimensional organization of these clusters is similar to those located in the alpha–helical glycosaminoglycan binding sites of lectins (e.g., GRO cytokines) [56][57]. RHAMM: HA complexes associate with integral HA receptors such as CD44 and TLR4 to activate signaling cascades (Figure 2), initiating an early response–to–injury through the NRLP3 inflammasome and other signaling cascades [21][25][26]. The functional and physical association of RHAMM with CD44 is influenced by the presentation of HA polymers in both soluble and ECM–immobilized form [58]. These interactions regulate cell motility and gene expression. The intracellular functions of RHAMM are complex,  multifunctional, and include regulation of microtubule stability, mitotic spindle dynamics, intracellular signaling complexes, and gene transcription (Figure 2). A collective study of CD44 and RHAMM signaling predicts that binding preferences for HA polymer sizes (which regulate receptor clustering), as well as the mode of HA presentation, are two mechanisms for how cells detect and differentially signal in response to HMW–, LMW–, and O–HA polymers. 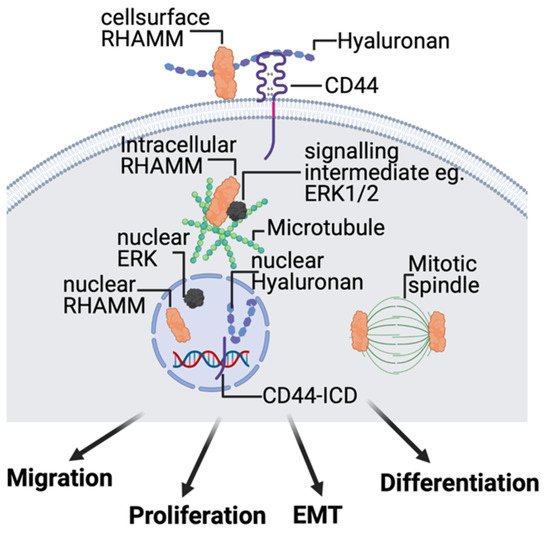 Figure 2. HA receptors CD44 and RHAMM regulate signaling that controls skin cell migration, proliferation, plasticity, and differentiation during response–to–injury. CD44 is an integral membrane protein that coordinates signaling through integral growth factor receptors (e.g., EGFR) and cell surface RHAMM. The intracellular domain (ICD) of CD44, which can be released under injury conditions, forms part of transcriptional complexes that regulate the expression of injury response genes. RHAMM also occurs in multiple intracellular compartments including the microtubule and actin cytoskeleton and, like CD44, is a component of transcriptional complexes regulating the expression of extracellular matrix proteins required for wound repair. Created with BioRender.com (accessed on 12 September 2021).