Despite the initial skepticism and reluctance by hepatobiliary surgeons, laparoscopic liver surgery (LLS) is currently considered a safe and efficient mainstream approach for the treatment of benign and malignant liver tumors [1][2]. LLS is considered a valid alternative to the traditional open approach for a plethora of lesions in selected patients [3][4][5][6]. With gradual accrual of experience, certified hepatobiliary surgeons with a strong background in the field of minimally invasive approaches are able to safely and efficiently perform major and complex laparoscopic liver resections [3][7][8][9]. Widely performed complex procedures include resections in posterosuperior segments, combined resections with radical lymph node dissection, repeat laparoscopic liver resections andlaparoscopic liver retrievals for live donor liver transplantation [5][9][10][11][12].
Resection of the caudate lobe of the liver is considered a highly challenging type of liver resection due to the region’s intimacy with critical vascular structures and its deep anatomic location inside the abdominal cavity even via the traditional open approach [13]. Laparoscopic resection of the caudate lobe is likewise considered one of the most challenging procedures through the laparoscopic approach and is part of the “difficult” posterosuperior segments along with segments IVa, VII and VIII [9][14]. Laparoscopic caudate lobectomy (LCL) is only carried out in few experienced centers and only a small number of case reports and case series have been published so far.

We comprised a total of 221 patients, 36% of whom were women, with ages ranging between 20 and 76 years. The majority of resections, 147 out of 221 cases, representing 63%, were performed for malignant tumors, whereas the remaining 74 cases were carried out for benign pathology. Ishizawa et al. did not specify the lesion pathology of the threereported undertaken resections. Of the resected malignant lesions, 61 were metastatic, the vast majority being colorectal liver metastases, 69 were hepatocellular carcinomas, 3 were intrahepatic cholangiocarcinomas, 2 were perivascular epithelioid cell tumors (PEComas), 1 was aninflammatory pseudotumor-like follicular dendritic cell sarcoma (IPT-like FDC sarcoma), andthe 10 remaining cases were not histologically specified.
Tumor size varied significantly from 2mm to 160 mm in the largest diameter. All included studies reported excision of a single tumor from segment I, while Araki et al. reported simultaneous excision of two tumor foci within the same specimen, and Peng et al.reported two cases of multiple foci within the caudate lobe.
Analysis of perioperative outcomes for patients undergoing LCL revealed a mean operative time of 210 min (range 60–740min). The reported median estimated blood loss (EBL) was 173.6 mL (range 50–3600 mL). Only seven cases of conversion amidst 221 laparoscopic caudate lobe resections were reported, representing 3.1%, while resection margins were found to be positive (R1) in fourteen cases (6.3%). Out of these 14 cases, 10 originate from Capelle et al., where tumors detached from major vessels were considered as R1 vascular [15].
Of 221 patients, 36 developed postoperative complications, 23 of which were minor classified as Clavien–Dindo grade I–II, and 13 were major (CD III or greater) [16]. Minor complications included two cases of postoperative diarrhea, one case of liver failure, two cases of ascites and one of ileus resolving conservatively. Xu et al., Ishizawa et al. and Patrikh et al. each reported a case of bile leakage. Araki et al., aside from the case of ileus CD I-II, reported twomore cases with major complications. More specifically, there was a case of biliary stenosis (CD IIIa) successfully treated by endoscopic stenting and a further one of pancreatic fistula (CD IIIb) resulting in reoperation for the definitive management of this complication. Peng et al. reported a case of liver failure considered to be a major complication. In the case series by Sun et al., fluid collection in the surgical area was the most common complication because of the anterior hepatic transection approach this group undertook to resect lesions originating in the caudate lobe. The median hospital length of stay (LOS) was 6.5 days (range 2–15 days).

Though most of the studies reported a limited follow-up time of 90 days postoperatively, focusing solely on postoperative morbidity and not overall survival (OS) and disease-free survival (DFS), Oh et al. reported a median follow up time of 54.6 months, during which 2 out of 4 patients (50%) showed tumor recurrence. Patrikh et al. reported a rate of 42.9% of 5-year disease-free survival and a 76.2% of 5-year overall survival rate. There was one case of lesion recurrence at segment VIII 55 months following LCL, which was treated with radiofrequency ablation (RFA) and a case of carcinomatosis 9 months after the initial resection, treated with adjuvant systemic chemotherapy. The median follow-up time among other studies (Cheung, Wan et al., Dulucq et al., Ho et al., Li et al. and Chen et al.) reached 7.5 months during which no disease recurrence was detected (12, 6, 7, 1, 8 and 13), whereas Patrikh et al. reported the longer follow-up period extending up to 43 months. No deaths were reported in any of the studies in the postoperative observation period (Table 1).
Table 1. Long-term outcomes.
Abbreviations: a, median (range); c, 5-year survival; n/a, not available.

LCL is a safe and efficient alternative to open resection for selected patients when performed by experienced hepatobiliary surgeons. This minimally invasive approach combines a low overall morbidity rate of 16.3%, as well as low mortality. Comparative studies also substantiate these outcomes, reporting lower morbidity between laparoscopic and open caudate lobectomy. Moreover, aside from being a safe alternative, is also efficient, with a 98% rate of R0 resections and a 3.1% rate of conversion to open.

Resections of primary and metastatic lesions located within the caudate lobe are considered technically challenging, due to its deep intra-abdominal location and proximity to major vascular structures. The caudate lobe entails three distinct subsegments: (a) Spiegel’s lobe, located behind ligamentum venosum and on the left of the inferior vena cava (IVC); (b) the caudate process, extending to the left and useful in traction of the caudate lobe; and (c) the paracaval portion (Couinaud’s segment IX) corresponding to the dorsally located hepatic tissue in front of the inferior vena cava. Left and right portal veins, along with the hilar bifurcation area, provide the branches supplying the caudate lobe subregions, while short hepatic veins drain blood directly to the IVC [28][29].

Resection of the caudate lobe remains one of the most demanding resections, even through the open approach, while proper management of the short hepatic veins is of cardinal importance. Laparoscopy offers caudal-to-cephalad vision, which results in better exposure and control of the short hepatic veins. Other advantages include proper staging and determination of resectability since tumor seeding, and occult liver and lymph node metastases are identified intraoperatively [30][31]. However, laparoscopy poses a risk of massive intraoperative bleeding occurring from the anterior IVC, which may occur when dealing with tumors larger than 5cm, potentially invading the IVC and found close to the hilum or major hepatic veins [32]. In these situations, obtaining an adequate resection margin, despite laparoscopy’s aforementioned advantages, can be challenging.

There are three different approaches for isolated laparoscopic excision of the caudate lobe described in the literature including the left, right and anterior trans parenchymal, each chosen depending on the tumor size and location (Figure 1) [33]. Decision on which approach is more suitable is made based on tumor localization and size. The right-sided approach is usually reserved for bulky tumors. Taking into consideration that this approach requires a complete rotation of the right lobe to the left in order to expose the caudate hepatic veins, it is quite difficult to perform laparoscopically. The left-sided approach on the other hand is preferred for smaller-size tumors located in the Spiegel process or paracaval portion. Lastly, the anterior trans parenchymal approach includes the performance of retrohepatictransparenchymal resection and suspension of the right lobe [33]. It is furthermore recommended by several authors as a preferred alternative for lesions exceeding 4cm in diameter, or lesions involving critical vascular structures such as the inferior vena cava IVC and short hepatic veins. From a technical standpoint, it prevents hepatic rotation and subsequent venous rupture, making it feasible to dissect the liver parenchyma along the IVC [30]. 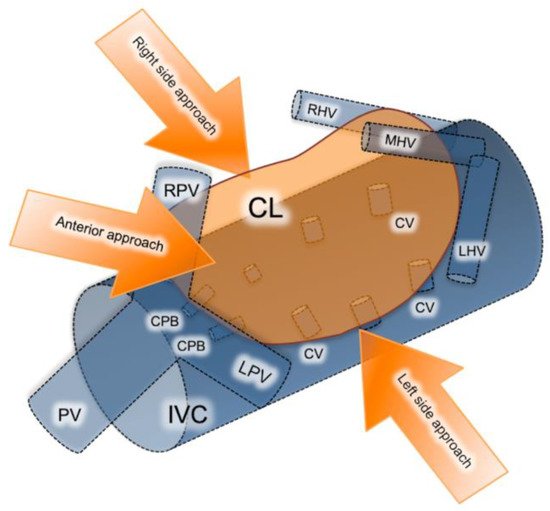