Nonalcoholic fatty liver disease (NAFLD) is the most common chronic liver disease globally, representing a significant health burden worldwide. Briefly, NAFLD includes a broad range of conditions, including simple steatosis and nonalcoholic steatohepatitis (NASH) [1]. The pathophysiology of NASH is multifactorial, involving genetic and epigenetic factors, insulin resistance, adipose-derived hormones, and nutritional factors [2]. The most potent driver of NASH is lipotoxicity-induced hepatocyte death, which triggers inflammation and fibrosis, leading to cirrhosis or liver cancer.
After menopause, women have an increased risk of insulin resistance, hyperlipidemia, and visceral fat accumulation, all of which are known risk factors of NAFLD [3]. A higher incidence of NAFLD is found in postmenopausal women than in premenopausal women, as estrogen inhibits stellate cell activation and fibrogenesis, suggesting a correlation with the progression of NAFLD/NASH [4].
Soy-based foods, which are largely consumed in Asian countries, have become popular in non-Asian countries because of their beneficial effects on health. Equol, which is produced by the gut microbiota in the gastrointestinal tract, is a metabolite of daidzein, a major isoflavone found in soybean [5]. Equol has been reported to exert estrogenic activity, with an affinity for both ER alpha and ER beta estrogen receptors. Equol is superior to all other isoflavones in terms of its antioxidant activity [6]. As the production of equol depends on the presence of certain intestinal microflora, not all individuals have the ability to produce equol from the metabolism of isoflavones [7]. Only 25–30% of the adult population in Western countries can produce equol after consuming soy-based foods containing isoflavones [8][9][10]. This percentage is significantly lower than the reported 50–60% frequency of equol-producers in adults from Japan, Korea, and China [11][12][13], or Western adult vegetarians [14]. Usui et al. reported that the ratio of equol nonproducers in overweight or obese Japanese women was lower than the generally reported range [15]. Yoshikaka et al. reported that equol production was significantly associated with lower arterial stiffness and uric acid levels, and a high ratio of eicosapentaenoic acid to arachidonic acid in women in their 50s [16]. As NAFLD/NASH has been associated with both the visceral fat area and metabolic syndrome, and the incidence of NAFLD/NASH is known to increase after menopause in women, the ability to produce equol is expected to be related to the pathogenesis of NAFLD/NASH; however, to date, no relationship has been reported between them.
Otsuka Long-Evans Tokushima fatty (OLETF) rats develop multiple metabolic and hormonal abnormalities that have similar features as obesity in humans [17][18]. OLETF rats spontaneously develop obesity, hypertriglyceridemia, hyperglycemia, hyperinsulinemia, and insulin resistance. 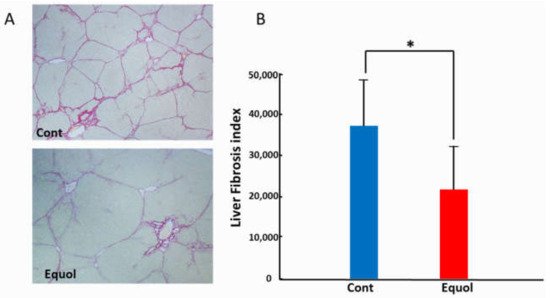 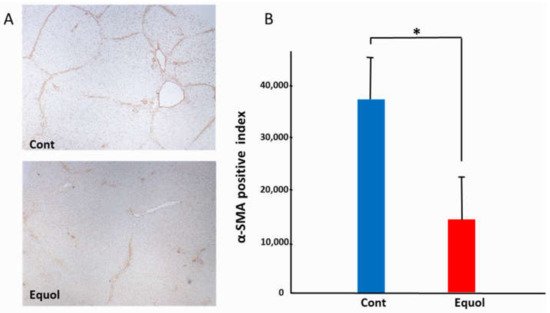 Figure 2. Effect of equol on the activated hepatic stellate cells (HSCs) in the OLETF rats. (A) Representative αSMA immunohistochemistry in OLETF rats (original magnification, ×40). (B) Semi-quantitative analysis of the αSMA-positive HSCs. The αSMA-positive cells were significantly suppressed by treatment with SE5-OH. Data represent the mean ± SD values. * p < 0.01, indicating a significant difference between groups.

Although the exact amount of soy products consumed is unknown, all NAFLD participants were in the habit of consuming soy products. We found that the number of equol nonproducers was 23 out of 38. The urine equol of all nonproducers was below the limit of quantitation. The prevalence of diabetes was shown to be significantly lower in nonproducers than in producers. We did not detect any significant differences in any of the other parameters tested between the two groups (Table 1). When subjects were stratified by sex, seven male (53%) and eight female (32%) patients were identified as equol producers. No significant differences were detected in any of the tested parameters between nonproducers and producers in men. We observed, however, that in women, the prevalence of diabetes was significantly lower, whereas the prevalence of dyslipidemia was higher, although not significantly different (p = 0.054) in nonproducers compared to producers (Table 2). Among nonproducers, fourteen patients (82.4%) were menopausal, two had irregular menstruation and one had amenorrhea. Among the producers, seven patients (87.5%) were menopausal, and the other was 46 years old and had undergone a total hysterectomy. There was no significant difference in the frequency of menopause between producers and non-producers. The mean age at menopause was 47.6 ± 6.2 years for nonproducers and 51.4 ± 1.0 years for producers, with no significant difference between them.
Table 1. Clinical characteristics of equol nonproducers and producers.
Values are n (%) or mean ± standard deviation. BMI, body mass index; AST, aspartate aminotransferase; ALT, alanine aminotransferase; HOMA-IR, homeostasis model assessment-insulin resistance, type III procollagen peptide; P-III-P, the aspartate aminotransferase to platelet ratio index; APRI, below the limit of quantitation; BLQ.
Table 2. Comparison of clinical characteristics between equol nonproducers and producers stratified by sex. 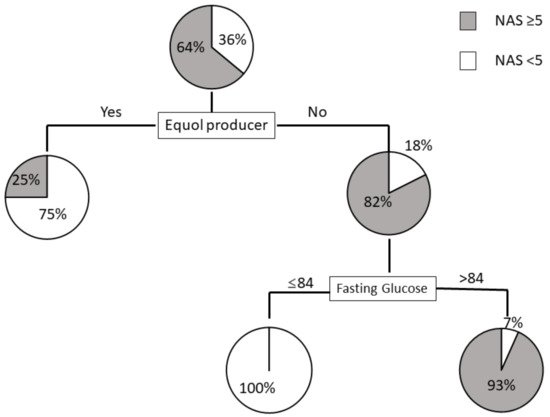