Inflammation is the body’s self-protective response to multiple stimulus, from external harmful substances to internal danger signals released after trauma or cell dysfunction. Many diseases are considered to be related to inflammation, such as cancer, metabolic disorders, aging, and neurodegenerative diseases.  Xanthones, a unique scaffold with a 9H-Xanthen-9-one core structure, widely exist in natural sources. Till now, over 250 xanthones were isolated and identified in plants from the families Gentianaceae and Hypericaceae. Many xanthones have been disclosed with anti-inflammatory properties on different models, either in vitro or in vivo.

Inflammation is a kind of active defense reaction of organisms to external stimulations, such as infectious microorganisms, or internal processes, such as tissue injury, cell death, and cancer [1][2][3]. However, long-term low-grade inflammation leads to many human diseases, including aging, metabolic disorders, cancer, and neurodegenerative diseases [4][5][6][7]. Thus, the discovery of anti-inflammatory medicines has been and is continuing to be one of the hotspots of pharmaceutical research.
Currently, anti-inflammatory therapy mainly includes non-steroidal anti-inflammatory drugs (NSAIDS) and glucocorticoids, both of which possess various side effects, such as cardiotoxicity, hepatotoxicity, and immunological dysfunction [8][9]. Natural products have attracted increasingly more attention due to their safety and effectiveness [10]. Emerging evidence indicates that natural products always function as multi-component and multi-target patterns [11]. Naturally occurring anti-inflammatory compounds might be promising candidates for the treatment of enteritis, arthritis, and skin inflammation. Xanthones were firstly isolated in 1855 by a German scientist pursuing research on dysentery and then named by the Greek word for yellow, xanthos [12]. Xanthones possess a unique 9H-Xanthen-9-one scaffold (Figure 1), which mainly occurs in the plants of the families Gentianaceae and Hypericaceae, as well as some fungi and lichens [13]. Several types of xanthones have been identified, including simple oxygenated xanthones, xanthone glycosides, prenylated xanthones, xanthonolignoids, and miscellaneous [14]. The studies of xanthone are provoking not only due to the structural diversity but also a variety of pharmacological activities. Many xanthones have been reported with potent anti-inflammatory properties [15][16][17][18][19]. 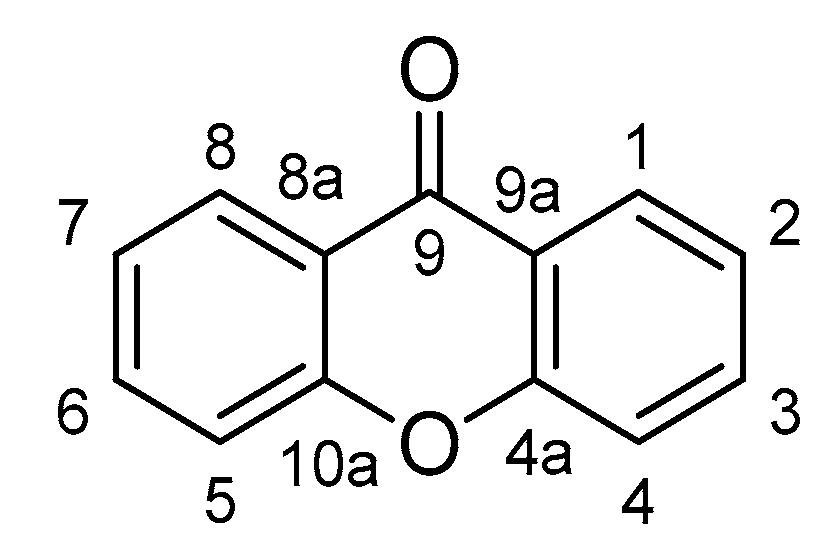 Figure 1. The core structure of xanthone.

Using the keywords xanthone and inflammation, we collected data from Google Scholar, Web of Science, Scopus, and Pubmed. A total of 44 xanthones were found with anti-inflammatory properties, containing 6 simple oxygenated xanthones (1–6), 2 xanthone glycosides (7, 8), 33 prenylated xanthones (9–41), and 3 xanthonolignoids (42–44) (Figure 2). Many models, either in vitro or in vivo, have been recruited to evaluate the anti-inflammatory properties of xanthones. To organize the review, the xanthones were classified based on bioassays (Table 1). 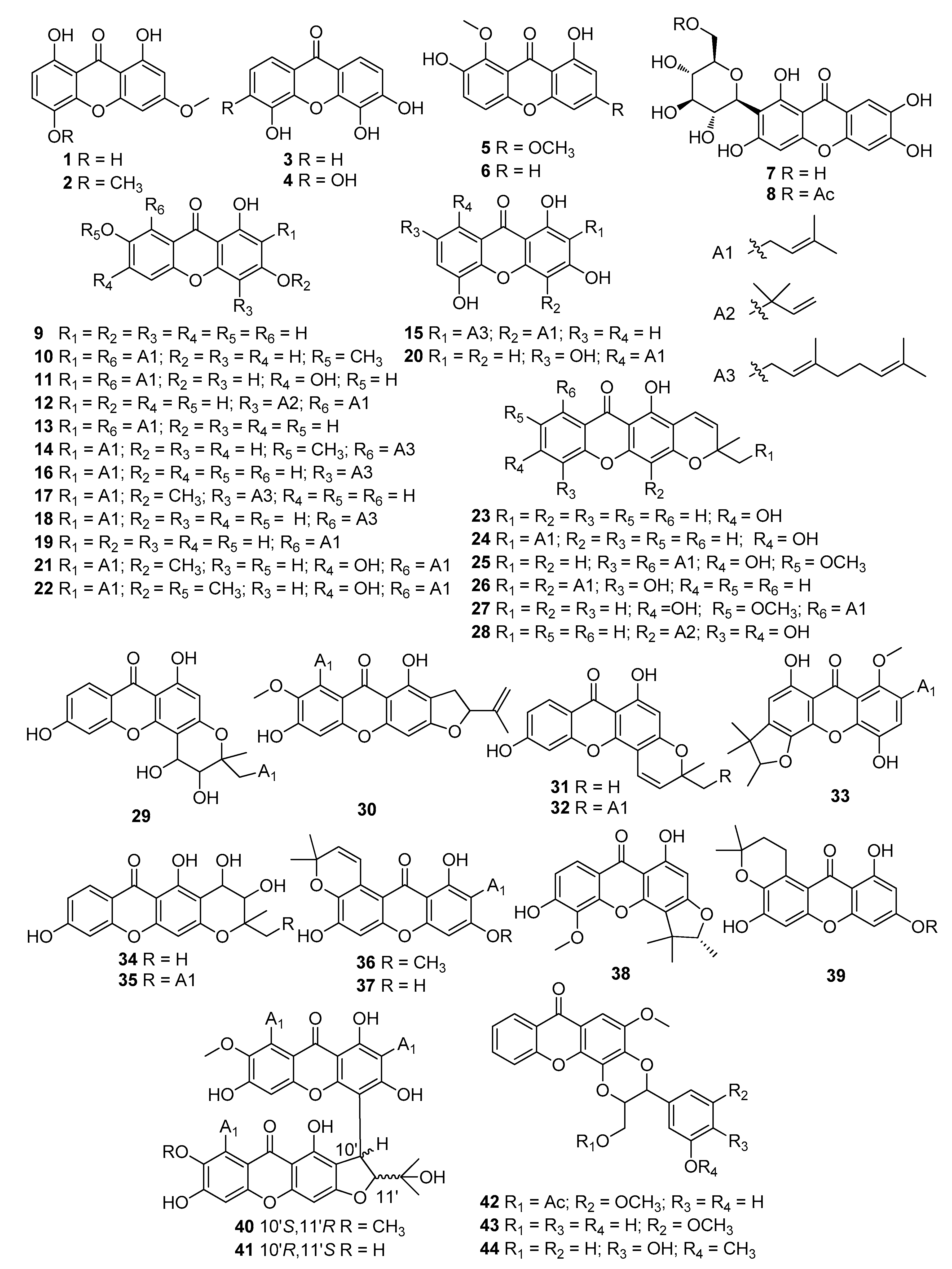 3. Comparison of the Drug Likeness of Anti-Inflammatory Xanthones with Marketed Drugs

Swiss Institute of Bioinformatics provides SwissADME to calculate molecular descriptors of the identified anti-inflammatory xanthones [61]. For each compound, the following descriptors were calculated: Molecular weight (MW); number of stereogenic centers; number of hydrogen bond acceptors (HBA) and donors (HBD), described as the electrostatic bond between a hydrogen and a lone pair of electrons; number of rotatable bonds (RB); number of rings; fraction of sp3 carbons (Fsp3) defined as the ratio of sp3 hybridized carbons over the total number of carbons; and fraction of aromatic heavy atoms (Far), defined as the number of aromatic heavy atoms divided by the total number of heavy atoms [62] (Figure 3). 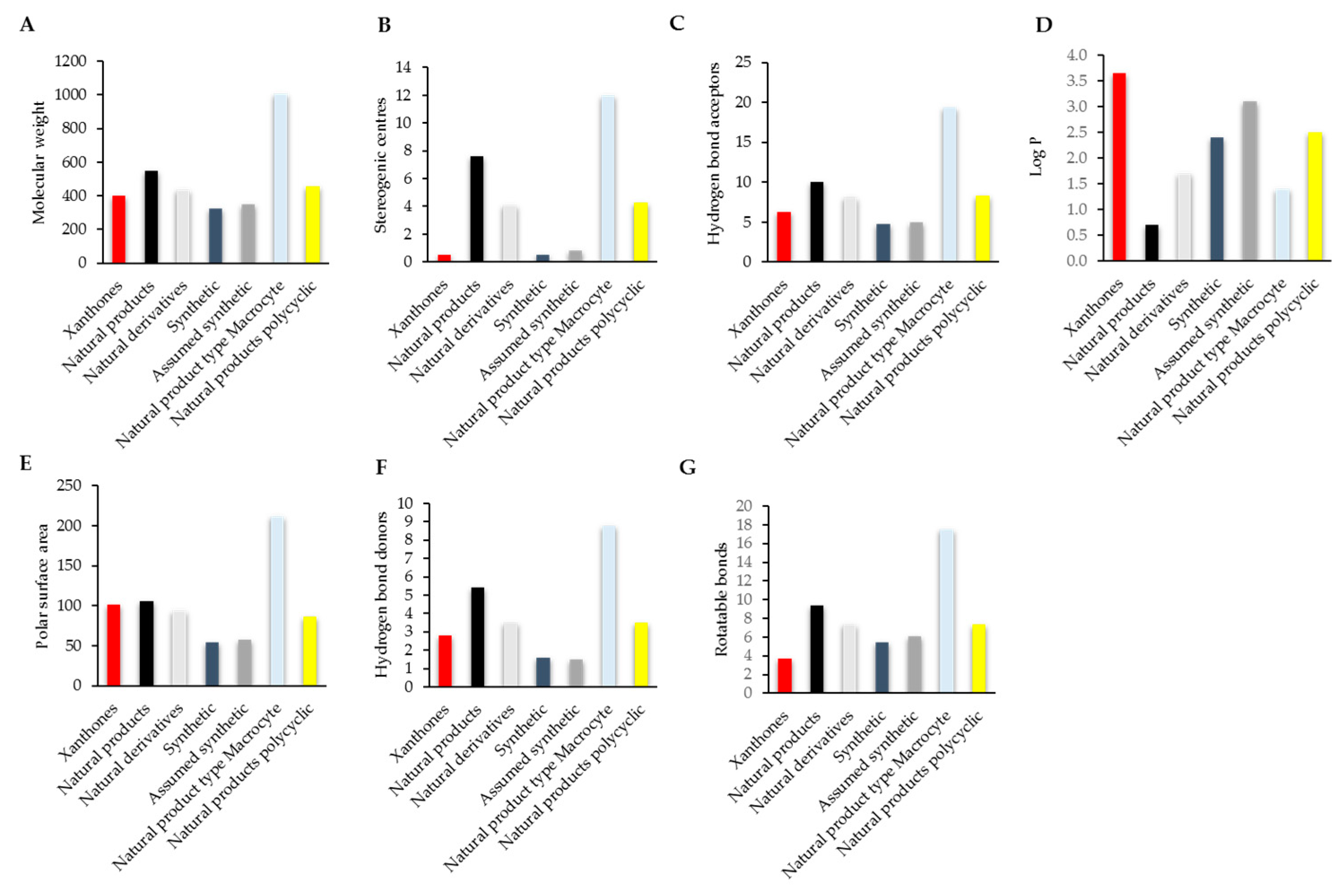 4. Compliance of Xanthones with the Rules of Drug Likeness

In order to quickly eliminate lead candidates that have poor physicochemical properties for oral bioavailability, the five rules of drug likeness have been widely adopted in the pharmaceutical industry, which helps to predict the in vivo behavior of potential drugs [63]. The biophysicochemical properties and molecular descriptors of the anti-inflammatory xanthone derivatives were framed as different rules of compliance. Most anti-inflammation xanthone derivatives appear to have a good drug likeness.