Euphausia pacifica (E. pacifica) (Figure 1A), also called North Pacific krill, is a small, red crustacean similar to shrimp that flourishes in the North Pacific Ocean and is eaten in Japan. E. pacifica has large amounts of 8-hydroxyeicosapentaenoic acid (8-HEPE), which has physiological effects. This review discusses the chemical features of E. pacifica and the potential benefits of 8-hydroxyeicosapentaenoic acid (8-HEPE) extracted from E. pacifica against metabolic syndrome, dyslipidemia, NAFLD, and atherosclerosis in mice under the condition of a high-fat diet (HFD) or Western diet (WD).

Methanol extract from E. pacifica activates the transcription of peroxisome proliferator-activated receptor alpha (PPARα), PPARγ, and PPARδ [2]. In addition, 5-HEPE, 8-HEPE, 9-HEPE, 12-HEPE, and 18-HEPE (hydroxylation products of EPA) obtained from methanol extracts of E. pacifica act as PPAR ligands. Two of these products, 8-HEPE and 9-HEPE, enhance the transcription levels of PPARs to a significantly greater extent than 5-HEPE, 12-HEPE, 18-HEPE, EPA, or EPA ethyl ester in NIH-3T3 cells [2]. In fact, 8-HEPE activates the transcription of PPARα, PPARγ, and PPARδ to levels 10, 5, and 3 times greater than EPA, respectively. 8-HEPE also increases the expression levels of genes regulated by PPARs, such as liver fatty-acid-binding protein, enoyl-CoA hydratase/3-hydroxyacyl CoA dehydrogenase, and carnitine palmitoyltransferase, in FaO cells. In contrast to 8-HEPE, EPA at the same concentration has weak or little effect on these gene expression levels and functions, indicating that 8-HEPE is the more potent inducer of physiological effects.

3. Potential Benefits of 8-HEPE Extracted from E. pacifica against NAFLD and Its Associated Diseases

3.1. Effects of 8-HEPE Extracted from E. pacifica on Metabolic Syndrome

Metabolic syndrome is the medical term for a combination of diabetes, hypertension, and obesity and causes dyslipidemia and fatty liver. Moreover, it is associated with greater risk of developing blood vessel diseases, such as coronary heart disease and stroke. The activation of hepatic PPARα could ameliorate body weight gain and improve insulin sensitivity in HFD-fed obese mice [3]. Moreover, adipocyte hypertrophy and the functional disorder of adipose tissue, such as reduced adiponectin secretion, have been reported to be associated with obesity [4]. 8-HEPE (9.5 mg/kg) extracted from E. pacifica reduced the amount of visceral fat (Figure 2A) [5], gonadal white adipose tissue, and the size of gonadal adipocyte cells in HFD-fed mice [6]. PPARα activators can increase hepatic fatty acid oxidation and decrease serum TAG levels, which are responsible for adipose cell hypertrophy and hyperplasia, leading to the regulation of obesity. Compared to EPA, 8-HEPE, which is a potent activator of PPARα, might improve metabolic syndrome. 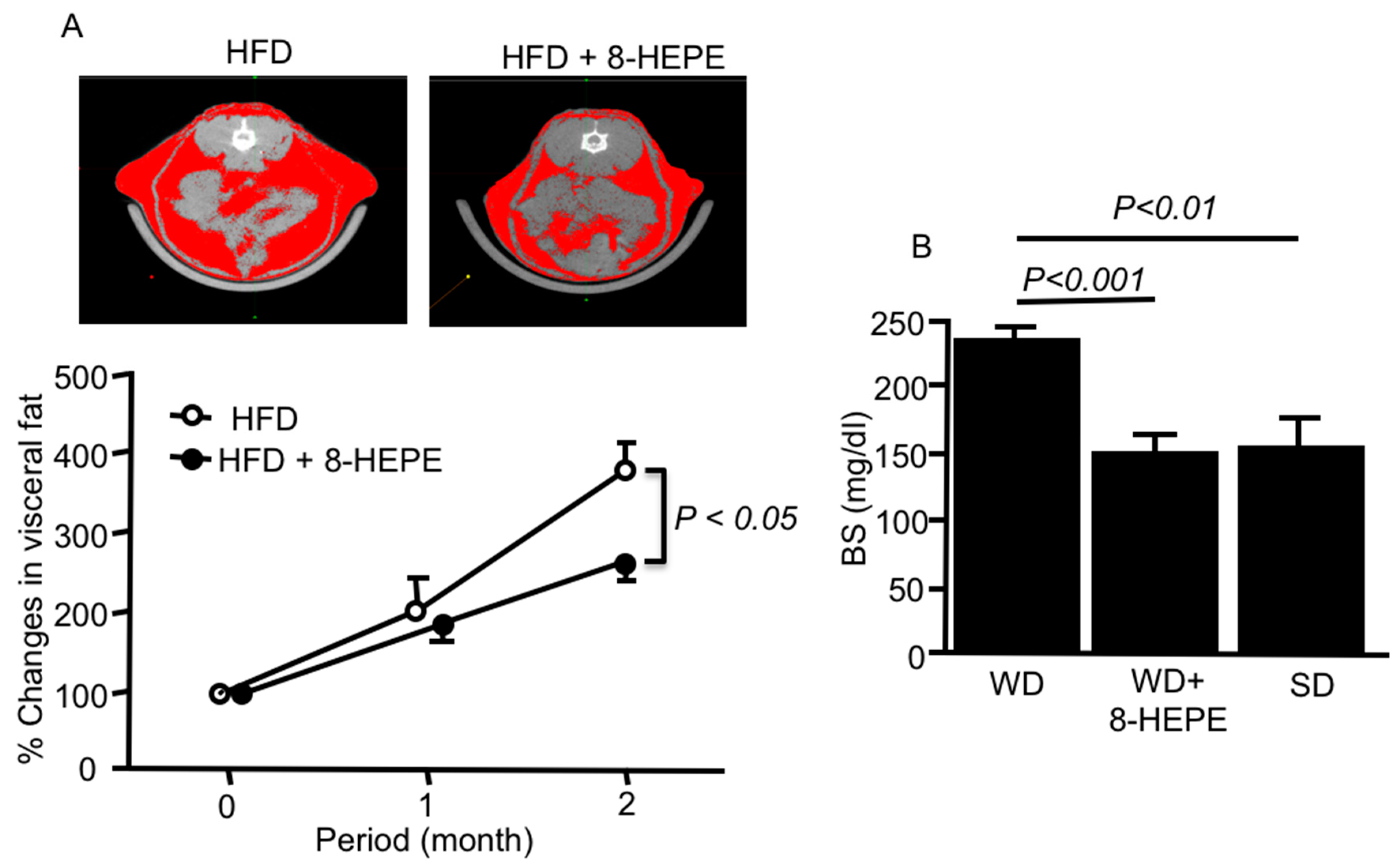 Figure 2. (A) Representative computed tomography images of the abdomen (upper) and percentage changes in visceral fat area (lower) in mice fed an HFD only or an HFD with 8-HEPE. Visceral and subcutaneous fat areas are shown in red. Data are the mean ± SE obtained from eight mice for each group. (B) Blood sugar (BS) in apoE knock-out (apoE-KO) mice fed a WD only or WD with 8-HEPE. Data are the mean ± SE obtained from 10 mice for each group. An analysis of variance (ANOVA) with Dunnett’s test was used for the statistical analysis. HFD, high fat diet; 8-HEPE.

3.2. Effects of 8-HEPE Extracted from E. pacifica on Dyslipidemia

Dyslipidemia is defined by abnormal levels of plasma lipoproteins and TAG, and several types are known. Furthermore, dyslipidemia causes several complications, such as NAFLD and atherosclerosis, and its improvement is important for preventing these complications. Fibrates are an important group of drugs used to treat dyslipidemia in clinical practice. They are agonists of PPARα, which plays important roles in the normalization of plasma lipoproteins and TAG levels. GW590735, a PPARα agonist, increased HDL cholesterol and decreased LDL cholesterol, very low-density lipoprotein (VLDL) cholesterol, and TAG in hApoB100/hCETP mice [7]. Plasma TAG levels were significantly decreased in mice fed an HFD with 10 mg/kg 8-HEPE compared with HFD with EPA or HFD alone [6]. In contrast, plasma total cholesterol levels were similar between mice fed an HFD with 10 mg/kg 8-HEPE and HFD only [6]. Interestingly, 8-HEPE (83 mg/kg) suppressed the WD-induced increases in plasma LDL cholesterol in LDL cholesterol receptor knock-out (LDLR-KO) mice [8]. Moreover, it also increased plasma HDL cholesterol levels in WD-fed LDLR-KO mice. These results suggest that a low dose of 8-HEPE is enough to suppress plasma TAG, but a high dose of 8-HEPE might be needed to decrease plasma LDL cholesterol. Although n-3 PUFAs, especially EPA and DHA, play a positive role in the treatment of dyslipidemia [9], these beneficial effects are considered to be mainly due to the ability of n-3 PUFAs to reduce plasma TAG levels [10]. ATP-binding cassette transporter A1 (ABCA1) transports phospholipids and free cholesterol from macrophages to lipid-free apoA-I [11][12], leading to the generation of HDL particles [13][14]. 8-HEPE, but not EPA, increased the gene expression of ABCA1 in murine OxLDL-treated J774.1 macrophages [8].

3.3. Effects of 8-HEPE Extracted from E. pacifica on NAFLD

Excessive calorie intake and lack of exercise have contributed to increased obesity and the prevalence of NAFLD in recent years. NAFLD is now the most important cause of chronic liver disease in the absence of excess alcohol consumption. NAFLD includes hepatic steatosis, which may progress to nonalcoholic steatohepatitis (NASH), fibrosis, and cirrhosis. Hepatic steatosis is characterized by the accumulation of TAG lipid droplets in the hepatocyte cytoplasm. Nonesterified fatty acids derived from the plasma are transported into the liver via transport proteins, such as CD36, which causes hepatic TAG accumulation. CD36 is expressed in a variety of cells, such as macrophages, and tissues [15]. Hajri et al. [16] showed that the deletion of nonhepatic CD36 gene expression causes hepatic steatosis and reduces muscle TAG contents in mice. Oil Red O histological staining, a marker of fat accumulation in the liver, was reduced in the liver of LDL-KO mice fed a WD with 83 mg/kg 8-HEPE compared with WD alone [8]. The content of TAG in the liver was also decreased in the WD with 8-HEPE than WD alone in these mice, suggesting that 8-HEPE can improve hepatic steatosis. We showed that 8-HEPE (50 μM) significantly increased CD36 gene expression in OxLDL-treated murine J774.1 macrophages [8]. This effect may improve hepatic steatosis through the relative increase in fatty acid uptake from plasma into the macrophages compared to the liver.

3.4. Effects of 8-HEPE Extracted from E. Pacifica on Atherosclerosis

Figure 3. Representative images of the aorta (left) stained with Sudan IV and percentage lesion area of atherosclerosis (right) in apoE-KO mice fed a Western diet (WD) only or a WD with 8-HEPE (WD + 8-HEPE). Data are the mean ± SE obtained from eight mice for each group. An analysis of variance (ANOVA) with Dunnett’s test was used for the statistical analysis. SD, standard diet; NS, not significant.