Intracellular calcium (Ca2+) concentration ([Ca2+]i) is a key determinant of cell fate and is implicated in carcinogenesis. Membrane ion channels are structures through which ions enter or exit the cell, depending on the driving forces. The opening of transient receptor potential vanilloid 1 (TRPV1) ligand-gated ion channels facilitates transmembrane Ca2+ and Na+ entry, which modifies the delicate balance between apoptotic and proliferative signaling pathways. Proliferation is upregulated through two mechanisms: (1) ATP binding to the G-protein-coupled receptor P2Y2, commencing a kinase signaling cascade that activates the serine-threonine kinase Akt, and (2) the transactivation of the epidermal growth factor receptor (EGFR), leading to a series of protein signals that activate the extracellular signal-regulated kinases (ERK) 1/2. The TRPV1-apoptosis pathway involves Ca2+ influx and efflux between the cytosol, mitochondria, and endoplasmic reticulum (ER), the release of apoptosis-inducing factor (AIF) and cytochrome c from the mitochondria, caspase activation, and DNA fragmentation and condensation. While proliferative mechanisms are typically upregulated in cancerous tissues, shifting the balance to favor apoptosis could support anti-cancer therapies. TRPV1, through [Ca2+]i signaling, influences cancer cell fate; therefore, the modulation of the TRPV1-enforced proliferation–apoptosis balance is a promising avenue in developing anti-cancer therapies and overcoming cancer drug resistance.

1. [Ca2+]i and the Critical Balance between Apoptosis and Proliferation

Molecular mechanisms that mediate cell death and proliferation exist in balance in functional physiological systems. Proliferation is involved in structural development and renewal, while programmed cell death is necessary to eliminate defective cells and prevent uncontrolled growth. Carcinogenesis results from imbalances in the described pathways, which favor proliferation and reduce apoptosis [1][2]. Therefore, anti-cancer therapies shift the balance in the opposite direction by reducing proliferation and upregulating apoptosis.

Apoptosis is defined as programmed cell death, characterized by fragmentation of inter-nucleosomal DNA [3]. Two major mechanisms of apoptosis are an extrinsic, death-receptor mediated mechanism, and an intrinsic, mitochondria-mediated mechanism [4]. The extrinsic mechanism involves the linking of membrane death receptors to adapter proteins, which bind and position pro-caspase 8 for conversion into caspase 8; the intrinsic mechanism is triggered by the release of cytochrome c from mitochondria, which promotes caspase 9 activation [4][5]. The Bcl-2 family of proteins, which includes the proapoptotic proteins Bax and Bak and the antiapoptotic protein Bcl-2, is implicated in the intrinsic mechanism of apoptosis [6]. Both the intrinsic and extrinsic apoptotic mechanisms lead to the activation of caspase 3, which mediates apoptosis through nuclear activity.

Calcium (Ca2+) is a second messenger that influences the proliferation–apoptosis balance. Intracellular Ca2+ ([Ca2+]i) is modulated by receptor-operated, store-operated (SOC), and voltage-sensitive ion channels, ion exchangers, pumps, Ca2+ binding proteins, mitochondrial Ca2+ ([Ca2+]m), and endoplasmic reticulum (ER) and sarcoplasmic reticulum (SR) Ca2+ ([Ca2+]ER and [Ca2+]SR) [7][8]. Intracellular Ca2+ release channels comprise one subset of ion channels; these include the ryanodine receptor (RyR) and inositol 1,4,5-triphosphosphate (IP3) receptor (IP3R) channels, both of which are localized to the ER and SR. RyR channels, which are activated by elevated [Ca2+]i or protein signaling, and IP3R channels, which are activated by IP3 binding, release Ca2+ from the ER and SR. Through [Ca2+]i signaling, these two channel types modulate muscle contraction and nerve impulse transmission [9][10]. Abberant Ca2+ transport from the ER or SR to the cytosol may elevate [Ca2+]m and consequently induce mitochondrial dysfunction [11][12].

Beyond locomotion and neurotransmission, shifts in [Ca2+]i homeostasis may also mediate cell death or proliferation. For instance, while [Ca2+]i signaling via IP3R contributes to proliferation and oncogenesis, RyR [Ca2+]i signaling supports apoptosis in lung cancer cells [10][13]. Furthermore, Ca2+ influx through T-type voltage-gated Ca2+ channels (VGCC) is implicated in the proliferation of cancerous and noncancerous cells, while the blockage of such channels promotes apoptosis in glioblastoma cells [14][15]. In contrast, Ca2+ influx through L-type VGCC causes death in bovine chromaffin cells [16]. Notably, [Ca2+]i-mediated cell death may be apoptotic or necrotic in nature, depending on the time of exposure and [Ca2+] i involved [17].

Significantly, [Ca2+]I signaling regulates proliferation, invasion, and metastasis in cancerous tissues [18]. A variety of oncologic therapies, including cisplatin, arsenic trioxide, trimethyltin chloride, and some candidate epigenetic drugs, induce their proapoptotic and anti-proliferative effects (in part or in whole) through the modulation of [Ca2+]i [19][20]. Therefore, specific [Ca2+]i-affecting proteins, including transmembrane ion channels, which mediate Ca2+ flow between the extracellular space and the cytosol, are potential targets for chemotherapeutic agents.

Transient receptor potential (TRP) channels comprise a large family of membrane Ca2+ channels, which respond to a wide variety of environmental stimuli [21][22][23]. Transient receptor potential vanilloid 1, or vanilloid receptor 1 (TRPV1/VR1), known as the capsaicin receptor, is a member of the TRPV subfamily of TRP channels. TRPV1 is a ligand-gated ion channel which is activated by capsaicin and capsaicin analogues (e.g., resiniferatoxin, RTX), heat, and endogenous cannabinoids such as anandamide (AEA); its antagonists include capsazepine and ruthenium red [24][25]. The stimulation of TRPV1 causes Ca2+ and Na+ influx through transmembrane ion channels. While these channels generally exhibit selectivity for Ca2+ over Na+, the precise nature of this selectivity depends on a variety of factors, including the nature and concentration of the agonist [26]. TRPV1 is involved in thermoregulation, circadian rhythms, energy intake and metabolism, and acute, chronic, and inflammatory nociception; as such, the ion channel receptor is a target in the development of analgesic therapies [27][28][29][30][31][32]. Furthermore, given its role in modulating [Ca2+]i, TRPV1 influences the balance between proliferation and apoptosis [33].

2. Balance Between Apoptosis and Proliferation Mediated by TRPV1

The activation of the TRPV1 ion channel is a critical signal involved in numerous intracellular processes, some of which trigger either apoptosis or proliferation (Figure 1). While the apoptotic effects of TRPV1 are well characterized, literature on TRPV1-related proliferation remains sparse. The binding of exogenous agonists to the TRPV1 receptor and subsequent Ca2+ influx from the cytosol into the cell are characteristics shared between the apoptotic and proliferative pathways. However, both the positive allosteric modulation of cell membrane TRPV1 receptors and the activation of endoplasmic reticulum (ER)-localized TRPV1 channels are associated exclusively with the pro-apoptotic pathway [34][35]. 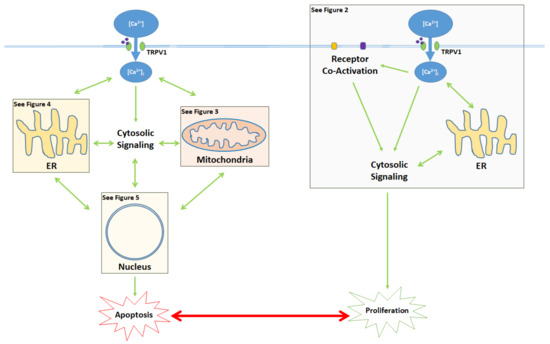 Figure 1. Activation of the TRPV1 ligand-gated ion channel causes Ca2+ influx into the cytosol and influences the balance between proliferation and apoptosis. Apoptotic signaling occurs through the cytosol, mitochondria, ER, and the nucleus. In contrast, the proliferative effects of TRPV1 are mediated by the activation of other cell membrane receptors, ER signaling, and cytosolic protein signaling cascades. The proliferative, proapoptotic mitochondrial, proapoptotic ER, and proapoptotic nuclear signaling mechanisms are highlighted in the colored boxes, and specified in Figure 2 Figure 3 Figure 4 Figure 5, respectively. 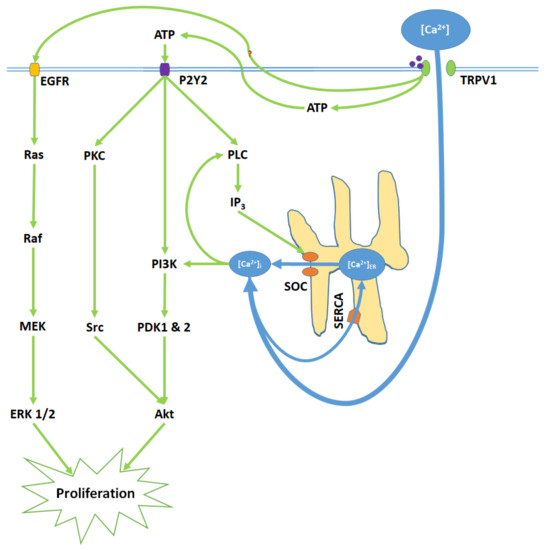 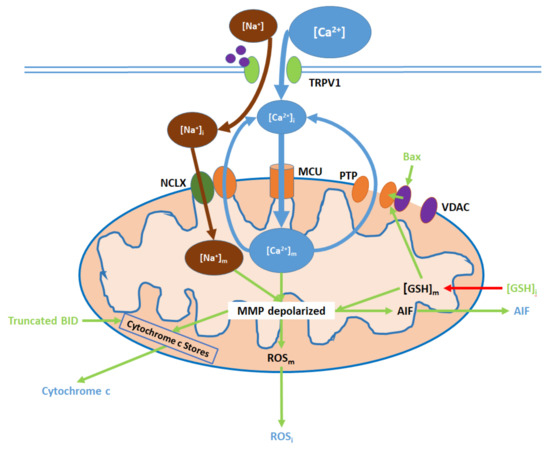 Figure 4. Cell membrane and ER TRPV1 activation promote ER stress through the modulation of [Ca2+]ER, activation of various kinases, the upregulation of nuclear transcription factors, and the release of c-Jun N-terminal kinase (JNK) into the cytosol. TRPV1 proteins localized to the ER membrane contribute only to protein signaling within the ER, while TRPV1 channels in the cell membrane promote both [Ca2+]i and protein signaling. Initial Ca2+ entry into the ER occurs through the sarco/endoplasmic reticulum Ca2+ ATPase 2 (SERCA2) pump, which is eventually blocked, causing net Ca2+ export via the ryanodine receptor 2 (RyR2) channels. Glucose regulated protein 78 (GRP78) upregulation and Bcl-2 downregulation, as inputs, arise from nuclear activity. MAPK is both an input and output of ER stress, as it is upregulated via both mitochondrial activity and JNK. Activating transcription factors 4 (ATF4) and 6 (ATF6) and X-box binding protein 1 (XBP1) are transcription factors that constitute the downstream nuclear targets of ER stress; ATF4, in particular, feeds back to the ER by upregulating GRP78.

Figure 5. Pro-apoptotic processes induced by TRPV1 localized in the nucleus. The nuclear component of ER stress occurs as ATF4, ATF6, and XBP1 are activated by ER stress and upregulate GADD153, which in turn downregulates Bcl-2 protein production. The upregulation of GRP78 by ATF4 feeds back to and enhances ER stress. The cytosolic activation of the ATM serine-threonine kinase by TRPV1 protein signaling and calcineurin by elevated [Ca2+]i promote the nuclear transcription factors E2F1, MYC, and NFAT2, which upregulate p53. The precise mechanism through which TRPV1 activates ATM remains unclear. p53 upregulates the apoptotic mediators Bax, p16, and p21, which activate caspase 9 and 3. Activated caspases translocate from the cytosol to the nucleus, where they mediate DNA fragmentation and condensation.