Bacteriophages are a powerful platform with outstanding potential in the biomedical and chemical engineering field that have been exploited for diverse applications including theranostics, batteries, drug delivery, and vaccine development [1]. Filamentous bacteriophages are single-strand DNA virions belonging to the Inoviridae family, a sub-group of non-lytic, rod-like shaped Escherichia coli viruses with a repeated and ordered capsid structure, and that includes phages f1, fd, and M13. Fd filamentous bacteriophage is a bio nano-fiber with a modifiable surface that is a promising vehicle for antigen expression. A considerable body of data has been accumulated concerning the molecular basis of structural and functional features of fd bacteriophage. Fd bacteriophage genome is intrinsically rich in deoxycytidylate-phosphate-deoxy guanylate (CpG) regions, which can be recognized by toll-like receptors (TLRs). After activation of TLRs, signaling induces the generation of inflammatory signal mediators such as cytokines, and can develop adaptive immune responses without needing any exogenous adjuvant [2].

The fd filamentous bacteriophage antigen display system is a vaccine candidate that is able to induce both innate and adaptive immune responses [4]. Based on a modification of phage display technology, fd bacteriophage was engineered to express exogenous peptides in high copy numbers, as fusions to the N-terminus of viral capsid protein pVIII. Recombinant hybrid virions carry multiple copies of pVIII-containing exogenous sequences interspersed with wild-type pVIII copies on the phage coat. Peptide display on filamentous bacteriophages can be employed to present antigenic peptides to antigen presenting cells (APCs) and thus trigger a strong immune response.

The development of genetically engineered bacteriophage preparations with improved pH resistance [5], embedded in hydrogel microspheres [6] or pH-responsive polymers [7] can ameliorate the stability of filamentous bacteriophage vaccines. Additionally, the encapsulation of virions into appropriate polymeric microparticles can improve the half-life of the bacteriophage by protecting it in harsh environments (e.g., the gastrointestinal tract at low pH, if administered orally). Furthermore, the encapsulation in a biodegradable porous system can modulate the release of bacteriophages, leading to a prolonged stimulation of the immune system over time and increasing the immunogenicity of the phage-based vaccine [8]. In this work, PLGA was used as a biodegradable and biocompatible polymer to fabricate microparticles (MPs) through the water in oil in water (W1/O/W2) double-emulsion/solvent evaporation method [9]. However, for several proteins, it has been shown that the presence of a large interface in double emulsion between aqueous and organic solvents such as dichloromethane (DCM) is responsible for protein degradation during emulsification. Furthermore, there are some mechanical stresses applied during fabrication, including shear stress during mixing and agitation. For this reason, we decided to fabricate empty PLGA microparticles then load bacteriophages into their open porosities, in order to avoid antigen degradation and preserve an intact bacteriophage structure. 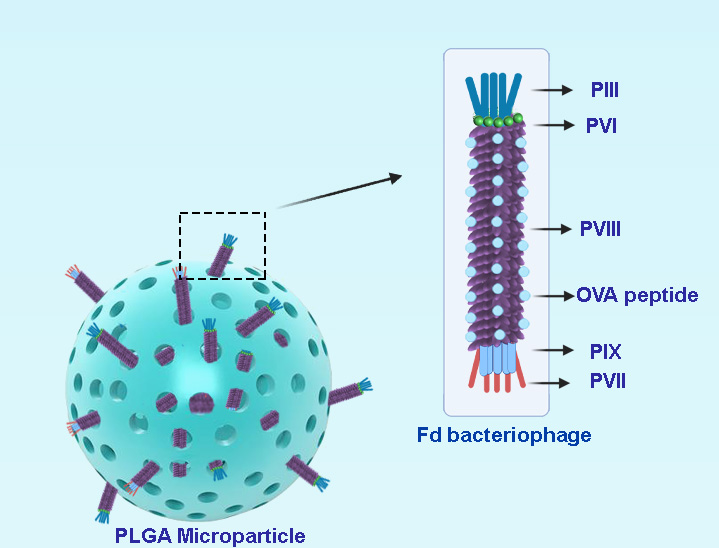 We prepared empty porous MPs of PLGA via water-oil-water double emulsion. Porosities were generated by using ammonium bicarbonate (ABC) in the inner aqueous phase. We generated highly porous empty MPs with an average size of d = 14 µm (Figure 2). In this encapsulation method, filamentous bacteriophages were loaded on the surface of generated empty MPs via incubation at 4 ◦C overnight.

Figure 2. (A) SEM of empty MPs. (B) Size distribution of porous empty MPs.

In summary, we present a fabrication method for encapsulating fd filamentous bacteriophage into PLGA polymeric MPs that grants both bacteriophage stability and infectivity, as well as the immunogenicity of the antigen displayed on bacteriophage.