The management of industrial waste is a principal area of development in the world, as industrial waste contains a wide variety of organic and inorganic pollutants that have a negative impact on the environment. The distillery industry is one of the main sources of environmental pollution, but also one of the key factors contributing to the development of the global economy. Only 5% of the world’s ethanol production comes from chemical synthesis. More than 95% of ethanol is produced from agricultural raw materials. Of these, sugar-based raw materials account for approximately 42% of the ethanol produced, and non-sugar raw materials (mainly starch-based) account for approximately 58% [1]. Ethanol is produced from cereals (mainly rye, corn, triticale, and wheat), root crops (mainly potatoes), molasses, and other agricultural raw materials [2]. The production of alcohol is constantly growing because it is used in many industries, including the chemical, pharmaceutical, cosmetic, beverage, food, and perfume industries. In addition, the European Union program obliges Member States to use biofuels as transport fuels (their share should amount to 14% in 2025 and 19.7% in 2030) [3]. Along with the increase in the demand for alcohol, the amount of byproducts (termed distillery stillage), which may be up to 15 times greater than the amount of alcohol produced, is also increasing [4]. Treatment of distillery byproducts is a priority area for environmental protection because untreated byproducts that are released into the environment increase water pollution, adversely affect aquatic life, and reduce soil alkalinity. The literature indicates that the most promising option for utilization of distillery byproducts is to valorize them as a renewable feedstock for recovery of energy and biobased materials, thus enabling integration of remediation and recovery of resources. In this biorefinery approach, appropriate technologies are required, including methanogenesis, photosynthesis, photofermentation, dark fermentation, and bioelectrogenesis, which are made possible by the versatile metabolisms of biocatalytic micro-organisms.

The degradation of substrates with a high protein content results in a high level of ammonium (NH4+-N) in the residue, which causes process instability and reduced biogas/methane production [5]. At a NH4+-N concentration above 3 g/L, acetate degradation changes from acetotrophic methanogenesis to syntrophic acetate oxidation [6][7]. The syntrophic co-operation between syntrophic acetate-oxidizing (SAO) bacteria and hydrotrophic methanogens means that the oxidation of acetate is combined with hydrogen consumption. Cocultures of SAO bacteria and methanogens usually have a lower growth rate than acetic methanogens, which decreases biogas production.
Another ingredient influencing anaerobic digestion is sulfuric acid, which is used to regulate the pH during alcohol production. This contributes to the high concentration of sulfates in distillery stillage [8]. Sulfate-reducing bacteria convert sulfates into sulfides [9]. Degradation of amino acids releases sulfides from the amino acids, methionine and cysteine, which results in the release of organic sulfur in the form of sulfides. Sulfides cause corrosion, decrease the bioavailability of trace elements essential for microbial activity by forming complexes with metals, and inhibit the growth of micro-organisms and the consumption of organic compounds (mainly alcohols, volatile fatty acids (VFAs)) and hydrogen, which could be used for biogas production [10][11].
Anaerobic digestion of distillery stillage produces digested sludge, which is rich in nutrients [12] and can be used as manure. Before the treated effluent can be released into the environment, it requires further treatment. The major challenges in treating this anaerobically digested effluent are the removal of color and inorganic compounds.

2.2. Effect of Polyphenols and Melanoidin on Biomethane Production 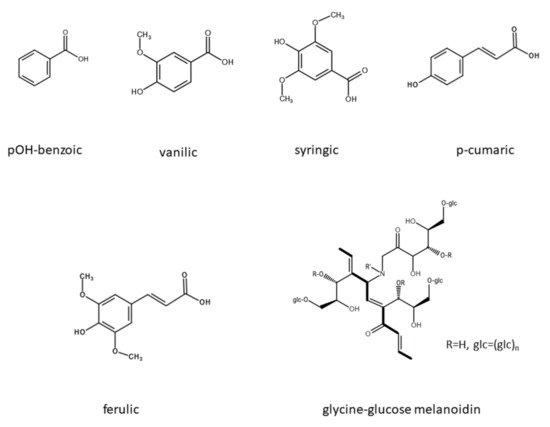 Figure 1. The structure of polyphenols and melanoidin (based on [36]) typical for the distillery stillage.
To improve biomethane production and to ensure the profitability of biogas plants, technologies for accelerating biomethane production from wastes that contain polyphenols should be developed. The antioxidative properties of polyphenols and melanoidins made them important for food, cosmetics, and pharmaceutical applications. Therefore, their recovery from distillery waste can bring two advantages: obtaining products of commercial interest and improving anaerobic digestion of this waste. For example, Kaushik et al. [37] used ultrafiltration, adsorption–desorption, and solvent extraction for recovering polyphenols and melanoidins from sugarcane molasses distillery wastewater. Methane content in produced biogas increased from 51% in the control sample to 70% after adsorption, which improved the methanation the most from the tested options. From molasses distillery effluents, melanoidins were removed with biological and physicochemical methods, as well as employing microbial fuel cells for electricity generation [38]. Biological methods included the use of a pure bacterial consortium comprising Proteus mirabilis, Bacillus sp., Raoultella planticola, and Enterobacter sakazakii [34], or phycoremediation [12]. Physicochemical methods included electrochemical degradation performed with ruthenium-oxide-coated titanium mesh (anode) and stainless steel (cathode) [39], or UV photodegradation [40].

To couple with anaerobic processing of distillery stillage, pretreatment techniques were used, including ozonation, ultrasound, thermal process, hydrodynamic cavitation, and fungal pretreatment. Methane yield coefficient and methane production rate were increased by about 13.6% and 41.16%, respectively, when using ozonation [41]. This pretreatment did not increase COD removal itself compared to anaerobic digestion alone; however, it converted polyphenols to other forms, thus increasing methanogenesis efficiency [41]. Hydrodynamic cavitation removed COD by 32.24%, TOC by 31.43%, and color by 48.00% [42]. Thermal pretreatment, ultrasound, and ozonation resulted in a 45.6% reduction in COD [43]. Fungal pretreatment with Trametes pubescens resulted in 53.3 and 72.5% removal of COD and polyphenols, respectively [44].

To valorize distillery wastes, anaerobic digestion is mostly used to recover energy in the form of biogas. However, the effluent from anaerobic digestion still contains organic compounds and is dark in color. As an example, anaerobically digested stillage may contain 25,000–40,000 mg COD/L, 7000–10,000 mg BOD/L, and 22,000–34,000 mg TSS/L [12]. It was found that anaerobic processing does not decrease polyphenol content [26]. In addition, some polyphenols may be transformed from one form to another during different phases of the fermentation process [45], and, also, the transformation of polyphenols to less colored but more toxic products can proceed during the treatment of distillery waste with fungus Pleurotus sp. under aerobic conditions [46]. Therefore, to meet the environmental discharge standards, further treatment is necessary. Most often, when the BOD/COD ratio of the anaerobic effluent is greater than 0.25, the effluent is treated aerobically.
In the development of biological methods, the ability of some microbial strains or consortia to biodegrade anaerobically digested distillery stillage was examined. Efficient biodegradation was obtained when using such bacterial genera as Pseudomonas, Bacillus, Microbacterium, Achromobacter, Staphylococcus, and Alcaligenes [47][48]. According to Mohana et al. [49], Pseudomonas, Stenotrophomonas, and Proteus were able to remove COD (51%) and color (67%) within 72 h. The decolorization was possible by excretion of manganese peroxidase and laccase that removed the melanoidin by over 70% [34]. Removal of color was also achieved when employing yeast strains for the post-treatment of molasses distillery wastewater [50]; the removal efficiencies of color, COD, and BOD by Citeromyces sp. were 75, almost 100, and 76%, respectively. From the same type of wastewater, extracellular enzymes secreted by white-rot fungi (manganese peroxidase, lignin peroxidase, and phenol oxidase (laccase)) allowed efficient removal of melanoidin and polyphenols [51].
Apart from pure cultures, mixed cultures of activated sludge were reported to efficiently remove tannic acid polyphenol-containing wastewater under aerobic conditions at dissolved oxygen concentrations above 1 mg/L [52]. To enhance microbial growth and improve polyphenol degradation, supplementation of carbon sources was carried out [53]. The studies of aerobic treatment of anaerobically digested distillery stillage focused on the optimization of the operating parameters, particularly OLR. In the sequencing batch reactor (SBR) operated at a constant HRT of 24 h, an increase in OLR from 1.8 to 9 kg COD/(m3·d) decreased the SBR performance [54]. The highest removal of COD (74%) and BOD (96%) was obtained at 3.6 kg COD/(m3·d). Apart from activated sludge reactors, biofilm in a rotating biological contactor was used after treating distillery stillage in microbial fuel cells [55]. The removal of COD and BOD was 84 and 81%, respectively.
The combination of activated sludge treatment with a biomass separation on a membrane in the technology of membrane bioreactors (MBR) results in a recovery of high-quality effluent when treating distillery stillage, a smaller footprint, and reduced sludge generation. In a lab-scale MBR, 95% COD reduction and 92% decolorization were achieved [56]. At an OLR between 3.0 and 5.7 kg COD/(m3·d), 41% COD removal [57] or 60% COD removal [58] was obtained, depending on the cut-off of the membrane used. In the study by Deschamps et al. [59], the membrane was directly incorporated into the anaerobic treatment, which produced a pilot-scale AnMBR. High biogas production of 1.36 NLbiogas/(Lbioreactor·d) was obtained at an OLR of 3.97 kg COD/(m3·d) and HRT of 3.5 d. By comparison, with the anaerobic packed-bed bioreactor, it was found that the higher COD removal efficiency (96.9%) and higher methane production (0.26 L CH4/g COD) were obtained in the AnMBR with a shorter start-up period (21 d).
The limitations of aerobic processes for post-treatment of distillery stillage include the energy costs for aeration, high amount of excess sludge produced, necessity of nutrient supplementation, and operation at high dilution rates [26]. To make the post-treatment more energetically efficient, phycoremediation using microalgae was applied [12]. Particularly, effluents from the acidogenic process can be used by these photosynthetic organisms, also termed photobiocapture organisms. In this process, microalgae use nutrients present in the effluent and sunlight for growth. Moreover, carbon dioxide is absorbed by microalgae and converted into oxygen, thus reducing the energy requirements. Biomass produced may be further utilized for the production of biogas, biodiesel, or fertilizer. However, the feasibility of this technology depends on sufficient sunlight accessibility in a particular location. As an example, 83.2% of COD and 88.0% of BOD were removed in microalgae ponds with an HRT of 11 d [60].
For post-treatment, physicochemical methods are also used; however, they are more effective for low-loaded effluents than biological processes. To recycle the water, reverse osmosis allowed for recovering 60% of water, with a permeate COD of 100 mg/L [12]. However, a high-pressure drop on the membrane under the conditions of high pollutant load and the necessity to utilize retentate increase the total operational cost.
The other solution that allows for water recovery from distillery thin stillage is evaporation that increases the solid content to 55–60% [61]. Burning stillage generates steam, which can be used as evaporation fuel, to generate electricity or run a turbine. The condensate from the evaporation system can be recycled back to the fermentation process. However, the process is highly energy-intensive; 550 kcal of energy is required to evaporate 1 L of water [12].
The other post-treatment process used is ultraviolet (UV) photodegradation. In the study by Apollo et al. [40], it was found that UV photodegradation is effective in color removal, but not effective in COD and BOD removal from distillery effluent. On the other hand, anaerobic digestion alone removed COD effectively, but the color was not sufficiently removed, or even increased because of the conversion of color imparting compounds, such as melanoidin. Therefore, using UV photodegradation as a post-treatment to the anaerobic digestion allowed COD removal of above 85% and 88% of color removal to be obtained.