Flecainide is an IC antiarrhythmic drug approved in 1984 from Food and Drug Administration for the suppression of sustained ventricular tachycardia and later for acute cardioversion of atrial fibrillation (AF) and for sinus rhythm maintenance. It is categorized as a Vaughn-Williams Class IC agent based upon its properties of causes a strong degree of sodium channel blockage with slowing cardiac conduction and a minimal effect on ventricular repolarization. Currently, flecainide is mostly used for sinus rhythm maintenance in atrial fibrillation patients without structural cardiomyopathy although recent studies enrolling different patient population demonstrated a good effectiveness and safety profile.

Flecainide is a class IC antiarrhythmic drug (AAD). Flecainide was first synthesized in 1972 and approved in 1984 from the Food and Drug Administration (FDA) for the suppression of sustained ventricular tachycardia [1] and later for acute cardioversion of AF and for sinus rhythm maintenance. Currently, the use of flecainide in atrial fibrillation represents the main indication of the drug. Nevertheless, despite its effectiveness and safety profile it is still underused [2]

Flecainide, administered bis in die (immediate-release form) or once daily (controlled-release form), is nearly completely absorbed from the gastrointestinal tract with very high bioavailability (from 85% to 90%) [3].  Serum concentration (SC) ranging from 0.2 to 1 mcg/ml provide the greatest therapeutic benefit but higher concentrations are associated with proarrhythmic side effects [4]. The apparent volume of distribution is wide, with only about 40% of drug bound to plasma proteins [5]. Flecainide is metabolized in the liver via cytochrome (CYP2D6 and CYP1A2) in meta-O-dealkylated flecainide (active, but about one-fifth as potent) and meta-O-dealkylated lactam (inactive form), then excreted in the urine. Since flecanide is mainly metabolized via cytochrome CYP2D6 [6], CYP2D6 inhibitors increase its plasmatic concentration and inductors decrease it. [7]. About 30% of an orally administered dose escapes liver metabolism and is excreted in the urine unchanged [3]. Elimination half-life is about 20 hours (range: 12-27 hours) [8], unaffected by dose, but it may be prolonged until 70 hours in patients with heart failure, renal disease (creatinine clearance < 50 ml/min) and liver disease [8] (Table 1).

2. Vademecum for the Management of Flecainide

A 12-lead ECG is mandatory before starting the therapy with flecainide and after 1-2 weeks after its administration; symptomatic bradycardia, second degree or superior atrioventricular (AV) block, QRS duration longer than 120 ms or Brugada syndrome contraindicate the prescription of flecainide. [24] [7]

It is reasonable to perform an echocardiogram to evaluate LV function and exercise stress testing in high-risk patients to exclude the possibility of coronary artery disease. It is strongly suggested to test the first dose under medical observation. The minimum effective plasma concentration of flecainide is about 200 ng/mL while optimal range is between 200 ng/mL and 400 ng/mL [25]. This plasma concentration leads to a QRS prolongation of about 10 ms; a prolongation of 40 ms or more is associated to an increased probability of cardiovascular adverse effects [25]. A practical approach to flecainide dose ranging, in absence of kidney failure, is as follows [24] (see also—Figure 1): 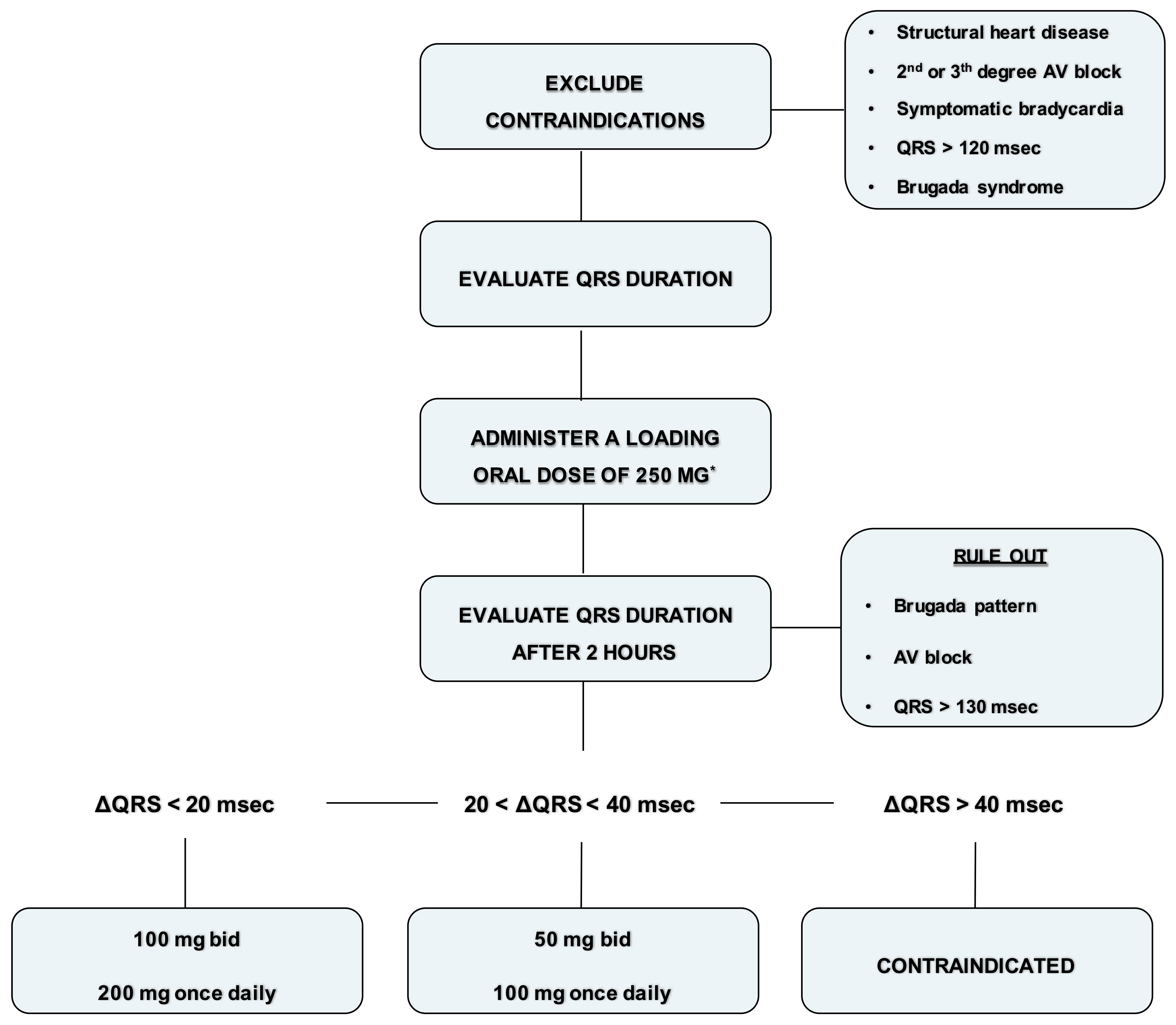 Figure 1. Flowchart for administration of flecainide. * Loading oral dose of 200 mg is recommended if the weight is lower than 70 kg.

There is a relationship between dose and concentration for both safety and efficacy. The incidence of adverse cardiovascular events rises with increasing flecainide plasma levels. However, the therapeutic effects, associated with greater than 90% suppression of premature ventricular beats (VPBs), are achieved at the range between 250–500 ng/mL of flecainide plasma levels. [25][26]. Clinicians should consider this aspect and adjust dosing according to the clinical response. [25]

Periodic monitoring of flecainide plasma levels, blood pressure and ECG is required in patients with severe hepatic disease or severe renal failure. [25] [27].  Flecainide is predominantly excreted in the urine and the plasma elimination half-life is significantly prolonged in patients with renal impairment. [25][26][27]

Flecainide plasma levels and ECG monitoring are also indicated in elderly patients, who present decrease in renal function and an increased drug-drug interaction risk for the presence of comorbidities. [25] Furthermore, it has been demonstrated that there is an age-related decline of flecainide clearance in this population due to a CYP2D6 genotype. [6]

Flecainide is very effective in restoring sinus rhythm in acute setting [28] with high percentages of success, greater than both propafenone and amiodarone [29] as well as with shorter cardioversion times (50% of patients are actually cardioverted in 1h if intravenous administration and in 3 h if orally given) [30][31][32][33][34][35]

Flecainide is effective even when administered orally at a charge dose (“pill in the pocket strategy”). The "pill in the pocket" strategy is currently indicated as a therapeutic strategy in selected patients (class IIa, level of evidence B), with recent onset of atrial fibrillation without significant structural or ischemic heart disease, but only following efficacy and safety assessment [7]

Flecainide is currently recommended as a first-line long-term rhythm control in atrial fibrillation in class of recommendation I and level of evidence A, in patients with normal left ventricular function and without structural heart disease [7]

The maintenance of the sinus rhythm is more advantageous than rate-control both in terms of survival [36] and quality of life [37][38]. Several studies showed that flecainide is safe and effective in reducing the recurrences of paroxysmal AF and the time between episodes when compared to other antiarrhythmic drugs (table 2)

Recently, a retrospective study involving 144 patients with atrial fibrillation demonstrated that flecainide is effective and well tolerated, even at 12 months. After 6 and 12 months of treatment, 70.8% and 61.8% of patients respectively were symptomatically controlled [45].

Flecainide reduces the recurrences of supraventricular arrhythmias, and this could be related to the inhibition of the potassium and calcium currents with consecutive reduction of cellular excitability. Usually, betablockers are used as a first line therapy in atrioventricular nodal re-entry tachycardia, but flecainide represents an alternative if beta-blockers are not effective or contraindicated. [27]

Flecainide plays a key role in management of Premature Ventricular Complexes (PVC) and of Ventricular Tachycardia (VT) in structurally normal hearts with a class I indication and should be utilized as first line therapy in these patients beside radiofrequency ablation. Choice between drug therapy and ablation is based on patient choice and procedure complexity and risks.

Flecainide may be useful as add-on therapy in management of some rare channelopathies such as Catecholaminergic Polymorphic Ventricular Tachycardia (CPVT) and some subtypes of long QT syndrome, LQTS type 3 and Andersen – Tawil Syndrome (LQTS type 7). [49]

Flecainide is very effective in CPVT which usually has a high frequency. In this arrhythmia, however, the efficacy seems to be related to a different mechanism of action. CPVT is induced by calcium overload due to sympathetic activation and to a diastolic calcium release from the sarcoplasmic reticulum through defective leaking RYR2 channels. Flecainide blocks the RYR2 channels allowing direct targeting of the molecular defect [50].

Flecainide is effective in patients with Long QT Syndrome (LQT) type 3 as it inhibits not only the peak but also the late component of the sodium current, inducing an abbreviation of the QT interval. This form, indeed, is provoked by mutations that increase the late sodium current [51]

3.4. Flecainide in Association with Other Antiarrhythmic Drugs

In some AF patients may be difficult to maintain sinus rhythm and symptomatic AF episodes remains a difficult therapeutic problem. Therefore, a combined anti-arrhythmic strategy may be necessary in some cases. Flecainide combination with amiodarone is interesting, not only because it may be effective when the efficacy of each is inadequate as a single-drug therapy, but also because it is relatively safe and may allow a reduction in their respective dosages and side effects [52] [53][54]

The association of flecainide with other AV blockers as digoxin is frequent; close monitoring of serum digoxin concentrations is recommended because it could increase 6 hours after co-administration with flecainide by 15–19% [56][57]

In the same way, it is necessary to consider with caution the combination of flecainide with verapamil, because of potential additive effects on myocardial contractility and on atrioventricular conduction [57]

According to 2020 ESC Guidelines for the diagnosis and management of atrial fibrillation, flecainide is contraindicated in patients with ischemic heart disease and/or significant structural heart disease. Flecainide may induce hypotension and mild QRS complex widening. Furthermore, may increase atrial flutter cycle length, thus promoting 1:1 atrioventricular conduction and increasing ventricular rate; this risk can be reduced by concomitant administration of an atrioventricular nodal blocking drug such as a beta-blocker or non-dihydropyridinecalcium-channel blocker[7]

A practical guide on the management of adverse events due to flecainide is provided in Table 3.

Table 3. Management of adverse events due to flecainide.

The controlled-release (CR) formulation of flecainide acetate allows once-a-day administration therapy. The pharmacokinetic profile is characterized by a reduced and delayed reaching maximum concentration (Cmax) and lower fluctuations of plasma concentrations during a dosing interval compared with immediate-release form. Serum concentration peak of slow-release form is reached in 26 h, the steady state plasma level is reached after 4-5 days ranging from 270 to 330 ng/ml far from plasma level at risk of side effects [58]. After repeated-dose administration, maximum and minimum QRS prolongation does not differ between the two forms but with the CR-formulation there is a less variability compared with the immediate-release form [58]. Moreover, CR formulation improves treatment compliance and, reducing variability and peaks, decreases the risk of side effects and interactions with other drugs, preserving clinical benefit. Controlled-release flecainide is also effective in long-term prevention of atrial fibrillation recurrences. In 227 outpatients with paroxysmal atrial fibrillation and treated for 24 weeks with controlled-release flecainide at the dose of 200 mg, there was a decrease of incidence of paroxysmal atrial fibrillation episodes from 28.6% at baseline to 11% at the end of the study (p<0.0001) recording by Holter [59].

Recently, in a prospective multicenter observational study that enrolled 679 patients with paroxysmal and persistent atrial fibrillation, was reported that a treatment with flecainide at controlled-release form improve quality of life and have a good safety profile. Indeed, the treatment with CR flecainide reduced the CCS-SAF score from 1.64 at baseline to 1.32 at the end of the study (p < 0.0001) and only the 0,6% of patients experienced non serious adverse events (dizziness, presyncope, flushing and a new-onset left bundle branch block). Furthermore, the compliance to treatment with flecainide at controlled-release form was elevated during 12-weeks period (100% in 93,6% of patients). This high compliance may reflect the once daily dosing regimen and this trend has a considerable impact on cardiovascular disease medications [60].

Flecainide, administered bis in die (immediate-release form) or once daily (controlled-release form), is effective for the acute termination and for the chronic suppression of atrial fibrillation and ventricular arrhythmia. An excellent safety profile is described in patients with minimal or no signs of structural heart disease while mounting promising evidence will be available in patient with cardiomyopathy.  A 12-lead ECG is required before starting therapy while ECG monitoring is suggested in case of drug adjustments or concomitant therapy with other antiarrhythmic drugs, particularly in the elderly and in patients with hepatic and/or renal dysfunction.

Despite the evidence supporting the efficacy and tolerability profile of flecainide, it is still underused due to the wrong idea about the risk for ventricular proarrhythmia. This aspect is even more clear with the controlled release form.

The immediate-release form (IR) and controlled-release form (CR) of flecainide have the same pharmacokinetic properties (absorption, distribution and excretion), but the pharmacokinetic profile of CR flecainide is characterized by a reduced and delayed reaching maximum concentration (Cmax) and lower fluctuations of plasma concentrations during a dosing interval compared with immediate-release form. Controlled release formulation improves treatment compliance and, reducing variability and peaks, decreases the risk of side effects and interactions with other drugs preserving clinical benefit.