In Reference [73] a composite of Fe nanowires inside SWCNTs was prepared and its ferromagnetism at room temperature was detected. Reference [75] reported that the magnetization of Fe-filled SWCNTs exceeds that of pristine SWCNTs. A study employing X-ray magnetic circular dichroism and the superconducting quantum interference device of Fe encapsulated inside metallicity-sorted SWCNTs revealed the differences in the orbital and spin magnetic moments of the iron for SWCNTs with different conductivity type [74]. In Reference [71], it was found that small Ni clusters featured superparamagnetism at room temperature. Authors of Reference [78] measured the transport properties of Co cluster-filled SWCNTs. The cobalt nanoparticles encapsulated in SWCNTs were found to be ferromagnetic.

Figure 1 shows single traces of conductance (G (e2/h)) (e – the charge of electron, h – the Plank’s constant) measured as a function of gate voltage (Vg) and sweeping in-plane magnetic field (μ0H) (μ0 – the vacuum permeability, H – the magnetic field) [78]. The cobalt-filled SWCNT device was measured at T = 40 mK. The field was swept at a constant rate in either direction between -2.5 to +2.5 T. The conductance evolves in a continuous manner as the field is swept (Hsw) unless the sweeps go through mirrored critical field values (Figure 1a-c) at μ0H = ±μ0Hsw = ±1.28 T in each sweep direction. The forward and backward conductance trace show at their respective critical fields a symmetrical sudden jump (ΔGsw). The peculiar conductance traces correspond to a pronounced hysteresis, centred around H = 0. The sign and amplitude of the symmetric conductance jumps are shown in Figure 1d and depend strongly on Vg but they are always observed at the same critical fields (μ0Hsw = ±1.28 T) [78]. 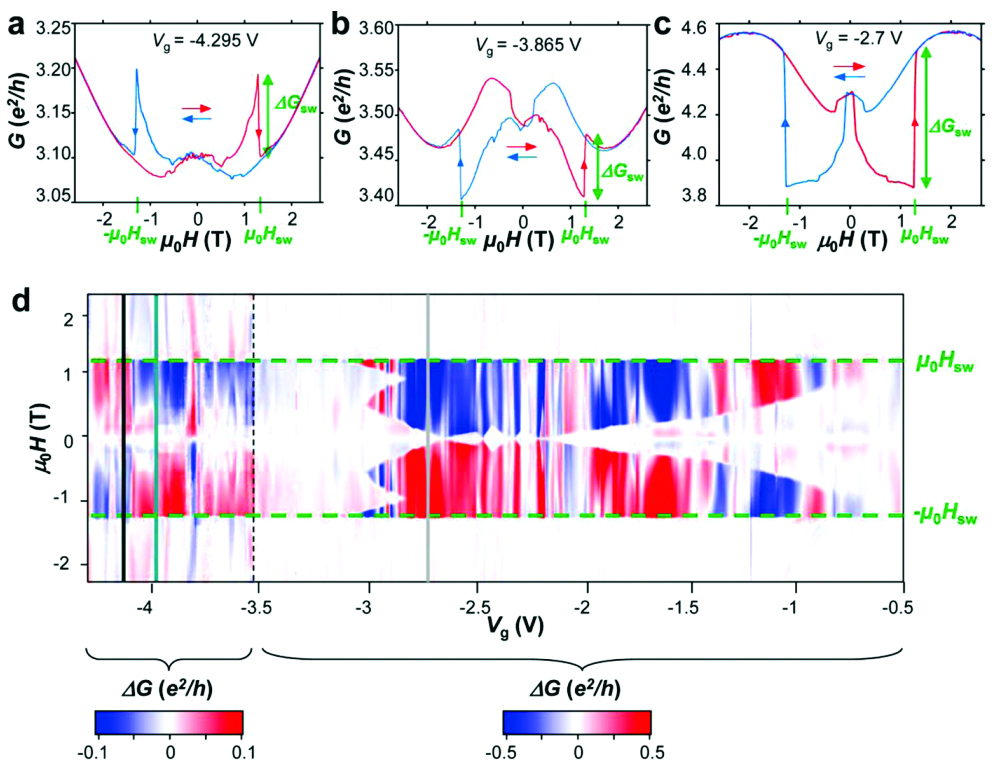 Figure 1. Conductance hysteresis loops of cobalt-filled carbon nanotubes at 40 mK. (a-c) Differential conductance dI/dV as a function of in-plane magnetic field μ0H for selected gate voltages. The field was at an angle of 25° with respect to the nanotube axis. The red and blue arrows in (a-c) indicate the field sweep direction. (d) The changes in amplitude and sign of the jumps for different Vg. Note the two different conductance color scales above and below Vg = -3.5 V. Reprinted with permission from [78]. Copyright 2011 American Chemical Society.