Glucocorticoids (GCs), a class of corticosteroids produced by the adrenal cortex in response to stress, exert obesity-promoting effects.

Brown and beige adipocytes, referred to as lipid-burning cells, dissipate energy in the form of heat, and are widely recognized as a potential therapeutic approach for the treatment of obesity and its associated disorders. The sympathetic nervous system (SNS) richly supports brown adipose tissue (BAT) and is also arborized in white adipose tissue (WAT) at a certain level [1][2]. Upon cold exposure, SNS releases norepinephrine in adipose tissue, thereby, activating β3 adrenoceptor signaling and thermogenic program in adipocytes [1][2].
The neuroendocrine hormones, including the thyroid hormones triiodothyronine (T3) and thyroxine (T4), glucocorticoids (GCs), and the adrenal medullary hormones catecholamine and dopamine, play a pivotal role in metabolic homeostasis maintenance [3][4][5] However, the mechanisms underlying neuroendocrine regulation of thermogenic program and cold adaptation remain largely unknown.
GCs are a class of corticosteroids that are critical for the regulation of metabolic, cardiovascular, immunologic, and homeostatic functions in response to various types of stress in humans and in rodents [6][7]. Although it has been well considered that GCs mobilize glucose, amino acids, and fatty acids, whether GCs are involved in cold-induced thermogenesis remains to be established. Cortisol in humans and corticosterone in rodents are the principal circulating GCs and are secreted under the control of the hypothalamic–pituitary–adrenal (HPA) axis [8]. In mice, fecal corticosterone excretion and plasma adrenocorticotropic hormone (ACTH) increased after 24-hour cold exposure [9].
The correlation between cold stress and the cortisol circulating level has also been assessed in humans, and the effects of cold exposure on serum cortisol levels are contradictory [10][11][12][13][14][15][16]. Some studies showed that serum levels of cortisol and/or ACTH were elevated by cold stress [10][11][12][13][14][15]. However, other studies reported a decrease or no effect on the cortisol levels in response to cold exposure [14][16][17]. Therefore, more studies are in need to address the controversy about the correlation between GCs and cold stress.
Stress hormone GCs demonstrate obesogenic and pro-diabetic properties. The increased level of glucocorticoid explains the metabolic abnormalities, such as obesity, hypertension, hyperlipidemia, and glucose intolerance in Cushing’s syndrome with pituitary adenoma [6][18][19]. Chronic GC excess has been also considered to induce obesity at least in part through suppressing BAT activation and browning of WAT in rodents and in humans [20][21][22][23][24][25]. The complexity of GC physiology has been appreciated in the past several years.
Luijten et al. demonstrated that GC administration for 2 weeks lowered UCP1 expression only at thermoneutrality conditions, and the obesity-promoting effects of GC do not require UCP1 under both room temperature and thermoneutrality [26]. Moreover, GC acutely increased BAT activity in humans, implying the primary involvement of GC in cold-induced thermogenesis [27]. In the same study, GC action in human brown adipocytes is distinct from that in rodent cells where cortisol substantially suppressed isoprenaline-stimulated respiration and UCP-1 [27]. While cold-induced fecal corticosterone excretion was reported [9], whether circulating GC senses short-term cold stress and modulates thermogenesis at such condition is largely unknown.
GCs bind to the glucocorticoid receptor (GR) to form a complex and substantially facilitate the translocation of its own receptor into the cell nucleus and transcriptional control of target genes involved in inflammation, gluconeogenesis, and adipocyte differentiation [28][29]. Upon activation, dimerized GR binds to GC response elements (GREs) and activates gene transcription (Bamberger et al., 1996, Schacke and Rehwinkel, 2004). On the other hand, the Glucocorticoid–GR system has been shown to mediate the promoting effects of chronic stress on adipose tissue inflammation and abnormal glucose and lipid metabolism in obese rats [30].
Constitutive deletion of GR in adipocytes attenuated diet- and aging-induced adiposity accompanied with impaired WAT lipolysis and reduced thermogenesis, whereas had a little effect on BAT UCP1 in short-term cold exposed mice [31]. One recent study showed that conditional adipocyte-specific GR invalidation improved glucose and lipid profiles with an expansion of fat mass [32]. Interestingly, Glantschnig et al. using UCP1-dependent, BAT-specific GR knockout mice demonstrated a negligible role of GR in brown adipocytes in BAT function and systemic metabolism [33]. These studies implied that glucocorticoid-GR signaling plays an unrevealed role in WAT metabolism. However, whether glucocorticoid-GR signaling is required for acute GCs modulation of WAT browning and energy expenditure remains to be established.

2. Circulating Levels of Corticosterone Are Elevated by Acute Cold Stress

Circulating levels of adiponectin were suppressed by cold exposure [34][35], and this provides a mechanism underlying cold-induced adipose-resident group 2 innate lymphoid cells (ILC2) activation and thermogenesis [36]. We asked whether stress-responded neuroendocrine hormones are altered by cold stress.
Similar to norepinephrine levels in WAT [37], circulating levels of corticosterone were increased by cold exposure for 48 h in male mice (Figure 1A), while the levels of T3 and adiponectin in serum were decreased by acute cold stress (Figure 1B,C). To investigate whether the downregulation of circulating adiponectin was resulted from the altered neuroendocrine hormones, we treated differentiated 3T3-L1 adipocytes with β3 adrenoceptor agonist CL316,243, T3 and hydrocortisone with different doses for 24 h. We found that the treatment of hydrocortisone but not CL or T3 downregulated both expression levels and secretion levels of adiponectin in adipocytes (Figure 1D), suggesting that acute cold stress downregulates adiponectin expression through GC. 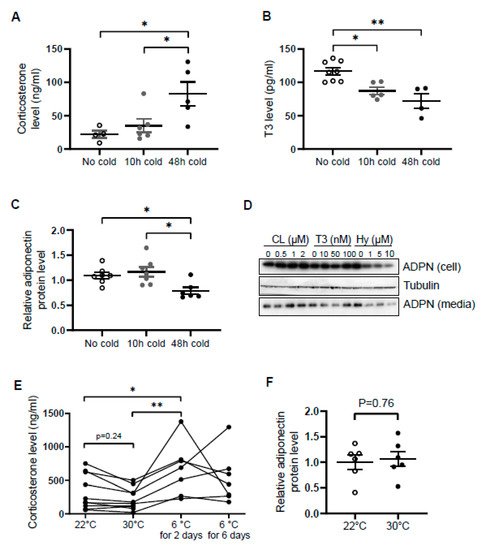 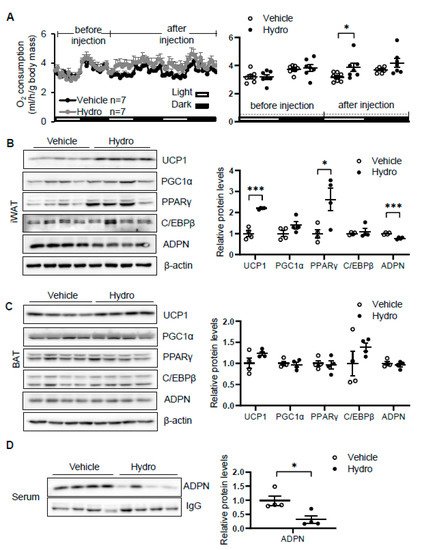 To dissect the role of glucocorticoid in regulating thermogenesis, we administered mifepristone 5 mg/kg intraperitoneally in 2-month-old male wild type. As a result, administration of mifepristone suppressed cold (6 °C for 48 h)-induced energy expenditure with no effect at room temperature with no significant effects on food intake, animal activities, and respiratory quotient (Figure 3A). Consistent with this, mifepristone treatment downregulated the expression levels of thermogenic genes Ucp1 and Pgc1α in iWAT (Figure 3B) but not in BAT (Figure 2C) under cold condition, supporting the promoting effect of glucocorticoid on thermogenesis. On the other hand, mifepristone treatment induced adiponectin expression in iWAT and in circulation (Figure 3B,D). Furthermore, the suppressing effects of mifepristone on thermogenic gene expression and energy expenditure were abolished in adiponectin deficient mice (Figure 3A,B), suggesting that adiponectin downregulation mediates glucocorticoid-promoted thermogenesis. 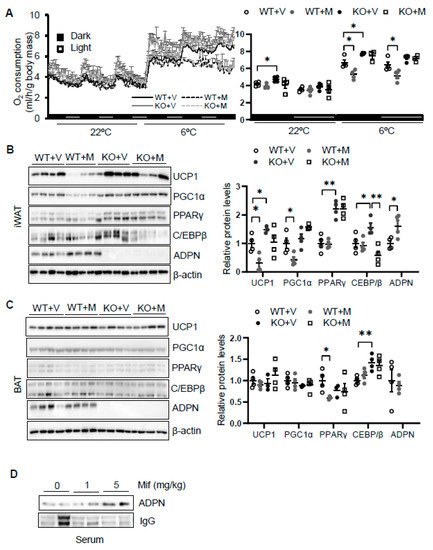 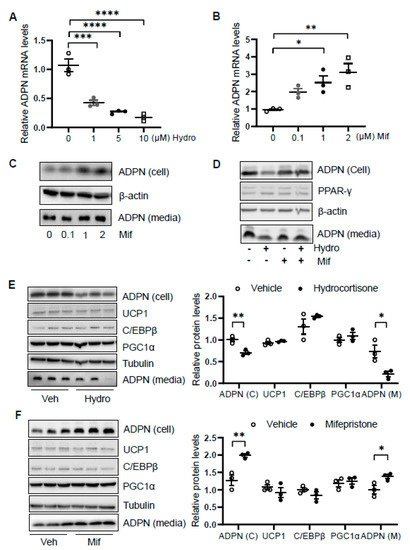 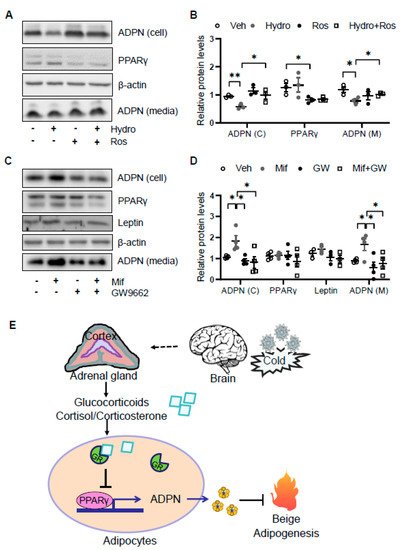