Standard driving cycles (DCs) and real driving emissions (RDE) legislation developed by the European Commission contains significant gaps with regard to quantifying local area vehicle emission levels and fuel consumption (FC). The aim of this paper was to review local DCs for estimating emission levels and FC under laboratory and real-world conditions. This review article has three sections.

The DC has been defined by various authors as “a series of data points representing speed versus time, and gear selection as a function of time, speed versus distance in a specific region, or a part of a road segment” [3] and “a speed-time profile for a study area within which a vehicle can be idling, accelerating, decelerating, or cruising” [4]. The most important functions of vehicle driving cycles are to determine emission levels and FC [4][5], evaluate vehicle performance [6], estimate driving style [7], and simulate driving circumstances on a laboratory chassis dynamometer (CD) [8], which provides the basis for vehicle design [9]. For electric vehicles, the driving range calculation and state of charge estimation are generally performed on the basis of the standard driving cycle [9].

The Japanese driving cycle JC08 shown in Figure 1 has been used for emission certification of PCs and light-duty trucks since 2011 [10]. JC08 is highly transient with a minimum cruising time and long idling period, with a cold start weighted at 25% and a hot start at 75% [11]. 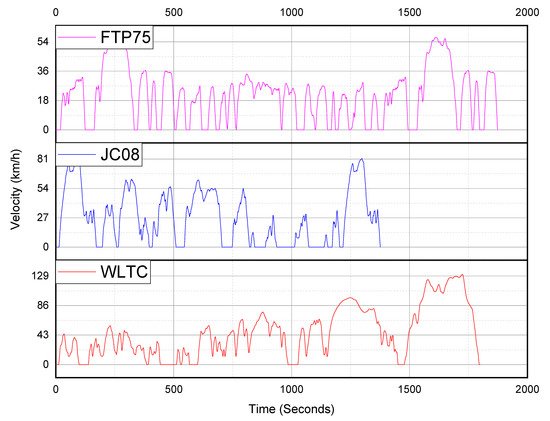 The CD and emission model software is used most to determine vehicle emission factors. However, in recent years, researchers have found a significant gap in emissions reported using the above two methods. Measuring vehicular emissions on a CD involves driving a vehicle through a predetermined DC [6][13] by a human driver, with a device known as a driver’s aid informing the driver how to drive the vehicle, including speed tolerances around the target speed trace [14]. During this test, the exhaust flow rate is continuously monitored, and the exhaust gas is collected in sample bags for subsequent analysis of content and concentration after dilution with ambient air. A constant volume sampler (CVS) system based on a CD is displayed in Figure 2 [2]. 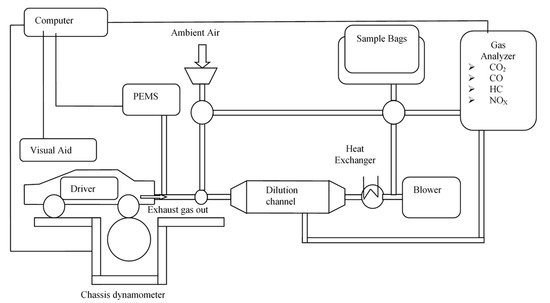 Figure 2. Experimental set-up of a CD for measuring emissions and FC [2].

For the accurate development of DCs, a large sample of representative driving data is required [15]. Among the current technologies, GPS and an on-board diagnostics (OBD) interface are the most common instruments for the collection of driving data.

GPS: provides data on a vehicle’s velocity, time, date, latitude, longitude, and altitude. Galgamuwa et al. (2016) used the on-board measurement method with five GPS devices for data collection in the study area, collecting data on 78 trips at one-second intervals [16]. GPS-based data collection has the advantages of being small and easy to carry on vehicles, device installation and operation not affecting the operation of a vehicle, good signal reception, bulk data storage, and being a high-frequency data acquisition system [17]. A similar approach was taken by [18][19][20][21][22] for data collection using GPS.

Huertas et al. (2018) disregarded trip data that were missing typical values with less than 90% of available data. Rather than fixing missing values, they ignored the data [24].

3. Comparison of RDE Tests with Laboratory-Based and Real-World Emissions

Conducting emission tests on a chassis dynamometer (CD) is standard practice for comparing the vehicle’s emissions and verifying whether they remain under the emission limit, as per standards. However, CD tests suffer from shortcomings associated with their non-representativeness of actual on-road driving conditions. Comparison of RDE with laboratory-based cycles (WLTC, FTP75, and CADC) is presented in Table 1.

In urban areas, a cold start can significantly contribute to vehicles’ overall emissions and FC due to short trips and frequent starts [39]. Reduction in atmospheric temperature from 25 °C to 8 °C during a cold start (in the considered period of 300 s) resulted in a 16% rise in CO 2 (FC), a 195% rise in CO, a 280% rise in PN, and an 11% decrease in NO X [40]. The EU RD exclusions of a cold start and idling decrease the emission of CO 2 in the urban drive mode by 8% and leading to a decrease in CO emission by 18% [36]. For diesel vehicles in a RDE test, trips between 5 and 10 °C have up to 30% differences in NO X emissions, but for gasoline vehicles, the difference is not as significant [41]. CO 2 emissions are highest during a cold start, by a factor of 1.6 and 1.3, at temperatures of −7 and +23 °C, respectively, when compared with the warm start at +23 °C for a gasoline direct-injection vehicle equipped with a particulate filter, where the PN emission at −7 °C was 2.6 times higher than the 23 °C at ambient temperature [42].

3. Effect of route selection on RDE

In many metropolitan cities, traffic conditions are becoming more congested, and most passenger vehicles in developing countries are operated more in congested traffic conditions and signalized intersections. In the EU’s RDE legislation, the share of urban roads, rural roads, and motorways is nearly the same, but they contribute to different emission levels and FC.

Williams et al. (2018) conducted RDE performance tests on three different test routes. Route 1 had the largest share of urban driving section and, therefore, a lack of a motorway section; route 2 was equivalent to driving mainly on rural roads. Route 3 was consistent with the EU’s RDE legislation. They found that the emission of CO increased in proportion to the duration of the test, regardless of the type of test route used. They obtained higher CO and HC in those tests than within the EU RDE test. Such a situation occurs when these tests are shorter and the urban and rural part makes up a larger share in the whole test conducted. The authors confirmed that it is possible to shorten the test distance by about 20% without a significant change in the results of specific distance exhaust emissions [43].

The DC is an important idea in quantifying vehicle emissions and FC, and it is expected to effectively represent real vehicle driving patterns so as to obtain reliable estimates of vehicle emissions. The concern is growing about the gap between actual driving conditions and the standard DCs used for vehicle certifications and regulatory authorities. A review of recent and relevant studies on DCs quantifying vehicle emissions and FC has been undertaken. Local DCs were analysed for their route selection, data collection approach, cycle formation methods, and cycle assessment parameters and were compared with standard DCs. Lastly, the gaps between RDE and laboratory and real-world data were discussed. After performing a comparative analysis of local DCs and standard DCs, the findings of this study are that: A driving cycle that shows the highest coincidence with actual driving data from on-road vehicles is preferable for estimating emission levels and fuel consumption. Therefore, typical or local driving cycles should be developed that reflect local driving patterns or conditions that could be used for type approval tests of new and existing vehicles. Most of the reviewed local DCs do not distinguish between separate phases of urban rods, rural roads, and motorways. Almost all the local DCs reviewed do not identify shifting the strategy followed during the test on CD. Compared with WLTC, the local DCs are capable of producing higher emissions and FC due to a higher acceleration time and greater representativeness of the local DC at a particular place. The main problem associated with most developed local DCs is related to the small sample size collected from a few vehicles within a short period of time. Researchers mostly used micro-trip and Markov chain methods to construct a driving cycle for emission levels and fuel consumption, and recently, a new method called the fuel-based approach has also been introduced.

Future studies on driving cycles should note the importance of route planning, bulk data collection, data filtration, and selection of the most significant characteristic parameters. Furthermore, attention should be given to data collection time including peak times, off-peak times, and weekends.

From the comparison of RDE with laboratory-based emissions measurement and real-world emissions, the conclusions of this study are: RDE measured by PEMS are higher than laboratory-based measurements or CVS. RDE is not reproducible as laboratory-based measurements and results are different within and outside the boundary conditions. Under controlled laboratory conditions, PEMS resulted in higher emissions than CVS with low uncertainty; the major causes of PEMS’ uncertainty are drift of the analyser over time and exhaust flow rate. The gap between RDE and real-world emissions is caused by cold temperatures, road grade, a similar share of types of route, drivers’ dynamic driving conditions, the uncertainty of PEMS, and RDE analysis tools. Driving uphill greatly increases CO 2, FC, and NO X emissions due to higher energy demand on roads with an inclination. Operations in cold temperatures increase CO, PN, and CO 2 emissions compared with warm operation due to a richer air-fuel mixture in cold conditions and the catalytic convertor not reaching an effective operating temperature; however, NO X emissions showed a decreasing trend during cold operation. A more dynamic character than the RDE boundaries resulted in an increase in CO2, NOX, and PN emissions, long-distance driving on a motorway decreased NO X and PN emissions, and shorter trips on urban routes resulted in higher CO and HC emissions than EU RDE.