The coastal buffer zone is the transition area between land and sea spaces, encompassing lagoons and intertidal zones.

1. Definition of the Coastal Buffer Zone

Figure 1. Definition of coastal buffer zone based on marine physics [9].

1.1. Definition from the perspectives of coastal dynamic systems and processes

In terms of its land part, the coastal buffer zone should be defined as the area that can be reached by seawater. The broad definition should include coastal flooding areas by typhoons and storm surges. In the water part of the coastal buffer zone, areas with obvious sediment drift and transport should be included. The narrow limit can be set within the range of significant nearshore currents (water depth of 5–10 m), and the broad limit can be extended to the range where tidal currents affect sediment drifting (water depth of 20–30 m or deeper);

1.2. Definition from the perspective of disaster prevention

The coastal buffer zone can be defined as the region where the coastal disasters (such as typhoon wave height, storm surge, or nearshore currents) are reduced or eliminated. The range of this buffer zone can only include sea or land areas.
In the face of sea level rise and other severe coastal disasters as a result of climate change, we believe that it is appropriate to define the coastal buffer and protection zone from the perspective of disaster prevention and protection. Therefore, we adopted the following definitions to establish the coastal protection and buffer zones (Figure 3): 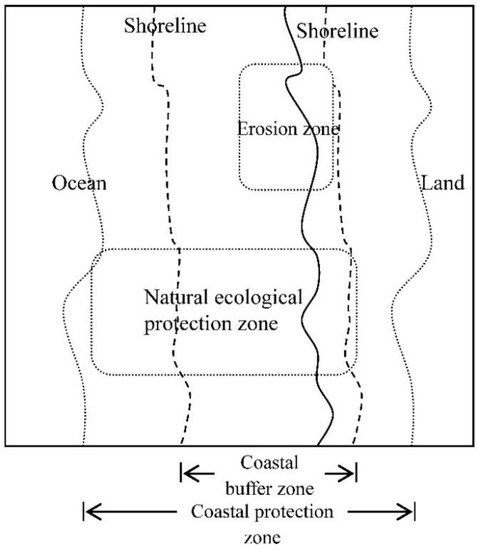 Figure 3. Sketch of coastal buffer and protection zones.
In Taiwan, the designation of coastal protection and buffer zones is based on typhoon waves and their resultant storm surges during a return period of 50 years as the input conditions. The suitability of the designated area is reviewed every ten years.

2. Recommendations for the Management and Administration of Coastal Buffer Zones

The planning and management of coastal buffer zones can be divided into two spatial directions, namely, land and nearshore sea areas, and then further combined into the entire strip. In addition to coastline and surface protection, research in the entire region must focus on coastal ecology, disaster prevention, and landscape recreation (Figure 4) [13]. Therefore, the concerned issues of coastal buffer zones must involve three aspects: technology, planning and management, and policy-making.

Figure 5. Impact factors of the coastal buffer zone [14].
Research on coastal buffer zones must consider the existing impact factors in coastal areas to understand their degree of effect on the prevention of natural disasters, coastal conservation, and ecology. We propose the division of the coastal area into coastal erosion, flooding, and storm surge subareas. The basis for this division must consider integrated studies on hydrodynamics, environment, and ecology. Furthermore, the research methods should include long-term field surveys, model experimental analyses, and numerical model simulations. In research applying numerical models, the following methods can be used to identify the impact factors of the coastal buffer zones (Figure 6): 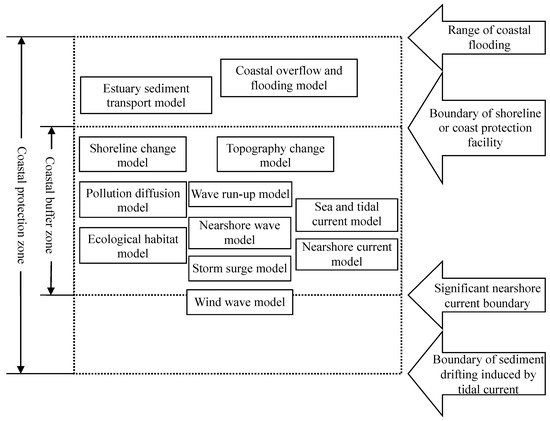 Figure 6. Schematic diagram of research on the application of numerical models to identify the impact factors of coastal buffer zones.
Based on the hydrodynamics of and sediment transport by nearshore and tidal currents, Lan et al. [40][41] and Li [42] proposed a method for determining the boundaries of offshore and onshore areas in the coastal buffer zone (Figure 7). They used the SBEACH model combined with the wave run-up model (Flow3D®) to perform dynamic simulations of beach profile changes on different sections of the coast at the present state of sea level, and then set the boundaries of the offshore and onshore areas of the coastal buffer zone based on the typhoon waves during the 50-year return period, as shown in Figure 8 and Figure 9. The offshore boundary is bounded by the farthest range of sediment drift simulated by the SBEACH model, and the onshore boundary is set at the maximum height of wave run-up. The preliminary delineation range was verified with the current coastal resources and coastal environmental impact factors, and a comprehensive analysis was conducted to establish the final range of the coastal buffer zone [43]. 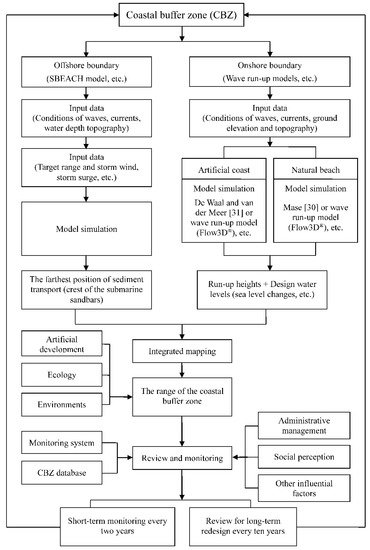 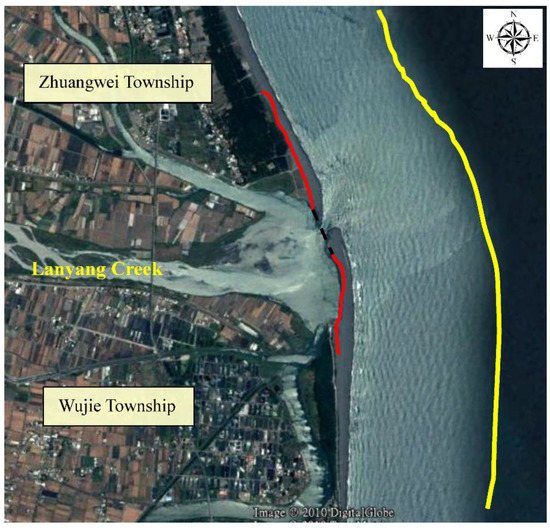 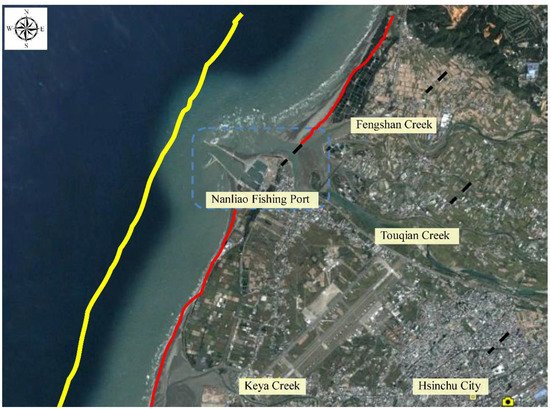