Gastric cancer(GC) is the fourth most common cause of cancer-related mortalities worldwide. The incidence rate of GC rises progressively with age, the median age at diagnosis is 70 years. GC is a multifactorial disease, and both environmental and genetic factors have a role in its aetiology. Regarding the age of diagnosis, it is divided into early-onset gastric carcinoma (EOGC; 45 years or younger) and conventional GC (CGC; older than 45). EOGC relies mostly on genetic factors and therefore provides a unique model to study genetic alterations in GCs.

In 1965 the Lauren classification of GC was established, and nowadays it is the most frequently used, compared to other available GC classifications [1]. According to the Lauren division, two histological subtypes of GC can be distinguished—intestinal and diffuse; later the indeterminate type was also included to characterize infrequent histology. Signet ring cell carcinoma is assigned to the diffuse subtype. Multiple studies have shown that the intestinal type is the most common, the second is diffuse and ending with the indeterminate type [2]. Intestinal carcinoma is characterized by visible glands and cohesion between tumour cells. The diffuse subtype encompasses poorly cohesive cells, diffusely infiltrating the gastric wall with little or no gland formation. The cells are usually small and round, also with a signet ring cell formation. There is evidence that the intestinal subtype is associated with intestinal metaplasia of the gastric mucosa and the occurrence of H. pylori infection. Some studies also revealed that the incidence of the diffuse GC subtype is higher among females and younger patients, and that this type of GC originates from the normal gastric mucosa [2].

GC development onsets are present in Figure 1, where the percentage of each carcinoma is displayed. 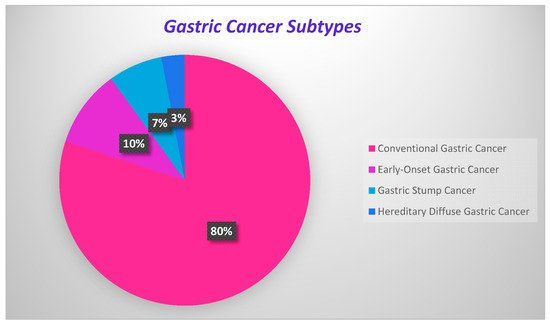 Gastric carcinomas that appear intermittently mostly occur among the older population, at over 45 years of age, and are so-called “conventional gastric cancers”. The genetic factors that cause cancer development are less important in this type of cancer, where environmental agents are prevalent [6]. Patients are diagnosed between 60 and 80 years of age. These gastric carcinomas affect mostly men, who are two times more likely to develop them than women [7][8].

Early-onset gastric cancer (EOGC) is described as a GC occurring at the age of 45 years or younger. Around 10% of GCs are categorized as EOGCs, however rates differ between 2.7% and 15%, depending on the performed cohort studies [9]. In the young population, diffuse lesions are more frequent and they are related to the background of the histologically “normal” gastric mucosa. Young patients are less exposed to environmental carcinogens, therefore, an EOGC is a good model to study genetic alterations in the gastric carcinogenesis process [10]. H. pylori infection is important for the development of tumors in EOGC patients, however, there is no statistically significant difference in the distribution of IL1β polymorphisms between young and old patients [11]. EBV infection is observed to be importantly decreased or absent in EOGCs [12]. It is postulated that around 10% of EOGCs have a positive family history [13]. It has been revealed that the early-onset type has different clinicopathological characteristics compared to the conventional subtype, which suggests that they display separate models within gastric carcinogenesis, and molecular patterns support this [14].

Gastric stump cancer (GSC) is described as a carcinoma in the gastric remnant after partial gastric resection, usually due to peptic ulcer disease (PUD). The incidence of GSC varies from 1% to 8% [15]. The major pathogenesis of GSC is biliary pancreatic reflux, provoking chronic inflammation of the mucosa, followed by atrophic gastritis, intestinal metaplasia and dysplasia. Other possible causes are achlorhydria and bacteria overgrowth, and H. pylori seem to be the main agent included in the etiopathogenesis of the GSC [16]. The surveillance of these patients with endoscopy and biopsies might allow for the early diagnosis of these patients, however, the benefit to cost ratio is still to be considered. Viste et al. (1986), made a comparison of GSC patients with other GC patients and discovered relevant differences in gender, age, staging, resectability rates and operative procedures, however, the postoperative mortality and survival rates were approximate [17].

Hereditary diffuse gastric cancer (HDGC) is an autosomal dominant susceptibility for diffuse GC, a weakly differentiated adenocarcinoma that penetrates into the stomach wall leading to the thickening of the wall, usually without producing an explicit mass. The median age of HDGC onset is around 38 years, with a range of 14–69 years [18]. HDGC should be considered for screening with several important symptoms, like two or more documented cases of diffuse GC in first- or second-degree relatives, with at least one diagnosed before the age of 50, or three or more cases of documented diffuse gastric cancer in first/second-degree relatives, independent of the age of onset [19]. When clinical characteristics and family history are insufficient, the identification of a heterozygous germline CDH1 pathogenic variant using screening with available genetic tests checks out the diagnosis and enables for family research [20][21].

Among CDH1 mutation-negative patients within HDGC families, there were displayed candidate mutations within genes of high and moderate penetrance, like: BRCA2, STK11, ATM, SDHB, PRSS1, MSR1, CTNNA1 and PALB2 [22]. Therefore, in HDGC families, with no detected alterations in the CDH1 gene, the clinical importance of other tumor suppressor genes, like CTNNA1, should be considered. CTNNA1 is concerned in intercellular adhesion and is a questionable tumor suppressor gene for HDGC. The group discovered a novel variant (N1287fs) in the BRCA2 gene, which is the first report of the occurrence of a truncating BRCA2 variant among HDGC families. That is why it is important to consider HDGC syndrome as associated to CDH1 mutations and closely related genes, then consider the clinical criteria of families with heterogeneous susceptibility profiles.