Carotenoids are important natural pigments found in all plants and some bacteria, algae and fungiand constitute one of the largest families of natural products, with more than 750 distinct compounds classified to date. Carotenoids have also been shown to have a significant impact on a number of human diseases, improving the survival rates of some cancers and slowing the progression of neurological illnesses.

The carotenoid biosynthetic pathway has been intensely studied since the early 1960s [1][2][3]. While the carotenoid biosynthetic genes are located in the nucleus, their precursor protein products are imported into the chloroplast where the mature proteins synthesis carotenoids [4]. In chloroplasts, carotenoids accumulate in the photosynthetic membranes in association with the photosynthetic reaction centres and light-harvesting complexes [5][6][7][8]. In fruits and flowers, petals chloroplasts differentiate into chromoplasts and carotenoids accumulate in the membranes or in oil bodies such as plastoglobules [9][10] and fibrils [11], or in other structures within the stroma.
Phytoene (Figure 1A), the first true carotenoid, is formed by the condensation of two molecules of geranylgeranyl diphosphate by the enzyme phytoene synthase (PSY; EC.2.5.1.32). Phytoene undergoes four consecutive desaturation steps catalysed by two enzymes, phytoene desaturase (PDS; EC.1.3.99.28), resulting in the formation of ζ-carotene (Figure 1B) via the intermediate phytofluene [12][13] and ζ-carotene desaturase (ZDS; EC.1.14.99.30) to form lycopene (Figure 1C), the red pigment responsible for the colour of tomatoes, via the intermediate neurosporene [14][15]. To maintain carotenoids in their trans form, ζ-carotene isomerase (Z-ISO; EC.5.2.1.12) [16] converts 9,15,9′-cis-z-carotene to 9,9′-cis-ζ--carotene via the isomerization of the 15-cis-double bond, and carotene isomerase (CRTISO; EC.5.2.1.13) [17][18][19] transforms 9,15,9′-tricis-ζ--carotene into 9,9′-dicis-ζ-carotene, 7,9,9′-tricis-neurosporene into 9-cis-neurosporene and 7,9-dicis-lycopene into all-trans-lycopene. These desaturation steps require the presence of the plastid terminal oxidase (PTOX; EC.1.10.3.11) as a co-factor [20][21][22][23][24].
Lycopene undergoes two cyclization reactions forming α- and β-carotene. Lycopene β-cyclase (LβCY; EC.5.1.1.19) introduces two β-rings to the ends of the Lycopene carbon chain forming β-carotene (β,β-carotene; Figure 1D) via the intermediate γ-carotene (β,ψ-carotene), which contains a single β-ring and one uncyclized end, known as psi (ψ) [25]. LβCY and lycopene ε-cyclase (LεCY; EC.5.1.1.18) form α-carotene (β,ε-carotene) (Figure 1E) by introducing one β-ring and one ε-ring respectively to lycopene via the intermediate δ-carotene (ε,ψ-carotene) with one ε-ring and one uncyclized ψ end [26].
In Lactuca sativa (lettuce), LεCY introduces two ε-rings, resulting in the formation of ε-carotene (ε,ε-carotene; Figure 1F) [27]. LεCY genes have been identified in plants, green algae and cyanobacteria (Prochlorococcus marinus), and likely arose following gene duplication of the β-cyclases and later functional divergence [28][29][30][31].
Oxygenated carotenoids are formed by the hydroxylation of the β- and ε-rings of the carotene carotenoids. β-carotene is converted to zeaxanthin (3,3′-dihydroxy-β,β-carotene) via cryptoxanthin (Figure 1G) by the action of β-carotene hydroxylase (βCHY; EC.1.14.15.24) [32][33][34][35][36], and α-carotene (β,ε-carotene) is hydroxylated by βCHY to form zeinoxanthin and then the ε-ring is hydroxylated by ε-carotene hydroxylase (εCHY; EC 1.14.99.45) to form lutein (dihydroxy-ε,ε-carotene) (Figure 1H) [37][38][39]. Lutein is essential for the assembly of the light-harvesting photosystems and plays a role in non-photochemical quenching [40][41][42][43][44][45].
Lutein has also been shown to enhance the stability of the antenna proteins [46], play a role in light harvesting by transferring energy to chlorophyll (Chl) [47] and to quench Chl triplet states in the light-harvesting complex, protecting it from photo-oxidative damage [48].
Zeaxanthin epoxidase (ZEP: EC.1.14.13.90) catalyses the epoxidation of the two hydroxylated β-rings of zeaxanthin in two steps to generate antheraxanthin (Figure 1J) and violaxanthin (Figure 1K; [49][50]. In high light, violaxanthin is converted back to zeaxanthin by the activity of violaxanthin de-epoxidase (VDE: EC.1.10.99.3). This inter-conversion of violaxanthin to zeaxanthin is called the xanthophyll cycle and is implicated in the adaptation of plastids to changing light conditions [51][52][53]. In a similar mechanism, ZEP and VDE catalyse the inter-conversion of Lutein to Lutein epoxide (Figure 1L) in a process first reported in green tomato fruit in 1975 [54].
The final carotenoid, neoxanthin (Figure 1M), is synthesized from violaxanthin by the enzyme neoxanthin synthase first cloned from tomato and potato (NYS: EC.5.3.99.9) [55][56]. In Capsicum annum, antheraxanthin and violaxanthin are modified by a unique enzyme, capsanthin/capsorubin synthase (CCS: EC.5.3.99.8), induced at the onset of ripening [57], resulting in the synthesis of capsanthin and capsorubin from antheraxanthin and violaxanthin, respectively (Figure 1N) [58][59]. CCS possesses 86.1% amino acid sequence similarity with the tomato βCHY, suggesting that the two genes evolved from a common ancestral form and that the CCS functional activity diverged at a later date [60][61]. 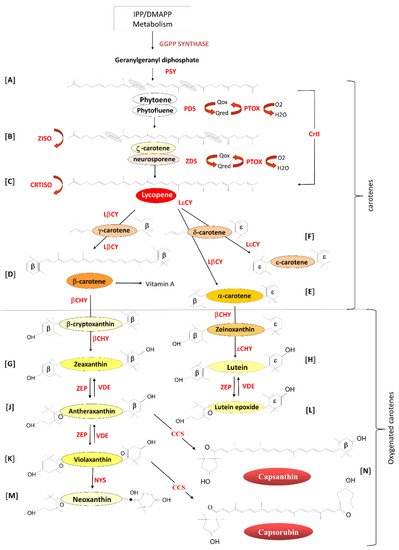 Using genetic engineering to increase carotenoid content in fruit and staple crops has the potential to increase the availability of carotenoid substrates for the generation of a host of important volatile and non-volatile organic compounds and important nutritional components of foods. Genetic engineering of the carotenoid biosynthesis has been shown to create high carotenoid varieties of key staple crops such as flaxseed (Linum usitatissimum) [63][64], wheat (Triticum aestivum) [65], Sorghum [66][67], canola (Brassica napus) [68] and rice (Oryza sativa) [69][70][71], and root crops such as potato (Solanum tuberosum) [72][73][74] and cassava (Manihot esculenta) [73]. In addition, work to produce high carotenoid varieties of tomato (Solanum lycopersicum) has been well studied [10][75][76].
Key staple crops such as rice (Oryza sativa), wheat, cassava and potato, which constitute a significant part of the diets of poorer communities, contain little or no carotenoids or carotenoid-derived compounds (CDCs). Early efforts to generate β-carotene enriched-rice (Oryza sativa), termed “golden rice” [69][70][71], by over-expressing multiple enzymatic steps in the pathway (Figure 1) successfully resulted in rice variety accumulating up to 18.4 µg/g of carotenoids (up to 86% β-carotene) [70]. In this instance, these authors over-expressed PSY with the expression of the Pantoea ananatis CrtI (EC 1.3.99.31). CrtI carries out the activities of four plant enzymes, namely PDS, Z-ISO, ZDS and CRTISO (Figure 1).

In transgenic tomato, expression of the Arabidopsis Or was shown to promote chloroplast to chromoplast differentiation inducing carotenoid accumulation at early fruit developmental [77]. Expression of AtOR under the control of an endosperm-specific promoter increased carotenoid content in corn by promoting the formation of carotenoid-sequestering plastoglobuli [78]. However, these authors showed that these increases were seen when the carotenoid pool was limited, but it had no effect when carotenoid levels where abundant [78]. In Arabidopsis, Zhou et al. [79] demonstrated that the Or protein interacts directly with PSY (see Figure 1), post-transcriptionally regulating carotenoid biosynthesis. Chayut et al. [80] demonstrated in melon (Cucumis melo) that CmOr is required to stabilize flux through the carotenoid biosynthetic pathway, but the increase in carotenoids is due to the inhibition of downstream metabolic turnover of β-carotene [80]. Or expression has also been shown to increase carotenoid content in the seeds of rice [81] and maise [78]. In rice, these increases in carotenoids were observed in conjunction with the over-expression of two photosynthetic genes ZmPSY and PaCrtI. When ZmPSY and PaCrtI were expressed together, rice grain accumulated up to 5.5 µg/g DW, increasing to 2.5µg/g DW when these genes were expressed along with the AtOr gene [81]. This is the first demonstration that a multi-gene approach, targeting both carotenoid synthesis and sequestration, has the potential to dramatically increase carotenoid levels in grain.
Furthermore, the over-expression of the pepper fibrillin in transgenic tomato showed that fibrillin proteins play a crucial role in development of plastoglobules and fibrils in differentiating chromoplast [10]. In transgenic tomato, over-expression of Fibrillin was shown to delay thylakoid loss during chloroplast to chromoplasts differentiation, increase plastoglobuli number and thereby increase the concentrations of carotenoids including β-carotene (+64%) and lycopene (+118%) [10]. These carotenoids were further shown to increase the pool of substrates for volatile formation, and fruit were shown to generate a 36% and 74% increase in β-carotene-derived volatiles β-ionone and β-cyclocitral, respectively. Furthermore, an increase in the lycopene-derived volatiles citral (+50%), 6-methyl-5-hepten-2-one (MHO; +122%) and the ζ-carotene-derived geranylacetone (+223%) were observed to be consistent with the increases in carotenoids in these fruit [10]. These results demonstrate that increasing carotenoid content in fruits, vegetables and other crops provides a substrate for the formation of important volatile and non-volatile organic compounds important to plant development, flavour and aroma.

Carotenoid cleavage dioxygenases 4 knockout (ccd4-1) had an even higher impact on seed carotenoid levels. Total carotenoids in ccd4-1 increased by 270% and β-carotene alone increased by a remarkable 840% compared with the wild type [82]. The more significant carotenoid turnover in ccd4-1 mutants compared to ccd1-1 mutants may be linked to their subcellular location. CCD1 has been shown to be localized in the cytosol, where it may have access to carotenoids stored in the plastid envelope [83][84][85], whereas CCD4 has been shown to be localized to the chloroplast and plastoglobules [86] where carotenoids are stored, giving them easier access to these substrates. Combining ccd4-1 and ccd1-1 into a single background increased carotenoid levels in Arabidopsis seed by 360% compared with ~170% and 270% for ccd1-1 and ccd4-1 alone.
These data suggest that CCD1 and CCD4 are important actors in carotenoid turnover and that whilst CCD4 has a more important role, likely due to its chloroplastic localisation, the two work together, and combined ccd1 and ccd4 mutants have a synergistic effect on the accumulation of carotenoids in Arabidopsis seeds. Furthermore, a mutation in ccd4 in peach (Prunus persica) was shown to result in a yellow fleshed variety due to the accumulation of carotenoids compared to the white flesh of the wild type [87].
Furthermore, work to evaluate the impact of CCDs on carotenoid turnover, authors used transgenics to knockout (KO) CCD1 or CCD4 in planta. Ohmiya et al. [88] used RNAi to silence CCD4a in Chrysanthemum (Chrysanthemum morifolium) resulted in a change of petal colour from white to yellow and Campbell et al. [89] down-regulated CCD4 in potato tubers resulting in a yellow flesh variety .
Down-regulation of CCD1A and CCD1B in tomato (antisense construct) resulted in a significant reduction in the rates of emission of pseudoionone, geranylacetone and β-ionone in cut tomato fruits, volatiles generated by the 9–10(9′–10′) cleavage of lycopene, ζ-carotene and β-carotene, respectively. However, these authors did not observe significant changes in the carotenoid content of these fruits [83]. In tomato, CCD1A and CCD1B are not plastid-localized, and it is not unexpected that plants with greatly reduced CCD1 expression showed insignificant alterations in carotenoid content, given that tomato fruit accumulate a significant amount of carotenoids during ripening, and any small turnover may go unnoticed.
These areas of exploitation thus require additional research to explore the contribution of jointly manipulating ‘push’, ‘pull’ and ‘block’ mechanisms to increase carotenoid content to improve the nutritional quality of food stuffs. Carotenoids have furthermore been shown to have important health benefits when consumed as part of a balanced diet . Manipulating carotenoid biosynthesis and sequestration also offers the potential to modify the flavour and aroma of fruit, grain or leaves. However, it should be noted that blocking the carotenoids turnover could negatively impact CDCs nutritional importance. Carotenoids, via these activities of carotenoid cleavage enzymes, provide the building blocks for a number of volatile and non-volatile organic compounds of physiological importance for plant development.

3. ’Hidden Hunger’ and the Health Benefits of Carotenoids