Humiria balsamifera (Aubl), commonly known as “mirim”, is a plant of the Humiriaceae family, which consists of 39 species divided between eight genera: Duckesia, Endopleura, Humiria, Humiriastrum, Hylocara, Sacoglottis, Schistostemon, and Vantenea. This study aimed to characterize H. balsamifera extracts by LC-MS/MS and evaluate their antimicrobial potential through in vitro and in vivo assays.

Microorganisms are naturally well-spread out in the environment, and they can easily reach surfaces people come into contact with, including food products, whether at the harvest, slaughter, processing, or even packaging. Once in contact with the food, they start their growth process by consuming nutrients and causing the product to deteriorate [1][2][3].
Bacteria, fungi, viruses, and protozoa are the main microorganisms responsible for food contamination, infecting humans through the consumption of beef, fish, poultry, eggs, unhygienic fruits and fresh produce, causing a variety of diseases [4][5]. The World Health Organization estimates that one in 10 people worldwide become ill after consuming contaminated food and about 420,000 people die each year, resulting in the loss of 33 million healthy life years (DALYs) [2][6].
Bacteria represent an added concern for health and food safety organizations, especially those able to grow at low temperatures and resist a wide range of temperature variations [7][8]. Bacterial pathogens such as Escherichia coli, Salmonella enterica, Listeria monocytogenes, and Staphylococcus aureus, among others, are responsible for several global foodborne outbreaks and cause life-threatening illnesses such as diarrheal diseases [5][9][10][11][12]. Another problem in fighting bacteria is their ability to develop resistance to conventional antimicrobials. These pathogens can use various strategies to inhibit the effects of antimicrobials, such as the production of inactivating enzymes, reduction of outer membrane permeability, efflux system, and blocking or altering the target site of antibiotics, further motivating the research focused on finding alternative ways to combat them [13][14].
In the search for new effective substances against resistant pathogens, several secondary metabolites from plants and endophytic microorganisms have shown promise [15][16]. Most of the drugs used in general today were developed based on ethnopharmacological knowledge [17][18][19], indicating that the chemistry of natural products is a big ally in the development of therapeutic agents [20][21].
The plant species Humiria balsamifera (Aubl), popularly known as “mirim”, presents interesting biological activities. The literature reports, most of all, anti-inflammatory [22][23], antimalarial [24], antioxidant [25][26], and antifungal activity [27], highlighting the therapeutic potential of this plant. Some substances isolated from this species so far have already been reported as well, such as bergenin, arjunolic acid, friedelin, lupeol, phytol, caryophyllene oxide, epoxide humulene, and trans-isolongifolanone, among others [24]. However, the antibacterial and antibiofilm activities of its derived products have not been extensively examined. Thus, this work aims to characterize and evaluate the effectiveness of H. balsamifera extracts in terms of the antimicrobial and antibiofilm activities against foodborne pathogens (Escherichia coli ATCC 25922, Listeria monocytogenes ATCC 15313, Salmonella enterica Typhimurium ATCC 14028, and Staphylococcus aureus ATCC 6538). The in vivo antimicrobial action of the most active extract was analyzed using a method based on the infection of Tenebrio molitor larvae.

3. Evaluation of the Antibiofilm Activity of Humiria balsamifera (Aubl) Extracts

Since the leaf extracts of Humiria balsamifera presented better inhibition results against S. aureus, their antibiofilm action at subinhibitory concentrations (0.5 × MIC, 0.25 × MIC, 0.125 × MIC, and 0.0625 × MIC) was also evaluated (Figure 1). The EALE and the HLE reduced biofilm production by S. aureus by nearly 25% at concentrations higher than 390 µg/mL (Figure 1A,B). The MLE did not exhibit significant antibiofilm activity (Figure 1C). Considering the results for the antimicrobial and antibiofilm activities, the EALE was chosen to proceed to the in vivo tests, using Tenebrio molitor larvae. 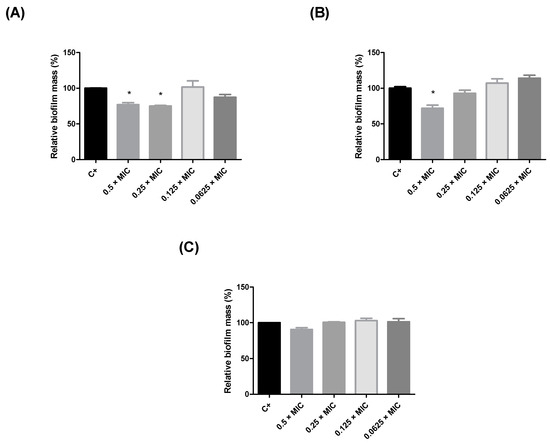 Analyses of the leaf and stem bark extracts of Humiria balsamifera (Aubl) by HPLC-ESI-IT/MS in negative-ion mode identified 11 molecular ions (Table 2, Table 3 and Table 4). Their structures were proposed (Figure 3) based on the fragments originated from the molecular ion by multi-stage mass spectrometry (MSn). The mass spectrometry ionization source was the electrospray (ESI). The ESI source may not have ionized the compounds like steroids and triterpenes. It was possible to identify only phenolic compounds in the extracts. From the 11 identified substances, seven were flavonoids (gallocatechin, kaempferol 3-neohesperidoside, sophoricoside, quercetin 3-arabinoside, quercetin-O-rhamnoside, kaempferol-dirhamnoside, and vitexin-dirhamnoside); three were coumarins (bergenin and two derivatives: galloylbergenin and hydroxybenzoyl bergenin); and one was an oligosaccharide (maltotetraose). 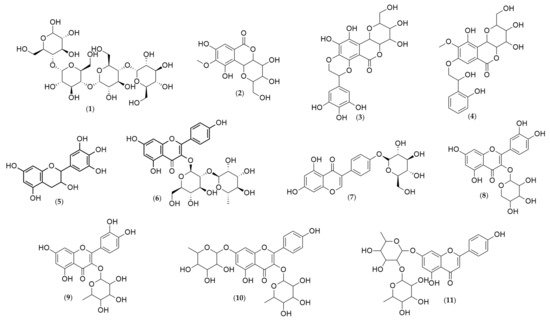 This research aimed to characterize and evaluate the antimicrobial potential of the extracts of Humiria balsamifera (Aubl), also known as “mirim”. This species belongs to the Humiriaceae family, and its tea is used in many Brazilian regions for its anti-inflammatory action, especially for treating uterine inflammation [22][23].
Analyses of the leaf extracts by HPLC-ESI-MS and FIA-ESI-IT/MS led to the identification of 11 substances, 10 of which had not yet been reported for this species: seven flavonoids (gallocatechin, kaempferol 3-neohesperidoside, sophoricoside, quercetin 3-arabinoside, quercetin-O-rhamnoside, kaempferol-dirhamnoside, and vitexin-dirhamnoside); one oligosaccharide (maltotetraose), bergenin; and two derivatives (galloylbergenin and hydroxybenzoyl bergenin).
The substances present in the chemical composition of H. balsamifera tell a lot about the species. Flavonoids, according to the characterization presented in this study, are the most abundant class of compounds. These substances exhibit high bioactive potential and present anti-ulcer, antioxidant, anti-inflammatory, anti-allergic, antitumor, antiviral, antifungal, and antidiabetic activities [34][35][36][37].
Antimicrobial tests with flavonoids have received increasing attention in recent years, since these compounds are synthesized by plants in response to various types of stress, including microbial infections [38][39][40]. Researchers are also interested in how flavonoids are able to exhibit antibacterial activity through mechanisms different from conventional drugs, hindering the development of microbial resistance [41][42].
During this study, the H. balsamifera extracts were subjected to three tests for the evaluation of their antimicrobial potential against different bacteria strains. By the end of the in vitro tests, the extracts which presented the best results were selected for the in vivo anti-infective assay using T. molitor larvae. Our results showed that the H. balsamifera ethyl acetate leaf extract (EALE) showed efficacy against S. aureus, one of the most resistant pathogens in existence, in all three tests (MIC, antibiofilm potential, and the tests in vivo). The efficacy of this extract is believed to be due to the flavonoids present in its composition. Flavonoids are well-known in the literature, as other polyphenols, to be able to inhibit microbial growth through several mechanisms, such as the inhibition of ATP synthesis in the electron transport chain, inhibition of nucleic acid synthesis, inhibition of the efflux pump, inhibition of biofilm formation, inhibition of virulence factors, inhibition of quorum sensing, membrane disruption, inhibitors of bacterial toxins, and inhibition of cell envelope synthesis [41][43][44].
Bergenin, identified in the three extracts analyzed, has already been reported in H. balsamifera [24] and other two species from the Humiriaceae family: Endopleura uchi and Sacoglottis gabonensis [45][46]. This isocoumarin and its derivatives, such as the identified flavonoids, can be directly related to the antimicrobial activity of the extracts against S. aureus. A recent study showed that six synthetic derivatives of bergenin obtained by Williamson synthesis inhibited S. aureus growth, especially 8,10-dihexyl-bergenin and 8,10-didecyl-bergenin, which presented the most promising MIC value: 3.12 µg/mL [47].
Besides antimicrobial activity, bergenin has also been pointed out as one of the main substances responsible for antimalarial [24], anti-inflammatory [48][49], antinociceptive [50], anxiolytic [51], and antioxidant activities [52][53].