The biological component used in enzyme-based biosensors is an enzyme. Enzymes are biological macromolecules with catalytic activity, high selectivity, and responsible for speeding up biochemical reactions under mild conditions [1]. These macromolecules can attach to one particular molecule or analyte, but not others to ensure the analyte selectivity. Due to their high specificity, simplicity, and scalability, enzyme-based biosensors represent a fast, precise, and continuous monitoring of analytes [2]. Additionally, the high specificity of enzymes enhances the ability to detect lower analyte concentration limits [3]. Additionally, the catalytic action can be influenced by the substrate concentration, temperature, pH, and inhibitor presence [3]. The enzyme functions could be the generation of electroactive species or an electroactive reactant’s consumption, causing the direct measurement of the analyte [4], or for oxidation or reduction of a molecule, which can be monitored electrochemically [5].
The crucial factor in enzyme-based biosensors is the assembly or immobilization of the enzyme on the electrode surface [6]. If the immobilization is not correctly done, the accessibility of the active site, the stability through time, and the enzyme’s reusability could be affected. The enzymes can be immobilized on the transducer surface to improve the stability and reproducibility of the detection. The choice of support material is essential for conferring stability, selectivity and even improve enzyme activity. Consequently, the support material must be inert, stable, and resistant [7]. The immobilization technique is highly significant; without immobilization, the enzyme cannot be stable and reusable. The immobilized enzymes can be used continuously and can maintain their catalytic activity. Adsorption, covalent bonding, crosslinking, encapsulation and entrapment are the main methods used for immobilization [8][9]. The simplest methods are adsorption, encapsulation, and entrapment. Adsorption is inexpensive and straightforward; however, the enzymes have weak associations with the support [7]. Entrapment gives the enzyme high stability; however, the matrix can interfere with substrates’ diffusion to the enzyme’s active site. Covalent bonding is the most used method because a stable complex between the enzyme and support is generated [6]. Nevertheless, the formation of the covalent bonding could affect the enzyme activity. Crosslinking immobilization improves the stability and efficiency due to the stable binding between enzymes, generally formed with a reactant as glutaraldehyde. However, with reagents, conformational changes in the structure can affect the enzyme activity [10].
Even though the advantages of using enzymes, some disadvantages, such as the rapid loss of enzyme activity due to its interactions with the electrode surface, cause a biosensor’s lifespan is only 2–4 weeks. However, if the enzyme is well stabilized, this can increase [11]. Therefore, choosing a suitable matrix and an excellent strategy to immobilize the enzyme [9]. Enzyme-based biosensors have tremendous applications in food, medicine, and environmental monitoring. Oxidoreductases and peroxidases are the most-reported enzymes in biosensors because they are very stable catalyzing oxide reduction reactions [12]. In this section, we will focus on glucose oxidase (GOx), horseradish peroxidase (HPR), and laccase (Figure 1); these enzymes have been successfully used for different applications in biosensors. 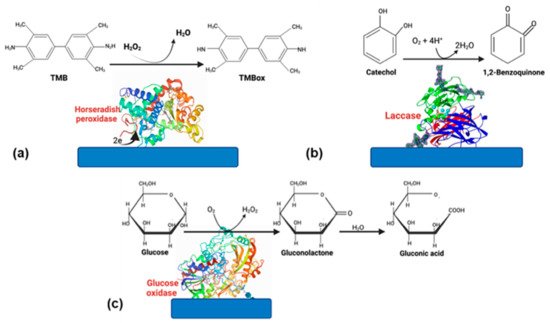 Horseradish peroxidase (HRP, EC 1.11.1.7) is an enzyme that belongs to the group of oxidoreductases. HRP is extensively distributed in nature, and its purification process is relatively simple. The principal source of extraction is the horseradish root. Some advantages reported are high activity and selectivity, resistance to inhibition by substances over a vast concentration, high operability, and reliability over a broad range of treatment conditions [13][14]. In addition, it can catalyze organic and inorganic substrates’ oxidation by reacting with H2O2 and similar molecules [15]. Therefore, HPR is has been widely used in biosensors for H2O2 determination [11].
The detection mechanism of the H2O2 biosensor depends on the electrode (modified or not) and whether the mediator is used or not. The mediator facilities the electron transfer between enzymes and electrodes. In the presence of a mediator, the H2O2 in the solution is reduced by the HRP. On the other hand, the mediator is oxidized in the enzymatic reaction by itself. Moreover, the oxidized mediator is finally reduced on the electrode, with a change in the current. If the mediator is not present, the enzyme is converted to its oxidized form after being reduced at the electrode surface by direct electron transfer [16].
Hydrogen peroxide is an essential intermediate in enzymatic reactions. The detection of H2O2 is essential in medicine, food, and environmental assays (Table 1). As a result, the development of biosensors for H2O2 detection has been extensive [11]. Different materials have been reported to improve the response between the electrode and the HRP enzyme, for example, gold nanoparticles (AuNPs), cadmium sulfide, nanofibers, carbon nanomaterials. Carbon nanomaterials have unique properties, such as good biocompatibility, fast electron transfer, and excellent mechanical flexibility. Feizabadi et al. [11] immobilized HRP on a modified multi-walled carbon nanotube by γ- aminobutyric acid (GABA) on a glassy carbon electrode. The covalent bonding formed between the enzyme and GABA increased the stability and reproducibility of the biosensor. Due to its characteristics as low detection (0.13 µM) and extensive linear range (0.2 to 281 µM for H2O2), the biosensor could be used to quantify H2O2 in human plasma.
Da Silva Freires et al. [17] developed a biosensor based on copper (I) sulfide (Cu2S) and HRP immobilized on a fluorine-doped tin oxide modified glass slide (FTO) for the determination of 1,4-dihydroxybenzene (DHB). The biosensor showed good selectivity for DHB, and good accuracy when DHB was determined in skin cream samples, presenting recovery percentages for the analyte in the samples between 99.89 and 100.70%, suggesting a good accuracy of the proposed method.
For cancer detection, exosomes can be an alternative as it is a non-invasive technique. Additionally, it is desirable for a cost-effective and instance detection in clinical diagnosis. Zeng et al. [18] developed a versatile biosensor to detect cancer-derived exomes (HepG2 cell-derived). HRP encapsulated DNA nanoflowers were the recognition elements and signal generation. A change of color was proportional to the concentration of exosomes. The system showed a satisfactory colorimetric response toward target exosomes within the working range from 5.0 × 103 to 5.0 × 106 particles/μL at a low detection limit of 3.32 × 103 particles/μL. López-Marco et al. [19] used HRP in a 3D-printed graphene/polylactic electrode and compared the detection of H2O2. The AuNPs facilitate and enhance electron transfer. However, they found that biosensors without AuNPs displayed better stability over time. The response of biosensors was evaluated in human serum.
Table 1. Horseradish peroxidase biosensors.

Nowadays, measuring blood glucose has been widely studied due to its relevance for health care [25]. Glucose oxidase (GOx) is the principal enzyme used for the devices of glucose monitoring. It is a glycoprotein that possesses orthophosphates proteins. This enzyme has unique properties such as dispersibility in water, resistance to precipitation, and stability. All these advantages make GOx efficient for glucose monitoring in blood or saliva [25]. The continuous monitoring of glucose is vital in diabetes mellitus disease. Therefore, the production of a simple, cost-effective, accurate, and rapid sensor is essential. GOx has still been used for glucose detection due to its reliable stability and substrate specificity. The principle of its operation is the enzymatic oxidation of glucose and after the electrochemical oxidation of H2O2 [26].
Electrochemical biosensors have been used to detect glucose using GOx (Table 2) [27]. The GOx enzyme converts the glucose to gluconic-d-lactone by reducing the flavin adenine dinucleotide (FAD) to FADH2. Then, H2O2 is produced due to FADH2 deoxidized by dissolved O2. Subsequently, the H2O2 is oxidized to O2 when a working potential is applied, and the electric current produced in the biosensor is proportionate to the glucose concentration [28]. The incorporation of nanomaterials as biosensor components has enhanced their performance. Bagyalakshmi et al. [27] prepared ZnO nanorods with chitosan. GOx was immobilized by the adsorption method. The ZnO nanorods were a successful platform for the immobilization of GOx due to their high surface area and displayed a good performance for displaying glucose. The use of carbon nanotubes in glucose biosensors have been improved the enzyme stability and specificity. Jayakumar et al. [29] reported an adsorbed osmium-based redox polymer crosslinked with GOx. It was possible to use less nanoconjugate due to the covalent bond between GOx and multiwalled carbon nanotubes (MWCNTs). Green approaches also have been made for the development of glucose biosensors. Yang et al. [30] developed an enzyme electrode based on AuNPs, PNE, and GOx for glucose detection by a green method. The biosensor presented high sensitivity to glucose and high response of fewer than 3 s. Redox mediator p-benzoquinone was added to enhance the linear detection range and sensitivity
Table 2. Glucose oxidase biosensors.

Laccase (benzenediol: oxidoreductase, E.C. 1.10.3.2) is a multi-copper oxidase considered a green catalyst due to combines the four-electron reduction of dioxygen to water with the one-electron oxidation of four substrate molecules [32][33]. Laccase can be produced by insects, plants, bacteria, or fungi. It is considered a suitable enzyme due to its excellent catalytic properties [34][35]. The substrate range is vast, and they can oxidase different compounds, resulting in the application of numerous biotechnological applications such as environment, food, and biosensors (Table 3) [36].
The laccase biosensor is of the third-generation type. Due to direct electron transfer between the electrode and enzyme, there is no need for a mediator. Laccases are immobilized on the electrode’s surface, and they are oxidized by oxygen and then are reduced by the substrate acting as electron donors for the oxidized form of the enzyme. A reduction current will be observed to reduce the products, which is proportional to their concentration. Unlike peroxidases, laccase-based biosensors only need oxygen and are already present in the solutions, so it is unnecessary to H2O2 for its catalysis [37].
Laccase biosensors have been used widely for dopamine detection. However, even when some analytes’ determination as dopamine has been studied extensively, novel techniques and approaches have been developed. Wardak et al. [38] constructed a laccase-based biosensor constructed by Soft Plasma Polymerization technique for dopamine detection. This technique enhances the sensitivity, and it was proved for pharmaceutical samples with satisfactory results. Furthermore, the use of polysaccharides has been explored. An exopolysaccharide (EPS) named botryosphaeran, and MWCNT were used to immobilize laccase on a glassy carbon electrode to detect dopamine. Even in the presence of other molecules as uric acid, the biosensor could determine the presence of dopamine [39]. Additionally, the fluorescence principle has been used for dopamine detection. Sangubotla and Kim [40] developed a fiber-optic biosensor with carbon dots and laccase. This material presents excellent features such as hydrophobicity, tunable photoluminescence, and biocompatibility.
Table 3. Laccase biosensors.

Another commonly used enzyme in biosensors is the tyrosinase, a polyphenol oxidase (Table 4). Tyrosinase is a natural enzyme that may be produced by bacteria, fungi, plants, and mammals. This enzyme catalyzes the oxidation of various phenolics compounds, and their reaction products could be detected by voltamperometric biosensors [46]. The versatility of this enzyme allows it used in the environmental, medical and food field. García-Guzmán et al. [47] developed a biosensor index in beers and wines using caffeic acid as the reference. The biosensor displayed good analytical performance. Additionally, tyrosinase was used in the environmental field for the construction of a biosensor for detection of bisphenol A in water [48]. Alkaline phosphatase (ALP) is extensively used in the diagnosis and monitoring of many diseases. This enzyme catalyzes the dephosphorilation of proteins, biomolecules and nuclei acids. A higher level of ALP is related with tumors, biliary obstruction and diabetes [49]. Moreover, it can be used to detect organophosphate pesticide through catalyzes. Stéfanne e Silva et al. [50] immobilized ALP onto a modified non-commercial, low cost and nonrefundable pencil carbon graphite with three polymers derived from hydroxybenzoic acids for pesticide detection. Urease is an enzyme used for the urea detection, its levels are directly related to the protein intake and nitrogen metabolism in humans. Kim et al. [51] developed a portable biosensor for real time monitoring of the flow of physiological fluids on a porous polytetrafluoethylene.
Table 4. Other enzymes commonly used in biosensors.