The development of sulfonated hydrocarbon polymer (SHP)-based polymer electrolyte membranes (PEMs) has been pursued in order to overcome drawbacks of the perfluorosulfonic acid ionomer-based PEMs in fuel cell applications. To improve the proton conductivity of SHP-based PEMs without deterioration in physicochemical stability, control of polymeric architecture is necessary to form distinct phase-separated structures between the hydrophilic and hydrophobic domains. By pursuing rational design strategies for the copolymer architectures, it will be possible to develop high-performance SHP-based PEMs in fuel cell applications. This study focused on the synthetic procedures which underlie structure-engineered copolymers and their PEM properties.

Recently, interest in eco-friendly alternative energy has increased due to the depletion of fossil fuels and environmental pollution, many countries are making great efforts to develop renewable energy technologies that can replace fossil fuels [1]. In particular, studies that utilize hydrogen as an energy source are being actively conducted [2][3][4]. As the most abundant element in the universe, there are clearly no concerns with its depletion. The fuel cell is an eco-friendly energy conversion device that can generate electrical energy by the electrochemical reaction between the fuel supplied (mainly hydrogen) and oxidizers [5]. Unlike conventional power generation technologies, fuel cells can efficiently utilize hydrocarbon-based energy sources without emission of noise or vibration. Furthermore, since combustion process is not required, harmful substances such as nitrogen oxides (NOx) and sulfur oxides (SOx) are not generated during operation [6]. As shown in Table 1, fuel cells can be classified according to the type of electrolyte they use, and include alkali fuel cells (AFCs), molten carbonate fuel cells (MCFCs), solid oxide fuel cells (SOFCs) and polymer electrolyte membrane fuel cells (PEMFCs) [7][8][9][10].
Table 1. Classification of fuel cells.
In particular, PEMFCs have been studied intensively due to their high energy efficiency (even at low temperature) and the numerous applications they have proven suitable for, such as electric vehicles and portable devices (Figure 1a). Among the various components that constitute PEMFCs, polymer electrolyte membranes (PEMs) that provide a pathway for proton transport and prevent the permeation of the supplied fuels and electrons are regarded as the key component [11]. It is well known that protons can be transported from the anode to the cathode through the interconnected ionic clusters formed by phase separation between hydrophilic–hydrophobic domains in PEMs [12][13]. Therefore, the polymers used in PEMs should have hydrophobic segments that can maintain the membrane stability and hydrophilic segments containing fixed anionic groups that can transport protons [14]. Due to the high selectivity of PEMs regarding the target molecules, the possible wide application of PEMs as solid or gel-type electrolytes in various energy conversion and storage devices such as solar cells and secondary battery systems have also been recently studied [15][16][17][18][19][20][21][22]. In addition, considerable experimental and theoretical studies have also been performed to elucidate the effective diffusivity for the target molecules in PEMs used in such energy devices [23][24]. 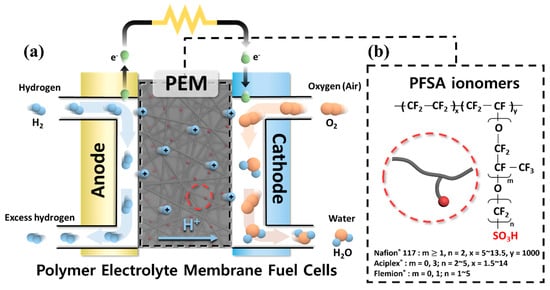 Figure 1. (a) Schematic diagram of polymer electrolyte membrane fuel cells. (b) Chemical structures of perfluorosulfonic acid ionomers.
After decades of research, perfluorosulfonic acid (PFSA) ionomer-based PEMs such as Nafion®, Aciplex® and Flemion® have been developed and applied in commercialized PEMFC vehicle systems including the Toyota Mirai (2015), the Honda Clarity (2016) and the Hyundai Nexo (2018) [25]. This is because the PFSA ionomers, shown in Figure 1b, are composed of a hydrophobic perfluoro backbone and the flexible hydrophilic side chains containing sulfonic acid groups, the interconnected ionic clusters formed by the phase separation between the hydrophobic and hydrophilic domains are well developed (Figure 2). Therefore, the PFSA ionomer-based PEMs can maintain high proton conductivity despite their low ion exchange capacity (IEC) and reveal outstanding physical stability even under highly humidified operating conditions. In addition, since the PFSA ionomers are mainly composed of C-F bond having a strong bonding energy (485 kJ/mol at 273 K), the corresponding PEMs exhibit outstanding chemical stability under the harsh operating conditions of PEMFCs [26][27]. Nevertheless, the use of PFSA ionomer-based PEMs still has inherent drawbacks, which include limited operating temperatures due to their low glass transition temperature, expensive manufacturing costs due to the complicated synthetic process and environmental problems caused by production of toxic pollutants (e.g., HF) during the disposal process [28]. These drawbacks have prompted the development of alternative PEMs via different strategies which have included modifying the PFSA-ionomer structure, introducing inorganic/organic composite materials and developing sulfonated hydrocarbon-based polymers [11][29][30]. 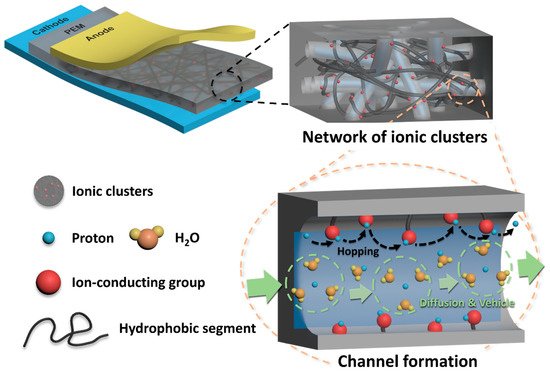 Figure 2. Schematic diagram of ionic clusters formed in polymer electrolyte membranes.
The sulfonated hydrocarbon polymers (SHPs) have been intensively studied due to their outstanding thermal stability, high mechanical strength as well as low fuel cross-over [31][32][33][34]. In addition, it is possible to develop PEMs at low cost due to the relatively convenient synthetic process compared to that of the PFSA ionomers. Moreover, various types of SHPs with different IECs can be obtained by incorporating diverse monomers and/or by post-modification of intermediates [35][36][37]. Representative SHP structures including sulfonated poly(arylene ether sulfone) (SPAES) [38][39][40][41][42][43], sulfonated poly(ether ether ketone) (SPEEK) [44][45], sulfonated poly(phenylene oxide) (SPPO) and sulfonated polyimide (SPI) [46][47] are shown in Table 2. Although PEMs with these polymers have been studied as alternatives to the PFSA ionomer-based PEMs due to the advantages described, the proton conductivity of the SHP-based PEMs is generally lower than that of the PFSA ionomer-based PEMs, because the interconnected hydrophilic channels are not as well developed as PFSA ionomer-based PEMs [48]. Typically, SHPs having a high degree of sulfonation (DS) can form large hydrophilic domains, resulting in high proton conductivity. However, when the DS of SHPs is high enough to reach a comparable proton conductivity as that of PFSA ionomer-based PEMs, they do not maintain the necessary high physicochemical stability for PEMFC operation [30][49][50]. To improve the proton conductivity of SHP-based PEMs without the deterioration in physicochemical stability, structural engineering of the SHPs has been conducted to form distinct phase-separated structures of the hydrophilic and hydrophobic domains, similar to those of PFSA ionomers [51][52][53]. It is generally known that control of hydrophilic and hydrophobic segments within SHPs can be achieved by the preparation of block, graft/comb-shaped and densely sulfonated copolymers [54][55][56]. Therefore, this study reports on recent research trends related to the development of SHP-based PEMs showing high performances in PEMFCs by pursuing rational design strategies for the copolymer architectures.
Table 2. Representative structures of sulfonated hydrocarbon polymers used in polymer electrolyte membrane fuel cells.

In general, sulfonated hydrocarbon polymers synthesized via the nucleophilic aromatic substitution reaction between dihalo monomers with or without sulfonic acid groups and difunctional monomers with nucleophiles (e.g., dihydroxy and dithiol) are composed of randomly distributed hydrophilic and hydrophobic moieties due to the random distribution of hydrophilic sulfonic acid groups (Figure 3). Therefore, the PEMs prepared by random copolymers usually exhibit lower proton conductivity compared to the PFSA-based PEMs, especially at low relative humidity (% RH) conditions, due to the low hydrophilic/hydrophobic phase separation behavior which forms the small ion-conducting channels [57][58]. Therefore, structural engineering of SHP-based polymer beginning with the synthetic process is highly required to control the nano-phase structures of the resulting PEMs. 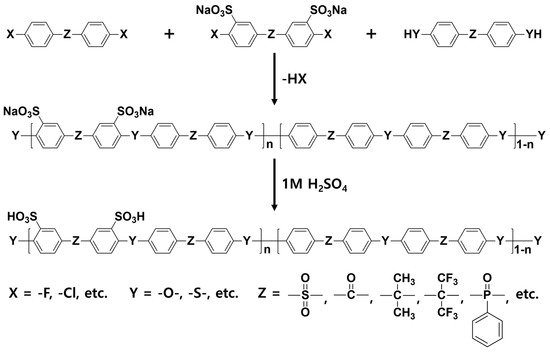 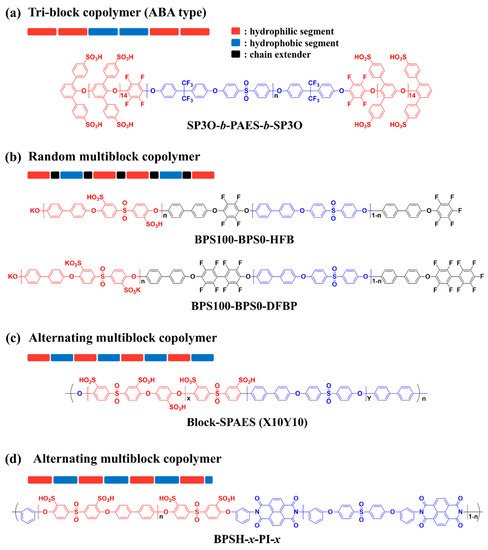