Essential oil (EO)-based mouthwashes have been used for oral health maintenance due to their antimicrobial and anti-inflammatory properties. The aim was to review clinical trials that assessed the role of EO-based mouthwashes in controlling gingivitis in patients undergoing fixed orthodontic treatment (OT).

Essential oils (EOs) are organic compounds that are extracted from plants with various distillation methods [1]. Historically, they have been utilized in process of manufacturing perfumes due to their strong and characteristic scent, as well as in food and beverage industries [2]. The EO-derivatives possess anti-inflammatory and antimicrobial properties and have been used in the field of clinical dentistry and related research [3]. Lavender, peppermint, cinnamon and clove oils have been shown to have an inhibitory effect on different bacteria and fungi [3]. Recently, EO-derivatives were found to be efficient in the management of orofacial pain due to their analgesic properties [4][5]. Furthermore, studies indicated that EOs are capable of the management of dental anxiety before certain surgical procedures [6][7].

Patients undergoing fixed orthodontic treatment (OT) are more prone to gingival inflammation because fixed orthodontic appliances are bulky and create a favorable environment for plaque accumulation [8][9]. Mechanical plaque removal poses a challenge for orthodontic patients and different strategies have been implemented in order to control plaque formation, prevent the development of gingivitis and maintain oral health [9]. More specifically, chemotherapeutic agents with antimicrobial properties, such as 0.12% chlorhexidine (CHX), have been proposed as an adjunct to the standard oral hygiene protocol [10]. However, prolonged use of these agents has been associated with side effects, such as hypersensitivity reactions, burning sensation and changes in taste and tooth color [11][12]. Another potential approach for the management of oral health in orthodontic patients is the use of EO-containing mouthwashes due to their antimicrobial and anti-inflammatory properties [13]. A recent study [13] investigated the effectiveness of mouthwash with 1% Matricaria chamomilla L. (MTC) in the management of gingivitis during OT, by comparing it to CHX and a placebo mouthwash. The authors concluded that the use of both CHX and MTC mouthwash significantly reduced gingival inflammation compared to the use of the placebo mouthwash [13]. Listerine ® is another EO-containing mouthwash that has been studied in the literature [14].

A meticulous search of indexed literature revealed 63 studies. After title and abstract screening and removal of the duplicate studies, 17 studies were retrieved and evaluated in more detail. Eleven studies were excluded after full-text evaluation because they did not meet the eligibility criteria. In total, six studies (three RCTs, three non-RCTs) were included and processed for data extraction ( Figure 1 ). 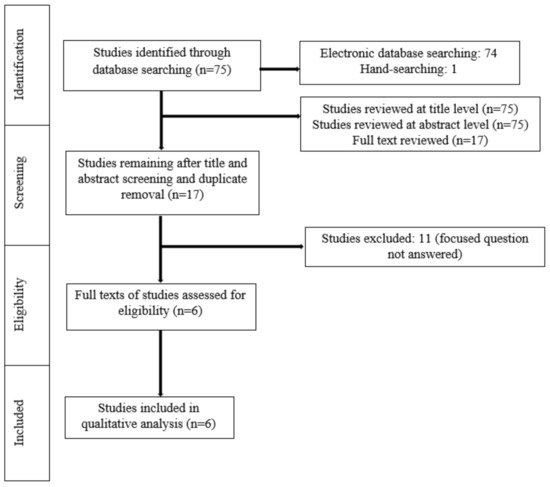 Based upon the limited evidence available, EO-based mouthwashes seem to be effective for the management of gingivitis among patients undergoing fixed OT. Further well-designed and power-adjusted clinical trials are needed.