Figure 1. Schematic representation of LIM domain 2 (LIM-2) composed of two zinc fingers, above, with the complete protein structure of FHL2 based on X-ray structures of the independent LIM domains and Alphascreen computation (AF-Q14192-F1-model_v1.PDB: https://alphafold.ebi.ac.uk/). Accessed in July 2021.
The LIM domains allow FHL2 to interact with a variety of other proteins, resulting in an impressive interactome comprising more than 92 targets known to date [1]. Upon binding of FHL2, the conformation of target proteins may alter and consequently their post-translational modifications, their cellular localization, or their interactions with other proteins may change. Thus, FHL2 acts as a scaffold protein and can adjust the structure, activity, and function of its interaction partners. In contrast to the findings regarding many zinc fingers which indicate their ability to bind to DNA, the zinc-fingers of FHL2 lack this ability. Therefore, FHL2 does not directly regulate gene expression. However, FHL2 is of course still able to regulate gene expression via interaction with transcription factors and their upstream co-regulators [2]. Through binding to its target proteins, FHL2 modulates and fine-tunes signal transduction pathways and subsequent gene regulation, which is important in the function of various tissues and their pathologies.
FHL2 is expressed most abundantly in the heart, blood vessels, ovary, and skeletal muscle, and to a lesser extent in several other organs [3][4][5][6]. FHL2 expression and function have been studied in a number of diseases, including various types of cancer [7][8][9][10], cardiovascular disease [3][4][6][11][12][13], and overall metabolism [14]. At present, information regarding the exact regulation of FHL2 expression is limited [15][16]. Several genome-wide association studies (GWAS) have shown association between FHL2 single nucleotide polymorphisms (SNPs) and complex diseases and traits [17][18][19]. While informative, FHL2 SNPs alone are unlikely to be sufficient to elucidate the role of FHL2 in complex multifactorial traits and maladies.
Growing evidence supports the notion that epigenetics, and in particular DNA methylation, mediates the connection between environment and gene expression across the human body. The human DNA methylation pattern or ‘methylome’ shows considerable variation and is indeed responsive to environmental cues [20]. Actually, several risk factors for disease such as age, unhealthy diet or exposure to chemical agents play a decisive role in the methylation status of the genome [21]. The FHL2 gene contains a number of methylation-prone CpG sites that have repeatedly been shown to become methylated with age and which are involved in the regulation of FHL2 expression.
These methylated FHL2 CpG sites have also been shown to be quite consistently present in different tissues, while demonstrating significant correlations with aging [22][23][24]. These recent findings suggest a potentially pivotal role for methylation in regulating FHL2 expression and function in age-related disorders.

2. Methylation of the FHL2 Gene

DNA methylation is the best-known epigenetic modification of the genome, altering DNA accessibility and thereby regulating gene expression. It occurs when a methyl group is added enzymatically to a cytosine, usually forming part of a CG dinucleotide (CpG). Genomic regions where CpG dinucleotides or sites cluster are called CpG islands. They are usually located in the proximity of a promoter region. However, methylation of CpG sites can also occur in other areas such as exons, introns or intergenic regions [25]. Patterns of DNA methylation are constantly changing from early stages of development through physiological processes and pathological conditions, strongly influenced by the environment [21]. Actually, several environmental factors such as age, diet, physical activity, microbiota or exposure to chemical and physical agents play a major role in disease progression through the DNA methylation changes they produce in the genome [21][26]. In the next sections, we will summarize the current literature on DNA methylation of FHL2 and its relevance in aging and age-related diseases, including obesity and type 2 diabetes.

2.1. Hyper-Methylation of FHL2 in Aging

There is an “epigenetic clock”, which consists of specific methylation changes located in particular loci of the human genome that can be found across multiple tissues, which individuals of the same age have in common [27]. Age-prediction is particularly useful in forensic science, where determination of the age of an individual in limited amounts of DNA is key. In a fascinating turn of events, a person’s age can be assessed by determining the extent of methylation of specific CpG sites in the genome. In 2013, Hannum et al. developed a mathematical model for age prediction based on methylation of 71 CpG sites in different genes, and since then efforts have been made to simplify and refine this biological age prediction tool [28]. One of the hyper-methylated loci most consistently found upon aging is located in the FHL2 gene, together with loci in Elongation of Very Long Chain Fatty Acids Protein 2 (ELOVL2), Kruppel-like factor 14 (KLF14) and Proenkephalin (PENK) [29][30][31][32]. More specifically, there is a region of clustered CpG sites (a CpG island) located proximal to the first exon of the FHL2 gene (Figure 2). The majority of FHL2 CpG sites found hyper-methylated with aging in multiple tissues are localized in this region of chromosome 2. The relevant CpG sites for FHL2 that have been described in more detail are summarized in Table 1 and Figure 2. 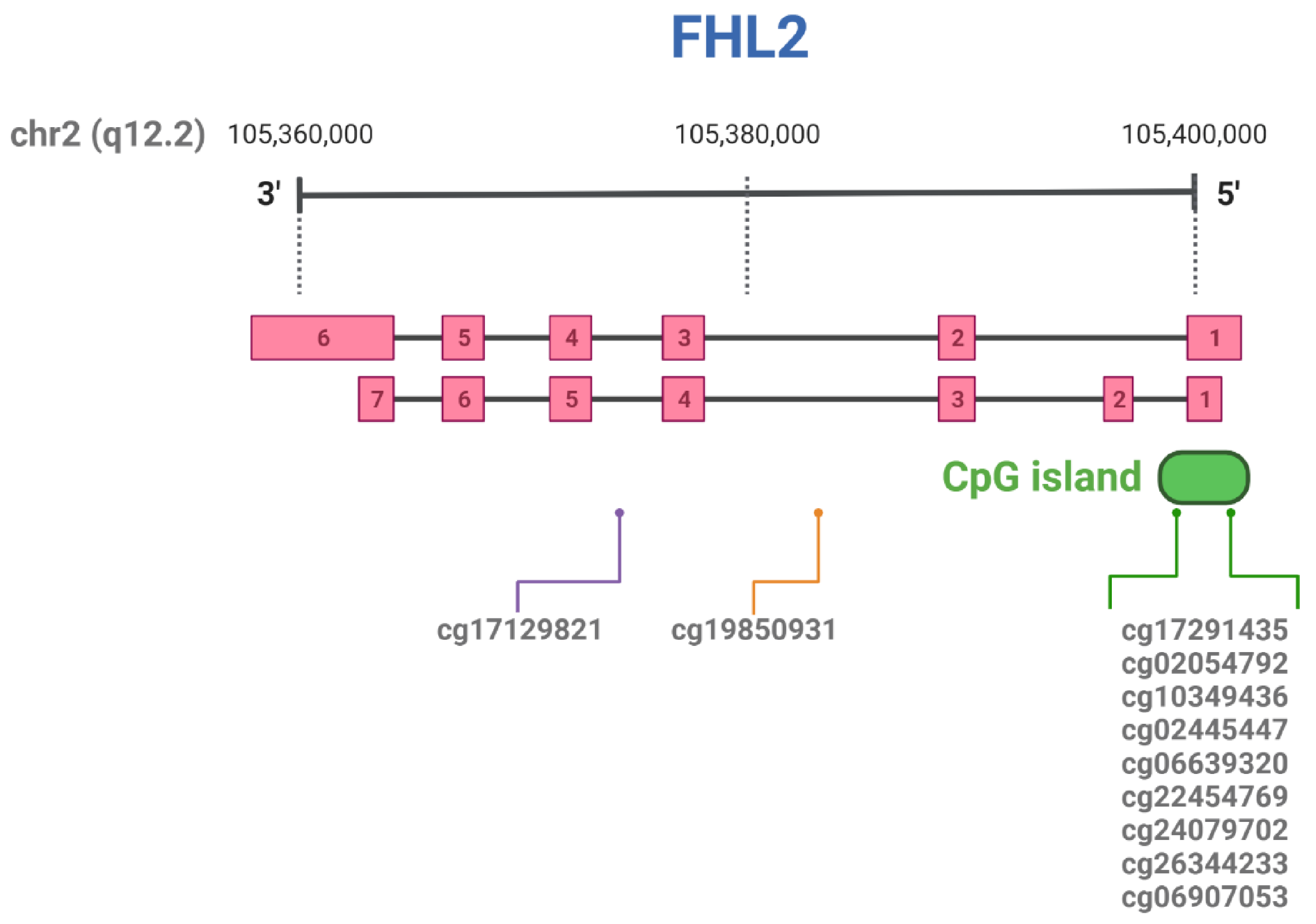 Figure 2. Schematic representation of FHL2 transcript variants (exons are sequentially numbered) and relevant CpG sites, according to Genome Browser (GRCh38/hg38 and GRCh37/hg19). Created with BioRender.com.
Table 1. Table of CpG sites in the FHL2 gene found in the literature. Position in chromosome based on genome version a GRCh37/hg19 or b GRCh38/hg38.

2.2. Hyper-Methylation of FHL2 in Metabolism

BMI, Hba1c (a marker for diabetes), and epigenetic changes have been evaluated in human white adipose tissue and compared to the methylome in blood from the same individuals. Four CpG sites of FHL2 were found to be associated with age in both blood and subcutaneous white adipose tissue in a male cohort; this concerns cg06907053, cg26344233 and cg10349436, located within the CpG island, and cg19850931, located in an intronic region. An additional site (cg22454769) was found hyper-methylated in the female validation cohort only [29]. It is important to stress again that hyper-methylation of the FHL2 gene correlates with increased FHL2 expression, which is rather uncommon as, in general, hyper-methylation of genes causes gene-silencing. In white adipose tissue, FHL2 expression increases with methylation, as already mentioned above, which was also observed in blood and pancreatic islets of healthy and type 2 diabetic subjects [34]. More specifically, in the latter study hyper-methylation of cg06639320 and cg22454769 CpG sites was shown to correlate positively with age and FHL2 expression. The same group studied methylation in the liver and compared this to blood methylomes of individual donors. This resulted in a list of 16 CpG sites, in which FHL2 was not included. Yet, eight different CpG sites in FHL2 were found significantly more methylated in the aged liver; the aforementioned cg06639320, cg22454769 and cg24079702, as well as cg06907053, one of the sites also found in white adipose tissue, and four additional CpG sites: cg02054792, cg02445447, cg17291435, cg17129821 [33].
Taken together, and considering the increasing number of studies based on the epigenetic clock, we can conclude unequivocally that methylation of the FHL2 gene is associated with aging and is an important marker in age-related prediction tools. Furthermore, there is the highly interesting situation that hyper-methylation of CpG sites in the promoter region of FHL2 seems to provoke increased gene expression. Even though in many cases DNA methylation of a promoter region inhibits the binding of transcription factors, thus silencing gene expression, this turns out to be less of a universal mechanism than previously thought. Advances in sequencing techniques have indeed uncovered that a large proportion of hyper-methylated regions correlate positively with gene expression [26][45]. Most likely, though still unproven, methylation of the FHL2 promoter region interferes with binding of inhibitory DNA-binding factors, thereby facilitating gene expression.

An impressive number of studies have been performed to unravel the function of the protein–protein interactor FHL2 in several pathologies, ranging from cardiac dysfunction and vascular disease to cancer and obesity. In addition, as documented here, epigenetic and, to a lesser extent, genetic variation in FHL2 correlates with specific diseases and traits. FHL2-deficient mice have been instrumental in assessing the functional involvement of FHL2 in these (patho)physiological processes.
Taking the data on (epi)genetic modification and function of FHL2 together, it is indisputable that hyper-methylation at specific CpG sites in the promoter region of the FHL2 gene is associated with human aging. Unexpectedly, increased methylation of FHL2 coincides with enhanced expression of this protein. So far, no data are available on whether, in addition to this epigenetic regulation of FHL2 gene expression, genetic variation also modifies FHL2 splicing and/or expression. Furthermore, we conclude that, in mice, FHL2 has a beneficial function in cardiac hypertrophy, skin and intestinal wound healing, corneal angiogenesis and cholestatic injury of the liver. This comes at a price, however, as high FHL2 expression worsens the outcome of atherosclerosis and acute myeloid leukemia, as well as obesity and white adipose tissue function. Especially for atherosclerosis, cancer and obesity, aging is a well-known and severe risk factor. While the function of FHL2 is multi-faceted and ambiguous, these data collectively point towards a central and perhaps even fundamental role for FHL2 in the complex mechanism of aging and in its associated illnesses. In conclusion, detailed knowledge of the human methylome may lead to a better understanding of age-related molecular pathways that predispose individuals to obesity and its comorbidities. To assess whether FHL2 is indeed actively involved in aging, we need to unravel its manner of action in this complicated process in greater detail using dedicated mouse models, human databases and primary cell lines.