Genetics is the basis of many neoplasms, including conjunctival melanoma (CM). Here, we analyzed five proteins associated with CM, namely BRAF, NRAS, c-KIT, NF1, and PTEN and investigated structures of BRAF, NRAS, c-KIT, and PTEN generated with AlphaFold, and NF1 structure from the Protein Databank (PDB). The Predictor of Natural Disordered Protein Regions (PONDR®), the web server for the prediction of intrinsically unstructured regions of proteins (IUPred), and the mean disorder profile (MDP) were utilized to analyze each protein for intrinsically disordered protein regions (IDPRs). AlphaFold and PDB structures show the presence of IDPRs in all five proteins. The bioinformatics analysis confirmed high levels of disorder in these proteins, with most disordered being BRAF (45.95%), followed by PTEN (31.76%), NF1 (22.19%), c-KIT (21.82%), and NRAS (14.81%). Our STRING analysis found that each of these five proteins had more predicted interactions then expected (p-value < 1.0 × 10−16). Our analysis demonstrates that the mutations linked to CM likely affected IDPRs and possibly altered their highly complex PPIs. Quantifying IDPRs in BRAF, NRAS, c-KIT, NF1, and PTEN and understanding these protein regions are important processes as IDPRs can be possible drug targets for novel targeted therapies for treating CM.

Specific mutations in BRAF, NRAS, c-KIT, NF1, and PTEN associated with CM (Table 1) [1] are possible sources of aberrant PPI, which likely occur because of changes to structural properties. There are parts of all five proteins that show typical globular structure (Figure 1) possessing α-helices and β-pleated sheets as seen in NF1's protein databank (PDB) structure sourced from the Universal Protein Resource [2]. In addition to these highly structured domains, there is evidence of disordered segments that show a lack of inherent structure. These spaghetti-like entities are clearly observed in the AlphaFold2-generated [3] structures of BRAF, NRAS, c-KIT, and PTEN (Figure 1). These regions of missing electron density correspond to IDPRs, which are segments that show high conformational flexibility and low propensity for structure and yet retain high levels of functionality.

Table 1. Genes with mutations known to be associated with the development of conjunctival melanoma.

*; exact mutation has not been noted in the literature. UniProt; Universal Protein Resource. PBD; Protein Databank 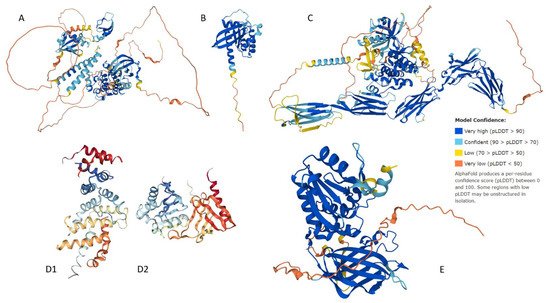 Figure 1. Universal Protein Resource (UniProt) structural output for human (A) BRAF, (B) NRAS, (C) c-KIT, (D1,D2) NF1, and (E) PTEN. Structures for BRAF, NRAS, c-KIT, and PTEN were generated by AlphaFold2, whereas structure of human NF1 is presented by X-ray crystal structures of its two domains from the protein data bank. Confidence of models generated by AlphaFold2 is color coded (see legend in the figure).

Our disorder-based computational analysis was aimed at quantifying the intrinsically disordered protein region (IDPR) identified in the structural assessment of each gene product. To begin, the IUPred2 (Short (S)) and IUPred2 (Long (L)) [4], PONDR® VLXT [5], PONDR® VL3 [5], PONDR® VLS2 [6], and PONDR® FIT analysis [7] (Figure 2) allowed for the visualization and confirmation of IDPRs within BRAF, NRAS, c-KIT, NF1, and PTEN. Furthermore, we quantified these IDPRs for each protein (Table 2). Based on the PONDR® VSL2 outputs, BRAF had the highest levels of structural disorder BRAF (45.95%), followed by PTEN (31.76%), NF1 (22.19%), c-KIT (21.82%), and NRAS (14.81%). Therefore, using the established criteria for the classification of proteins based on their PPIDR scores where proteins are considered as highly ordered (PPDR < 10%), moderately disordered (10% ≤ PPDR < 30%), and highly disordered (PPDR ≥ 30%) [8], it was determined that NRAS, c-KIT, and NF1 belong to the category of moderately disordered proteins, whereas PTEN and BRAF are highly disordered. 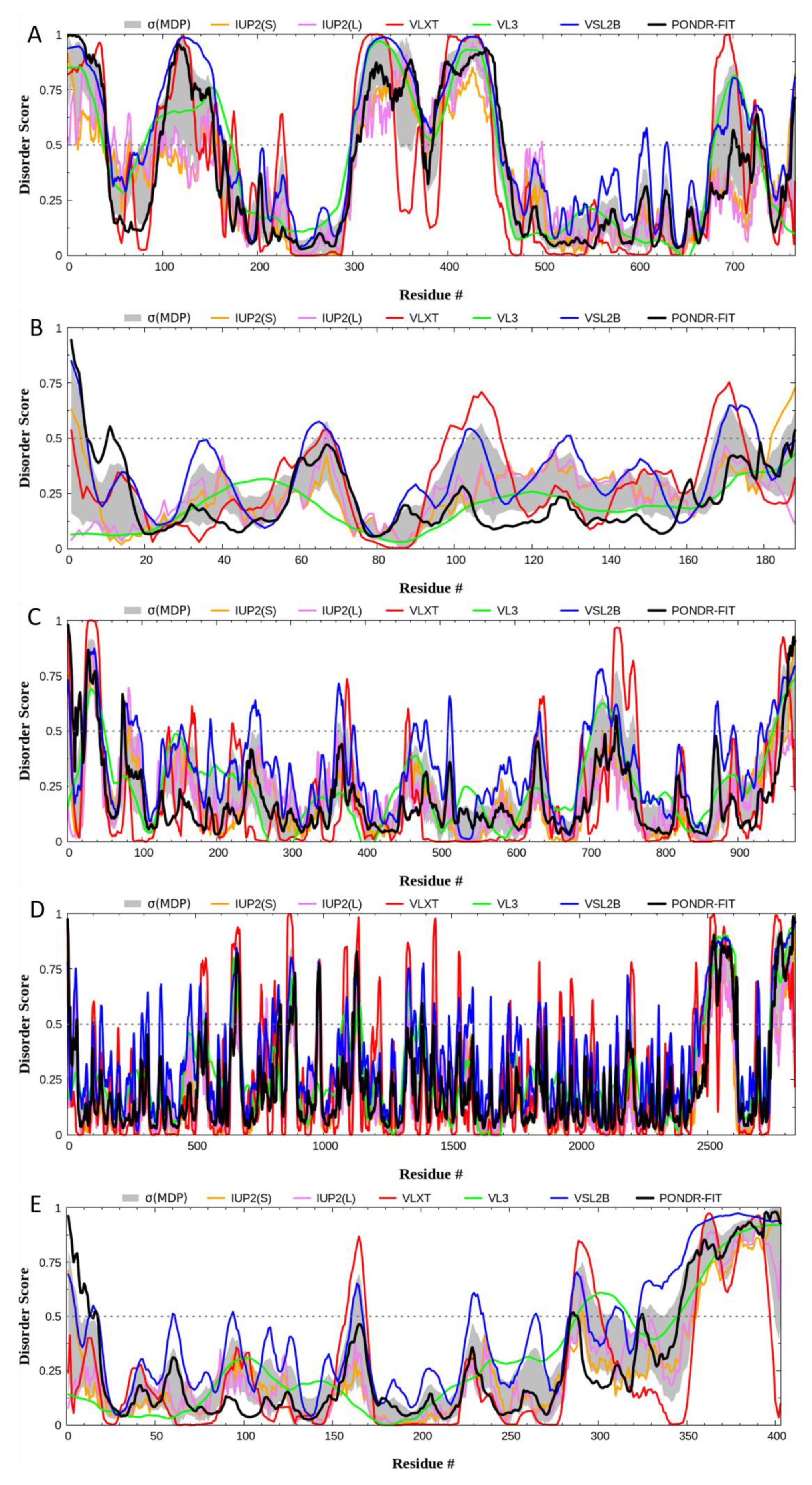 The next step in our investigation was focused on determining the significance of these structural findings. The presence IDPRs promotes conformational flexibility in each protein; therefore, these proteins likely do act as promiscuous binders and might have interaction partners outside of their well-defined roles in the MAPK and PI3K pathways. Our STRING analysis (Figure 3) demonstrated that each of the proteins that we analyzed has the capability of binding with many different partners. In fact, the number of interactors in the protein-protein interaction (PPI) network of BRAF, NRAS, c-KIT, NF1, and PTEN ranges from 60 to 327 (Table 3). The predicted number of interactions in the PPI network is highest for NRAS (7795), followed by PTEN (2297), BRAF (2213), NF1 (1790), and c-KIT (495). All of these values are significant (p-value < 10–16) as they vary greatly from their expected number of interactions. 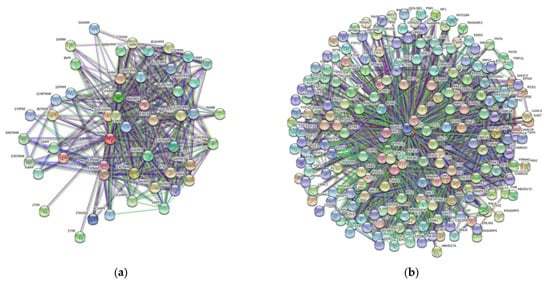 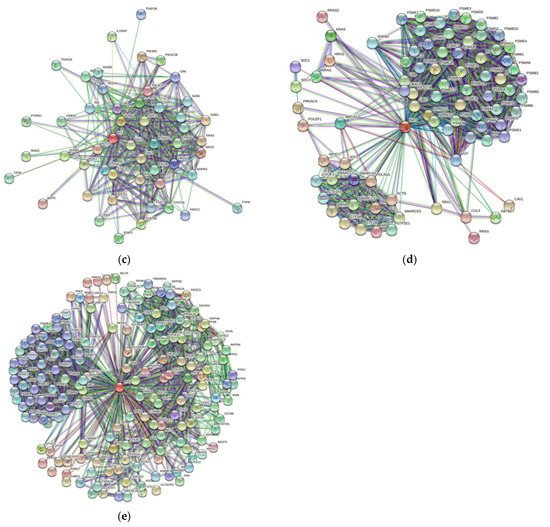 Figure 3. Search Tool for the Retrieval of Interacting Genes (STRING) output for (a) BRAF, (b) NRAS, (c) c-KIT, (d) NF1, and (e) PTEN. This analysis shows multiple proteins (circles) and their extensive interaction network (lines) for the five proteins involved in the pathogenesis of conjunctival melanoma. This demonstrates very complex protein binding ability beyond the MAPK and PI3-akt pathways. The ability of these proteins to interact in an extensive interaction network is possible through intrinsically disordered protein regions.
Table 3. Search Tool for the Retrieval of Interacting Genes (STRING) analysis with mutations known to be associated with the development of conjunctival melanoma.
p-value; PPI enrichment p-value determined by difference between expected and predicted number of interactions.
We also used STRING to investigate the intra-set interactions of human BRAF, NRAS, c-KIT, NF1, and PTEN. The analysis revealed that these proteins are heavily linked by binary protein-protein interactions. The intra-set networks of all five proteins were connected by 14 protein-protein interactions. Since the expected number of interactions among proteins in a similar size set of proteins randomly selected from human proteome is equal to two, this internal PPI network of human CM-related proteins has significantly more interactions than expected, being characterized by a PPI enrichment p-value of 1.4 × 10−9.

BRAF, NRAS, c-KIT, NF1, and PTEN have specific mutations (Table 1) that are associated with CM, and each mutation likely alters the functionality of these proteins. Our structural analysis confirmed the presence of intrinsically disordered protein regions (IDPRs) in all these key proteins (BRAF (45.95%) > PTEN (31.76%) > NF1 (22.19%) > c-KIT (21.82%) > NRAS (14.81%)). Furthermore, STRING analysis demonstrated highly complex protein-protein interaction (PPI) networks as every network had many predicted interactions beyond their expected binding behavior (p-value < 1.0 × 10−16). These findings suggest that mutations associated with these proteins likely have an impact on protein interactions, are secondary to abhorrent regulation of IDPRs, and possibly promote oncogenesis and neoplastic development. This is consistent with findings that mutations can affect IDPRs and promote oncogenesis [9].
To our knowledge, this is the first study to analyze the mutations associated with the pathogenesis of CM, namely for their IDPRs and the PPI network of each of these proteins. In recent years, there has been a push to target intrinsically disordered protein regions involved in various cancers including adenocarcinoma, Ewing’s sarcoma, and lymphoma [9][10][11]. While targeting IDPRs is challenging as they are highly dynamic and have poorly defined structures, intrinsically disordered protein (IDP) drug discovery campaigns [12] are addressing these limitations. In pancreatic ductal adenocarcinoma, an IDP, nuclear protein 1 (NUPR1), has been successfully targeted in vivo to completely arrest development of the cancer in mice [13]. These advances in IDP-based drug discovery methods may provide a viable target for future campaigns targeting molecular features of CM, which include the high level of IDPRs in BRAF, NRAS, c-KIT, NF1, and PTEN. Hopefully, the extensive intrinsic disorder will improve the chances of success, potentially yielding novel therapeutics to treat CM.
There are already several different drugs that are available for the extraocular melanomas, such as BRAF inhibitors and c-KIT inhibitors, and it is possible repurpose them to treat CM [14][15][16]. These therapies are helping the management of melanomas, but they do not always induce remission. Therefore, other targets, such as IDPRs in BRAF, NRAS, c-KIT, NF1, and PTEN, could be considered. There are likely compounds that are commercially available that may be able to target the highly dynamic IDPRs of any of our five proteins of interest.
Our analysis found high levels of IDPR’s in BRAF, NRAS, c-KIT, NF1, and PTEN and demonstrates the presence of highly complex PPIs, which may be possible future therapeutic targets. The presence of IDPRs is important as the solution space for potential drug targets is likely significantly larger than previously thought. CM’s mutational profile will likely consist of one or more the of these mutations. If more than one mutation is present, combination-based medical therapy may be warranted in order to target the neoplasm at multiple points in its protein interaction network.
As with all studies, this study had limitations. The databases and tools utilized in this analysis do not provide a comprehensive nor exhaustive representation of the proteomics involved in CM. As with all bioinformatics investigations, translations to basic science and clinical outcomes are needed. The tools used herein revealed the molecular features of five key proteins related to CM.
To our knowledge, this is the first study to identify IDPRs in five important proteins that have been linked to the pathogenesis of CM. There is evidence to suggest that targeting IDPRs play a role in cancer treatments [10] and the finding in this study suggest a possible avenue for studying new treatment targets for CM. These findings are critical for advancing the management of this potentially lethal neoplasm as it may allow for the development of new therapeutics that target these structural properties. If such targeting comes to fruition, perhaps other tumors with these proteins and IDPRs could possibly be therapeutically targeted. Further research will be needed in order to translate these genomic and proteomic based discoveries into tangible improvements of patient outcomes.