Until now, no evidence about the true mechanism of the atherosclerosis process in autoimmune rheumatic diseases (AIRDs) is known [1]. Current research findings are often contradictory. Whether traditional risk factor like age, gender, smoking, or hypertension contribute solely to the atherosclerosis, or whether it is a consequence of a nontraditional states like chronic inflammation or changes in cytokines, antibodies that accompany atherosclerosis, or a combination of both aspects is not yet clear and is debated [1]. Moreover, it is currently not known which factors play a major role in process of development of premature atherosclerosis in autoimmune rheumatic disease patients.

Cardiovascular diseases are considered as one of the most common causes of morbidity and mortality in autoimmune rheumatic diseases [3]. Recent studies, however, show contradictory results, and there is currently a debate about the role of traditional and nontraditional risks in the development of atherosclerosis processes, which, in turn, are believed to play important role in the development of cardiovascular diseases in autoimmune rheumatic diseases [4][5]. Traditional risk factors include age, gender, smoking, obesity, dyslipidemia, hypertension, diabetes, and a sedentary lifestyle [4][6]. Interestingly, there is some controversy about body weight in relation to disease activity, especially in rheumatoid arthritis. Some studies named it “inflammatory cachexia” [7], in active inflammation, the liberation of inflammatory mediators, such as TNFa, IL6, IL1, and others that affect the body metabolism, leads to a state of hypercatabolism. This hypercatabolism is in addition to the anorexia associated with acute inflammation in these patients, thus leading to decreases in body weight (mostly in muscle mass) rather than obesity [8][9]. However, most studies show an increased prevalence of obesity in RA patients [10][11][12]. Other studies reported that even though obesity is a contributing risk factor in development of atherosclerosis process, obesity has an otherwise good prognostic and protective effect in cardiovascular mortality in comparison to that of low body weight in rheumatoid patients. For instance, a BMI more than 30 was reported to have a better prognostic outcome as compared to that of a BMI of less than 20 [13].
Similarly, “Lipid paradox” was also reported in patients with autoimmune rheumatic diseases. “Lipid Paradox” is a term applied for lipid profile in AIRDs, and perhaps even in all inflammatory conditions, where, during the active inflammatory state, there is a decrease in all lipid profiles: total cholesterol, LDL, and HDL cholesterol (that is, there is a state of hypercatabolism). However, once the active inflammatory subsides (spontaneously or with drugs), there is a state of normal or increased serum cholesterol levels [14].
Smoking is a well-known independent risk factor for atherosclerosis [15]. In addition, most studies show that it increases the risk of cardiovascular diseases in RA patients [16], especially if smoking is accompanied by the presence of rheumatoid factor (RF) and/or anticitrullinated peptide antibody (ACPA) [17]. Hyperhomocysteinemia, known as a traditional risk factor in cardiovascular diseases [18], is also present in AIRDs. It is considered one of the independent risk factors in the severity of the autoimmune diseases [19]. Although there is debate about obesity and cachexia in AIRDs, all studies suggest that metabolic syndrome is associated with disease severity and increased atherosclerosis risk in autoimmune diseases [14][20]. Hyperuricemia is considered a risk factor in cardiovascular diseases, and also in AIRDs [21]. Finally, insulin resistance was also suggested to play a role in autoimmune rheumatic diseases [14].

Nontraditional risk factors for atherosclerosis refer to those risk factors that are not related to the usual Framingham cardiovascular risk factors, such as age, gender, etc., and are specific to certain diseases. These classically include cells, cytokines, chemokines, antibodies, and drugs (see Figure 1). Endothelial cells have a major role in the state of endothelial dysfunction. During inflammation, there is a release of many cytokines, which influence the action of nitric oxide and lead to vasoconstriction, as well as increase the risk of thrombosis and atheroma formation [22]. Also, the cells of the immune system especially T lymphocytes and B lymphocytes are implicated in this process. For instance, T cells are involved in the processes of atherosclerosis, and are a major contributor to AIRDs [23]. T helper cells, whether T helper 1 [24] or T helper 17 (Th17) cells, have a stimulatory effect on atherosclerosis formation [25]. On the other hand, regulatory T cells (Treg) have a protective function on the atherosclerosis process [26]. Unsurprisingly, the ratio of helper Th17 cells to regulator T reg cells is important in atherosclerosis formation and in controlling the disease during therapeutical interventions (e.g., with medications) [24]. With regards to immune mediators, TNFa is one of the most important mediators in autoimmune atherosclerosis and autoimmune diseases. TNFa is secreted from macrophages, endothelial cells, and T lymphocytes. As TNFa initiates or potentiates acute inflammatory states, anti-TNFa could play a major role in the control of the inflammatory conditions and disease control [27]. IL6 is also considered an important cytokine in inflammatory conditions. IL6 is found in RA patients with premature atherosclerosis [28]. Furthermore, IL1 was reported to have a role in the development of atherosclerosis in AIRDs [29]. 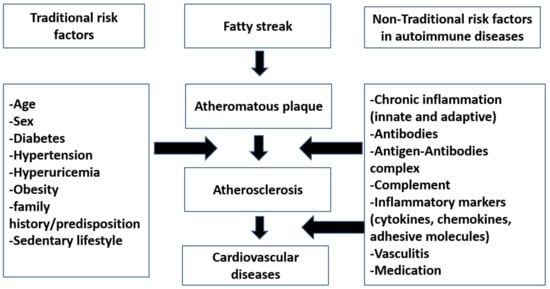 Figure 1. An overview of roles of traditional versus nontraditional risk factors in atherosclerosis in autoimmune diseases.
Antibodies are basic contributors in the pathogenesis of autoimmune diseases. Many antibodies were reported to be implicated in the development of autoimmune rheumatic diseases and autoimmune atherosclerosis [30]. Rheumatoid factor (RF) is an antibody associated with rheumatoid arthritis, and its levels correlate with arthritis activity and prognosis; its presence is also associated with increase in cardiovascular risk [31][32]. Also, anticitrullinated protein antibody (ACPA) is associated with aggressive rheumatoid diseases; their presence is associated with worsening of the prognosis in RA and greater cardiovascular manifestations [33]. Antinuclear antibodies (ANA) are secreted in many AIRDs, and their levels are also related to diseases activity and formation of atherosclerotic plaques [34]. Anti-DNA antibody, which is specific to systemic lupus patients, also relates to disease activity [35]. Anti-LDL antibodies are antibodies formed against oxidized LDL, and its presence in the blood of the patients indicates an increased incidence of vascular dysfunction and cardiovascular deconditioning [36]. However, other studies indicate that antioxidized LDL confers protection against cardiovascular risk [37][38]. Interestingly, studies on the effect of anti-LDL antibodies showed that IgM is protective against atherosclerosis, while IgG has harmful effects [36]. The presence of antiphospholipid antibodies (e.g., in antiphospholipid antibody syndrome or its presence as secondary antiphospholipid in other connective tissue diseases) indicates a major risk for development of vascular thrombosis and cardiovascular diseases [39]. Cryoglobulin, immunoglobulins that precipitate in vitro at lower temperatures, was shown to be associated with many autoimmune diseases, especially Sjögren’s syndrome, systemic lupus, and hepatitis C viral infection [40]. Its presence in the blood does not indicate the presence of disease, but it can cause many vascular symptoms due to its precipitation and obstruction of blood vessels of multiple organs ranging from critical vascular ischemia to autoimmune vasculitis [41], which aggravate endothelial dysfunction [42]. Although anti-Ro anti-La antibodies are associated with congenital heart block in neonatal lupus disease [43], the presence of anti-Ro antibodies in adults may be associated with complete heart block in primary Sjögren’s syndrome patients [44][45].