Gastrointestinal mucositis (GI-M) is a frequently observed side effect of chemotherapy in patients with cancer that affects the gastrointestinal microenvironment and potentially drug absorption.

Despite significant advances in the development of novel anti-cancer agents, chemotherapy remains the backbone of effective cancer control [1][2]. While highly effective, its use remains challenged by adverse complications, particularly when used in high doses [3][4]. High-dose chemotherapy is most frequently used to treat hematological malignancies, compromising the host’s immune cells prior to receiving a hematopoietic stem cell transplant (HSCT) [5][6]. Due to the severity of immunosuppression induced by this treatment, bloodstream infection is a common and potentially lethal complication. Approximately 20% of patients with hematopoietic malignancies for whom high dose chemotherapy is routinely used prior to HSCT develop bacteremia either as a result of exogenous contamination or the expansion and subsequent translocation of enteric pathogens across a compromised intestinal barrier [5][6][7][8]. In order to overcome these risks, anti-infective agents, including antibiotics, antivirals, and antifungals, are routinely used to control infection risk in vulnerable patient cohorts [9].
The efficacy of anti-infective agents relies on optimal intestinal function including absorption, transport, and metabolism [10]. However, due to the non-selective nature of chemotherapeutic compounds, healthy cells from the intestinal epithelium are targeted resulting in irreversible DNA damage and apoptotic cell death [11]. Consequently, the destruction of intestinal villi and the inability to rapidly repair the epithelial barrier during chemotherapy results in gastrointestinal mucositis (GI-M) [11][12][13]. GI-M is characterized by inflammation of the intestinal mucosa lining the gastrointestinal (GI) tract that leads to structural, functional, and immunological changes in the GI microenvironment [13]. Chemotherapeutic agents, commonly responsible for GI-M, are alkylating agents (busulfan, cyclophosphamide, cisplatin, melphalan), antimetabolites (5-fluouracil, methotrexate), topoisomerase I inhibitors (irinotecan), among others [14][15]. The exact mechanism of action of these agents and their corresponding impact on intestinal permeability are listed in Table 1. As these agents are often given in combination (e.g., FEC and FOLFOX), their toxicity is usually increased, which may worsen GI-M symptoms. Clinically, GI-M presents as ulcerative lesions, with associated abdominal pain, anorexia, and malnutrition [16]. In severe cases, GI-M can negatively impact anti-cancer therapy as often chemotherapy regimens have to be interrupted, which affects the treatment efficacy [7][17]. Although the incidence depends on the type of therapy and its dose, it has been estimated that close to 100% of people undergoing high-dose chemotherapy will experience GI-M [16][18][19][20].
Table 1. Most common anti-cancer agents used during chemotherapy and impact on the gastrointestinal tract.
* ↑Increased; # ↓decrease.
GI-M pathobiology is currently proposed to involve five dynamic and overlapping phases [7][19][41][42][43]. Briefly, in the initiation phase, the penetration of chemotherapeutic agents from the submucosal blood supply induces direct DNA damage to the basal-epithelial cells, causing cellular stress and apoptosis. Consequently, the injured cells activate a variety of stress mechanisms which leads to the generation of reactive oxygen species as well as the release of pro-inflammatory cytokines. In the upregulation phase, these molecules act as highly effective secondary messengers and activate stress mechanisms in several mucosal-associated cells such as endothelial cells and macrophages. In turn, these cells respond by releasing a storm of pro-inflammatory cytokines, such as tumor-necrosis factor-α (TNF-α) and interleukin 1β (IL-1β), exacerbating tissue injury. During the third phase (signal amplification), the signaling mechanisms participate in a positive feedback loop whereby the original damage signals are amplified, thereby triggering the loss of self-renewal capabilities of epithelial stem cells and intensifying the state of inflammation. As a result, progression to the fourth stage (ulceration) commences whereby the integrity of epithelium is severely compromised, and frank ulceration occurs. It is in this stage that the symptoms and secondary complications of GI-M, including bacteremia, arise. Lastly, upon halting the chemotherapeutic intervention in the fifth stage, the mucosal barrier begins to spontaneously heal, inflammation subsides, and the mucosal barrier integrity begins to recover [19][41][42][43]. Ultimately, the profound epithelial damage observed during GI-M hampers one of the most important intestinal functions—the absorption of nutrients, and potentially drugs, across the GI tract.
The rate and degree of absorption of an orally administrated drug depend on several factors, including molecular size, solubility, degree of lipophilicity, and stability of the drug [10]. Together, these factors can have a great impact on the drug bioavailability and its transport across the absorptive epithelia [10]. Additionally, factors such as intestinal surface area, pH, blood flow, and intestinal motility can equally affect the absorption of a drug [44][45][46]. During chemotherapy, changes in the gastrointestinal microenvironment resulting from GI-M may therefore impact the key structures and functions required for drug absorption at multiple levels, thus resulting in alterations in systemic drug loads and efficacy [47].

The GI system is highly dynamic and organized, responsible for (i) separating the internal milieu of the outside environment and, (ii) digesting and absorbing nutrients [48][49]. Similar to nutrients, many orally-administrated drugs are also absorbed and metabolized in different parts of the GI tract (e.g., small intestine) [48]. For optimal absorption of drugs during chemotherapy, several assumptions are made about the GI microenvironment: (1) the intestinal architecture supports drug absorption, (2) factors such as intestinal pH and motility remain unaltered and thereby do not affect the bioavailability, activity, and toxicity of drugs, and (3) the gut microbiota remains unperturbed [50]. These assumptions are particularly relevant during GI-M as the GI environment is severely damaged. Figure 1 shows a graphical representation of proposed pathobiological aspects of GI-M contributing to changes in drug absorption. 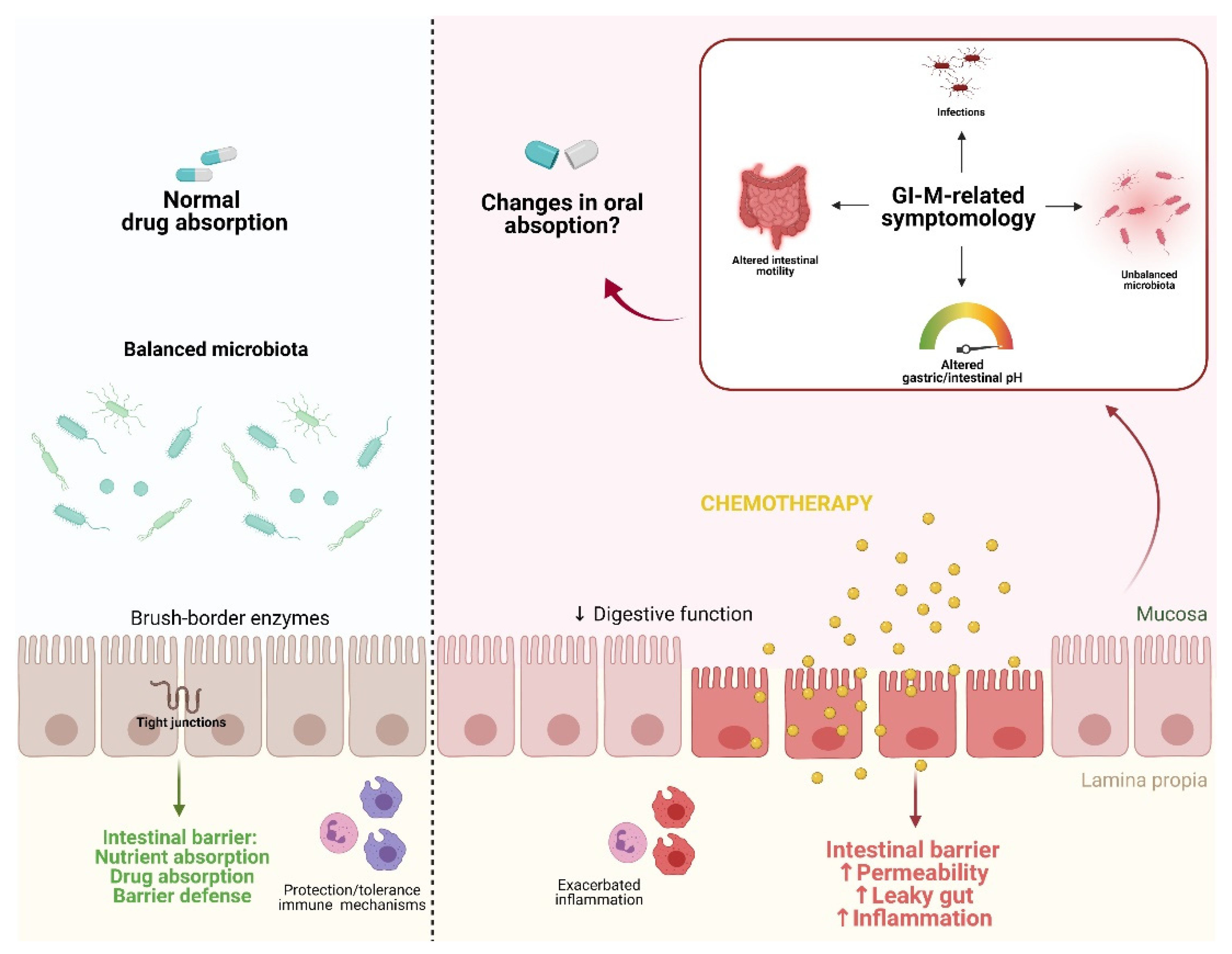 Figure 1. Proposed pathobiological aspects of GI-M contributing to changes in drug absorption. In a state of homeostasis, the combination of a balanced microbiota, tight junction formation, and balanced immune protection/tolerance mechanisms contribute to an optimal physiological function of the intestinal barrier, resulting in normal nutrient and drug absorption. The gastrointestinal microenvironment can be disturbed by external insults such as chemotherapy, leading to increased inflammation and consequently barrier disruption. This ultimately results in the disruption of the gut microbiota, alterations in gastric/intestinal pH, alterations of intestinal motility, and bacterial translocation. Together, these altered physiological/morphological functions potentially impair drug absorption. Figure created with Biorender.com.

3. The Effects of Gastrointestinal Mucositis on Drug Absorption

As previously discussed, several GI-M-related factors can potentially influence drug absorption [51][52][53][54][55]. However, the study of the impact of GI-M on drug absorption still remains a challenge, with only a few studies focused on a limited number of antimicrobial agents. In a cohort of 250 patients with haematological malignancies, of which 56 developed GI-M, Kovanda et al. (2017) concluded that mucositis had no influence on the bioavailability of isavuconazole (98.3% vs. 99.8%, non-mucositis vs. mucositis) [55]. The bioavailability of ciprofloxacin was previously studied, with different outcomes being reported. Gattis et al. (1997) observed no differences in exposure (at least not within 24 h after administration) between chemotherapy-induced grade I and II GI-M patients and healthy volunteers. In contrast, Johnson et al. (1990) showed an overall reduction in plasma ciprofloxacin concentrations (3.7 mg/L at 2–3 days post administration vs. 2 mg/L, 13 days after administration) in six patients diagnosed with GI-M [55][56]. Vanstraelen et al. (2016) investigated the pharmacokinetics of posaconazole dosing regimen in HSCT patients undergoing myeloablative or nonmyeloablative conditioning and found no clear correlation between plasma citrulline and plasma posaconazole [57].
Although insightful, these studies present several limitations, including their design and small sample size. As such, it becomes necessary to first perform high-quality studies in patients to better investigate and characterize the exposure of different orally administrated antimicrobial drugs. It is clearly not possible to predict the pattern of drug (mal)absorption for all drugs administrated to people undergoing intensive cancer therapy [46]. This demonstrates the need to develop models able to assess all physiological factors that contribute to drug absorption. A very insightful ex vivo model, increasingly used in several fields, is the Ussing chamber [58]. This new technique can be used to study bidirectional transepithelial drug transport in combination with intestinal metabolism. Moreover, the ability of the Ussing chamber to measure permeability quantitively makes it a useful tool to investigate how alterations in the intestinal architecture can impact drug availability [58]. Other in vitro systems such as gut-on-a-chip have been increasingly recognized for their controlled biochemical microenvironment thus supporting drug pharmacokinetic research [59].
More recently, a new mathematical modeling technique for predicting absorption, distribution, metabolism, and excretion of drugs has been developed. This is known as physiologically-based pharmacokinetics (PBPK) modeling [58]. This technique provides not only mechanistic insight into the physiologic and anatomic features of a drug, but also incorporates physiological variables of the host that may interfere with the efficacy of the drug [58]. The use of this modeling technique has been recently recommended by Pilmis et al. (2020) as they suggest that integration of PBPK modeling would be essential to interpret the impact of an orally administrated antibiotic on the different sites of the intestine and also on the gut microbiota [60]. The authors explain that along the GI tract, antibiotics are absorbed in a different manner, which suggests that if a drug is almost entirely absorbed in the small intestine, only a small portion will reach the distal digestive tract, resulting in a potentially high risk of infection [60]. Importantly, when combined with emerging epithelial modeling tools such as gut-on-a-chip, PBPK modeling can provide crucial information on drug absorption in the intestine [61].
These drug-absorption prediction techniques have not been yet applied in the study of the impact of GI-M in drug absorption. Therefore, before such techniques should be applied in the field, an effort should be made to design clinical longitudinal studies in people with varying degrees of GI-M to understand the dynamics of drug bioavailability during this common complication of cancer therapy. This will ultimately allow the delivery of a more personalized antimicrobial treatment to people with cancer, resulting in better infection control. It could even be argued that in the context of severe mucosal breakdown during GI-M, the transport of orally administered drugs into systemic circulation may in fact be increased. As such, restricted dosing of some antibiotics could be adopted in concerted stewardship initiatives to decrease rates of resistance.