Mesenchymal stem cells (MSCs) are multipotent adult stem cells present in virtually all tissues; they have a potent self-renewal capacity and can differentiate into multiple cell types. They also affect the ambient tissue by the paracrine secretion of numerous factors in vivo, including the induction of other stem cells’ differentiation. In vitro, the culture media supernatant is named secretome and contains soluble molecules and extracellular vesicles that retain potent biological function in tissue regeneration.

1. Mesenchymal Stem Cells Can Be Isolated from Different Adult Tissues

Mesenchymal stem cells (MSCs) were described by Friedenstein in 1970 [1] and were first isolated from the bone marrow as non-hematopoietic stem cells. In 1991, Caplan introduced the term “mesenchymal stem cells” because it was believed that these cells would differentiate into mesodermal (middle germ layer) cells, such as bone, cartilage, tendon, fat, skin, muscle, and marrow stromal cells [2][3][4]. However, today we know that MSCs can also differentiate into ectodermal [5] and endodermal [6] cell lines, characterizing them as pluripotent stem cells [7][8]. They are adherent spindle-shaped cells found in virtually all adult tissues as a population of undifferentiated tissue-resident cells that facilitate tissue remodeling and repair during life [9]. MSCs generate progeny by self-renewal and can differentiate into various cell types depending on the particular tissue. However, in many organs, their pluripotency decreases with age, leading to reduced regenerative potential.

Although several trials are being conducted using MSCs to regenerate multiple tissues and organs, much remains to be elucidated about their biology and regenerative capacity. In general, MSCs are perivascular cells [10][11] that can be expanded for long periods in culture and, as observed in vivo, extended maintenance in vitro may reduce their pluripotency, limiting their applicability. Moreover, empirical evidence demonstrating that MSCs have the capacity for asymmetric cell division is still lacking [12], a characteristic of conventional stem cells [13]. Additionally, by definition, stem cells are rare cell populations that undergo self-renewal and yield progenitors to differentiate hierarchically into other cell types. However, MSCs appear to affect different cell types and alter the tissue microenvironment via paracrine signaling, inducing differentiation of other resident stem cells (cooperative activity), angiogenesis, chemotaxis, alteration of the local inflammatory response against pathogens and damage [14], tissue repair, proliferation, apoptosis control, and others [15][16].

Due to the lack of definitive and consensual markers, human MSCs have been minimally identified using their capacity to adhere to plastic culture surfaces, and their canonical phenotype is based on expressed markers after in vitro expansion [17]. The identification of MSCs is usually based on the combined expression of CD73, CD90, and CD105, with no expression of CD34, CD45, CD14, and HLA-DR (Figure 1A). Moreover, it is also necessary that they differentiate into three lineage cells: adipocytes, chondrocytes, and osteocytes, under inductive culture conditions [17]. So far, bone marrow-derived MSCs are the best-characterized cells with multipotent differentiation capacity. These cells have fibroblast-like morphology, adhere to plastic, and undergo extensive proliferation and clonal expansion confirmed by colony-forming unit fibroblast assay (CFU-F). MSCs can also express various additional surface markers, including CD10, CD73, CD140b, CD146, the disialoganglioside GD2, and CD271. Moreover, they may express pluripotency markers such as Oct4, Nanog, and stage-specific embryonic antigen-4 (SSEA-4) that identify different cell populations in the bone marrow [18]. 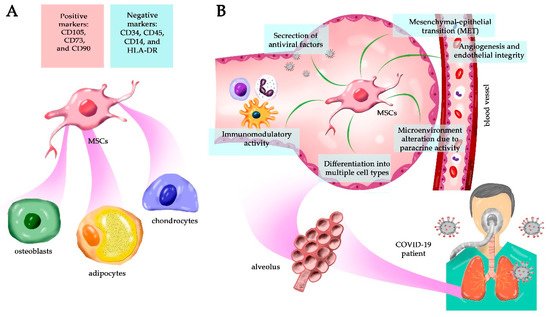 Finally, MSCs seem to be a much more heterogeneous population than initially envisioned. It is unclear, for example, whether these cells regenerate only in the tissues from which they originate, or if their heterogeneity allows the differentiation into other tissue parenchymal cell types in vivo [3][9]. Moreover, there are no ethical issues involved, in contrast to the use of embryonic stem cells in regenerative medicine, and they can be harvested in relatively large numbers, mainly from bone marrow and adipose tissue [19]. All these characteristics contribute significantly to the therapeutic use of MSCs [14].

The nomenclature “MSC” causes great confusion in the scientific literature and can also mean “mesenchymal stromal cells”. Thus, the International Society for Cellular Therapy (ISCT) suggests that the fibroblast-like plastic-adherent cells, regardless of the tissue from which they were isolated, be termed “multipotent mesenchymal stromal cells”. Then, the term mesenchymal stem cells should be used only for cells that meet specific stem cell criteria. The widely recognized acronym, MSC, may be used for both cell populations since researchers define the correct designation in their research [20]. In fact, mesenchymal stromal cells are present in the stroma of several organs and tissue and are a heterogeneous population comprising several cell types such as stem cells, progenitor cells, fibroblasts, and many others [21][22]. Thus, it is the stem cells present in this population that can differentiate into cells of the mesodermal, ectodermal, and endodermal lineage [23]. Therefore, the acronym MSC refers more appropriately to the stem cells defined by the term multipotent mesenchymal stromal cells.

2. MSC As an Alternative Treatment for COVID-19

The COVID-19 pandemic is caused by the virus SARS-CoV-2, which spread quickly and became a global health emergency. The rapid virus replication in the lungs triggers a strong inflammatory response that leads to a “cytokine storm”, causing acute respiratory distress syndrome (ARDS) and respiratory failure, the leading cause of death in severely affected patients [24]. Although the lungs are more evidently compromised, the disease affects multiple organs, and patients with a previous history of cardiac symptoms, obesity, diabetes, or coagulation disorders, for example, have a higher morbimortality risk. Then, considering COVID-19 a systemic disease, we can assume that multiple affected organs and tissues could benefit from the treatment with MSCs and/or with their secretome.
In the lungs, the inflammation is caused by the release of cytokines virally triggered, including IL-2, IL-6, IL-7, granulocyte colony-stimulating factor (GSCF), interferon-gamma-induced protein 10 (IP10), monocyte chemoattractant protein 1 (MCP1), macrophage inflammatory protein 1α (MIP1α), and TNF. These mediators and others lead to pulmonary edema, air exchange dysfunction, and acute cardiac injury, for example [25]. Currently, available therapies include non-specific antivirals, antibiotics to prevent secondary infection and sepsis, and corticosteroids to reduce inflammation. However, the success rate of this therapeutic strategy is low in patients with severely affected pulmonary function. Therefore, several drugs are being tested for repositioning, including Remdesivir and others [26]. Among cell-based alternatives, MSCs have more registered clinical trials and possibly more chances to be approved for COVID-19 treatment [27]. Moreover, they have documented safety profiles from FDA-approved clinical trials. A systematic review of several clinical trials involving over one thousand participants that received intravascular transplants of MSCs for different diseases and clinical conditions was performed in 2010. In that study, a follow-up was done varying from two weeks to thirty months and attested to the safety of MSCs therapy [28].
A clinical study of severely affected COVID-19 patients using MSCs derived from the human umbilical cord was performed. The patients were divided into the standard treatment group and the standard treatment group that received the cell infusion. After twenty-eight days, the mortality in the group that received cell infusion was 0% and in the other group was 10.34%. Moreover, the clinical condition improved from the third day after cell infusion and reached a significant difference on the seventh day. There was also a significant reduction in C-reactive protein and the level of IL-6, and the number of lymphocytes returned to the normal range significantly faster [29]. A study using MSCs from adipose tissue was also carried out in thirteen patients with COVID-19 on mechanical ventilation. There was a clinical improvement in 70% of the patients, on average sixteen days after the first application. Seven patients were extubated, and four remained intubated (two with an improvement in their ventilatory and radiological parameters and two in stable condition). Two patients died, but particularly in those patients with clinical improvement, there was a decrease in the inflammatory and coagulation parameters, C-reactive protein, IL-6, ferritin, LDH, and d-dimer, as well as an increase in lymphocytes [30]. Another study evaluated the allogeneic transplantation of menstrual blood-derived MSCs in two hospitalized patients. The first patient received MSCs transplantation through intravenous infusion three times on February 5th, 6th, and 8th of 2020. The injection dose of MSCs was set to one million cells per kg of body weight. The second patient received the same intravenous infusion three times on February 8th, 9th, and 11th of 2020. Then, the fraction of inspired O2 of the two patients gradually decreased while the oxygen saturation and partial oxygen pressure improved. Furthermore, the patients’ computed tomography (CT) scans showed that bilateral lung exudate lesions were adsorbed after MSCs infusion [31].
In a case study, a 65 year-old patient was diagnosed with COVID-19, and after twelve days of treatment, the patient’s symptoms and inflammation were still severe. Then, allogenic human umbilical cord MSCs were given three times (5 × 107 cells each time) with a three day interval, with thymosin α1 and antibiotics daily. After treatment, most laboratory indexes and CT images showed inflammation remission [32].
In another study, twenty-five patients with severe COVID-19 received a clinical grade, and MSCs were given at a dose of 1 × 106 cells per Kg. Promethazine hydrochloride (intramuscular injection, 25 mg) was used before the injection of MSCs to prevent allergies. Seven individuals received MSCs once, other seven patients received MSCs twice, and eleven individuals were infused with cells three times. After MSCs therapy, sixteen cases (64%) showed CT scan improvement, and all cases gained clinical improvement. No fatalities occurred during hospitalization, but none of the inflammation indexes changed significantly after MSCs therapy. In addition, the serum levels of lactate (LAC), cardiac troponin T (cTnT), and creatine kinase MB (CK-MB) elevated significantly after MSC therapy. The authors discussed that maybe no immunomodulation was observed because the optimal detection time frame was lost. Finally, MSCs therapy appears to be a promising option for treating severe COVID-19 but should be used with caution, especially in patients with coronary heart disease and metabolic acidosis [33].
The importance and immunomodulatory effects of MSC-derived extracellular vesicles (EV) in vitro emerged as a potential tool for treating COVID-19. This is due to a marked anti-inflammatory effect and regenerative capacity in various in vitro and in vivo models of the disease [34][35]. MSC-derived EVs are also promising in treating post-COVID-19 pulmonary fibrosis, described as a complication in COVID-19 patients [36]. This possibility is reinforced by the observation that MSC-derived EVs can prevent the development of fibrosis following experimental lung injury [37].
In one of the studies using MSCs to treat COVID-19, exosomes derived from allogeneic bone marrow MSCs (ExoFlo) were used in twenty-four SARS-CoV-2 PCR-positive patients. Patients with moderate-to-severe ARDS received a single 15 mL intravenous dose of ExoFlo and were evaluated for treatment safety and efficacy for fourteen days. The results were very encouraging, with no adverse effects, and reached an 83% survival rate. Of the total patients, 71% recovered, 13% remained critically ill though stable, and 16% died for reasons unrelated to the treatment. Laboratory results revealed a reduction in blood neutrophils, CD4+, and CD8+ lymphocyte numbers in recovering patients. Likewise, acute phase reactants declined, with mean C-reactive protein, ferritin, and d-dimer reduction [38].