Parthenin, a sesquiterpene lactone of pseudoguaianolide type, is the representative secondary metabolite of the tropical weed Parthenium hysterophorus (Asteraceae). It accounts for a multitude of biological activities, including toxicity, allergenicity, allelopathy, and pharmacological aspects of the plant. Thus far, parthenin and its derivatives have been tested for chemotherapeutic abilities, medicinal properties, and herbicidal/pesticidal activities. However, due to the lack of toxicity-bioactivity relationship studies, the versatile properties of parthenin are relatively less utilised. The possibility of exploiting parthenin in different scientific fields (e.g., chemistry, medicine, and agriculture) makes it a subject of analytical discussion. It is important to highlight that the toxic nature of parthenin can be overcome by thoroughly understanding its structural basis, designing suitable derivatives, and deciding the appropriate doses.

Parthenin (1,6-β-dihydroxy-4-oxo-10αH-ambrosa-2,11(13)-dien-12-oic acid-γ-lactone; 6α-hydroxy-6,9α-dimethyl-3-methylene-3,3α,4,5,6,6α,9α,9β-octahydro-azuleno(4,5-β)furan-2,9-dione), a pseudoguaianolide sesquiterpene lactone with molecular formula: C15H18O4 and molecular weight: 262.305 g mol−1, is the major constituent of an invasive tropical weed Parthenium hysterophorus (ragweed parthenium; Asteraceae)[1]. It is mainly sequestered in the capitate-sessile trichomes present on different parts of P. hysterophorus, with the maximum amount being sequestered in the leaves[2]. Structurally, it is composed of a seven-membered ring assuming chair conformation and the two five-membered rings (cyclopentenone and lactone ring) assuming envelope conformations (Figure 1)[3]. The presence of α-methylene-γ-lactone moiety and β-unsubstituted cyclopentenone ring along with five chiral centres is held responsible for its susceptibility to various biochemical groups and its wide spectrum of biological activities[4]. The presence of the two centres for the Michael addition of biological groups (α-methylene part of lactone moiety and the double bond of the cyclopentenone ring) impart alkylation properties to parthenin, which enables it to form adducts with –SH sulfhydryl compounds (e.g., cysteine and glutathione)[5][6]. This ability to react with –SH groups is non-specific and is of great biological significance as it increases the tendency of parthenin to react with the various nucleophiles, key enzymes, and factors involved in biological processes[7]. The presence of multiple reactive sites in the compound also provides a template for the structural modifications exploited by chemists and biologists for investigating further possibilities. 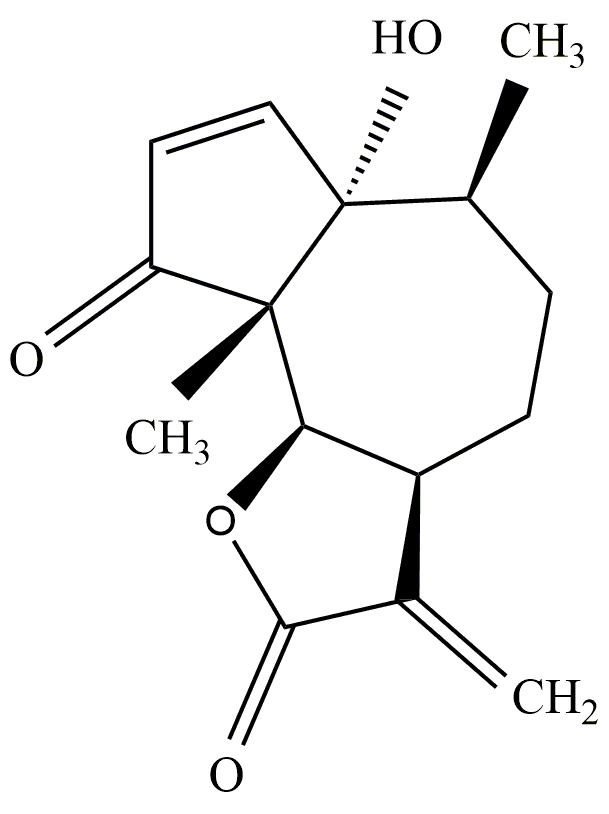 Parthenin is derived from the mevalonic acid pathway via formation of farnesyl pyrophosphate. Under natural conditions, it is either leached from the plant through ruptured trichomes and root exudates or released by decomposed tissues[8]. It can be extracted from its natural source, P. hysterophorus, using the powdered plant material; fractioned by preparative high-performance liquid chromatography with UV detection[9]; or produced synthetically via several methods as reviewed by Barbero and Prandi[10].

Pharmacological research on parthenin emerged in the 1970s in Mexico when it was isolated from P. hysterophorus to evaluate its medicinal value[11]. Since then, pure parthenin, and its derivatives have been explored for their medicinal aspects.

In 1982, pure parthenin was described as a novel anti-cancerous lead by Mew and colleagues[12], who reported a significant reduction in tumour size and spread, and an enhanced survival of the test species when the compound was assayed against tumour cell lines. This observation was strengthened by further investigations involving parthenin and its structural analogues. Parthenin and its derivatives exhibit cytostatic and anti-angiogenic potential[13], chemotherapeutic abilities[5], and anti-proliferative activities[14]. For example, analogue P16 (Figure 2a) inhibited human acute lymphoblastic leukaemia MOLT-4 cells[15] and pancreatic adenocarcinoma PANC-1, Mia PaCa-2, and AsPC-1 cells[13], and analogue P19 (Figure 2b) inhibited proliferation of human myeloid leukaemia (HL-60) cells[14]. Several spiro-derivatives of parthenin (benzonitrile oxides, nitrones, and azides) with an exocyclic double bond of C ring (α-methylene-γ-butyrolactone) exhibited improved anti-cancerous activity and low mammalian toxicity compared with parthenin[16]. SLPAR13 (Figure 2c), a spiro-isoxazolidine derivative of parthenin, caused cell death in three human cancer cell lines, namely HL-60, SiHa, and HeLa[17]. 1,2,3-triazole derivative of coronopilin (Figure 2d), synthesised from parthenin, were effective against PC-3 cell lines (IC50 value = 3.1 μM) as well as against the NF-κB (p65) transcription factor (with 80% inhibition in 24 h at 100 μM)[18]. These studies represent parthenin as a future chemotherapeutic drug.

Parthenin exhibited potent activity against a multi-drug resistant strain of Plasmodium falciparum and a striking structural similarity with a new anti-malarial drug, qinghaosu, at the molecular level[19]. The activity of parthenin against P. falciparum was effective enough to potentially replace the artemisinin-related drugs in case of artemisinin-resistant parasites[20]. Parthenin exhibited amoebicidal activity comparable with that of the standard drug metronidazole when tested against Entamoeba histolytica[21]. It demonstrated anti-inflammatory activity using the in vitro expression of TNF-α, IL-1β, and IL-6 in murine neutrophils[22]. Parthenin and its regio- and stereoselective derivatives exhibited antibacterial activity against different gram-positive and gram-negative organisms[23].

The herbicidal properties of pure parthenin have been examined against Ageratum conyzoides, Bidens pilosa, Avena fatua, and Cyperus rotundus[24][25][26]. Both pre- and post-emergent application of parthenin affected seedling growth, dry weight, and photosynthesis in Amaranthus viridis, Cassia occidentalis, Echinochloa crus-galli, and Phalaris minor[27]. The concentrations of parthenin that affected the agricultural weed A. conyzoides did not seem to affect the crop Triticum aestivum[24], pointing towards the selective phytotoxicity of the compound. Even though parthenin suppresses its competitors, certain interesting observations were made in Phaseolus aureus, Sinapis arvensis, etc., where growth stimulatory effects were seen at low concentrations upon the application of parthenin or its derivatives[8][28]. This indicates the possibility of developing suitable compounds/doses that could encourage “herbicide-related hormesis” (an herbicide stimulating growth in crops along with weed management). With more precise knowledge about the specific concentrations that selectively affect a particular weed, the duration of exposure, and the mode of treatment, parthenin can be successfully utilised for managing the uncontrolled growth of weeds.

The toxicity of parthenin is a major hindrance to its medicinal use. The unpalatability of its constituent weed, P. hysterophorus, is attributed to the presence of parthenin. The compound is compartmentalised into the glandular trichomes of P. hysterophorus to prevent autotoxicity in the plant[31]. It is also the major antigen responsible for the incidence of contact dermatitis in humans upon exposure to P. hysterophorus[32].

The clastogenic effects of parthenin have been observed in terms of chromosomal aberrations (mainly chromatid breaks) and nuclear alterations such as pycnosis, micronuclei, and karyorrhexis in the animal tissues, which are the outcomes of interrupted cytokinesis, nuclear restitution, and DNA replication[33]. Nearly 50% inhibition in RNA, DNA, and protein synthesis and deterioration in the activities of key cellular enzymes were observed after 24 h of treatment with 1 μg mL-1 of parthenin[34]. Its interference with mitochondrial oxidative phosphorylation is also evident in certain cases.

To overcome toxicity of the compound and to improve the efficacy of its bioactivities, the following suggestions can be employed:

Obtaining suitable derivatives through structural modifications may reduce the levels of toxicity and may enhance the effectiveness of the compound. As already discussed, several parthenin derivatives have been tested along with the compound for pharmacological and pesticidal applications. Studies have shown that the performance and safety profile of these derivatives are relatively much better when compared with the parthenin. It has been suggested that generating the monofunctional analogues of parthenin could overcome its toxicity-based limitations. The 1,3-dipolar cycloaddition of diazomethane to parthenin gave complete chemoselectivity and 81% of diastereoselectivity in favour of the (11S)-stereoisomer to its spiropyrazoline[35]. Saturated lactone derivative of parthenin was 2.25 times more active than parthenin, and the other modified compounds, e.g., propenyl derivative (Figure 3a), pyrazoline adduct (Figure 3b), and a rearranged product of parthenin (Figure 3c), were proven to be more effective herbicides, insecticides, and nematicides, respectively[29]. A C16-derivative of parthenin is reported to enhance the growth and development in maize and mung bean[36]. Recently, two derivatives, namely, ethylene glycol derivative and 2a-azidocoronopolin, synthesised by derivatisation of α, β-unsaturated carbonyl group of parthenin through the addition of hydroxyl groups, were found to exhibit 2‒4-fold higher larvicidal effects against Anopheles gambiae[37]. Similarly, certain derivatives of parthenin exhibited improved pharmacological properties compared with parthenin[5][16]. Endocyclic unsaturation of parthenin through regioselective Baylis Hillmann adducts resulted in analogues with reduced cytotoxicity[5]. Microbiological transformation is another method of introducing substituents into the carbon skeleton of parthenin without disturbing the chromophores, and such efforts were made with the fungi Sporotrichum pulverulentum and Beauveria bassiana. This yielded a C-11 hydroxylation product (Figure 4a) and a C-11 reduction product (Figure 4b) of parthenin, respectively, with entirely different properties[38]. Such modifications can provide an effective solution to the limitations encountered, particularly with respect to toxicity and efficacy. 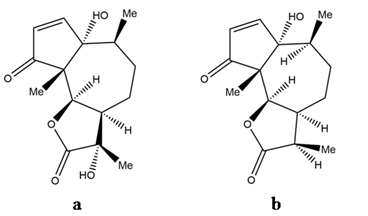 The most important aspect to be determined before exploiting parthenin as a medicinal drug or pesticide is the concentrations that are apparently safe. Toxic substances can be stimulatory or beneficial at low doses, as seen in most pharmaceutical drugs[39]. An assortment of the non-toxic concentrations of parthenin not only enhances its application as a pharmaceutical product or pesticide but may also promote “herbicide-related hormesis”.

Before deciding the applications of a compound, it is imperative to understand how it behaves under different environmental conditions. Parthenin has been researched for its phytochemical properties, but only a few studies have addressed the issue of the accumulation and stability of parthenin in the environment. The question is important from two different perspectives, as it will decide its efficacy as a pesticide and the extent of its environmental impact. The fate of parthenin in soil was found to be governed by several physiochemical and biological processes[40]. Soil sterilisation and low soil moisture slowed down the degradation of the compound, whereas high temperature, soil preconditioning with parthenin, the clayey content of soil, and parthenium infestation accelerated its decomposition[40]. Rajiv and co-workers[41] reported the eradication of parthenin by earthworms and microbes through vermicomposting. However, quantitative results with more certainty are demanded in this regard.

Protocols regarding the extraction process of parthenin also need to be simplified to ensure its wider applicability. Production of the compound should be enhanced via tissue culture or other biotechnological approaches[24]. Apart from this, not much is known about its interaction with various biotic and abiotic components present in the environment.

In conclusion, it can be said that parthenin is a novel, unexploited, and undermined molecule that, despite being characterised by a multitude of properties, is neglected due to the lack of systematic studies. A large part of this negligence is attributed to the toxic properties of parthenin, which is a primary factor limiting its applicability. This is especially true in the case of pharmacological aspects, which mainly depend on the toxicity-bioactivity relationship of a compound. However, there is much evidence in the literature that states the possibility of overcoming the toxic nature of parthenin by thoroughly understanding its structural basis, designing suitable derivatives, and deciding the appropriate doses. At the same time, it is also important to look for unanswered questions pertaining to its synthesis, stability, and impact on the environment. By focusing on these aspects, expanding the research in wider directions, and utilising recent biotechnical advancements, it is feasible to develop a range of apposite derivatives, drugs, pesticides, and biological substitutes that could be exploited for multipurpose activities.