Interferons (IFNs) are cytokines involved in the immune response that act on innate and adaptive immunity. These proteins are natural cell-signaling glycoproteins expressed in response to viral infections, tumors, and biological inducers and constitute the first line of defense of vertebrates against infectious agents. They have been used in different presentations for several therapy applications. However, their administration has presented difficulties due to the molecules’ size, sensitivity to degradation, and rapid elimination from the bloodstream. An alternative to overcome these drawbacks is to formulate drug delivery systems to provide adequate therapeutic concentrations for these cytokines, decrease their toxicity and prolong their half-life in the circulation.

Interferons are a family of cytokines whose functions have been known for more than six decades [1]. There are three main groups: type I, type II, and type III IFNs. Type I IFNs include eight different subtypes classified according to the Greek letters α, β, ε, ω, κ, δ, τ, and ζ [2]. Within type I, IFN-α and IFN-β stand out for their potent antiviral function [3], activated through a signaling cascade triggered by heterodimerization of IFN-α/β receptor 1 (IFNAR) of nucleated cells [4]. This pathway induces the expression of more than a thousand IFNs-stimulated genes (ISG[3]s) [5], whose generated proteins, such as 2–5 synthetase, protein kinase R (PKR), Mx protein, viperin, among others, play an essential role in the suppression of viral propagation [6]. IFN-α also possesses antiproliferative and immunomodulatory effects, through its function on apoptosis activation, mitotic cycle arrest, increased expression of major histocompatibility system (MHC) class I, stimulation of natural killer (NK) cells, and antigenic presentation [7]; as well as promotion of B and T lymphocyte differentiation [8][9].
IFN-γ is the only type II IFN. Its primary function is regulating innate and adaptive immune responses, acting as a link between the two defense systems [10]. Additionally, it promotes antiviral immunity through its regulatory effects on the innate immune response [11]. The impact of IFN-γ as an antiviral on antigen-presenting cells (APCs) is to enhance the stimulation of the adaptive response to eliminate infection and generate protective memory for future infections [12]. This cytokine is a critical inducer of the Th1-type T cell response by optimizing the antigenic presentation process to MHC-I [13]. IFN-γ also increases MHC-II expression and the maturation of dendritic cells [14]. IFN-γ binding to its receptor (IFNGR) initiates a signaling cascade that activates its response [15].
Therapy with type I and II IFNs has encountered difficulties due to the size of the molecules, their sensitivity to degradation, and rapid elimination from the blood circulation [16]. The half-life of these cytokines is very short (2–3 h for IFN-α, 10 h for IFN-β, and 4.5 h for IFN-γ) [17][18][19]. This rapid clearance in blood makes administering high nonphysiological doses necessary, preferably parenterally [20]. This condition leads to substantial and unavoidable toxicity that limits its effectiveness, causes the occurrence of a variety of adverse events for the three types of IFNs [21][22][23], and weakens the quality of life of treated patients [24]. These limitations in clinical use have motivated the development of alternative delivery systems to achieve greater therapeutic efficacy and decrease its toxicity [25][22].

Drug design systems that encapsulate therapeutic proteins maximize their biological potential, provide transport matrices that avoid the influence of weak non-covalent interactions (van der Waals forces) and electrostatic interactions that alter protein stability [26]. It also protects the cargo proteins from degradation by enzymes found at the administration site or during transport to the site of action, thus increasing their half-life [27].
New encapsulated formulations for IFNs have demonstrated several challenges, such as electrostatic interactions between IFNs (isoelectric point) and acidic end-groups of the encapsulation matrices (hydrolysis) with consequences on release; the pH of the formulation buffer and its variants with impact on solubility, stability, and aggregation [28]. Efficient encapsulation has been related to stabilizers that support particle size modulation and correlate with release patterns and biological activity [29]. Some of the encapsulations have shown the necessity to consider the polarity of the protein concerning the encapsulant. For example, in amphipathic nanovectors (polymeric micelles), molecules are encapsulated by stimulating protein-like polarity so that hydrophobic structures interact with hydrophobic parts of the system, and hydrophilic portions interact with hydrophilic regions [30]. Protein aggregation is related to hydrophobic interactions, encapsulating it through hydrophilicity to ensure stability [31][32].
Some IFNs’ transport systems that have been studied and evaluated include PEGylation, self-assembled nanostructures such as liposomes and micellar systems, microparticles, and nanoparticles (metallic, polymeric, or hybrid) [33] (Figure 1). For developing these platforms, criteria of safety, biocompatibility, biodegradability, and compatibility of the encapsulating material with the drug must be considered and comply with the parameters that determine the functionality of a nanoparticle, such as its size, shape, and surface characteristics [34]. However, bringing this approach towards clinical application requires careful evaluation of efficacy, safety, and manufacturing [35]. 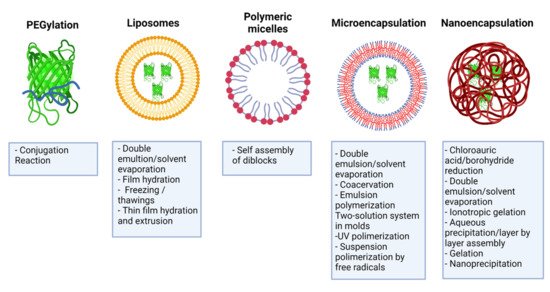 PEGylation was the first formulation aimed at improving the pharmacological properties of IFNs [36]. It consists of the covalent bonding of poly(ethylene glycol) (PEG) chains to a drug to increase its half-life, reduce its clearance, and improve its pharmacokinetics and pharmacodynamics [37]. PEG is FDA approved for systemic applications [37] due to its pharmaceutically relevant properties: increases IFN solubility and stability by decreasing proteolytic degradation; reduces renal clearance rate by increasing the size of the renal boundary molecule, decreases plasma clearance, improves the safety profile of the protein by protecting antigenic and immunogenic epitopes; and increases circulation time, high mobility solutions, and low toxicity [38][39].
Through covalent conjugation of PEG to IFN molecules, several formulations of PEGylated IFNs were developed using two types of conformation, linear and branched: Pegasys® (Hoffmann La Roche Inc., Basel, Switzerland), conjugate IFN-α-2a to a 40 kDa branched-chain via amide linkages [40]; PegIntron® and ViraferonPeg® (, link IFN-α-2b to a 12 kDa linear molecule via a urethane linkage [41]; and Plegridy® (Biogen, Cambridge, MA, USA), couple IFN-ß-1a to a 40 kDa linear PEG chain with amide linkages [42]. These forms of PEGylation with IFNs showed reduced excretion through the kidneys [43], with a five- to tenfold increase in half-life time, resulting in more stable drug concentrations in the plasma of patients [44], and replacing systemically applied IFNs [45][46]. This platform directly enhanced the drug’s pharmacokinetics, making possible less frequent dosing intervals of PEG-IFN-α on patients with chronic hepatitis B and C while still effectively reducing their viral load [47][48]. PEGylation of IFN-ß used in multiple sclerosis therapy resulted in a more comfortable regimen for the patient by reducing the dosage [48].
The loss of IFN activity caused by PEGylation is up to 80% of native IFN, which increases the amount of drug necessary to obtain an antiviral effect equivalent to that of native cytokine, and thus a more significant induction of toxicity [49]. Therapy with these encapsulated formulations can cause a range of adverse events, from mild to severe, such as diabetes, liver neoplasms, or psychotic disorders [45][50]. The decrease in bioactivity could not always increase the in vivo therapeutic efficacy of IFN [51], so treatments with these molecules are often unsatisfactory and should be discontinued [52].
In conclusion, although PEGylation of IFNs initially improved treatment efficacy, their toxicity has relegated the therapy to second-line status in most developed countries. Formulations still need to be developed using alternative strategies to increase the stability and reduce the clearance and toxicity of IFNs without compromising their biological activity [6].

Liposomes are spherical structures formed by one or more concentric lipid bilayers surrounding aqueous spaces [53]. They consist of phospholipids and cholesterol, formed by hydrophobic interactions and other intermolecular forces, and possess hydrophobic and hydrophilic regions [54]. Liposome-based drug delivery systems have shown unique characteristics to cross biological obstacles and improve pharmacodynamics [55]. Some of the advantages of this delivery system include biocompatibility, low immunogenicity, self-assembly ability, and the ability to transport drugs, such as IFNs, thereby reducing systemic toxicity and prolonging residence time in the circulation [53]. There are different liposomal formulations for encapsulating chemotherapeutic drugs, antifungals, and vaccines, currently approved by regulatory agencies for clinical application [56].

Polymeric micelles are nanocarriers formed by the spontaneous arrangement of amphiphilic block copolymers in aqueous solutions [60]. Block copolymers are macromolecules of two or more different polymers joined by covalent bonds to form one structure. Its molecular conformation depends upon the number of blocks. Diblock copolymer consists of two homopolymers, while triblock copolymer has three homopolymers. More complicated architectures such as mixed arm block copolymers contain three polymer chains covalently joined at a common branching point [61]. Polymeric micelles possess a two-phase structure: a hydrophobic core and a hydrophilic corona that allows modifications to their surface [30]. Polymeric micelles have several advantages for drug delivery, such as their increased solubility, enhanced stability of the molecule, structural flexibility, capacity to encapsulate a wide range of therapeutics, and the possibility of adjusting their size at the nanometer scale [30][61][62]. Modifications in the corona make it possible to reduce their clearance by the RES, thus prolonging their circulation time [63]. In this way, it is feasible to decrease the drug dose and the toxicity associated with drugs such as IFNs [30].

This technique makes it possible to protect sensitive drugs from the external environment in micrometer structures [64]. The products of this encapsulation are microparticles distinguishable as microspheres or microcapsules according to their internal constitution and morphology [65]. Microspheres act as reservoir systems that embed the active ingredient in the particle matrix. In contrast, microcapsules consist of matrix systems comprising the drug as the core and the particle material as the capsule shell [66]. Various subtypes of IFNs have used microsphere encapsulation for multiple purposes [67].

Researchers worldwide have evaluated the possibility of encapsulating IFNs using nanoparticle systems since nanoformulations can improve its therapeutic index, especially in IFNs with a short half-life that therefore require frequent administration of high doses [68][69]. Nanoparticles are nanoscale structures that, like microparticles, can be capsules or spheres depending on their internal constitution [70]. These systems make it possible to simplify the administration of IFNs, improve their therapeutic effects and reduce their dose-related side effects without reducing their biological activity or changing the protein structure [71].

There is great interest in achieving the encapsulation of interferons due to the diversity and effectiveness of their biological functions and the wide range of applications on the three major groups of immune system conditions, infectious, proliferative, and autoimmune. Researchers have applied various delivery methods, categorized as particle delivery systems, including micro and nanoparticles, liposomes, mini pellets, cell carriers, PEGylated IFNs, etc.
Nanoparticulate systems are very successful as a tool for developing peptide and protein delivery, capable of enhancing the efficacy of established drugs and new molecules. Due to their sustained release properties, subcellular size, and biocompatibility with tissues, these formulations have shown promise for the encapsulation of IFNs, allowing the bioavailability of drugs and improving the pharmacokinetic profile of other drugs for biomedical purposes. To date, an incredible amount of research has demonstrated the usefulness of nanoparticles in the formulation of new drugs and the protection they confer on mucous membranes and biological fluids by favoring penetration into cells. The final success in finding a nanoencapsulated formulation for interferons will be to prove their therapeutic potential and demonstrate their safety by integrating the research results with the pharmaceutical industry. We also know that selecting an appropriate route of administration will have a marked influence on the outcome of the proposed formulation, and we believe intranasal drug transfer could contribute to this outcome.