Multiple sclerosis (MS) is an autoimmune disease of the Central Nervous System, characterized by an inflammatory process leading to the destruction of myelin with neuronal death and neurodegeneration. In MS, lymphocytes cross the blood-brain barrier, creating inflammatory demyelinated plaques located primarily in the white matter. MS potential treatments involve various mechanisms of action on immune cells, immunosuppression, inhibition of the passage through the blood-brain barrier, and immunotolerance.

Multiple sclerosis (MS) is a chronic inflammatory disease of the Central Nervous System (CNS) [1][2], caused by a response of T and B cells towards the myelin sheath surrounding the axons of the CNS [3][4]. This process triggers an early inflammatory state, which ultimately culminates in demyelination and neuronal degeneration [2][5]. The origin of MS is still unknown. It is assumed that genetic and environmental factors (smoking, toxins), low vitamin D levels, obesity, microbial and viral infections, can contribute to its onset [1]. Worldwide, 2.3 million people are affected by MS, with an incidence rate of approximately 50–300 per 100,000 people [6]. MS can evolve into different profiles, Relapse-Remitting (RR-MS), in most patients (80–85% of MS cases) and, less common, primary progressive course (PP-MS) [7]. RR-MS can turn into a progressive course, referred to as secondary progressive (SP-MS) [7]. The typical neurological symptoms of MS include visual field disturbance, double and blurred vision, motor symptoms such as weakness of the face and extremities, bladder/bowel problems, walking difficulties, spasticity (stiffness and muscle spasms), and dizziness. The diagnosis of multiple sclerosis is based on the integration of clinical, imaging, and laboratory findings [7].

Treatment “first-line therapies” are mainly aimed at preventing the onset or relapse of patients. The administration of anti-inflammatory drugs is the most common therapy; attempts are made to extensively suppress the immune system, leading to the deletion or inactivation of entire subgroups of T cells [8].

In addition, to MS immunosuppressive treatments, there are other mechanisms of action on immune cells aimed to inhibit their passage through the Blood-Brain Barrier (BBB) and their immunotolerance. Interferon (IFN) administration, as IFN beta-1α and IFN beta-1β, has generally been used as “first-line therapy” [8], injected either intramuscularly or subcutaneously. IFN-beta 1α and 1β modulate T and B cells and regulate cytokine release [9]; however, these treatments exhibit a series of adverse effects and are only moderately efficacious. Natalizumab (the first approved intravenous drug) is a monoclonal antibody against integrin α4, which blocks the entry of lymphocytes into the CNS [10]. Although the efficiency of Natalizumab in MS relapse is superior to that of IFN, its administration is accompanied by noxious side effects [10]. Therefore, it is used in MS patients who do not respond positively to other treatments. Rituximab and Obinutuzumabis are antibodies against CD20 on B-lymphocytes, causing their depletion. Mitoxantrone has cytotoxic effects against B cells as well as T-helper and T-cytotoxic lymphocytes, but its use is limited due the side effects. In addition, several approaches aimed at restoring immune tolerance were tested [11]. Indeed, it is thought that the first event occurring in the MS pathogenesis is a tolerance breakdown, which determines the activation of naive myelin-specific T cells in healthy individuals [11]. Antigen-specific immunotherapies aim to restore immune tolerance without suppressing overall immune surveillance against microbes and cancer [11].

2. Why Is a Nano-Therapeutic Approach Needed to Treat MS?

Multiple sclerosis is a complex disease, and its underlying mechanisms are only partially understood. Moreover, the involvement not only of peripheral immune cells (T and B lymphocytes) but also of the central ones (microglia) makes the therapeutic target complex. Therefore, in addition to acting at the peripheral level, the treatment must also act at the level of the CNS. Here, MS therapy is accompanied by low efficacy due to the presence of BBB and the occurrence of side effects due to the dispersion of the drugs that fail to enter the CNS [12]. Furthermore, it is important to administer therapeutic agents to the MS lesions present in different place of the CNS, without affecting other normal CNS tissues in order to avoid further damages. The use of nanoscale materials is expected to provide unique opportunities to: (i) improve drug solubility and bioavailability; (ii) enable targeted delivery and controlled release and, consequently, (iii) increase effective routes of administration and (iv) reduce toxicity. Interestingly, not only can nanovectors (extracellular and artificial vesicle nanoparticles) act as carriers of relevant molecules, but they can also trigger an immunomodulatory effect [12]. Indeed, variations in the chemical composition, size, and shape of the nanovector have a different impact on the immune target and immune response that could be even more significant in the context of autoimmune diseases [12]. In MS, the use of nanovectors has been investigated as drug delivery systems and as vectors for antigen-specific immunomodulation.

Extracellular vesicles (EVs) are an umbrella term for the small submicrometer-sized particles composed of lipid membranes released by the cells. Depending on their size, EVs are usually subdivided into exosomes, small particles with a diameter of 10–100 nm, microvesicles, larger vesicles whose diameter is in the range 100–1000 nm, and apoptotic bodies (>1000 nm) [13][14][15]. EVs are released by the different neural cells, including neurons, oligodendrocytes, astrocytes, and microglia [16][17]. It has been reported that EVs can deliver different kinds of molecules, such as nucleic acids and proteins, which often influence the phenotype of recipient cells [18][19][20]. The EVs play a role in several physiological processes in the CNS, such as development, myelination, regeneration, synaptic activity, and could be involved in neuropathology or, conversely, in regeneration and repair, providing protection against injury or promoting the illness [21]. Due to their content, EVs could therefore constitute a clinically important biomarkers for neurodegenerative diseases [22], or by constituting a physiological intercellular communication system, they can also represent candidates for therapeutic use, enclosing regulatory molecules [23]. Finally, EVs could be considered as carriers for specific brain drug delivery of small therapeutic molecules to contrast neurodegenerative disorders [23] (Figure 1). 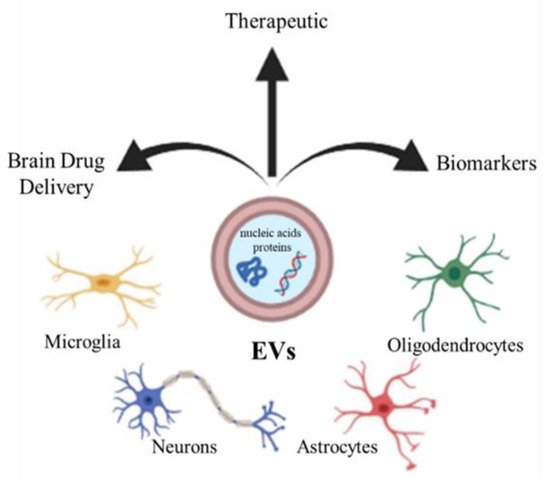 Figure 1. CNS cells (microglia, neurons, astrocytes, oligodendrocytes) release extracellular vesicles (EVs), which can be used as biomarkers, therapy, and drug vectors to the brain.
Furthermore, EVs such as exosomes present good biocompatibility, low immunogenicity, and can easily pass through the BBB. Several studies have shown the therapeutic potential of EVs from different cellular sources against MS [24] (Figure 2). Administration of EVs derived from human adipose tissue-derived mesenchymal stem cells might mediate repair mechanisms in CNS damage and promote recovery in Theiler’s murine encephalomyelitis virus (TMEV)-induced demyelinating disease, a progressive model of MS [24]. Microglial cells are a component of the innate immune system within the CNS. Microglia participate in both myelin injury and remyelination during MS. During chronic inflammation, activated microglial cells can also participate in tissue destruction through antigen presentation and release of pro-inflammatory factors. Experiments on EAE have also revealed correlations between microglial and macrophage activation and the disease as their depletion or inactivation resulted in a delay of the disease onset along with decreased severity of clinical symptoms [25]. Lombardi and collaborators showed that EVs released by pro-inflammatory microglia blocked remyelination, whereas EVs produced by microglia co-cultured with immunosuppressive mesenchymal stem cells promoted Oligodendrocyte Progenitor Cells (OPCs) recruitment and myelin repair [26]. The authors proposed that the cargo, carried by EVs, has an effect on the inhibition of the OPCs differentiation, while EVs surface lipids have been identified as important factors to promote promyelinating action. In particular the sphingosine 1 phosphate (S1P) in EVs has been revealed as the key molecule promoting OPCs migration, the first step in the remyelination process [26]. Moreover, dendritic cells-derived exosomes administered to the brain markedly enhanced myelination and improved remyelination after injury by stimulating OPCs in myelin-generating cells [27]. In particular, the authors demonstrated that IFNγ-stimulated dendritic cells (DCs) released exosomes containing microRNAs that can increase basal myelination, reduce oxidative stress, and improve remyelination in lysolecithin-induced acute demyelination [27].
Moreover, engineered EVs may represent a biological drug delivery tool able to deliver simultaneously different multiple functional molecules to treat neuroinflammatory diseases. BV-2 murine microglial cells, have been engineered to release EVs, containing the Lactadherin (Mfg-e8) on the surface to target phagocytes and the cytokine IL-4 as anti-inflammatory agent [28].

With the aim of mimicking the characteristics of natural vesicles, the researchers focused on the fabrication of artificial vesicles (Art-Vs), which consist of an aqueous core encapsulated by a lipid bilayer (artificial membrane). The membrane-like structure is capable of loading lipid-soluble drugs while the hydrophilic nuclei have the ability to encapsulate water-soluble drugs [29].
Moreover, since MS affects the CNS, delivering therapeutic agents across the BBB is an important challenge. The ability to modify both the chemical and physical characteristics (dimensions, shape, polydispersity, surface, stability, and loading capacity) of the Art-Vs allows different types of biomedical applications. Liposomes are the first type of Art-Vs investigated. Liposomes protect loaded molecules from degradation, and release them into specific target cells [30]. Moreover, to increase the BBB permeability and the concentration of the drug in CNS lesions, cell-penetrating peptides (Trans-acting Activator of Transcription-TAT), were introduced inside the liposomes [31]. Moreover, liposomes are approved by the Food and Drug Administration (FDA) as therapeutic agents for drug delivery due to their safety and tolerability [32]. Several data have indicated the therapeutic potential of liposomes in MS (Figure 2). In particular, many of the applications with liposomes concern the encapsulation of antigenic myelin peptides in order to induce an immune tolerance effect. The mechanisms of induction of tolerance can lead to the induction of DCs and immunosuppressive macrophages, to the reduction of CD4+ T helper 1 and 17 lymphocytes, and to the induction of regulatory T (Treg) cells [33][34].
In the MS application, MBP fragments encapsulated in mannosylated liposomes suppressed the encephalomyelitis autoimmune, in EAE rodent model of MS, reducing the severity of the first attack and facilitating recovery from the acute state [35]. The same authors studied the role of the polypeptide fragments [MBP46-62 (GH17), MBP124-139 (GK16), and MBP147-170 (QR24) peptides] encapsulated in mannosylated liposomes in the release of cytokines and activation of immune cells from MS patients and healthy donors. They demonstrated that GH17 rebalances T cells to being CD8+ and induces the production of IL-10 anti-inflammatory cytokine that may contribute to the improvement of the first disease attack. By contrast, QR24 and GK16, which are mainly effective in preventing a second wave of exacerbation of the disease, induce the release of pro-inflammatory cytokines, shifting the CD4/CD8 ratio to CD4 T cells and promoting the proliferation of CD4+ CD25+ lymphocytes, which are important for maintaining further immune tolerance [36]. More recently, nanosterically stabilized liposomes (nSSL, approved by the FDA for anticancer therapy) loaded with glucocorticoids have shown therapeutic efficacy in PLP-induced EAE. In animals treated with nSSL, recovery from acute disease was also faster than with Betaferon and GA [37]. Furthermore, administration of nSSL loaded Tempamine, in PLP SJL and C57/Bl6 MOG in EAE mice improved the acute and chronic phase of the disease in terms of clinical score and number of inflammatory infiltrates [38][39]. Pujol-Autonell and collaborators prepared liposomes rich in phosphatidylserine (PS) (PS-liposomes), a component present in apoptotic cells modulating the immune responses. PS is recognized by dendritic cell receptors, allowing the encapsulated autoantigen to be presented, inducing an immunotolerant effect. PS liposomes were loaded with the MOG40-55 peptide (MS autoantigen) (PSMOG liposomes) and tested in an EAE mouse model. DCs efficiently captured PSMOG liposomes, inducing a tolerogenic phenotype, ceasing the autoimmune reaction [40]. Kenison and collaborators used nanoliposomes NLPs to codeliver the tolerogenic aryl hydrocarbon receptor (AhR) ligand, 2-10H-indole-30-carbonyl)-thiazole-4-carboxylic acid methyl ester) (ITE) and the disease-specific peptide antigens (MOG35–55). The aryl hydrocarbon receptor (AhR) is a ligand-activated transcription factor that plays a role in modulating the immune response. NLPs with ITE and MOG35–55 induce antigen-specific tolerance and suppress disease in three preclinical mouse models of MS [41]. Prednisolone and methylprednisolone (steroids) encapsulated in PEGylated liposomes have improved clinical parameters in EAE, with respect to free drugs [42][43]. 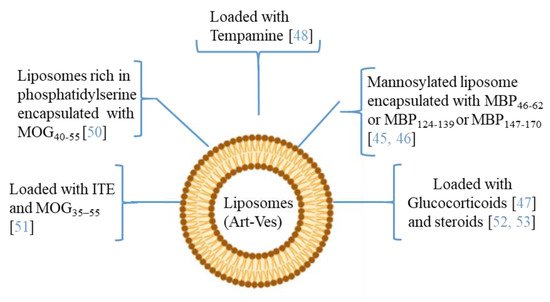 Figure 2. The picture illustrates some researches in which the therapeutic potential of liposomes/artificial vesicles loaded with different molecules, antioxidant, anti-inflammatory (immunosuppressive effect), myelin antigens (immunotolerance effect), or in combination, as a potential therapeutic approach in MS.