Acquiring the recommended daily allowance of vitamins is crucial for maintaining homeostatic balance in humans and other animals. A deficiency in or dysregulation of vitamins adversely affects the neuronal metabolism, which may lead to neurodegenerative diseases. In this article, we discuss how novel vitamin-based approaches aid in attenuating abnormal neuronal functioning in neurodegeneration-based brain diseases such as Alzheimer’s disease, Parkinson’s disease, Huntington’s disease, Amyotrophic lateral sclerosis, and Prion disease. Vitamins show their therapeutic activity in Parkinson’s disease by antioxidative and anti-inflammatory activity. In addition, different water- and lipid-soluble vitamins have also prevented amyloid beta and tau pathology. On the other hand, some results also show no correlation between vitamin action and the prevention of neurodegenerative diseases. Some vitamins also exhibit toxic activity too.

In infants and elderly people, vitamin deficiency is common [1]. Prolonged deficiencies in vitamins lead to malnutrition and severe health issues [2][3]. Interestingly, the typical balanced diet of a healthy population has a rich number of vitamins, which prevent several diseases [4][5]. This has prompted researchers to explore the role of different vitamins in the development and progression of diseases. For this review, we focus on vitamins relative to neurodegenerative diseases.
In general, vitamins are considered organic compounds that are required for the development and normal functioning of the body. The body cannot synthesize vitamins, either at all or not in sufficient quantities. As such, they must be obtained through the diet. Importantly, vitamins commonly function as antioxidants or enzymatic cofactors [6][7]. There are two main categories of vitamins: fat-soluble vitamins, which are stored in the body until your body needs them, and water-soluble vitamins, which are not stored in the body, so a continuous exogenous daily supply is required [8][9].
Generally, vitamins offer a significant advantage for neurodegenerative diseases. Both water- and lipid-soluble vitamins prevent Parkinson’s and Alzheimer’s disease in a substantial manner. The α-synuclein toxicity has been prevented by vitamin supplementation. In addition, vitamins also exert their protective effects on the dopamine transporter. Amyloid and tau pathologies are also progressively prevented by a higher dose of vitamins. Vitamins also show their therapeutic properties for Huntington’s, Prion, and multiple sclerosis diseases. However, some studies show the contrasting activity of vitamins too for the diseases mentioned above. Some vitamins also show toxicity too.

2. The Role of Vitamins in Neurodegenerative Disease

Parkinson’s disease (PD), characterized by several motor and non-motor symptoms, arises due to the degeneration of dopaminergic neurons in the midbrain region [10][11][12][13][14]. This disease has a high incidence in the aging population [15]. Effective treatments, which can stop the initiation or prevent the progression of PD, are not currently available. Only therapies to alleviate the symptoms are available. However, symptoms become worse following prolonged treatment [16]. Now, research is focused on identifying different compounds that can prevent the progression and initiation of PD [17]. Accordingly, in recent years, a role for several vitamins has been suggested for the treatment of PD [18][19]. These vitamin treatments may offer fewer if any side effects and may improve on currently available therapies for PD.
One of the major causative factors responsible for the progression of PD is oxidative stress, and vitamin A (VitA), along with its derivatives such as retinoic acid (RA), exhibits strong antioxidative activity [20][21]. VitA is obtained from both animal and plant sources [22]. Fish, meat, and dairy products are animal sources of preformed VitA (retinol and retinyl ester) (Figure 1) [22]. On the other hand, plant sources provide the precursors of VitA in the form of carotenoids (β-carotene, α-carotene, and β-cryptoxanthin) [22][23]. VitA is involved in multiple signaling pathways that regulate gene expression [20][24]. Specifically, in the central nervous system (CNS), VitA regulates several vital processes such as controlling neural cell differentiation and patterning in neural tube formation [25][26].

Worldwide, Alzheimer’s disease (AD) is ranked first in occurrence among all neurodegenerative diseases [27]. In the aging population, AD is the most common cause of dementia [28]. Clinical symptoms of AD begin with cognitive impairments, which further progress into dementia [29]. AD neuropathology includes the progressive degeneration of neurons, the formation of amyloid (Aβ) plaques, and neurofibrillary tangles (NFT) of the hyperphosphorylated tau protein [30][31]. As such, post-mortem analysis of AD patient brains reveals a reduction in the size of the cerebral cortex and abnormal deposits inside and around neurons [28]. Similar to other neurodegenerative diseases, one of the leading causes responsible for progressive neurodegeneration in AD is oxidative stress [32]. Accumulating evidence has shown that the antioxidative activity of vitamins may be beneficial in the treatment of AD. As such, vitamins have been used as adjuvants in AD therapy [6][33].

Huntington’s disease (HD) is also an example of a progressive, neurodegenerative disease of the CNS. Similar to PD and AD, motor abnormalities, dementia, and psychiatric problems are the main characteristics of HD [34][35]. HD is caused by a dominantly inherited genetic mutation that elongates a section of the huntingtin gene by the repetition of trinucleotide (CAG) segments (more than 36 repeats), leading to toxic intracellular polyglutamine aggregates and neuronal degradation [36][37] (Figure 2). Alterations in vitamins are involved in the pathogenesis of HD [38]. Oxidative stress is one of the major causative factors responsible for progressive neurodegeneration. Antioxidative therapy targeting the reactive oxygen species shows the potential impact of reducing the stress burden in associated neuronal cells [39]. Similar to AD and PD, vitamins also offer strong antioxidative activity and prevent progressive neurodegeneration in HD [40]. 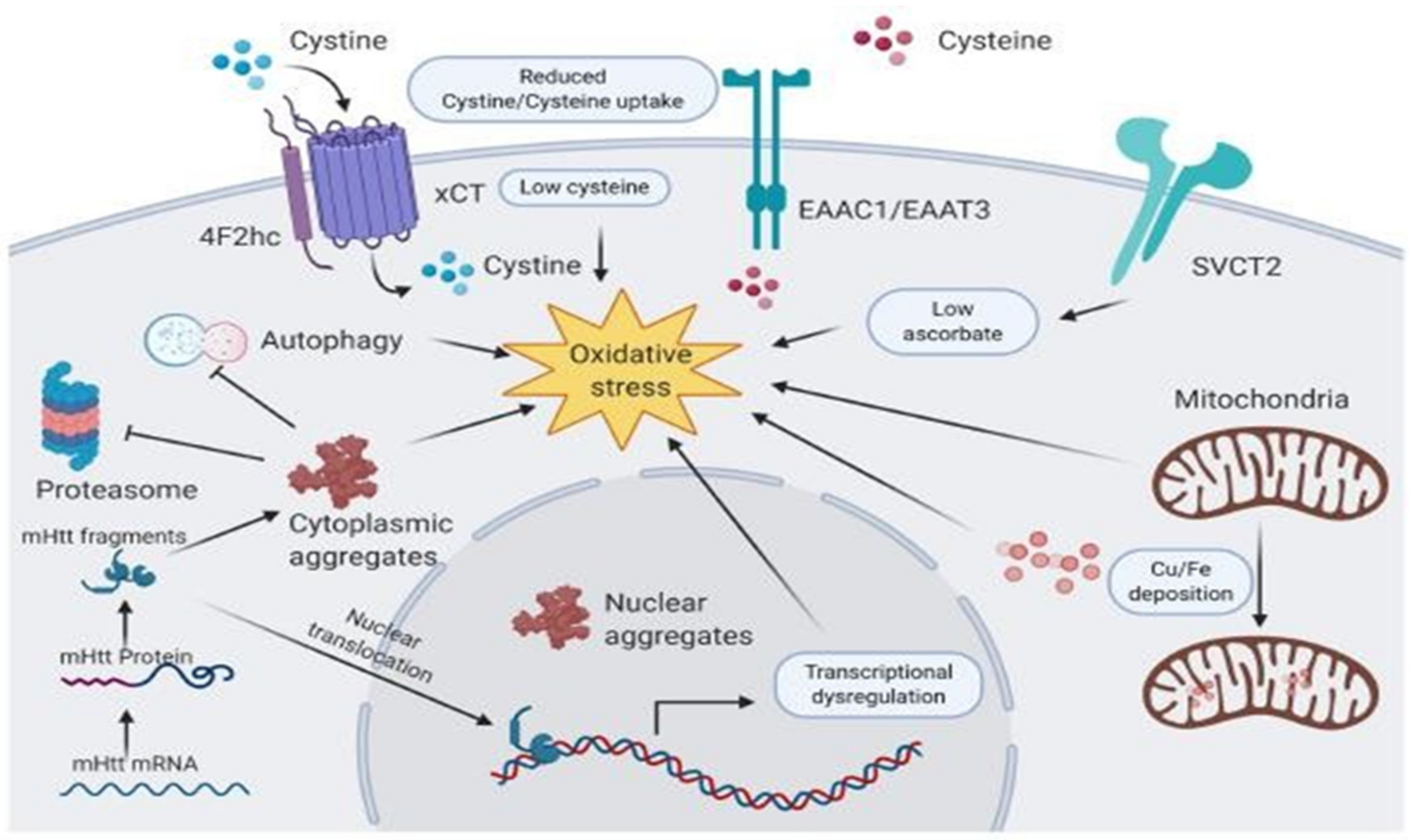 Figure 2. Etiology of oxidative stress behind Huntington’s disease (HD). In HD, reduced levels of ascorbate, cysteine, and antioxidants are observed. Excitatory amino acid transporter 3 (EAAT3/EAAC1) is the cysteine transporter, which is dysregulated and responsible for the reduced uptake of cysteine. Uptake of the oxidized form of cysteine is also reduced, which is mediated through the xCT and 4F2hc complex transporter. Sodium-dependent vitamin C transporters 2 (SVCT2)-mediated uptake of ascorbate (vitamin C), which is also reduced in HD, is responsible for the compromised antioxidant defense system in neurons. Cellular components are damaged because of metal deposition such as iron (Fe) and copper (Cu) in both cytoplasms and mitochondria, generating free radicals. Additional oxidative stress generates the mutant form of huntingtin aggregates (mHtt) in both the cytoplasm and nucleus. mHtt aggregates affect vital cellular processes such as mitochondrial dysfunction, proteostasis, and autophagy. In the nucleus, mHtt affects transcription factors involved in the cell’s antioxidant defense system. mHtt also affects DNA repair processes, which are responsible for damage and the error-prone repair system. Ascorbate (vitamin C) supplementation in HD improves the antioxidant defense system and prevents disease progression.

Multiple sclerosis (MS) is characterized by progressive neuroinflammation and subsequent neurodegeneration [41]. In the CNS, the body’s immune system attacks the myelin sheaths that coat and protect nerve fibers [42][43]. Movement abnormalities, vision problems, fatigue, and pain are common symptoms associated with MS. The etiology of MS is not clearly defined [44]. However, it is thought that both environmental and genetic factors are equally responsible for MS [45]. While there is no cure for MS, the usefulness of vitamins in MS therapeutics has been explored due to their antioxidant activities.
VitD has protective activity in MS that usually depends on the patient’s developmental stage. As such, VitD supplementation was more efficacious at ameliorating MS-like neuroinflammation in a juvenile/adolescent rat model of MS compared to adult aged animals [46]. Observational studies and clinical trials have shown that a reduced level of VitD in the blood is a risk factor for developing MS [47][48][49]. Supplementation with VitD shows potent anti-inflammatory activity by increasing the oxidation of white matter. However, overdosing with VitD can lead to hypercalcaemia, a toxic build-up of calcium in the blood [48][50][51][52][53]. In MS patients, supplementation with VitD enhanced blood perfusion, which supports tissue oxygenation and, therefore, reduced neuroinflammation and neurodegeneration [54]. Several studies suggested that the level of apolipoprotein E and two isoforms of VitD binding protein (DBP) in the cerebrospinal fluid could be utilized as potential biomarkers for the diagnosis of MS [55][56]. In contrast, another study found no association between DBP, MS, and VitD in blood samples from MS patients [57]. Therefore, larger controlled clinical trials are needed to evaluate the efficacy of VitD supplementation in MS therapies.

Prion disease (PRD), also known as transmissible spongiform encephalopathies, is a rare progressive neurodegenerative disorder caused by abnormal prion protein accumulation, which leads to subsequent brain damage [139]. Structural differences occur between two forms of a prion protein [140]. PrPC is the normal prion protein, while the misfolded PrPSc (scrapie) is the pathogenic form [141]. The difference between the two versions of the prion protein is in the secondary structure [142][143]. Secondary structure α-helix motifs within the normal protein are converted to β-sheet secondary structures, which leads to protein misfolding and toxicity. The molecular mechanisms for this conversion are unclear [144]. Vitamins prevent the transformation of the normal form of the prion protein towards the pathogenic form [145]. Various micronutrients, including copper (Cu) and iron (Fe), are also involved in the vitamin-meditated maintenance of the normal form of the prion protein [146]. In addition, it is thought that oxidative stress and inflammation lead to the formation of the pathogenic form of the prion protein. Therefore, compounds or vitamins with antioxidative and anti-inflammatory characteristics should be beneficial in decreasing the risk of PRD [145].
Cobalamin (Cbl, Vitamin B12) deficiency plays a major role in the disturbance of the connection between the CNS and the peripheral nervous system (PNS) [147][148]. Cbl deficiency mainly affects glial cells, myelin sheaths, and the interstitium of the nervous system [149][150]. In the rat CNS, Cbl deficiency causes a reduction in the epidermal growth factor (EGF) and an enhancement of the activity of tumor necrosis factor-α (TNF-α), which leads to myelin damage and glial activation in both the CNS and PNS [151]. Interestingly, Cbl inhibits the nuclear localization of the NF-κB pathway, which is responsible for the upregulation of cytokines such as TNF-α and affects the conversion of the normal form of PrPC to the diseased form [152]. Another vitamin relevant to PRD is VitD2, which effectively crossed the BBB and suppressed PrPc oligomerization, a required step before PrPSc formation [153].

Not only influential in PD, AD, and HD, vitamins also exert their therapeutic response against age-related macular degeneration (AMD). Oral supplementation and modifications in diet show significant protection against AMD [154]. The Age-Related Eye Disease Study 2 (AREDS2) research group suggested that lutein/zeaxanthin plays a very vital role in the protection against AMD [155]. In AMD, the cone cell abnormalities caused by oxidative stress were significantly improved by VitD supplementation [156]. A clinical study on the Korean population exhibits that the degeneration of AMD progresses due to a lower level of VitD [157]. In the pathogenesis of AMD, the VitD metabolism plays a very novel role as suggested by a system-biology-based analysis. Therefore, we can say that vitamins are also very effective against AMD. More study will be needed to confirm the applicability and suitability of vitamins in AMD.