In the field of colorectal cancer (CRC) treatment, diagnostic modalities and chemotherapy regimens have progressed remarkably in the last two decades. However, it is still difficult to identify minimal residual disease (MRD) necessary for early detection of recurrence/relapse of tumors and to select and provide appropriate drugs timely before a tumor becomes multi-drug-resistant and more aggressive.

In spite of remarkable progress in diagnosis and treatment of colorectal cancer (CRC), there are still big challenges to improve the overall prognosis. Current diagnosis of recurrence/relapse is based on tumor biomarkers or imaging modalities including CT, MR, and PET examinations, which fail to detect minute lesions (micrometastases). It should be favorable to know the precise condition of the disease earlier than imaging diagnosis and initiate a proper treatment before clinically overt recurrences are identified. In addition, most patients who receive systemic chemotherapy become resistant during the treatment course and end up in the termination of the treatment with the standardized guidelines. A suitable drug should be selected and provided based on the molecular biological profiles of the tumors before the disease culminates in a far-advanced stage.
With the advance of genomic sequencing technologies typified by next-generation sequencing (NGS), it becomes much easier, more rapid, and less expensive to access comprehensive genomic information of the tumors. There is a high possibility that usage of the in-depth genomic profiles contributes to detection of recurrent/relapsed tumors and to proper choice of beneficial treatment options, including molecularly targeted therapies. In order to obtain the genomic profiles, blood-based tests, so called ‘liquid biopsies’, are considered to be a more useful method as compared to tumor biopsies, since liquid biopsies can be performed repeatedly and less invasively during a monitoring period and can provide the genomic information that is highly concordant with that of tumor biopsies. Hence, by leveraging the genomic profiles obtained by liquid biopsies, recurrence/relapse can be detected earlier than the current imaging diagnosis, and more suitable therapies can be provided without the delay in the time course of the treatment. Furthermore, analyzing the comprehensive genomic information, which also can be supplemented by liquid biopsies, will lead to a new development of effective immunotherapy related to mutations and/or neoantigens. In this review, we focus on potential roles of liquid biopsy in terms of clinical management of CRCs ranging from early detection of recurrence/relapse to acquisition of definitive clues leading to a promising and beneficial treatment, and touch on the potential of a promising immunotherapy in the treatment of CRCs (Figure 1). 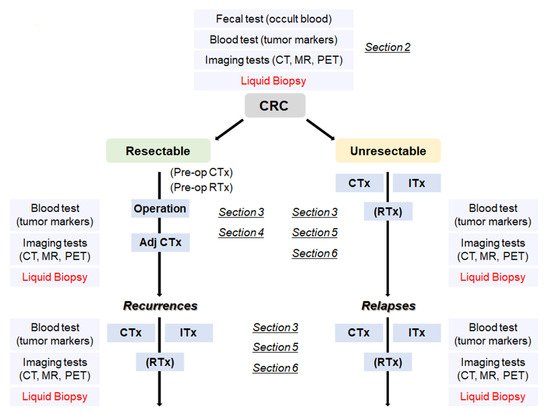 CRC is often diagnosed at a late stage owing to the lack of specific symptoms in early stages [1]. It is clinically important to develop an easy, cheap, and sensitive cancer screening method that detects cancer or precancerous lesions before clinical symptoms arise. If we can, we are able to begin treatment at earlier stages and increase probability of cure of the disease.
Colonoscopy screening remains the gold standard for early-stage diagnosis of CRC and has led to the reduction of CRC-related mortality [2][3]. Although colonoscopy is certainly effective, it is an invasive and relatively expensive procedure to screen CRC. Recent advancement of noninvasive screening approaches that were approved by the US Food and Drug Administration (FDA) includes stool-based tests and multitarget stool DNA tests (e.g., Cologuard) summarized in Table 1.
Table 1. Up-to-date stool- and blood-based screening method.
A follow-up diagnostic colonoscopy is performed if abnormalities are indicated by these noninvasive tests. Even though the existing noninvasive stool-based tests for colon cancer have shown high sensitivity and specificity, adherence remains low. An observational study from Germany indicated the improved compliance to CRC screening using these tests. In this study, 97% of the subjects who had refused colonoscopy accepted an alternative noninvasive method; 83% of them chose the blood test, only 15% chose the stool test, and the remaining people refused to receive any screenings [16].
To improve the low adherence of colonoscopy and stool-based tests, liquid biopsy approaches, which have progressed substantially, are likely to be suitable to apply for the screening of CRC using blood samples. In 2016, the FDA approved the first blood-based screening test, Epi proColon, that possibly detects the promoter methylation status of the septin 9 (SEPT9) gene in cell-free DNAs (cfDNAs) for colon cancer using qPCR. Methylated SEPT9 level is increased in CRC and thus serves as a differential biomarker for early detection of CRC. The Epi proColon assay showed sensitivity and specificity values ranging from 68 to 72% and 80 to 82%, respectively (Table 1) [17][18]. Importantly, results from the multicenter randomized ADMIT trial indicated that adherence of Epi proColon blood-based screening was 99.5% compared with 88.1% for the FIT stool-based test, demonstrating a preferential acceptance of the blood test [12].
In addition to methylation signatures, Cohen and colleagues reported a multianalyte detection systems (CancerSEEK) by combining the detection of specific mutations of circulating tumor DNA (ctDNA) with conventional biomarkers for the detection of eight common surgically resectable cancer types. The CancerSEEK approach detected cancer with a sensitivity range from 69% to 98% and a specificity of 99% [13]. Specifically, 65% (252/388) of stage I–III resectable CRC were positive with CancerSEEK [13]. A subsequent prospective interventional study, DETECT-A (Detecting cancers Earlier Through Elective mutation-based blood Collection and Testing) evaluated 10,006 women with no prior history of cancer and followed-up for 12 months with the combination of the CancerSEEK study and imaging. Among those participants, 127 of 134 had a positive blood test underwent PET–CT imaging examination to evaluate the presence or absence of as well as the location of cancer. A total of 26 women were diagnosed to have a cancer, and 65% of them were found to be at a localized stage, potentially amenable to surgical resection [19].
On the other hand, Guardant Health has initiated the ECLIPSE study (https://clinicaltrials.gov/ct2/show/NCT04136002, accessed on 26 April 2021) for early detection of CRC with the LUNAR-2 blood test. The LUNAR-2 assay could detect somatic variants, methylation alterations, and other epigenomic changes and reported a high sensitivity in detecting CRC. This assay will be further tested on approximately 10,000 individuals aged 45–84 who are at average risk for CRC.
GRAIL started the Circulating Cell-free Genome Atlas Study (CCGA) as a discovery study and found that whole-genome bisulfite sequencing (WGBS) interrogating genome-wide methylation patterns outperformed whole-genome sequencing (WGS) and targeted sequencing approaches interrogating copy-number variants (CNVs) and single-nucleotide variants (SNVs)/small insertions and deletions, respectively [20][21]. GRAIL established a high-specificity (low false positive rate) targeted bisulfite sequencing, which focused on more than 100,000 methylation sites in our genome and assessed methylation patterns to evaluate the presence or absence of cancer with machine learning. The results of CCGA and the STRIVE study reported a sensitivity of 67.3% for 12 cancer types at stages I to III with an accuracy of 93% to predict tissue of origin [14].
Cristiano et al. [15] developed a method called DELFI (DNA evaluation of fragments for early interception) for early cancer detection. This method utilized the differences of genome-wide cfDNA fragmentation profiles as well as machine learning to distinguish cancer patients from healthy individuals. DELFI detected 152 of 208 patients with eight cancer types including breast, CRC, lung cancer, ovarian cancer, pancreatic cancer, gastric cancer, and cholangiocarcinoma. The overall sensitivity and specificity were 73% and 98%, respectively and 81% and 95% for CRC, respectively. Furthermore, among the 126 patients who were evaluated by both targeted sequencing and DELFI, the sensitivity of DELFI alone was 66% (83 of the 126 patients), but when combining both tests, the sensitivity improved to 82% (103 of the 126 cases) [15].