Metabolites refer to the intermediate or end products of the metabolic pathways that are involved in cell growth, development, and survival [1][2]. The distinctive pattern of cancer metabolism was first described by the German physiologist Otto H. Warburg in the 1920s, who proposed that tumor cells exhibit remarkably high glucose consumption compared to non-malignant tissues [3][4]. Cancer cells prefer glucose consumption via aerobic glycolysis, which is 10–100 times faster than mitochondria respiration, and renders an overall benefit to cell proliferation [5]. This preference for aerobic glycolysis was later named the Warburg effect, which highlights the distinctive metabolic pathways in cancer cells [6].
The discovery of oncometabolites extends the understanding of the unique metabolic routes in cancer cells. Oncometabolites are abnormally accumulated metabolites that are involved in various critical aspects throughout cancer progression [7]. In contrast to adaptive metabolic reprogramming, the production of oncometabolites commonly results from genetic abnormalities in the genes encoding critical metabolic products. Succinate, fumarate, D-2-HG, and L-2-HG are considered oncometabolites [8].

2-hydroxyglutarate (2-HG) is a metabolite detected in urine that was first described by Karl Heinrich Ritthausen in 1868 [9]. In 1980, Chalmers and Duran identified two similar neurometabolic disorder types related to 2-HG, L-2-hydroxyglutaric aciduria (L-2-HGA) [10] and D-2-hydroxyglutaric aciduria (D-2-HGA) [11]. Mutations in L-2-hydroxyglutarate dehydrogenase and D-2-hydroxyglutarate dehydrogenase (D2HGDH) result in the manifestations of L-2-HGA and D-2-HGA, respectively [12]. Mutations in the mitochondrial citrate carrier SLC25A1 cause combined D-2- and L-2-HGA. Interestingly, the study pointed out half of the patients with D-2-HGA lack the D2HGDH mutation but instead carried mutations in IDH2 [13]. On the other hand, IDH mutations result in the biosynthesis of D-2-HG from α-ketoglutarate. As mentioned above, somatic mutations in IDH have been identified in glioma and other human malignancies through genome-wide mutation analysis [14][15]. To date, cancer-associated IDH1/2 mutations are commonly found in acute myeloid leukemia (~20%) [16], melanoma [17], cartilaginous tumors (56–70%) [18], cholangiocarcinoma (8.5–20%) [19], and WHO II/III gliomas (~80%) [20][21]. There are three IDH isoforms in mammalian cells: one cytosolic form (IDH1) and two mitochondrial forms (IDH2 and IDH3). IDH1 and IDH2 are homodimers, which consume nicotinamide adenine dinucleotide phosphate (NADP+) for their catalytic function. IDH3 is a heterotetramer and is a nicotinamide adenine dinucleotide (NAD+)-dependent enzyme. IDH1/2 functions as β-decarboxylating dehydrogenases, which can reversibly convert isocitrate to α-ketoglutarate (α-KG), an essential metabolic intermediate in the Krebs cycle that regulates metabolic and catalytic processes [22]. Heterozygous IDH1/2 mutations frequently occur in the arginine residues of the catalytic pockets IDH1 (R132H) and IDH2 (R140Q, R172K) [23][24]. These IDH1/2 mutations alter the organization of the catalytic centers in these enzymes, which establish gain-of-function changes in their catalytic function, as well as the production of D-2-HG (Figure 1) [23][25][26][27]. The chemical structure of D-2-HG is similar to α-KG. The only difference is the carbonyl group in the C2 position that is replaced by the hydroxyl group [28]. Therefore, D-2-HG could interfere with the enzymes that employ α-KG as a substrate, and competitively inhibit α-KGDDs by occupying the α-KG binding sites in the enzyme [29]. Moreover, α-KGDDs are a highly diversified enzyme family that is involved in many critical biological processes, such as DNA/histone demethylation, ubiquitination, and hydroxylation, and regulate epigenetic alternation, protein stability, and different signaling (e.g., HIF-1 and mTOR) [30][31]. 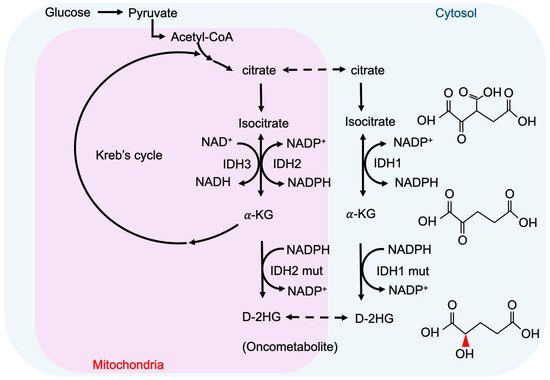 Figure 1. IDH mutations and production of D-2-HG. IDH1 and IDH2 are NADP+ dependent enzymes and distribute in the cytosol and mitochondria, respectively. IDH3 is a NAD+ dependent enzyme that locates in mitochondria. Mutations of IDH1 and IDH2 enzymes are sufficient to convert a-KG to D-2HG. NADP, nicotinamide adenine dinucleotide phosphate, NADPH, the reduced form of NADP.
Identifying IDH mutants and their subtypes is a common strategy for molecular pathology in glioma diagnosis. It mainly relies on immunohistochemistry, DNA sequencing, and measurements of intratumoral and circulating D-2-HG, which rely on mass spectrometry (MS)-based [32][33], enzymatic assay-based, and magnetic resonance (MR)-based methods [34]. To precisely detect the levels of D-2-HG in gliomas with an MS-based platform, several studies suggested collecting samples from patients’ cerebrospinal fluid instead of from serum, as CSF has higher D-2-HG concentrations and provides more specific results [35]. Furthermore, the MS-based method could not clearly distinguish L- and D-2HG, which requires the use of additional chiral derivatization to separate these enantiomers. Although the MS and assay-based methods provide relatively high sensitivity (~ μM), circulating samples must be collected invasively and the D-2-HG final concentration cannot directly reflect the actual tumor size and border. Several recent studies discovered that non-invasive diagnostic approaches, such as magnetic resonance (MR)-based imaging (MRI) [36] and spectroscopy (MRS) [37] could be used to predict IDH mutations by measuring D-2-HG in gliomas with mM level sensitivity. Magnetic resonance spectroscopic imaging (MRSI) integrates the information of MRS and MRI, which can detect and quantify various metabolites, and generate the metabolite map from multiple lesions within the brain [38], which adds value to conventional MRI in pre-operation planning and post-treatment monitoring. MRS-based methods provide 88.6% accuracy in identifying the IDH mutational status, with 89.5% sensitivity and 81.3% specificity, suggesting that MR-based techniques are safe and promising approaches to support glioma diagnosis [39].

High concentrations of D-2-HG are needed to competitively bind to various α-KGDDs [40], which include a vast spectrum of demethylases, such as ten-eleven translocation enzymes (TETs) [29], the Jumonji (JmjC) domain-containing lysine-specific histone demethylases (JmjC-KDMs) [41], and fat mass and obesity-associated protein (FTO) [42] (Figure 2). D-2-HG-induced DNA and histone hypermethylation have led to the aberrant expression of oncogenes and tumor suppressor genes and play a key role in malignant transformation of IDH-mutated cancers [43][44]. In addition, a high concentration of D-2-HG inhibits the demethylase function of FTO, which decreases the stability of transcripts, and results in the suppression of relevant pathways [42]. 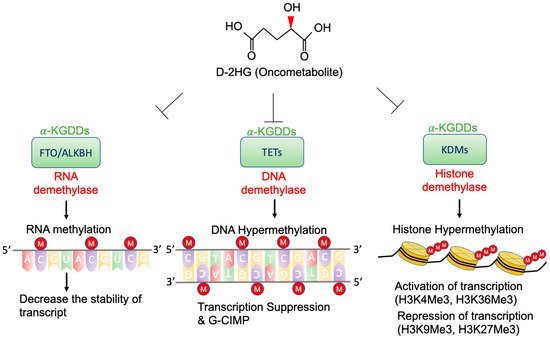 Figure 2. Epigenetic alterations of D-2-HG. D-2-HG alters the methylation status of DNA, RNA, and histone to regulate gene expression, and RNA stability via inhibition of various types of α-KDGG.

DNA methylation is considered as a gene repressive mark. The levels and patterns of DNA methylation are regulated by DNA methyltransferases (DNMT) and TETs [45]. The TET family contains three members (TET1, 2, and 3) [46], and the primary function is to catalyze the conversion of 5-methylcytosine (5-mC) to 5-hydroxymethylcytosine (5-hmC), further to 5-fluorocytosine (5-fC), and 5-carboxylcytosine (5-caC) [47]. The 5-caC is eventually decarboxylated by thymine-DNA glycosylase (TDG) and converted to cytosine. TET-mediated demethylation plays a critical role in regulation of gene expression [48], DNA base excision repair [49], and chromosome replication [50]. Experimental evidence shows that expression of IDH1mut R132H or IDH2mut R172K inhibits TET1/2 activity and decreases the level of 5-hmC [38]. Deficiency of TET2 catalytic function could lead to oncogenesis, through global hypermethylation and further enhanced cellular proliferation [51]. Although loss-of-function mutations of TET1/2 are less frequently found in glioma [52], the presence of D-2-HG in IDH mutated cancer is sufficient to block the activity of TETs, which results in genome-wide DNA hypermethylation [29][53][54]. Two major types of hypermethylation have been described: gene-specific hypermethylation in the cytosine-phosphate-guanine (CpG) island of the promoter area, and widespread (non-promoter) hypermethylation [55][56]. Hypermethylation in tumor suppressor genes has been reported to correlate to cell malignant transformation and tumorigenesis [57]. Several lines of evidence indicate that IDH-mutated gliomas exhibit a distinctive CpG islands methylation phenotype (CIMP) [58][59] through remodeling the methylome and is sufficient to change the epigenome, and further alter the transcriptional programs and the differentiation state [60]. Therefore, glioma CIMP (G-CIMP) could be used as a classification standard and diagnosis indicator. Based on the clinical observations, G-CIMP positive patients are relatively younger [58] and have more favorable outcomes than G-CIMP-patients [61]. However, not all the IDH-mutant/G-CIMP glioma patients exhibit a consistent prognosis [43]. Noushmehr et al. further categorized G-CIMP into two subgroups based on the methylation level: IDH mutant / G-CIMP-high and IDH mutant / G-CIMP-low [58], which could be considered as a novel epigenetic signature, independent of genomic and histopathologic classification criteria, to refine the diagnosis [61]. In high-grade glioma, IDH mutant / G-CIMP-high patients show more extended overall survival and favorable prognosis than IDH mutant / G-CIMP-low [60].

Hypoxia-inducible factors (HIFs) are critical transcription factors that are sensitive to oxygen concentration. HIF is a heterodimer composed of the constitutively expressed HIF-1β subunit and the oxygen-regulated HIF-1α subunit [74]. Several pioneering studies have revealed the role of HIFs in critical cancer hallmarks such as oncogenesis, metabolism, and therapy resistance [67][75]. Overexpression of HIF-α has been identified in various malignancies [76], which regulates apoptosis, tumor angiogenesis, and cellular proliferation [77]. The expression level of HIF-1α is significantly associated with poor survival in patients with high-grade (III+IV) gliomas [78]. The function of HIFs is mainly regulated by their post-translational modifications. Under normoxic conditions, HIF-α is hydroxylated by prolyl hydroxylases (prolyl hydroxylases domain proteins, PHDs) and asparaginyl hydroxylase (factor inhibiting HIF, FIHs), which guide the HIF-α protein to von Hippel-Lindau (VHL) mediated proteolysis [79]. Both PHDs and FIHs are α-KGDDs, which can be affected by the presence of D-2-HG. In IDH1/2mut glioma cell lines, Zhao et al. described that a high concentration of D-2-HG suppresses the activity of PHDs and FIHs, which reduces HIF-1α degradation, and increases HIF-1-dependent transcription [80]. However, their study results were in contrast with the findings by Koivunen et al. which indicated that D-2-HG either links to activation of PHDs [81], or is insufficient to affect HIF-1 [82]. Sun et al. also demonstrated that in the IDH1 knock-in mice model, U87 glioma cell line, and clinical databases, angiogenesis-related factors, including ANGPT1, PDGFB, and VEGFA, were downregulated in the IDH-mutated gliomas group, and promoter regions were also highly hyper-methylated [83]. The contradictory evidence suggests that the molecular mechanism could be complicated regarding how D-2-HG impacts the hypoxia-sensing pathway. Further research is encouraged to further dissect the relationship between D-2-HG and the hypoxia-sensing pathways.

The mammalian target of rapamycin (mTOR) is a serine/threonine kinase belonging to the phosphatidylinositol 3-kinase-related kinase (PI3K) family and serves as a core protein in the mTOR complex1 (mTORC1) and the mTOR complex2 (mTORC2). mTOR is mainly activated by extracellular activators, such as insulin-like growth factor 1 (IGF1), vascular endothelial growth factor (VEGF), and epidermal growth factor receptor (EGFR). mTORC1 and mTORC2 regulate different cellular processes and play important roles in cancer cell proliferation, migration, and survival [84][85][86][87].
The mTOR pathway could be activated via D-2-HG blockade of KDM4A [88]. In addition to histone demethylation, KDM4A mediates the demethylation process of cytosolic proteins, which may affect their function and stability. The DEP domain-containing mTOR-interacting protein (DEPTOR) is an endogenous negative regulator of the mTOR pathway and widely expressed in the human brain [89]. The loss of DEPTOR could activate mTOR downstream signaling [90]. KDM4A reduces the ubiquitination of DEPTOR by non-chromatin binding, catalytic activity to suppress β-transducin repeat-containing protein 1 (β-TrCP1) ubiquitin E3 ligase, and stabilization of DEPTOR [88][91]. The presence of D-2-HG in IDH1/2 mutated gliomas induced inhibition of KDM4A, which decreases the half-life and protein level of DEPTOR, and further enhances mTORC1/2 kinase activities [88]. The activated mTORC1/2 phosphorylates S6K1, Akt, and SGK1 to promote cell growth and survival [90]. Our previous study demonstrated an alternative mechanism of mTOR activation, the expression of Rictor upregulated in IDH-mutated glioma patients’ samples and cell lines, which enhanced the mTORC1/Rac1 downstream signaling and further increased the endocytosis [92].