Sulfated fucose-rich polysaccharides from marine organisms are unique molecules with various pharmacological effects. They might have promising therapeutic applications in different diseases.

Moreover, sea cucumbers possess another polysaccharide rich in sulfated fucose, denominated as fucosylated chondroitin sulfate (fucCS) [1]. This compound has a central chain similar to chondroitin sulfate from vertebrates, but it has branches of fucose linked to position 3 of glucuronic acid of the central core. The structure of these fucose branches varies between species. Figure 1 c shows the structure of this sulfated polysaccharide. Table 1 and Table 2 show the structural characteristics of fucoidans and fucCS cited in this manuscript. It is important to emphasize that fucoidans can show structural variation according to the source, extraction method and time of the year [2]. 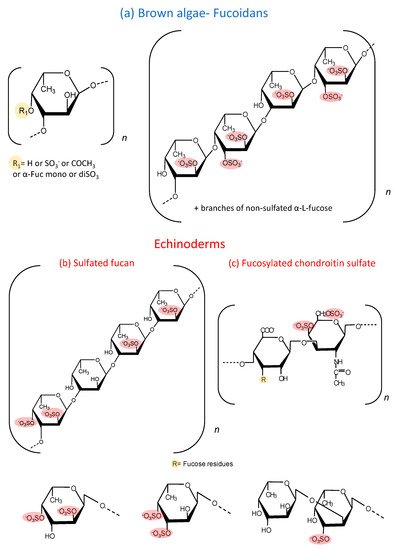 Figure 1. Structure of the sulfated fucose-rich polysaccharides from brown algae and echinoderms. (a) Fucoidans from brown algae are composed of α (1→3)-linked fucose units or alternating α (1→3)- and α (1→4)-linked fucose units. Mannose, galactose, xylose, uronic acid and branches of other monosaccharides make this polysaccharide highly variable and with complex structures. (b) SFs from echinoderms are made up of a repetitive tetrasaccharide units, formed by α (1→3) units and with a regular sulfation pattern at positions 2 and 4. (c) Structure of a fucCS from sea cucumbers. This polysaccharide has a chondroitin sulfate-like backbone, with branches of α-fucose linked to position 3 of the β-glucuronic acid of the central core. These fucose branches varies among species. In the specie L. grisea, for example, three types of branches are observed: α-Fuc-2,4diSO4, α-Fuc-3,4diSO4 and disaccharides composed of α-Fuc1→2-α-Fuc-3SO4→. The sulfated fucose-rich polysaccharides from echinoderms have a more regular and repetitive structures compared with brown algae polysaccharides.
Table 1. Structural characteristics of fucoidans with pharmacological activities after oral administration.
ND: not determined.
Table 2. Structural characteristics of fucCS with pharmacological activities after oral administration.

These sulfated polysaccharides from echinoderms allowed a significant advance in the attempts to correlate structure and biological activities of these molecules, which is difficult to establish with fucoidans [16]. Many studies report the biological effects of the fucose-rich sulfated polysaccharides administered intravascularly, subcutaneously or intraperitoneally [17][18][19][20][21]. More recently, studies have emerged reporting several pharmacological effects of these polysaccharides after oral administration [14][22]. The observation that these compounds have a therapeutic effect after their oral administration is very significant since it opens the perspective of the use of these molecules for the development of new drugs. The oral route is more practical, comfortable and preferred by patients for long term treatments.

Structural characteristics of fucoidans with pharmacological activities after oral administration.

Cancer is a leading cause of death, along with cardiovascular diseases. The hallmark of cancer treatment has been conventional chemotherapy. Chemotherapeutic drugs target rapidly dividing cells, such as cancer cells; however, these drugs also target normal cells, such as intestinal epithelium, bone marrow and hair follicles. In an attempt to target only cancer cells, a new generation of anticancer drugs arises using specific monoclonal antibodies, small molecule inhibitors and immunotoxins [23]. However, side effects and emerging resistance are still an issue, which increase the demand for new compounds that could act as adjuvant therapy and/or increase efficacy [24]. Regarding this issue, some data in the literature explore the anticancer effect of sulfated polysaccharides after oral administration. Table 3 summarizes the major observations.

An example of the beneficial effect of these polysaccharides as anticancer drugs is the observation that oral doses of fucoidan from Fucus vesiculosus delayed tumor growth in a xenograft model and increased cytolytic activity of natural killer cells [25]. Athymic mice were pre-treated with fucoidan daily for 2 weeks and then a human acute promyelocytic leukemia cell line was injected subcutaneously. Significant antitumor activity was observed without any sign of toxicity. Tumor development was clearly slower in the oral fucoidan-treated mice than in the control group. An enhancement of the cytotoxic activity of splenic natural killer cells in mice that were orally treated with fucoidan was also observed, which could be in part responsible for its pharmacological effect. Interestingly, when fucoidan from the same specie were orally administered for 21 days, starting on the seventh day post-tumor implantation, significant reduction in tumor volume and tumor weight was observed when compared with the control group [26]. In vitro assays showed that fucoidan could induce G 0/G 1 cell cycle arrest and caspase-dependent apoptosis in diffuse large B-cell lymphoma culture. This indicates that oral fucoidan administration can inhibit tumor growth and development.

In another xenograft model using human prostate carcinoma cells, oral administration of fucoidan for 28 days significantly hindered the tumor growth and tumor vascular density, as indicated by hemoglobin quantification assay [28]. The mRNA expression level of CD31 and CD105, biomarkers of endothelium, also declined. Analysis of the protein expression and gene promoters related to angiogenesis showed that their levels were reduced after oral fucoidan treatment, suggesting that fucoidan hindered tumor growth by inhibiting the formation of new blood vessels.

The anticancer effect of fucoidan was also observed using the polysaccharide from brown alga Fucus evanescens using a xenograft model. Colon cancer cells were inoculated into athymic nude mice [5]. Oral treatment with fucoidan for 21 days inhibited tumor growth compared with the vehicle-treated group. The antitumor effect of fucoidan was associated with its inhibition of lymphokine-activated killer T-cell-originated protein kinase (TOPK), highly expressed in many cancers. Tissues from each group were analyzed for phosphorylation of TOPK downstream targets, and the expression of these markers was decreased after 20 days of oral fucoidan treatment. Additional in vitro assays showed that this fucoidan modulates EGF-induced neoplastic transformation of mouse epidermal cells in a concentration-dependent manner. This pathway is related to the machinery that controls fundamental cellular processes, such as growth, proliferation, differentiation, migration and apoptosis. The polysaccharide also binds and decreases TOPK kinase activity in vitro, although a high concentration is required for this effect. The antitumoral activity of the echinoderm polysaccharides has not been tested so far after oral administration. These well-defined structures may help to clarify the effect of sulfated polysaccharides on cancer cells.

Immunomodulatory drugs can act at different levels of the immune system. Therefore, different kinds of drugs have been developed that selectively either inhibit or intensify the specific populations of immune responsive cells, i.e., lymphocytes, macrophages, neutrophils, natural killer cells, and cytotoxic T lymphocytes. Immunomodulators affect the cells systems by producing soluble mediators such as cytokines. Therefore, the rational use of drugs with anti-inflammatory effects is necessary to avoid excessive inflammation triggered by external agents or autoimmune diseases and drugs with immunostimulatory effects to increase the immune response such as the production of specific antibodies. In this context, oral administration of sulfated fucose-rich polysaccharides has also shown some interesting effects. A summary of these effects is shown in Table 4 .

The impact of the molecular weight on the anti-inflammatory activity of sulfated fucan from the sea cucumber Acaudina molpadioides with varying degrees of polymerization was also reported [34]. The SF was tested on an animal model of intestinal mucositis after oral administration for 26 days. Histological analysis revealed that morphology of the intestinal mucosa of fucoidan-treated animals was similar to the healthy group and that this effect was more pronounced with the high-molecular-weight fractions. Interestingly, these fractions regulated Th1/Th2 immune balance processes by altering IFN-γ/IL-4 ratio, while the oral administration of intact fucoidan had no effect. Intact SF and the high-molecular-weight fractions enhanced IgA protein expression levels in intestinal mucosa and strengthened intestinal adaptive immunity. Another interesting aspect of this work was the analysis of plasma concentration achieved by the oral administration of the SF. The low-molecular-weight fractions achieved high plasma levels when compared with unfractioned polysaccharide; therefore, the absorption and bioavailability of SF are likely to depend on the molecular size of the polysaccharide.

Another approach investigated the anti-inflammatory effect of oral administration of fucCS from the sea cucumber I. badionotus for 7 days. In contrast with the highly heterogeneous fucoidan from brown algae, this polysaccharide has a regular repetitive structure containing mostly 2,4 disulfated fucose units, as shown in Figure 1 c. When tested on an experimental model of colitis induced by dextran sulfate, oral fucCS attenuated the body weight loss, expression of colonic TNF-α gene and colon shortening caused by experimental colitis. The authors proposed that this protective effect might be due to downregulation of NF-kB and downstream genes such as COX-2 and TNF-α and a benefic profile on gut microbiota [33].

This review summarizes the therapeutic effects achieved after oral administration of sulfated polysaccharides in a variety of pathological processes. These observations were obtained mainly using animal experimental models, although some preliminary data have already been reported in humans. These results are not limited to the therapeutic effect but also highlight the proposed molecular mechanisms involved in the pharmacological action of these polysaccharides. Further studies are necessary to further understand their pharmacokinetic and the modulating effect on the intestinal microbiota.

In the case of heparin, a paradigm of an anticoagulant drug with carbohydrate structure, the transition from intravenous to subcutaneous administration was associated with the development of low-molecular-weight heparin. This led to the development of new analytical methods to study its pharmacodynamics, resulting in the now widespread methods to determine the plasma concentration of heparins based on anti-FXa and anti-FIIa assays [35]. Likewise, there is a need to develop sensitive methods for the study of the pharmacokinetics/pharmacodynamics of fucose-rich polysaccharides after their oral administration.

A partially depolymerized fucCS, administered as a single oral dose of 50 mg/kg, was detected in plasma between 0.5 and 7.5 h using a chromatographic method. Only 0.1% of the dose was detected in the urine accumulated during 24 h [36]. It is very challenging to measure the plasma levels of these polysaccharides analytically because of the heterogeneous molecular weight, branched structure and similarity in monosaccharide composition to mammalian polysaccharides.

The classic mechanism of action proposed for the sulfated fucose-rich polysaccharides after oral administration is summarized in Figure 2 A. The polysaccharides are absorbed through the gastrointestinal tract, probably by endocytosis due to their high molecular weights [37], reach appropriate plasma concentration and exert their therapeutic action. Subsequently, the polysaccharides are distributed to different tissues, metabolized and excreted. Structural modifications might occur during these processes. 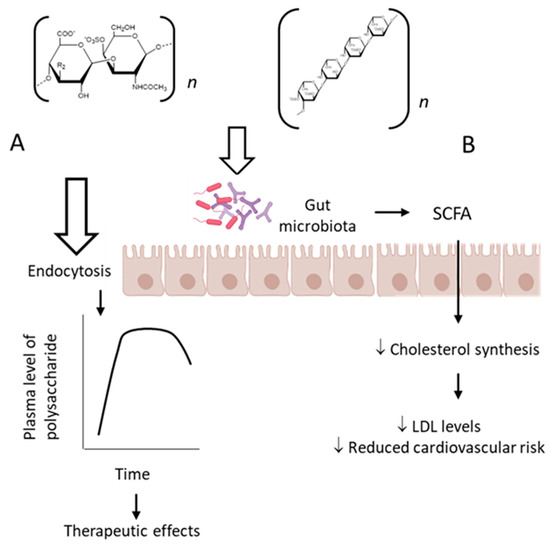 Figure 2. Pharmacological effects of sulfated polysaccharides after oral administration. (A) As the polysaccharides pass through the gastrointestinal tract, they are absorbed, probably by endocytosis due to their high-molecular-weight, and reach the bloodstream. Subsequently, they are distributed among various tissues and excreted unchanged and/or metabolized, as classically described for orally active drugs. (B) Alternatively, polysaccharides can exert a prebiotic effect by modulating the intestinal microbiota, which will produce short-chain fatty acids that can pass the intestinal mucosa by passive diffusion and reach the bloodstream, inhibiting cholesterol synthesis and reducing cardiovascular risk.