The pivotal role of childhood nutrition has always roused a growing interest from the scientific community. Plant extracts play a significant role in the maintenance of human health and wellness, with the potential to modulate risk factors and manage symptoms for a large number of common childhood disorders such as memory impairment, respiratory illnesses, gastrointestinal disorders, metabolic derangements, and pathologies related to the oral cavity.

The use of dietary supplements worldwide has increased in the last 30 years [1]. Dietary supplements are used in the age group ranging from birth to 18 years of age, by 31% of the population, to improve overall health (41%), maintain health (37%), supplement the diet (23%), prevent health problems (20%), and “boost immunity” (14%) [2]. From data by the World Health Organization (WHO), around 80% of the adult population in developing countries uses plant extracts for their health needs [3][4][5]. Plant extracts are also used for children, although their use must be regulated by the awareness that children differ from adults in terms of physical size, body composition, and physiology. Medicinal plants can be used to treat winter problems in a preventive context, and thus to strengthen the immune system and improve the body’s adaptation to seasonal disturbances, but they can also be used as a treatment for various symptomatic connotations. It is necessary to know how to regulate the use of such supplements according to a child’s body weight to avoid reaching toxic doses [6]. In a German study, 85% of children used one or more herbal supplement products [5]. Another study reported that 16% of Japanese pediatric surgical patients use herbal supplement products [7].

About 9% of newborns, from the first month of life, have been treated with herbal supplements, in particular, for mild neonatal ailments such as flatulence, teething, or colds. The extracts used are based on chamomile, mint, echinacea, fennel, catnip, and anise [8]. The belief that natural herbal products are safe, culturally significant, cheaper than some medical treatment options, and easily accessible, are some of the reasons why these products are being used [9].

Given that the correct use of food supplements is safe, it is important to rely on a trusted pediatrician in order to verify the existence of a real need to take supplements and subsequently to assess the correct dosage and identify the presence of any contraindications (some plant extracts/supplements cannot be used in children) both in situations of simple nutritional support and in conjunction with the intake of drugs for intercurrent or chronic pathological conditions.

A food supplement is a product intended to supplement the diet in particular conditions of deficiency. Children with correct and balanced eating styles rarely need supplements, except for particular cases in the first year of life or in the presence of certain disorders or diseases. During childhood, plant extracts are used to treat symptoms of upper respiratory tract infections, sleeping problems, gastrointestinal disorders, or occasional and common ailments such as cough, cold, and sore throat. Figure 1 summarizes common childhood pathologies and their defining features. 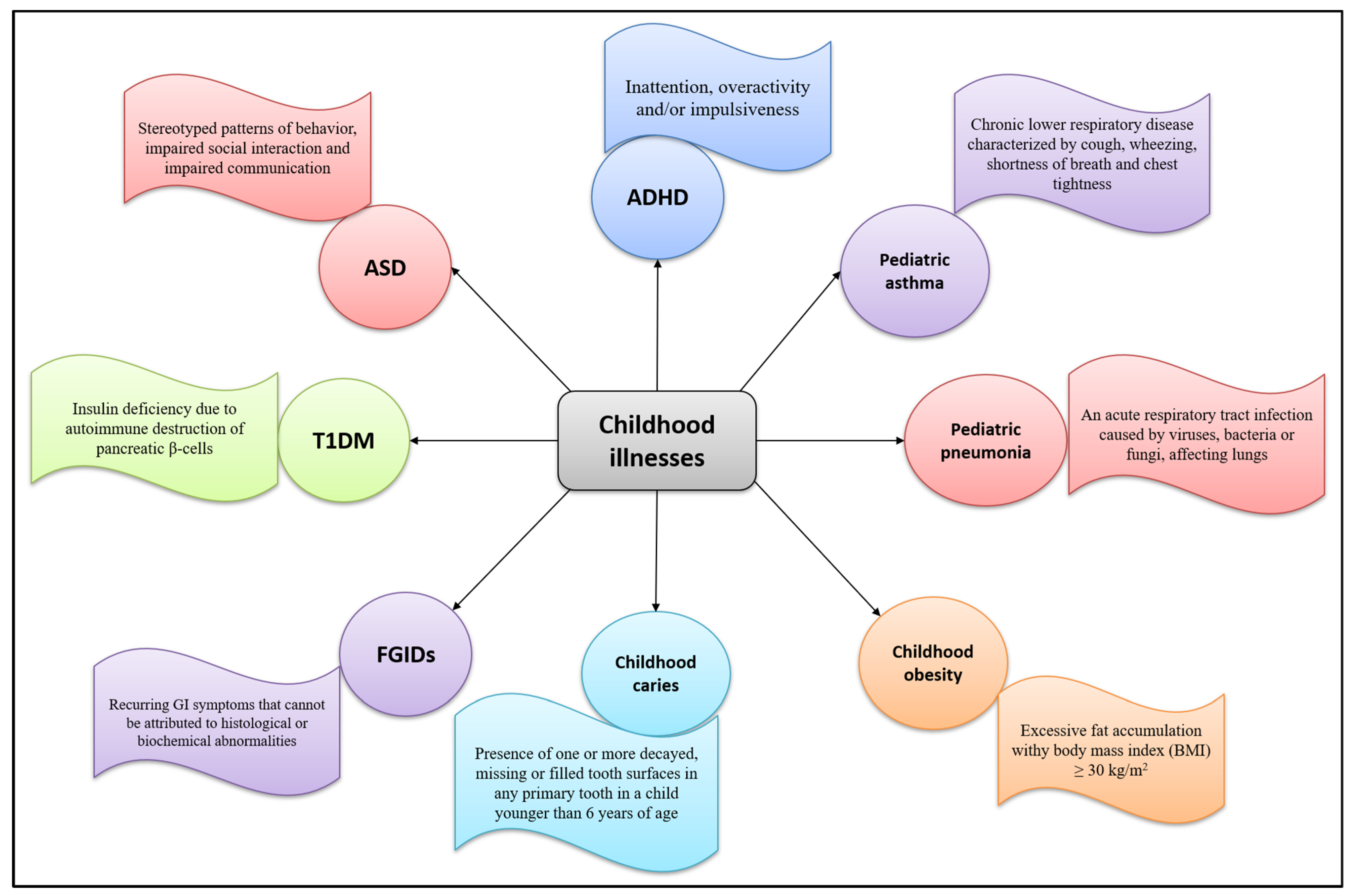 When compared to drugs, the current studies available on the safety of botanical extracts in childhood supplementation are limited, however, their use is more frequent for the treatment of minor ailments due to their perceived efficacy, safety, and often low cost. On the other hand, children are more prone to certain risks with dietary supplementation such as incorrect dosing, side effects, drug–supplement interactions, and allergic reactions [24][25]. The quality of supplements and lack of standardization are obstacles in making recommendations for the use of botanical extracts and bioactive food components for the prevention or management of symptoms of mild ailments in children and adolescents. Mislabeling, misidentification, adulteration with other herbs or pharmaceuticals, and contamination with heavy metals, herbicides, and pesticides could lead to serious adverse events in pediatrics [26]. A recent study conducted by Saper and colleagues showed that about 20% of herbal products were contaminated with heavy metals including lead, mercury, and arsenic, where 50% of those products were marketed for use in childhood supplementation [27].
There is always a risk of drug–supplement interactions, as parents do not report the use of supplements to the primary healthcare professional of their children. A survey report showed that only 45% of parents report the use of botanical supplements to the primary healthcare provider of children [24]. For instance, M. chamomilla is a potential vehicle of Clostridium botulinum spores and thus ingestion of chamomile tea could be a possible risk for infant botulism [28]. A 13-old boy was diagnosed with hepatic failure, where liver biopsy showed more than 90% necrosis of hepatocytes, and the most likely cause identified was Euphytose (a formulation mixture of V. officinalis, Crataegus oxyacantha, Ballota nigra, P. incarnata, and Cola nitida) [29].

The supplementation of herbal products or bioactive components reported above in children is relatively safe, based on both their traditional use and the clinical trials, with no serious adverse event being reported. However, studies highlighting the safety issues of childhood supplementation are limited and above all, there are no studies specifically aimed at assessing safety in children. Thus, time is needed to expand the literature data covering both the efficacy and the safety of childhood supplementation with botanical extracts and bioactive food components, especially regarding the dosage, the adequate method of intake to avoid interaction with drugs, and other foods or food components.
Though no specific recommendation can be made at this point towards the use of childhood supplements, the use of botanical extracts and bioactive components alone or in combination with conventional therapies might be considered on an individual basis to manage various ailments.