Biofilm formation is an integral part of the microbial life cycle in nature. In food processing environments, bacterial transmissions occur primarily through raw or undercooked foods and by cross-contamination during unsanitary food preparation practices. Foodborne pathogens form biofilms as a survival strategy in various unfavorable environments, which also become a frequent source of recurrent contamination and outbreaks of foodborne illness.

Most microbes found in nature exist in biofilms, a well-structured, dynamic, diverse, synergistic and protective microbial community [1][2]. Biofilm formation (Figure 1) on a solid surface is a natural survival strategy of a microbial cell to compete efficiently with others for space and nutrients and to resist any unfavorable environmental conditions. The solid surface may be biotic (meat, produce, oral cavity, intestine, urogenital tract, skin, etc.) or abiotic (floors, walls, drains, equipment, or food-contacting surfaces). Microbes adhere to surfaces by producing an extracellular polymeric substance (EPS) forming a three-dimensional biofilm scaffold. Metaphorically, EPS is the “house” that covers and protects bacteria in biofilms [3]. Although biofilm architecture is solid, protecting bacteria from physical impact, most of the biofilm is still made up of water [4]. EPS makes up the majority of the total dry mass of biofilms. Approximately one-third of the biofilm’s dry weight is bacterial cells, and the remaining weight comes from bacteria-derived molecules, such as polysaccharides, proteins, and DNA, that make up the EPS [5][6]. Biofilms can be comprised of single-species or mixed-species cultures. The composition of bacteria in biofilms is also affected by surface materials, growth conditions, and biofilm maturity [7]. In the food processing environment, biofilm formation threatens food safety since pathogens can be directly transmitted through contact. After transmission, pathogens can also form biofilms on food surfaces. For instance, Listeria monocytogenes found on cantaloupe skin caused a multistate outbreak in 2011 [8][9]. 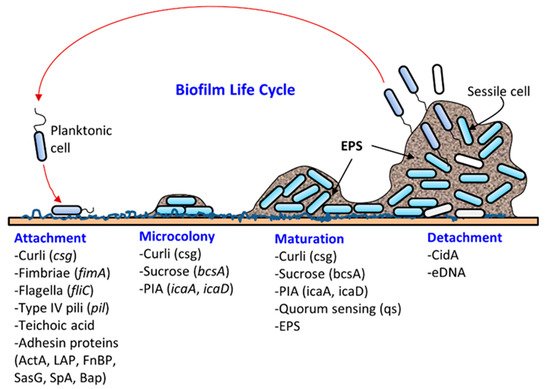 Microbial attachment and biofilm formation on solid surfaces provide the advantages of living in a protective scaffold against desiccation, antibiotics, or biocides (sanitizers), ultraviolet radiation, metallic cations, and physical impact from washing and cleaning. For instance, Martins et al. [11] recently showed that urinary tract infections caused by Staphylococcus saprophyticus were more resistant to several antibiotics in their biofilm status compared to their planktonic form. Likewise, biofilms of a commonly used model food spoilage bacterium Lactobacillus plantarum were more resistant to several biocides, including organic acids, ethanol, and sodium hypochlorite, than in its planktonic state [12]. Bacteria can acquire and/or exchange genetic materials in biofilms. DNA (plasmid) exchange can take place in biofilms through conjugation and transformation [13][14]. In addition, extracellular DNA can retain the electron shuttle molecule that is critical for redox cycling in biofilms [15].

Pathogen transmissions occur primarily through raw uncooked or undercooked foods and by cross-contamination during unsanitary food preparation practices. Pathogens find a harborage site or niche in food production facilities or product surfaces by forming biofilms [16]. These niches serve as a major source of foodborne outbreaks, especially in cafeterias, hospitals, cruise ships, and commercial food processing facilities. For example, the ubiquitous existence of L. monocytogenes in nature gives it numerous routes to be introduced in a food processing environment with various fresh produce or raw materials [17][18]. Once L. monocytogenes finds a niche in a food processing facility, it can attach to several abiotic surfaces, such as stainless steel, PVC, and polystyrene, and start to form biofilms, which can be resistant to sanitation and may lead to recurrent food contamination [19][20]. Repeated sampling of multiple food processing environments showed that similar L. monocytogenes strains can persist for a few months and up to 12 years [21]. The persistence of certain L. monocytogenes isolates in the food processing environment may also be due to the same strains that were consistently introduced by raw materials, or because of ineffective sanitation practices [22][23].

2. Bacterial Virulence Factors that Contribute to Biofilm Formation and Pathogenesis

Biofilm formation occurs in several stages: (i) attachment, (ii) microcolony formation, (iii) maturation with cellular differentiation, and (iv) detachment or dispersion ( Figure 1 ). In biofilms, microorganisms produce fimbriae, curli, flagella, adhesion proteins, and capsules to firmly attach to a surface [1][6]. Cells grow in close proximity and cell-to-cell communication (quorum sensing, QS) occurs through the production of autoinducers such as N-acyl homoserine lactone (AI-1) or other molecules, which also regulate gene expression for survival, growth, cell density, resistance to antimicrobials, tolerance to desiccation and pathogenesis [24][25]. Understanding the mechanism of quorum sensing in biofilm formation provides an opportunity for the application of appropriate QS inhibitors to control infection and pathogenesis [26][27][28][29][30]. As a microcolony continues to grow, cells accumulate forming a mature biofilm with three-dimensional scaffolding. Loose cells are then sloughed off from a mature biofilm and convert into planktonic cells, which start the life cycle of a biofilm again by attaching to new biotic and/or abiotic surfaces. The cells from biofilms could become a continuous source of food contamination [10]. Virulence factors that are involved in both biofilm formation and pathogenesis are discussed below for L. monocytogenes, Staphylococcus aureus, Escherichia coli, Salmonella enterica, and Pseudomonas aeruginosa.

Listeria adhesion protein (LAP), an adhesion protein [31], has been indirectly attributed to the formation of biofilm ( Table 1 ). Our group has recently shown that recombinant Lactobacillus casei expressing LAP from L. monocytogenes or L. innocua on the bacterial surface showed aggregation and increased biofilm formation on a microtiter plate [32]. In a mouse model, these bioengineered strains also formed thicker biofilms on colonic villi than wild-type Lactobacillus casei ( Figure 2 ). Although the function of LAP in the pathogenesis of L. monocytogenes has been well documented [33][34], results from recombinant Lactobacillus casei highlights the role of LAP in biofilm formation as well. 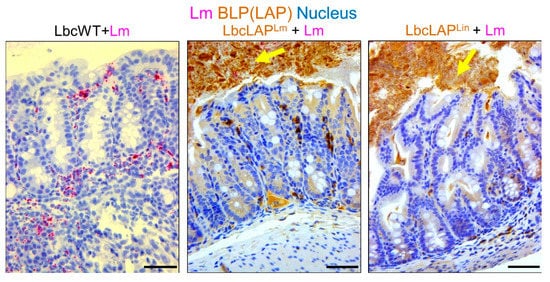 As one of the pathogens causing the most gastroenteritis cases around the world, E. coli is a model bacterium that forms biofilm after well-programmed production of various extracellular molecules [63]. Curli and cellulose are two major components making up the extracellular matrix [52].

In addition, in mixed-culture biofilms of P. aeruginosa and S. aureus, the presence of the latter organism can also increase exotoxin A expression [64][65], indicating that expression of virulence genes by one species in biofilms can be altered by the presence of another species.

Although the pathogenesis of multiple foodborne pathogens has been comprehensively studied, most of the results were generated using planktonic cultures under laboratory conditions. The actual risk of consuming pathogens from biofilms should be further characterized using animal models instead of only in vitro cultured mammalian cell models or virulence factor expression analyses. Recently, we used L. monocytogenes as a model foodborne pathogen to investigate the virulence of the bacteria in biofilms. Our data indicate that the virulence of biofilm-isolated L. monocytogenes was upregulated after 48 h bacterial adaption to the intestinal environment. These findings enhanced our understanding of bacterial pathogenesis of biofilm-isolated bacteria, and these data should be beneficial for the accurate evaluation of biofilm risks in food processing environments. Similarly, the assessment of the pathogenicity of other foodborne pathogens, such as E. coli and Salmonella, isolated from biofilms could also be further investigated using animal models. Using bacteria isolated from biofilms could also be a good model for studying bacteria switching from a saprophytic lifestyle to pathogenic status in animal hosts.

Although there are many studies of biofilm formation on plastic, stainless steel, or glass surfaces, more in-depth studies are needed of foodborne pathogen biofilms formed directly on food surfaces, for example, cantaloupe skin or eggshell. Bacteria isolated from these biofilms should represent a more realistic model to assess the risk of consuming foodborne pathogens found on food surfaces.