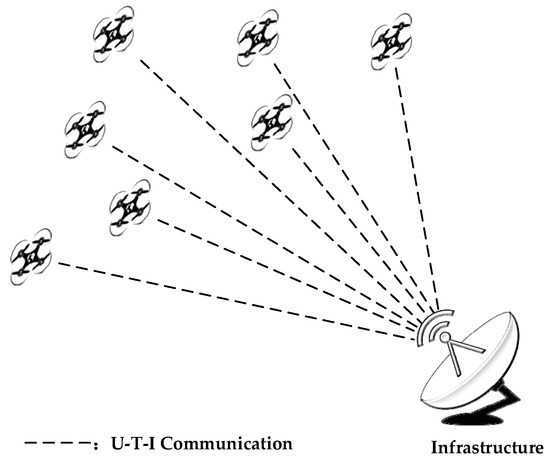 However, the connection between UAVs requires infrastructure for transmission. The U-T-I distance is much greater than the U-T-U distance, which causes longer delays. In addition, considering the high mobility of UAVs and the coverage requirements of swarm applications, this architecture is obviously not stable. The infrastructure as a central node also causes the entire communication network to be paralyzed once the ground station or satellite breaks down or is attacked. Therefore, centralized communication architecture has the disadvantage of Single Point of Failure (SPOF). As a result, centralized communication architecture can be regarded as unreliable.

Because UVAs operate at high speeds and missions may cover large areas, UAVs frequently connect and disconnect to the network. As a result, UAV swarm ad hoc networks are considered the best choice. Under decentralized communication architecture, UAVs conduct real-time interactive communication in an ad hoc manner, thereby eliminating dependence on the infrastructure and eliminating the communication range restrictions [3].

In a “single-group swarm Ad hoc network” (Figure 2), an internal communication of the swarm does not depend on the infrastructure. The communication between the swarm and the infrastructure is a single point link relying on a specific UAV called gateway UAV. In this system, other UAVs are relay nodes that forward data within the swarm. Using this method, UAVs in the swarm can share situation information in real time to optimize collaborative control and improve efficiency. Similarly, mutual communication between the gateway UAV and infrastructure also enables the upload and download of swarm information, including instructional information. With regard to the gateway UAV, two additional types of transceivers are necessary: one for communicating with other UAVs at low power and short distances and the other for communication with infrastructure at high power and long reach. As a result, other UAVs in the swarm only need to carry low-cost and lightweight short-reach transceivers. This not only greatly extends the communication range of the network to allow for large coverage requirements, but also makes small UAVs with smaller payloads more useful [4]. However, in order to guarantee the consistent connectivity of the swarm, “single-group swarm Ad hoc network” architecture requires that the flight patterns (speed and heading orientations) of all UAVs in the swarm must be alike. Therefore, a group of small size UAVs is appropriate for scenarios that utilize communication architecture. One example of a “single-group swarm Ad hoc network” is the UAV cloudlet layer in Disaster Resilient three-layered architecture for Public Safety Long-Term Evolution (DR-PSLTE) [5]. 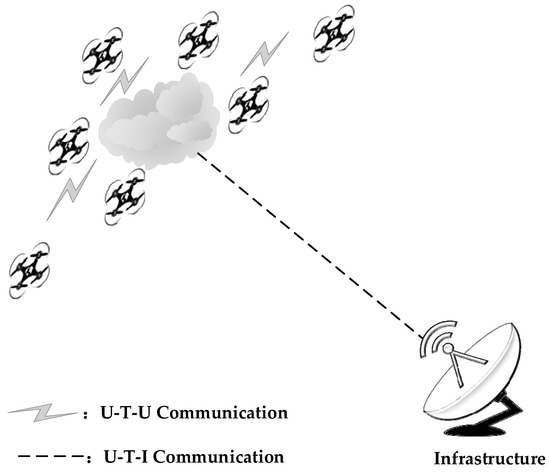 Meshed architecture is a combination of ring and star architectures and has the advantages of both systems (Figure 3c). All the UAV nodes in the swarm have the same capabilities, with both terminal nodes and routing functions. The information stream from one node to another can be implemented in different forms, and any UAV can act as a gateway node for the swarm. Meshed architecture has now become the standard for intra-swarm communication systems.

However, the diversification of missions results in higher demands on the composition of the UAV in a swarm. Practical applications often require the swarm to utilize not only small UAVs, but also medium and large UAVs. Therefore, the aforementioned “single-group swarm Ad hoc network” architecture obviously does not meet these needs. While similar UAVs can often fly close in proximity, different types of UAVs can be far away from each other. Therefore, the UAVs in the swarm are divided into different groups, with similar UAVs located within the same proximity. These are known as “multi-group swarm Ad hoc network” and “multi-layer swarm Ad hoc network” architectures, as described below.

When discussing the advantages and disadvantages of the UAV swarm communication architectures, we often focus on the requirements of high coverage and maintaining connectivity. High coverage plays an important role in gathering intelligence and analyzing situations. Only by maintaining connectivity can the real-time communication of the swarm be guaranteed. However, UAV swarms often perform tasks in unknown environments, and the appearance of threats and obstacles is random in time and space. Therefore, it is essential that members withdraw or rejoin. This leads to the impossibility for a disruption-free connectivity. This mainly depends on signal attenuation due to propagation loss. To achieve an uninterrupted connection, on the one hand, the distance in the UAV swarm ad hoc network configuration should not exceed the sensitivity of the receiver, and must be limited to the minimum signal-to-noise ratio (SNR) or receive signal strength indicators (RSSI) range, respectively Inside [7]. On the other hand, the wisdom of bird flocks and fish schools in nature is worth learning from. UAVs in a swarm should be able to react cognitively to changes of the environment to adapt their movement to positions with channel characteristics. This is undoubtedly beneficial for achieving uninterrupted connections. In addition, existing researchers have used the high-efficiency bandwidth of 4G wireless networks to improve the connection stability of UAV swarm in wide coverage areas [9]. The emerging 5G wireless network will provide higher technical support for these studies.