Corema album (L.) D. Don is a dioecious perennial shrub of the Ericaceae family, endemic of the Iberian Peninsula Atlantic coastal dunes. It is a branched bush, that can reach up to 1 m, with a spherical (5–8 mm diameter) and white acidic edible berries (Portuguese white crowberries, Atlantic pearls, beachberries or “camarinhas” in Portuguese).

The Portuguese coastline is rich in many indigenous maritime plants with a high potential to become novel functional food ingredients (or sources of these). Corema album (L.) D. Don is a dioecious perennial shrub of the Ericaceae family, endemic of the Iberian Peninsula Atlantic coastal dunes. It is a branched bush, that can reach up to 1 m, with white acidic edible berries (Portuguese white crowberries or “camarinhas” in Portuguese), 5–8 mm in diameter [1]. The genus Corema was included in the Ericaceae family in 1959 since traditionally it belonged to the Empetraceae family, which comprises two more genus—Empetrum and Ceratiola. The two species of Corema genus, C. conradii Torrey and C. album (L.) D. Don ex Steudel, can be found in Atlantic coastlines—C. conradii in the eastern coast of North America and C. album in the Iberian Peninsula and in the Azores islands (subsp. azoricum Pinto da Silva) [2].
C. album berries are known to be exceptional sources of nutrients and phytochemicals. Their dietary intake is highly recommended since it is associated with the prevention of chronic and degenerative diseases [3]. The nutraceutical potential of berries is due to their phytochemical composition. High levels of phenolic compounds have been identified, particularly phenolic acids (benzoic and caffeic acids being the most predominant), flavonols (especially quercetin 3-O-hexoside and rutin), anthocyanins (delphinidin 3-O-hexoside, cyanidin 3-O-glucoside, and cyanidin 3-O-pentoside), and tannins [4][5][6]. This confers them beneficial biological properties, namely antioxidant, antimicrobial, and anticancer activities, rendering them promising chemopreventive agents against anti-inflammatory and anti-neurodegenerative disorders, as well as cancer [7][8]. The berries have also been described as a valuable source of fibers, water, and sugars [9].
The human consumption of C. album berries dates back to ancient times, having been used in traditional medicine as antipyretic [10] and antiparasitic agents [11]. Since they are not yet approved as novel food products—having not entered into the regular market—these types of berries are not consumed by the general population [12]. However, they have been sold in Portuguese local markets, in the regions where Corema exists. Even though this plant has gained the attention of the scientific community in the last few years, the number of published studies, at the molecular level, concerning the biological potential of C. album berries and their nutritional value is still scarce, e.g., less than 10 papers, using Science Direct and Scopus digital databases by searching for specific keywords within the title (“Corema album”) and (“antioxidant”) in abstract. A thorough characterization of these berries is essential for understanding their activity, as well as to allow their safe consumption either as fresh fruits or processed in the form of juices, jams, or jellies. Martin et al. (2020) reported the first spectroscopic study of fresh C. album berries, assigning distinct vibrational fingerprints to the skin and the seeds that revealed the differences in their content in phenolic derivatives, unsaturated fatty acids, and waxy polymers [13].
Since the evaluation of the biological properties of the different parts of C. album berries, as well as their spectroscopic characterization, is still scarce, the present study aims at filling this gap, particularly for extracts from fresh pulp, seed residue, and seed oil. Actually, only two studies are found in the literature for C. album pulp and seed [4][14], with a small number of antioxidant activity tests, without any vibrational spectroscopic characterization, and with no separation between the seed residue and the seed oil. Solvent extraction with methanol was the method of choice since this combination is routinely used for phytochemicals extraction with good yields [15]. Currently, antioxidant activity was measured for isolated extracts from the pulp (also tested for antimicrobial activity), seed residue, and seed oil, and the results were related to the main chemical constituents determined by both Fourier transform infrared (FTIR) and Raman vibrational spectroscopies. Apart from probing its separated constituents, the establishment of a relationship between composition and health beneficial effects is innovative for this edible fruit.

The BSR extract presents a higher radical scavenging ability both against the DPPH radical and the ABTS radical cation (Table 2), followed by the FBP extract and by the BSO, which presents the lowest antioxidant activity. Noteworthy is the EC50 value for the BSR in the DPPH assay, which is in the same range as the EC50 calculated for BHT. Moreover, only the BSR extract presents the capability to inhibit lipid peroxidation, though to a lower extent than the standard antioxidant BHT.
Table 2. Free radical scavenging activity (DPPH and ABTS) and inhibition of lipid peroxidation of pulp and seed extracts of C. album berries presented as EC50 values (mg/mL).
FBP, fresh berries pulp; BSR, berries seed residue; BSO, berries seed oil. BHT—reference antioxidant. Values represent the mean ± standard deviation of three independent experiments. For the same column, different superscript letters indicate significant differences (Tukey’s post hoc test, p < 0.05).
In the β-carotene–linoleic acid bleaching assay, the BSR extract presents a higher inhibition of the β-carotene oxidation than the other extracts (Figure 1). Nevertheless, it is still considerably less active than BHT (EC50 = 0.005 ± 0.002 mg/mL). The BSO extract showed a higher level of β-carotene oxidation inhibition when compared to the FBP extract. 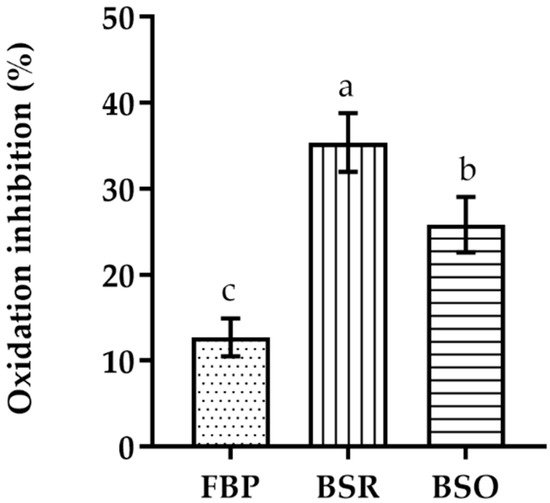 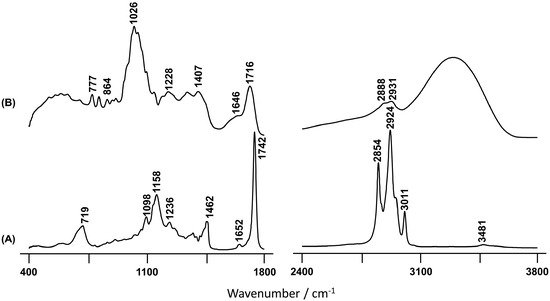 Figure 2. FTIR-ATR spectra of the BSO (A) and FBP (B) C. album berry extracts.
Regarding the infrared spectrum of the FBP extract (Figure 2B), the results reflect a high content of hydroxylic components, namely phenolic acids. This is clearly evidenced by the broad and intense band centered at 3303 cm−1 and ascribed to the stretching mode from the ring hydroxyls. Additionally, the signal at 777 cm−1 is characteristic of out-of-plane (C-C-H) deformation modes of the aromatic ring [44]. This type of compound seems to be absent in the oil extract, as evidenced by the total absence of vibrational bands in the high wavenumber spectral region (Figure 2A). It should be highlighted that the spectrum of the seeds revealed the presence of a significant amount of hydroxylic compounds, as well as water [13], which were most likely removed during the oil extraction process. The broad infrared signal at 1026 cm−1, which is absent in BSO, is due to the ν(C-O) and ν(C-C) modes from polysaccharides and pectins, that are widely present in these types of samples [50][51][52][53]. As expected, it is more likely to find sugars in the fresh pulp in comparison with the oleaginous seed part, which is clearly evidenced when BSO and FBP spectra are compared (Figure 2).
The BSR fraction still contains a significant amount of esterified fatty acids, as evidenced by the infrared spectral features at 3014 and 1742 cm−1 (Figure 3). However, probably the most remarkable characteristic, in contrast to BSO (Figure 2A) is that the infrared profile of BSR shows several features indicative of significant amounts of phenolic compounds, namely three very distinctive bands at 1443, 1515 cm−1, and 1607 cm−1. The first two are ascribed to ring ν(C-C) conjugated with (C=C), while the last one is assigned to ν(C-C)aromatic [54][55][56]. Furthermore, the presence of more carotenoids in BSR relative to the other extracts, detected by Raman (Figure S1), may contribute to the high antioxidant activity currently determined for this sample. Although Raman spectroscopy does not allow an accurate carotenoid quantification in the samples, it does enable us to determine, in a semi-quantitative manner, in which sample this polyene is present on the highest content. This was carried out by comparing the peak ratio I1528/I1448 [13], which reaches a value higher than 1 for BSR, being below unity in the case of BSO. These observations are in good accordance with the higher antioxidant potential determined for the BSR extract relative to the one obtained for BSO.

Figure 3. FTIR-ATR spectrum of the BSR C. album berry extract.
In the present study, the spectroscopic characterization of the extracts by FTIR-ATR and Raman allowed the detection of fatty acids in the BSO and BSR, and of phenolic compounds in FBP and BSR. The FBP extract was also found to contain sugars, triterpenoids, and polysaccharides. In addition, the presence of glycosidic linkages may also indicate that most of the phenolic acids are conjugated to sugar moieties. In fact, these chemical characteristics evidence the complexity of the sugar polymers present in the sample [57][58].
Finally, it may be interesting to compare the presently obtained results with those from studies previously performed by other authors on C. album. In particular, León-González et al. [7] analyzed the phenolic content of the berries using different extraction methodologies. A large number of phenolic acids was identified by these authors (by HPLC and MS), in some cases reaching ca. 2260 mg per kg of extract [5]. Despite the fact that the solvents were different from the ones used in the current study, the main extracted compounds were found to be the same.
Since C. album has been used by some ancient civilizations to eliminate intestinal worms [1], the present study aimed to evaluate the antimicrobial activity of the FBP sample, since certain antibiotics are also used to treat intestinal parasites (e.g., metronidazole) [59]. Comparison of the current results with the few studies in the literature describing the evaluation of antimicrobial activity for plant extracts of the same taxonomic class allows us to conclude that the FBP extract of C. album displays promising antibacterial activity: a MIC = 17 mg/mL for extracts of Lythrum salicaria against Pseudomonas aeruginosa [60] relative to a MIC = 12.5 mg/mL (Table 4), and the lowest activity of Tamarix gallica extracts observed against Escherichia coli using disk diffusion method [61], relative to a MIC = 6.25 mg/mL (Table 4), which contrasts with the lack of antibacterial activity obtained for acetone/water extracts of C. album pulp testing lower concentrations and using the disk diffusion method [14]. The inhibitory effect mechanism of FBP against the several strains currently tested is not known, however, based on some known compounds that may be present namely hydroxycinnamic acids, vanillic acid, and quercetin [5], could be related to their antioxidant mechanisms. Studies on the antimicrobial activity of these phenolic compounds and isolated flavonoids, showed significant antimicrobial activity against E. coli, P. aeruginosa, K. pneumoniae, and S. aureus, among others [62]. The recognized inhibitory effect of phenolic compounds towards bacterial growth can be explained by their ability to increase the cell membrane permeability, this effect varying for different bacterial strains due to differences in their structure and lipophilic character [63]. It may also be due to their ability to adsorb to cell membranes, interact with enzymes and other biological substrates, sequester metal ions that, in general, affect the normal cellular function [62]. In future work, it will be relevant to understand which components within the FBP extract are responsible for the measured antimicrobial effect and how they can lead to cellular damage in different types of microorganisms.
Table 4. Minimum inhibitory activity (MIC) of the FBP extract against bacterial strains.