Inflammation has been reported to be intimately linked to the development or worsening of several non-infectious diseases. A number of chronic conditions such as cancer, diabetes, cardiovascular disorders, autoimmune diseases, and neurodegenerative disorders emerge as a result of tissue injury and genomic changes induced by constant low-grade inflammation in and around the affected tissue or organ. The existing therapies for most of these chronic conditions sometimes leave more debilitating effects than the disease itself, warranting the advent of safer, less toxic, and more cost-effective therapeutic alternatives for the patients. For centuries, flavonoids and their preparations have been used to treat various human illnesses, and their continual use has persevered throughout the ages.

1. Role of Apigenin as an Anti-Inflammatory Agent

As the health effects of polyphenols depend on intake and bioavailability, the biological activities of apigenin (4’,5,7-trihydroxyflavone), an abundantly occurring flavone have, been extensively studied [1][2]. Much like the family to which it belongs, apigenin possesses a wide array of biological properties including anti-oxidant, anti-cancer, and anti-inflammatory actions [3][4][5]. As a result, apigenin has gained a lot of interest in the past few years as a potential therapeutic agent to treat various diseases such as cancer, diabetes, cardiovascular, and neurological disorders [6] (Figure 1). 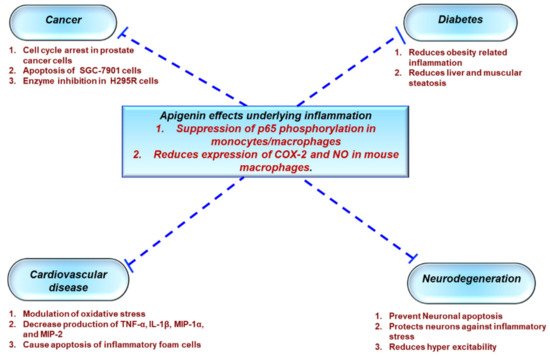 1.1. Protective Effects of Apigenin Across a Spectrum Of Chronic Diseases 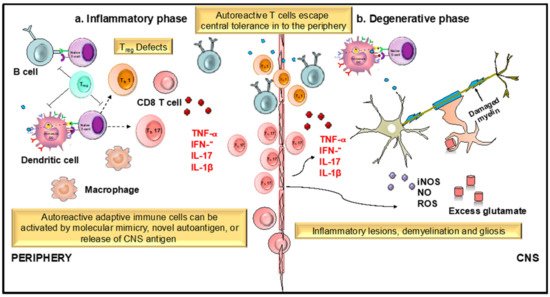 Figure 2.  Role of dendritic cells (DCs) and T cells in the development and progression of multiple sclerosis (MS). MS is an immune mediated disease characterized by an initial inflammatory event consisting of presentation of as yet unknown antigens to CD8 T cells, their entry across the blood–brain barrier (BBB) into the central nervous system (CNS), and their subsequent reactivation by CNS resident DCs and microglial cells. This results in an inflammatory cascade involving secretion of several proinflammatory mediators such as cytokines IL-1β, IL-17, and TNF- α. The release of these cytokines initiates the degenerative phase that is characterized by increase in iNOS, NO, glutamate, and ROS, which brings about formation of inflammatory lesions, gliosis, and demyelination, which are the hallmarks of MS.

Hematopoeitic stem cells in the bone marrow differentiate into plasmacytoid DCs from lymphoid progenitors in the presence of transcription factors such as like Irf7 and Spi-B [37] (Figure 3). DC progenitors in the bone marrow also give rise to circulating precursors in the presence of other factors like Batf3 and Irf4 that home to tissues, where they reside as immature cells with high phagocytic capacity [38]. Following tissue damage, immature DCs capture antigens through PRRs such as TLRs, and initiate the innate response through the secretion of IL-1 and type I interferons. Following antigen capture, immature DCs also subsequently migrate to the lymphoid organs, where they select rare antigen-specific T cells, thereby initiating adaptive immune responses. T cells are also educated by DCs to recognize and tolerate self-antigens. Sensing of microbial stimuli through PRRs causes DCs to enter the process of maturation, which involves the upregulation of major histocompatibility complex (MHC) molecules and co-stimulatory molecules. Peptide-loaded MHC molecules are recognized by Ag-specific T cells via the T-cell receptor (TCR), constituting signal 1 of T cell activation. Signal 2 consists of binding of costimulatory molecules on DCs to CD28/CD40L on T cells. Activated T cells in turn help DCs in terminal maturation through the ligation of CD40 and CD80/86. The final step in T cell activation is signal 3; the release of inflammatory cytokines and chemokines promoting the differentiation of naïve antigen-specific T cells into effector cells, as well as the activation of various other types of immune cells by the dendritic cells. Therapeutic agents targeting the various steps involved in DC-mediated T cell activation may be critical in the amelioration of various chronic inflammatory diseases. 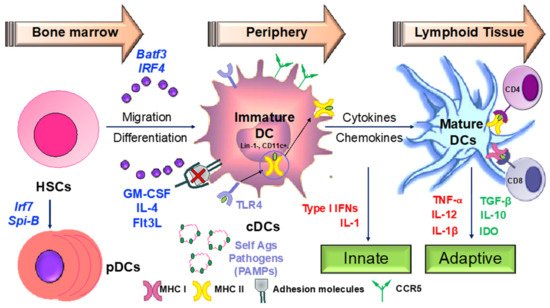 Figure 3.  Dendritic cells as sentinels of the immune system. DCs orchestrate the immune response initiating both the innate and adaptive branches of the immune system. Any dysregulation in their activity is the key to development of chronic inflammatory and autoimmune conditions. IFN—interferon; GM-CSF—granulocyte macrophage colony-stimulating factor; HSC—hematopoietic stem cell(s); MHC—major histocompatibility complex; TLR—toll-like receptor.
Various flavonoids, described earlier in this review, inhibit the inflammatory functions of DCs. The role of apigenin on DC maturation and function has been investigated in murine bone marrow derived DCs, where inhibition of p65 translocation has been linked to downmodulation in cell surface expression of DC co-stimulatory molecules and antigen capture [39]. Apigenin reduced the severity of arthritis in a collagen-induced arthritis mouse model by reducing proinflammatory cytokine secretion from serum and supernatants from lymph node DCs. DCs from the apigenin-treated mice also exhibited low expression of MHC and co-stimulatory molecules [40]. More recently, apigenin was seen to reduce the expression of co-stimulatory CD80, CD86, and MHC II on murine splenic CD11c+ DCs. Additionally, LPS-matured splenic DCs pulsed with ovalbumin (OVA)323−339 and treated with apigenin impaired OVA-specific T cell proliferation [41]. However, the molecular players involved in the apigenin mediated control of DC function are still mostly unknown. It is also unclear whether apigenin is able to modulate DC phenotype and functional characteristics to regulate antigen-specific T cells in neuroinflammatory conditions. Hence, we investigated the effects of apigenin in EAE mice and reported disease attenuation and reduced demyelination. Amelioration in the disease phenotype was dictated by reduced CNS infiltration of myeloid immune cells. Functionality of both Th1 and Th17 cells was impaired and FoxP3+ Treg cell numbers were seen to be boosted in apigenin-treated EAE mice. To evaluate whether these protective effects of apigenin are mediated by changes in DC phenotype and function, we investigated the effects of apigenin on human peripheral blood DCs. Unpublished data from these studies suggest that apigenin reduced cell surface expression of key antigen presentation and co-stimulatory markers and reduced the secretion of proinflammatory cytokines in LPS-matured DCs treated with apigenin in a RelB-dependent manner. It is known that NF-κB activation is required for T-cell activation by DCs, primarily through the canonical NF-κB pathway [42]. NF-κB consists of a family of five Rel proteins; namely, c-Rel, RelA/p65, RelB, NF-κB1 (p50 and its precursor, p105), and NF-κB2 (p52 and its precursor, p100), of which p65 and p50 predominantly compose the canonical pathway. Recent findings have increasingly suggested a role of NF-κB protein RelB in DC maturation, their antigen presenting functions, and DC-mediated immunity [42][43]. In mature DCs, RelB is upregulated and translocated into the nuclei in response to various maturation signals [44]. Additionally, the apigenin-induced changes in blood DCs lead to T-cell polarization away from Th1 and Th17 cells towards Treg cells, as was seen in the EAE mice treated with apigenin. Thus, a DC-central anti-inflammatory agent could be key in resolving CNS inflammation and the resultant pathologies in various neurodegenerative diseases.

2. Development of Apigenin as a Viable Candidate for Anti-Neuroinflammatory Treatment