Adaptive Behaviour in Down Syndrome

Adaptive behaviour is defined as “the effectiveness with which the individual copes with the natural and social demands of his environment”. Such skills in daily functioning are essential for personal and social autonomy and are particularly crucial for individuals with intellectual disabilities, (ID) when cognitive testing is difficult, allowing us to evaluate their mastery of the daily environment.

Vianello et al. [1] defined the “surplus effect” as performance above the average compared to the expected potential on the basis of mental age. However, daily life performance in ID is not only determined by intrinsic factors such as cognitive and linguistic abilities, as motivation and efficacy are also influenced by external factors. The presence of strangers, for example, and the dependence on a familiar adult person have been found to exert a negative influence [2], whereas educational programmes and inclusive schooling have been shown to foster the surplus effect [1][3][4][5].
For genetic syndromes such as DS, a large variability in adaptive behaviour exists [6], indicating that development is not only determined by genetics, but also by other factors (e.g., early, tailored rehabilitative programs, schooling, and occupational programmes [7]). Adaptive behaviour in individuals with Down syndrome (DS) typically shows a specific phenotypic profile with points of strength in self-care, daily living skills, and socialisation, and a point of weakness in reception [8]: adaptive skills are generally higher than cognitive and language abilities, and they continued to improve with age [9][10], even past the time when cognitive abilities have usually reached a plateau [11].
The few previous studies that examined the effect of early treatment programmes in childhood [12] on DS outcomes showed no early change in adaptive skills in childhood, and slowly increasing adaptive skills until middle adulthood [11]. In September 1978 (Legge no. 517/1977), inclusive schooling started to become mandatory for all children in Italy, obliging teachers to develop specific and individual treatment and educational programmes for each child with ID. Furthermore, the presence of a support teacher with the child in class also became mandatory.
In the current analysis, we sought to study the impact of inclusive schooling, parental educational levels, and early treatment programmes on adaptive functioning in DS adulthood. We hypothesised that school inclusion promotes the surplus effect of adaptive behaviour in DS adulthood. Secondarily, we hypothesised that age, early treatment programmes, and parental educational levels would additionally enhance the surplus effect.

Fifty-four DS individuals were included (22 females) with a mean age of 28.6 ± 8.8 (min. 19 to max. 52.3 years). Thirty-five individuals were under 30 years old, while the remaining 19 participants were all above 30 years of age. All individuals showed the clinical phenotype of DS; in 51 individuals, clinical diagnosis was confirmed by cytogenetic analysis where 43 individuals (79.6%) showed complete Trisomy 21, and eight individuals (14.8%) showed mosaic DS. Cytogenetic analysis could not be performed on the three remaining individuals (5.6%) because of their refusal of blood withdrawal.
The majority of individuals showed a surplus effect regarding their overall level of adaptive behaviour (35/54, 65%) as well as in all the main domains and subdomains (Figure 1). The main domain of socialisation showed the highest mean equivalent age (Table 1). Within the subdomains, the highest mean equivalent ages were seen in domestic skills and coping strategies (mean 9.9 ± 3.3, min. 3.3–max. 16.9; mean 8.3 ± 3.6, min. 3.0–max. 15.3, respectively). Cognitive testing by CPM (in one individual with Leiter Scales) could be performed in 48 individuals. The remaining six participants were not testable by CPM or Leiter Scales and were classified as profound ID. By virtue of the small numbers in the profound and severe ID groups, these two groups were put together. Individuals were hence divided into three groups of ID (mild, moderate, and severe ID). The mean intelligence quotient (IQ) was 51.3 ± 12.2 (min. 30.0, max. 80.0); mean equivalent mental age at the 50th percentile was 5.2 ± 1.8 (min. 3.0; max 10.0 years). Seventeen individuals belonged to the mild ID-group (32%), 19 (35%) to the moderate ID-group, and 18 (33%) to the severe ID-group. 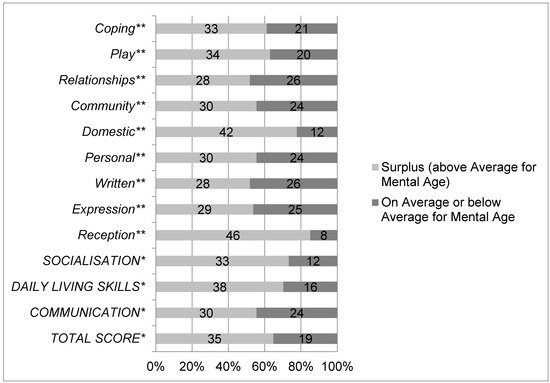 Secondary endpoints were the proportions of a surplus effect in the main domains and subdomains of adaptive behaviour in DS individuals with and without inclusive schooling. Individuals with inclusive schooling showed higher proportions of a surplus effect in all main domains and subdomains except in domestic skills. Significantly higher percentages of the surplus effect were observed for individuals with inclusive schooling in the main domain socialisation (p = 0.045), and in the subdomains written (p = 0.022) and community (p = 0.016).
After adjustment (Table 3) in the multivariate logistic regression model, the surplus effect in the domain socialisation showed a trend pertaining to gender (p = 0.077), and was significant in the subdomain community adjusted for gender (p = 0.023), for gender and paternal educational level (p = 0.039), and for gender and maternal educational level (p = 0.025). In the subdomain written, no significant differences were observed in the multivariate regression model. However, after adjustment, a higher percentage of surplus effect was observed in the subdomain play when adjusted for gender (p = 0.036) as well as for gender and maternal education (p = 0.051).