Very low-density lipoprotein (VLDL) and chylomicrons, which are known as TG-rich lipoproteins (TRLs), are spherical particles with core lipids (TG and cholesterol esters), phospholipids, free cholesterol, and surface apolipoproteins. The origins of TGs are generally exogenous or endogenous. Exogenous TG is mostly obtained from daily diet and transported within chylomicrons, while endogenous TG circulates in VLDL and is mostly formed in the hepatobiliary system.

During the past decades, the risk of atherosclerotic cardiovascular disease (ASCVD) and mortality has been much reduced due to advances in pharmacotherapy, intervention devices, and techniques. [1][2] ASCVD risk is significantly reduced by controlling blood low-density lipoprotein cholesterol (LDL-C) level [3]. Statin is the drug of choice to treat hypercholesterolemia. Non-statin medication including PCSK9 inhibitors and ezetimibe would further reduce LDL-C level while added to a statin or act as statin alternatives. Bempedoic acid is a newly approved effective non-statin LDL-C lowering agent [4]. Bempedoic acid has been associated with increased incidence of hyperuricemia, gout, and elevated serum creatinine level. On-going trials will clarify its long-term effect on cardiovascular outcomes [5].
However, the risk of ASCVD has not been eliminated. In the CANTOS trial, patients with a history of myocardial infarction (MI) had a 20% 5-year rate of recurrent major cardiovascular events (MACEs) despite statin treatment [6]. These residual risks can be caused by many factors, and methods to modify these factors have been proposed in contemporary guidelines. For example, measuring the lipoprotein(a) (Lp(a)) level should be considered among high-risk patients for a more precise reclassification and identification [3][7]. Lipid and lipoprotein metabolism disorders remain an unsolved problem. Whilst most guidelines encourage achieving target levels of specific lipoproteins to reduce the risk of ASCVD, increasing evidence has shown that molecular modification of these lipoproteins also has a critical impact on their atherogenecity and may contribute to residual ASCVD risk (Figure 1). For example, native low-density lipoproteins (LDLs) are much less atherogenic than those that have been structurally modified, such as by oxidation [8]. Apolipoproteins also play important roles in modulating lipid homeostasis and may alter the functions of different lipoproteins. In this review, we aim to update the evidence on modifications of major lipid components, including LDL, high-density lipoprotein (HDL), triglycerides (TGs), apolipoprotein, and Lp(a). We also discuss examples of translating findings from basic research to potential therapeutic targets for drug development. 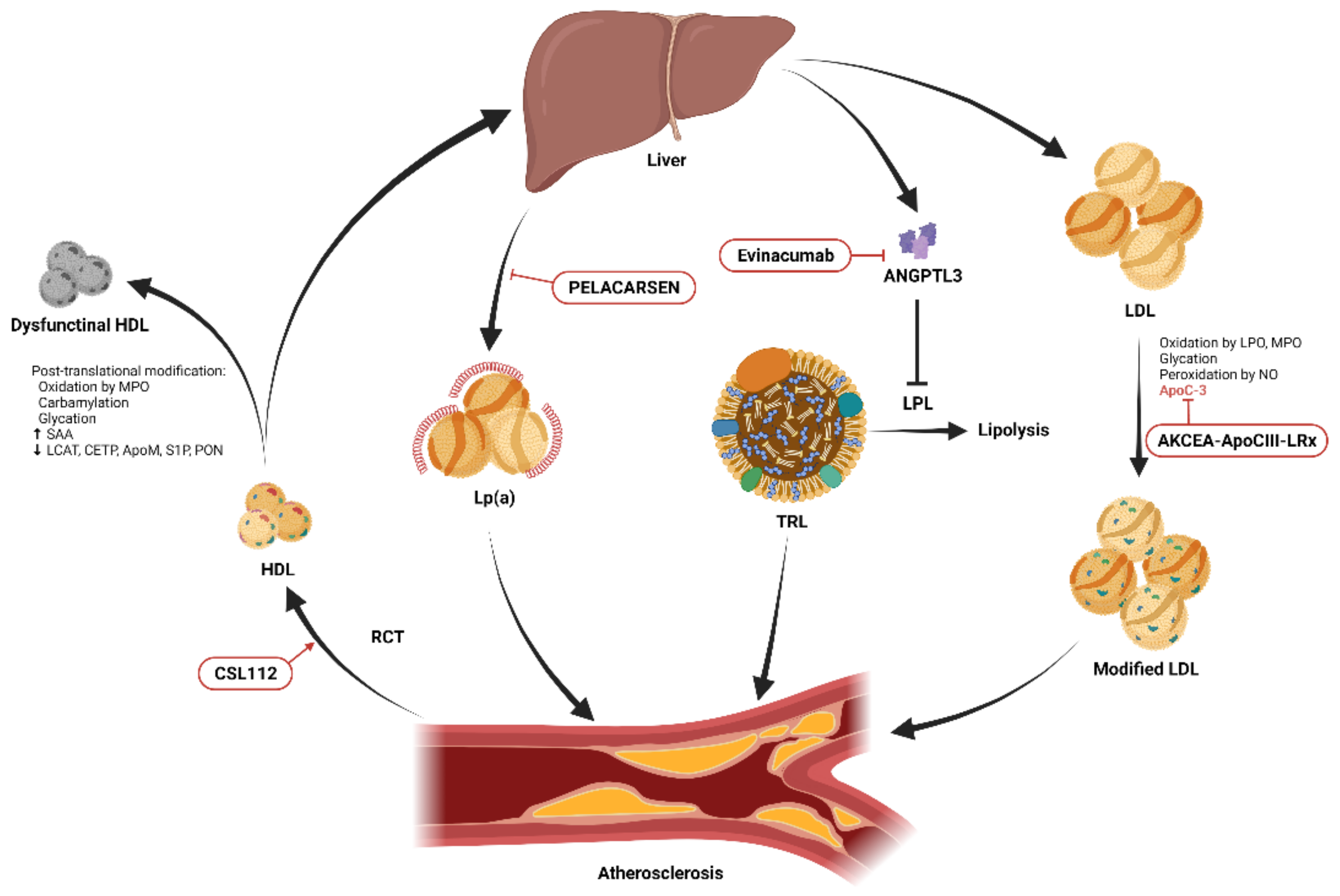 Figure 1. Schematic diagram showing the essential modifications of low-density lipoprotein (LDL) and high-density lipoprotein (HDL) and potential therapeutic targets. HDL promotes cholesterol efflux from cells within atherosclerotic plaques through reverse cholesterol transport (RCT) and transports excess cholesterol from peripheral tissues to the liver for excretion. Post-translational modifications including oxidation, carbamylation, glycation, and alterations of its lipidomic and proteomic structure result in dysfunctional HDL. Infusion of reconstituted apolipoprotein A-I, CSL112, enhances RCT. Lipoprotein(a) (Lp(a)) promotes atherosclerosis through its proinflammatory and antifibrinolytic effects. The production of Lp(a) in the liver can be reduced by the novel antisense oligonucleotide, PELACARSEN. Angiopoietin-like protein 3 (ANGPTL3) produced in the liver inhibits lipoprotein lipase (LPL)-induced lipolysis, resulting in increased circulating triglycerides carried by triglyceride-rich lipoproteins (TRLs), and accelerated atherosclerosis [9]. This process can be blocked by the ANGPTL3 inhibitor, evinacumab. Native LDL is modified by oxidation, glycation, peroxidation, and apolipoprotein C-III (apoC-III) adhesion and becomes more atherogenic. The expression of apoC-III can be suppressed by another novel antisense oligonucleotide, AKCEA-ApoCIII-LRx.

Hypertriglyceridemia is a prevalent condition observed in daily medical care. According to previous literature, its prevalence in the adult population is approximately 10% [10][11][12]. Moreover, the increasing trend of hypertriglyceridemia has been parallel to that of type 2 diabetes and obesity in the past decades [11]. Very low-density lipoprotein (VLDL) and chylomicrons, which are known as TG-rich lipoproteins (TRLs), are spherical particles with core lipids (TG and cholesterol esters), phospholipids, free cholesterol, and surface apolipoproteins. The origins of TGs are generally exogenous or endogenous. Exogenous TG is mostly obtained from daily diet and transported within chylomicrons, while endogenous TG circulates in VLDL and is mostly formed in the hepatobiliary system.
The levels of fasting and postprandial TGs depend on the balance between lipoprotein lipase-mediated lipolysis and uptake in the human liver. VLDL overproduction is the most common upstream cause of hypertriglyceridemia, and the inherited capacity of the lipoprotein lipase-mediated lipolysis pathway modulates the steady-state level. Comprehensive evaluations are strongly suggested when hypertriglyceridemia is suspected. Furthermore, insulin resistance, overweight, and type 2 diabetes mellitus may be detected simultaneously in this population. In clinical practice, these conditions are usually treated as metabolic syndrome, which comprises the aforementioned three conditions. Metabolic syndrome may increase VLDL levels, especially when free acids and insulin accumulate in the circulation [13]. An environment with an extremely high free acid concentration, hyperglycemia, and insulin resistance, would result in increased chylomicron secretion, while glucagon-like peptide 1 would play a counterbalancing role in the pathway [13]. Moreover, apoC-III has been shown to decrease the removal of remnants in individuals with high VLDL levels and a higher apoC-III concentration is an important factor leading to dyslipidemia [14].
TG-rich VLDL particles and metabolic remnants are the main transporters of TGs in human circulation. The plasma concentration of TGs has been shown to be parallel to the circulating apo B-containing TRL level, which is known to be associated with ASCVD formation [15]. A non-fasting TG level of 6.6 mmol/L was significantly associated with a 5-fold higher risk of acute coronary syndrome, a 3-fold increased risk of stroke, and a 2-fold increased adjusted risk of all-cause mortality compared to a level of 0.8 mmol/L in population-based cohort studies in Copenhagen [16][17]. These results show the importance of monitoring the TG level in primary ASCVD risk modification. In another study investigating secondary ASCVD risk after acute MI, TGs were found to be significantly associated with both short-term and long-term ASCVD outcomes. Furthermore, most patients in the study had been treated with statins, which further highlights the crucial role of TGs in secondary ASCVD prevention [18].
Several studies have used Mendelian randomization and shown that the association between TG concentrations and ASCVD may be causal. Nevertheless, the evidence needs to be interpreted with caution, because nearly all variants associated with TGs were also associated with the trends of HDL-C, LDL-C, and Lp(a) [19][20]. In another study, the authors used Mendelian randomization to show that TG-lowering lipoprotein lipase variants and LDL-C-lowering LDL receptor variants had similar effects on the ASCVD risk per unit change in apo-B [21]. Taken together, these studies demonstrated the causality of TRLs and their remnants on the ASCVD risk, partly due to the plasma level of apo B-containing particles. Another possible mechanism underlying the relationship between TGs and atherosclerosis is the deposition of cholesterol-ester-enriched smaller TRLs on the arterial walls and the subsequent initiation of pro-inflammatory/thrombotic pathways. Furthermore, high circulating TG levels have been associated with pathological HDL-C particles, which could lead to an increased risk of ASCVD [12]. In contrast, the correlation between circulating TG concentrations and ASCVD risk has varied among previous studies and was lost in several multivariate analyses [22]. Moreover, the correlation was reduced after adjusting for non-HDL-C or apoB in an epidemiological study [23].
Collectively, the aforementioned studies demonstrate that TRLs and their remnants play a crucial role in ASCVD risk assessment [24]. According to current clinical guidelines, lowering LDL-C remains the primary treatment goal in the management of dyslipidemia. In addition, clinicians should focus on modifications of TRLs, such as non-HDL-C and apoB, which are highly recommended in the updated guideline [7]. Previous studies on fibrates, niacin, and cholesteryl ester transfer protein inhibitors did not demonstrate a robust or convincing reduction in the risk of ASCVD in an optimal cholesterol-lowering population [25][26]. Nevertheless, several ongoing trials are focusing on the important roles of TRL with respect to the residual ASCVD risk in statin users. The results of these ongoing clinical trials and upcoming evidence regarding omega-3 fatty acids (high-dose icosapent ethyl) [21], and the selective peroxisome proliferator-activated receptor modulator pemafibrate may help to clarify which population will benefit from a reduced risk of ASCVD by lowering TRL levels [27][28]. The development of molecular technologies has provided more detailed information on the pathways underlying TRL modulation. Several emerging therapeutic molecules have been targeted, including inhibitors of angiopoietin-like protein 3 (evinacumab; allele-specific oligonucleotide IONISANGPTL3-LRx) (Table 1) [29], and inhibitors of intestinal diacylglycerol acyltransferase (pradigastat) [30], as well as those targeting apoC-II and A-V and angiopoietin-like protein 4 [31]. TRL modification strategies in specific patients can be expected to become a crucial part of lipid-directed treatment in the near future.
Table 1. Potential therapeutic targets and emerging pharmacological lipid-lowering approaches.
ABCA1, ATP binding cassette subfamily A member 1, ASCVD, atherosclerotic cardiovascular disease; GalNAc3, triantennary N-acetyl galactosamine; LDL-C, low-density lipoprotein cholesterol; TG, triglyceride; Lp(a), lipoprotein(a).

LDL may undergo structural change by oxidation, glycation, and peroxidation, and these modifications result in progressive atherosclerosis. HDL may undergo post-translational modifications such as oxidation, carbamylation, and glycation, and alteration of its cargo molecules such as SAA, LCAT, apoM, S1P, and PON1.
These modifications could decrease the atheroprotective function of HDL. Currently, no pharmacological approach has been developed to block or reverse these modifications. Research on how these modifications are modulated is still needed and will uncover more potential therapeutic targets. Pharmacotherapies targeting a reduction in TGs, apoC-III, and Lp(a), and an increase in apoA-1, are currently under investigation, and promising preliminary results have been reported. Clinical trials that assess the effects of these therapies on cardiovascular events are underway. These targets may further shape the landscape of dyslipidemia treatment and decrease the residual risk of cardiovascular events.