A unique collection of paleofungi from permafrost sediments, cryopegs, paleoseeds, and frozen volcanic ash from the Arctic and Antarctic, collected at different depths, was created in All-Russian Collection of Microorganisms (VKM). Some samples are as old as 3 million years. The collection includes psychrotolerant fungi, which have wide adaptive potential and are able to thrive in low-temperature habitats, and fungi that remain viable due to the presence of natural cryoprotectors that ensure the survival of fungal cells during low-temperature preservation in permafrost sediments. The collection contains 780 strains from 79 genera and more than 160 species and is maintained in accordance with international standards of microbial viability preservation and information support.

When we talk about paleomicology, by analogy with paleobotany, which studies fossil plants, we are referring to an aspect of paleontology that involves a comprehensive study of the fungi of the geological past. Usually, these are findings of fossil remains of higher fungi in ancient sediments. In this paper, we refer to paleofungi as organisms that remain viable in permafrost, which make up a unique natural collection of biomaterial containing samples "deposited" at different times, from thousands to millions of years ago.
The presence of viable prokaryotes in the Earth’s cryosphere was discovered at the beginning of the 20th century and was presented in studies by Omelyansky (1911) and Isachenko (1912) [1]. Studies from the second half of the 20th century, conducted in compliance with aseptic principles, showed that eukaryotes remain viable in permafrost soils for long periods of time. As a result, the isolation and identification of extremotolerant fungi living at low temperatures became possible [2][3]. However, mostly the surface horizons have been studied.
Leading mycological collections (CBS, ATCC, and possibly some others) keep strains of mycelial fungi isolated from low-temperature, mainly surficial Antarctic habitats. There are also specialized collections of such fungi. Thus, the Culture Collection of Fungi from Extreme Environments (CCFEE) was created at the Italian National Antarctic Museum (MNA, Section of Genoa); it preserves the biodiversity of Antarctic fungi and contains approximately 500 strains [4].
With the development of comprehensive international programs and the inclusion of mycological topics in programs of international permafrost research, the study of not only the surface, but also the deeper ancient horizons of Arctic and Antarctic permafrost became possible.

The collection is made up of strains isolated from different types of samples. In the Arctic region, there are permafrost sediments of diverse genesis with ages from 5–10 thousand up to 2–3 million years and from various depths (Kolyma lowland, Russia); cryopegs (Kolyma lowland, Russia); permafrost sediments of diverse genesis from various depths with ages from 10 thousand to 2.5 million years (McKenzie River delta, Canada); frozen volcano ash (deep layers) (Kamchatka, Russia); fossil seeds and embedded frozen material and ancient ground squirrels burrowing in permafrost, 32 thousand years (Kolyma lowland, Russia); and the mummy of the Bilibino horse, 31–58 thousand years (Chukotka, Russia). In the Antarctic region there are permafrost sediments of diverse genesis with different ages and depths in dry valleys (Meyer, Taylor, and Beacon Valleys), and in the eternal ice and glaciers of Central Antarctica.
Due to the variety of studied substrates, it should be noted that 74% of the strains stored in the collection are isolated from permafrost sediments of various nature, 10% from the salt water of cryopegs and 9% from frozen volcanic ash. Approximately 2–2.5% of the strains were isolated from the following substrates: the surface of fossil seeds preserved in gopher burrows and embedded in frozen material, the surface of a fossilized horse found in permafrost, and glaciers.

The collection of paleofungi includes 780 strains belonging to 79 genera and more than 160 species. Some strains were not identified by cultural methods, as they represent sterile mycelia, which are often isolated from samples taken from Arctic and Antarctic habitats. Determining their taxonomic composition, quantity, distribution by borehole profile, and potential ability to decompose organic matter is now quite relevant. According to our estimates, based on molecular biological identification of many strains from the collection of paleofungi, basidiomycetous fungi make up about half of all sterile mycelia from permafrost.
The majority of fungi in the collection comprises ascomycetous anamorphs. Basidiomycetous fungi comprise up to 4% of all stored strains, and 1% are zygomycetous fungi.
Among the classes of ascomycetous fungi, Eurotiomycetes has the largest number of strains due to the high representation of the genus Penicillium, with 241 strains in the collection (Figure 1). Next in number are the classes Dothideomycetes and Leotiomycetes, which have a special position in the study of the Arctic and Antarctic. Among the representatives of these classes, fungi show the greatest diversity, with a high frequency of occurrence in low-temperature ecotopes [5]. There are markedly fewer members of the class Sordariomycetes, and the classes Pezizomycetes and Saccharomycetes are represented by one or two genera. 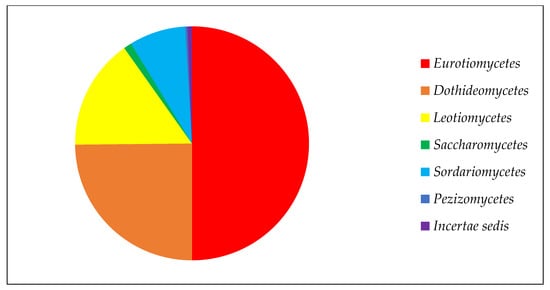 Long-term research of low-temperature habitats of mycelial fungi has allowed us to establish that the mycobiota of permafrost can be divided into two groups: psychrotolerant fungi, which have wide adaptive potential and are capable of developing in this ecotope, and fungi that remain viable due to the presence of natural cryoprotectants that ensure the survival of fungal cells in the process of low-temperature conservation in permafrost sediments. As these groups are of great interest to researchers, both scientifically and practically, they were deposited in our collection.
Different substances and even biological objects can possess protective properties in relation to fungi. For example, in experiments on paleoseeds of higher plants found in gopher burrows in permafrost over 30 thousand years old, it was shown that seeds are a special habitat for microorganisms contributing to their preservation in the permafrost. Representatives of fungal species inherent to these plants have been preserved on the seeds, which are natural protectors, and their number was also very high. It was established that the ancient seeds of narrow-leafed campion (Silene stenophylla) were dominated by fungi of the genus Phoma; the frequency of occurrence of isolated Phoma crystallifera reached 70% in the studied seed samples. At the same time, the number and species composition of fungi from the frozen mass in which the seeds were embedded were very different from those of the fungal community of the seeds themselves, which indirectly confirms the protective effect of this natural substrate [6].
The fact that representatives of most strains of sterile mycelium identified by molecular biological methods belong to plant-associated species serves as further confirmation of the hypothesis regarding the possibility of preserving fungi, including higher taxa, in permafrost in the presence of natural cryoprotectants. Wood-destroying basidiomycetous fungi, which mainly cause white rot of wood of various species, including Antrodia malicola, Bjerkandera adusta, Schizophyllum commune, and others, are present among the identified species. Phytopathogenic fungi have been identified, such as the basidiomycetous Thanatephorus cucumeris, which causes rot in vegetable crops [7]; ascomycetous Phaeosphaeria, which is a pathogen of bread cereal leaves [8]; ascomycetous anamorphic species of the genus Phoma, which cause phomosis wilt of various crops [9]; and representatives of the genus Alternaria, pathogenic agents of plant disease [10].
These fungi, as well as many others that have retained their viability in the presence of natural cryoprotectants, are kept in the collection of paleofungi.
Another group of organisms with high adaptive properties includes fungi of the genera Penicillium, Cladosporium, and Pseudogymnoascus (anamorphic state (am): Geomyces), which are the most widely distributed in permafrost.

The genus Penicillium is represented in our collection as the most diverse: 241 strains belonging to 43 species, including P. chrysogenum (41 strains), P. aurantiogriseum (24 strains), P. minioluteum (22 strains), P. variabile (17 strains), and P. palitans (8 strains). Possible adaptation of these fungi to low-temperature conditions is indirectly confirmed by the data obtained in our study [11]. This reflects a clear tendency of cultures of these genera isolated from permafrost sediments to grow preferentially at low temperatures.
Eighty-five strains of the genus Penicillium preserved in the collection of paleofungi isolated from sediments of the Arctic and Antarctica with known geological age were tested for their secondary metabolite production capability. Methods for investigating secondary metabolites have been described in detail previously [12]. Since secondary metabolites provide a competitive advantage for fungus producers for survival in extreme ecotopes, such a search among paleo- and extremotolerant fungi is valid. The presence of producers of potentially useful substances among the paleofungi is confirmed in this study.
Among the studied micromycetes, 47 secondary metabolites were found with an already known chemical structure and two new metabolites from the group of quinoline alkaloids, quinocitrinins A and B. They were discovered for the first time in P. citrinum strain VKM F-4043D (FW-800) isolated from permafrost Pliocene deposits occurring at a depth of 11.5 m in the Kolyma lowland [13]. Quinocitrinins exhibit a wide range of antimicrobial activity and are cytotoxic to tumor cells. Later, these substances were found in P. waksmanii strain VKM F-4431 (FW-2875) isolated in an estuary of the Bolshaya Chukochya River (Kolyma lowland) from the horizon lying at a depth of 31.3 m and dated at 100–200 thousand years. Both strains also produce a clavin series alkaloid, epoxyagroclavin I, which is of great practical interest for its diverse biological activities [14]. This compound is known to possess neurotropic activity and have a moderate hypotensive effect.
Other antibiotics have also been found. The study of P. chrysogenum showed the presence of producers of two antibiotics, questiomycin A and xanthocillin X, among the strains isolated from late Pleistocene deposits of the Kolyma lowland sampled at a depth of 15.6 m, and from the Holocene frozen volcanic ash of Kamchatka at a depth of 9.6 m. Xanthocillin X has the widest antibacterial spectrum of action, and bacteria remain sensitive to it for a long time [12]. Questiomycin A inhibits pulmonary metastasis caused by melanoma cells in mice [15].
In studying isolates from cryopegs, P. thymicola strain VKM F-4453 was discovered, isolated from cryopeg water at a depth of 17.00–21.00 m (horizon age 100–120 thousand years). This strain also synthesized two substances with high antitumor activity, fumiquinazolines F and G [16].
In general, most detected compounds (49%) belong to diketopiperazine and clavin alkaloids. Quinoline alkaloids and polyketides account for 12.2% each, and benzodiazepine alkaloids, quinazoline alkaloids, and amino acid derivatives are present in equal shares of 8.2%. One secondary metabolite (PR toxin) belongs to the terpene group (2%) (Figure 2).

Figure 2. Secondary metabolites of Penicillium strains from collection of paleofungi.
The data above confirm that the study of fungi from the circumpolar regions is very promising for biotechnology and medicine.