Renewable energy sources, such as photovoltaics and wind energy, are receiving significant attention to increase the penetration rate of renewable energy sources and reduce greenhouse gas emissions, due to their energy potential and the maturity of these technologies [1]. These sources are alternatives for conventional energy sources that supply power for self-consumers and remote communities. Different energy configurations could be configured to enable systems operation in both a grid-connected mode as well as a standalone mode. As renewable energy sources are intermittent in nature, it becomes challenging to integrate a significant number of renewable energy sources with the power grid. Communication infrastructure is the crucial element and the main building block for future smart grids, which enables the integration of DERs and bidirectional energy and information flow in the power distribution system. Figure 1 shows a schematic diagram for the grid integration of HRES. In this integration, HRES will provide many services for electric power utilities during peak demand by supporting different services such as demand response and demand-side management. The underlying communication network will play an essential role in enabling the integration of DERs with improved resilience, reliability, and efficiency. 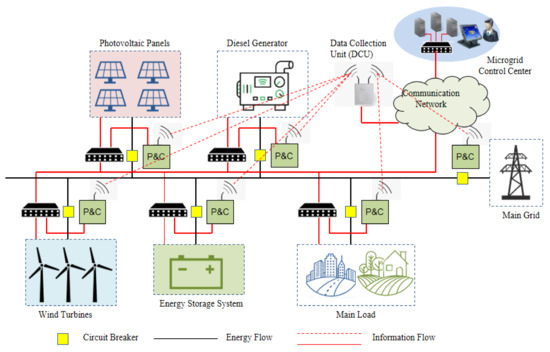 In HRES, communication infrastructures are crucial elements that are responsible for data exchange among data resources (sensors and meters), controllers, and the control center. In order to support remote monitoring and control operation, the information flow from different entities defines the system architecture [8]. The IoT technology will provide great opportunities for sensing, communication, processing, and actuating to support various microgrid applications. First, measured data are acquired and transmitted to the local control center using a communication network. Then, decisions are made with this data, and control commands are sent through the communication network where the control commands are run using controllable devices. Two main types of communication schemes could be considered: centralized schemes and distributed schemes. In the centralized scheme, all data are transmitted to a central control center where data are processed and control commands are transmitted to controllable entities. In the distributed scheme, all data are received and processed using the local controller. In order to control the entire system, local control centers need to share information with each other through the communication network.

This work focuses on the communication level between the local controller of HRES and the microgrid control center, where the status of different renewable energy sources and loads can be collected and communicated to a central controller that determines an appropriate action in the system. Figure 2 shows the IoT-based architecture for HRES which consists of four main layers: the power layer, the data acquisition layer, the communication network layer, and the application layer [9][10][11][12]. 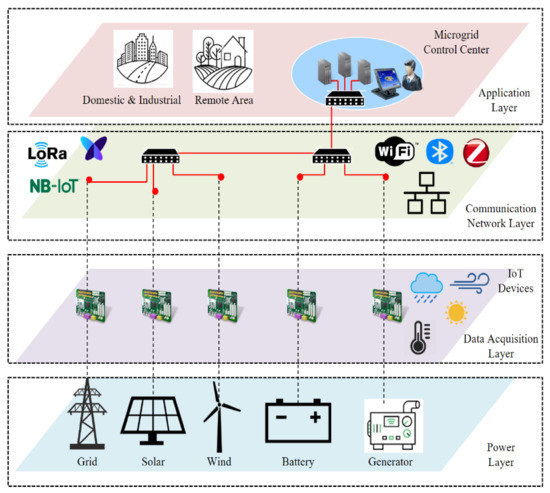 The power layer covers residential power generation and consumption. Examples of power consumption are residential homes/buildings that include different applications such as heating, ventilation, and air conditioning (HVAC), lighting, electric vehicles, and various appliances. Residential energy generation consists of various renewable energy sources, such as wind and solar power, conventional sources, such as diesel generators, and energy storage systems, such as batteries. Other elements that are part of the power layer are transformers, buses, and loads. Loads could be classified into three main types: residential, commercial, and industrial. In addition, various sensor nodes, measuring devices, and actuators are attached to the power system layer.

The data acquisition layer includes different types of sensor nodes and measurement devices connected to different subsystems of HRES. Data collected utilizing various sensor nodes and measurement devices is transmitted to the application layer through the communication network layer. Based on the data from different energy sources such as wind energy, photovoltaic system, diesel generator, and battery storage, HRES can be operated in island mode or grid-connected mode.

The communication network layer is responsible for receiving the data from sensor nodes and measuring devices in the power layer and sending it to the control center. This can be done through various network services, including home area network (HAN), building area network (BAN), neighborhood area network (NAN), and wide area network (WAN). Based on the type of communication technology, the communication network can be divided into wired-based solutions (PLC, Ethernet, optical fibers, etc.) and wireless-based solutions (Wi-Fi, ZigBee, WiMAX, LoRa, Cellular, etc.). The communication network layer enables data collection and transmission from each system component using intelligent electronic devices (IEDs) and remote terminal units (RTUs). The data is stored in the control center for different services such as human-machine interfaces (HMI), application servers, historians, databases, and web servers.

The main function of the application layer is real-time monitoring and control. All monitoring data and status information are received, stored, and processed for different services at the local control center. The control center incorporates a local area network (LAN) which enables communication with different protection and control devices such as IEDs and RTUs. Examples of smart home/building applications are energy consumption management, environmental control, and HVAC management. Other applications for power service providers are DER management, demand response, and EMS. The control center coordinates the system operation by receiving and analyzing the monitoring data received from the communication network layer.