The prevalence of chronic kidney disease (CKD) is increasing worldwide, and a close association between acute kidney injury (AKI) and CKD has recently been identified. Black cumin (Nigella sativa) has been shown to be effective in treating various kidney diseases. Accumulating evidence shows that black cumin and its vital compound, thymoquinone (TQ), can protect against kidney injury caused by various xenobiotics, namely chemotherapeutic agents, heavy metals, pesticides, and other environmental chemicals. Black cumin can also protect the kidneys from ischemic shock. The mechanisms underlying the kidney protective potential of black cumin and TQ include antioxidation, anti-inflammation, anti-apoptosis, and antifibrosis which are manifested in their regulatory role in the antioxidant defense system, NF-κB signaling, caspase pathways, and TGF-β signaling.

Kidney diseases are considered as a global public health problem. Chronic kidney disease (CKD) is a critical regulator of morbidity and mortality from non-communicable diseases, while the incidence rate of acute kidney injury (AKI) is increasing worldwide [1]. Patients with a history of AKI may develop CKD [2][3]. The pathophysiology of kidney disease is complex and includes inflammation, tubular injury, and vascular damage [4][5]. Being excretory organs, kidneys are particularly vulnerable to the toxic effects of xenobiotics and their metabolites. With the increasing exposure to xenobiotics such as drugs, toxins, and environmental chemicals, the global incidence of chronic human diseases including kidney disease is growing at an alarming rate [6]. Xenobiotics impair the structural and functional capacity of kidneys by inducing oxidative stress, inflammation, apoptosis, and fibrosis, leading to the development of AKI and CKD [6][7]. Although the pathophysiology of various kidney diseases has been studied, many targeted clinical therapies have failed [8]. Thus, urgent interventions are needed to treat patients with kidney disease.
Black cumin (Nigella sativa L.) is a popular spicy herb and its seeds, in particular, have traditionally been indicated in the management of various human ailments, including those affecting the renal system [9]. Thymoquinone (TQ), the main active component of black cumin seed and its oil, was shown to promote the function of different vital organs, including kidney function [10]. Mounting evidence shows that black cumin and TQ can alleviate kidney complications caused by various stress factors, namely chemotherapeutic agents, metabolic deficits, and environmental toxicants [11]. Evidence from the preclinical studies has shown that black cumin seed (in the form of powder, extracts, or oil) and TQ protect against kidney injuries induced by ischemia [12][13], cancer chemotherapeutic drugs (methotrexate and cisplatin) [14][15], analgesics (paracetamol, acetylsalicylic acid and aspirin) [16][17][18], heavy metal (arsenic and cadmium) [19][20], pesticide (piconazole and diazinon) [21][22], and other chemicals (carbon tetrachloride and sodium nitrite) [23][24]. Evidence, athough limited, also suggests clinical improvements in CKD patients treated with black cumin [25][26][27]. Besides, black cumin was shown to be effective in modifying various risk factors for kidney disease such as hypertension, atherosclerosis, dyslipidemia, hyperglycemia, and diabetes [11]. The kidney-protective effects of black cumin are owing to its antioxidant, anti-inflammatory, immunomodulatory, antiapoptotic, and antifibrotic properties [11][28][29].

2. Antioxidant and Anti-Inflammatory Effects of Black Cumin and TQ 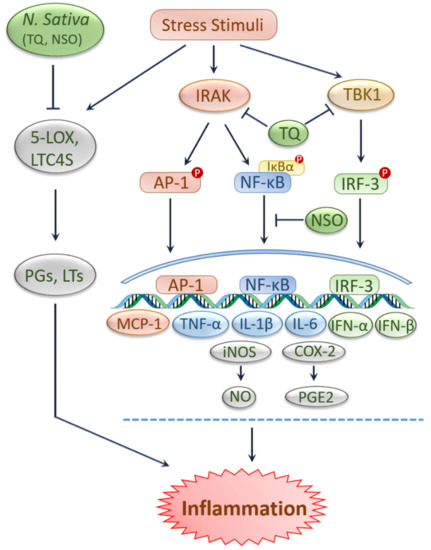 3. Protective Effects of Black Cumin and TQ against Kidney Injury

Table 2. Summary on the protective effects of black cumin against various kidney diseases in patients.