Oleic acid is not an essential fatty acid since it can be endogenously synthesized in humans. Stearoyl-CoA desaturase 1 (SCD1) is the enzyme responsible for oleic acid production and, more generally, for the synthesis of monounsaturated fatty acids (MUFA). The saturated to monounsaturated fatty acid ratio affects the regulation of cell growth and differentiation, and alteration in this ratio has been implicated in a variety of diseases, such as liver dysfunction and intestinal inflammation.

2. Oleic Acid in Health and Disease

In order to characterize the role of oleic acid in health and disease, numerous studies and clinical trials have been conducted (Table 2). Several studies have highlighted the importance of MUFA in the diet, suggesting that the source and origin of MUFA is fundamental to analyse the beneficial effects of this FA [38]. In Greece, Italy and Spain, olive oil consumption constitutes approximately 60% of MUFA intake, whereas in other countries MUFAs are mainly introduced with meat products [39]. A correlation between MUFA intake and the reduction of cardiovascular heart disease risk have been described [40], whereas a subsequent meta-analysis observed no significant association [41]. These conflicting data could possibly be explained considering the different sources of MUFAs consumed by different cohorts of patients. Llorente-Cortes et al. demonstrated that a MUFA-rich diet reduced the postprandial monocytes inflammatory state linked to metabolic syndrome [42]. Indeed, MUFAs display beneficial effects on insulin sensitivity and type 2 diabetes mellitus [43]. In particular, Vessby et al. observed that the reduction of SFA and the concomitant addition of MUFA to the diet ameliorated insulin sensitivity [44]. The western diet is rich in foods with high SFA abundance such as red meat and processed foods [45]. This fat overload contributes to weight gain and the succeeding inflammation, and SFA induce insulin resistance and type 2 diabetes mellitus [46]. Palmitic acid promotes the synthesis of non-esterified fatty acids (NEFAs), ceramides and reactive oxygen species (ROS), mitochondrial dysfunction and inflammation [47][48]. SFA are able to alter the microbiota composition in the gut as well by up-regulating LPS and toll-like receptor 4 (TLR4) levels [49]. The substitution of palmitic with oleic acid in the diet is able to reverse these detrimental metabolic effects of SFA. Cell culture studies have facilitated the definition of these molecular metabolic changes. In detail, oleic acid enhances mitochondrial oxidation of SFA by increasing triacylglycerol (TAG) and by reducing diacylglycerol (DAG) and ceramide production, thus protecting the cells from inflammation [50].
Table 2. Oleic acid clinical trials.
Furthermore, oleic acid displays the ability to prevent SFA-induced inflammation. In high fat diet fed mice, oleic acid administration ameliorated insulin sensitivity, reduced pro-inflammatory cytokines levels as Interleukin-1β, Interleukin-6 and Tumor Necrosis Factor-α and up-regulated the anti-inflammatory Inteleukin-10 and adiponectin levels [51]. Through this mechanism, oleic acid promotes M2 anti-inflammatory macrophages phenotype, leading to reduction of leukotriene B4 secretion and PTEN expression [52].
The peculiar beneficial role of oleic acid has been observed in several diseases including coronary heart disease, rheumatoid arthritis, and cancer. Oleic acid consumption prevents the risk of developing rheumatoid arthritis by increasing leukotriene A3 levels, a potent inhibitor of pro-inflammatory LTB4 [53]. In colorectal cancer HT-29 cells, oleic acid promotes apoptosis and cell differentiation via the downregulation of cyclooxygenase and Bcl-2 expression [54]. In breast cancer cells, oleic acid reduces the expression of the oncogene Her-2/neu and acts synergistically with anticancer drug trastuzumab [55]. Moreover, in breast tissue cells, oleic acid reduces the entering of lipid peroxidation into the phospholipid membrane of the cells [56].
Interestingly, in animal models, oleic acid is able to induce lung injury miming acute respiratory distress syndrome (ARDS). Oleic acid administration induces direct toxicity to the endothelial cells characterized by endothelial necrosis, epithelial injury and neutrophil infiltration [57][58]. Recently, it has been demonstrated that Liver X Receptor (LXR) activation protects the lungs from oleic acid-induced ARDS by decreasing the inflammatory response and by promoting antioxidant capacity [59]. On the other hand, in lung cancer, oleic acid exerts beneficial effects through promotion of apoptosis, mitosis arrest and cellular differentiation and by inhibiting angiogenesis [60]. In murine models, Piegari et al. have shown that an oleic acid-enriched diet ameliorated animal survival and lung tumour latency, confirming the oleic acid anticancer properties [61].
Finally, oleic acid displays a pivotal role in the development of the brain, the organ with the highest lipid content of the body second to white adipose tissue. In this organ, lipids are essential for the correct homeostasis and alterations in lipid metabolism are linked to neurological diseases [62]. Oleic acid is the only FA synthesized by astrocytes and it acts as a neurotrophic factor for neurons [63]. In astrocytes, albumin uptake and transcytosis via endoplasmic reticulum induces sterol regulatory element-binding protein-1 (SREBP-1) and stearoyl-CoA desaturase expression, causing oleic acid production. The synthesized oleic acid promotes axonal and dendrite growth and induces doublecortin expression, resulting in neuron migration [64][65][66]. These data confirm the pivotal role of oleic acid in astrocyte-neuron crosstalk and further studies should be performed in order to evaluate the role of oleic acid in neurodegenerative disorders. Given the crucial role of oleic acid in brain metabolism, Priore et al. treated C6 glioma cells with oleic acid and hydroxytyrosol and observed a reduction in de novo fatty acid and cholesterol synthesis, a crucial step in human glial cells malignancy [67][68].

SCD is an enzyme anchored to the endoplasmic reticulum, where it catalyzes the biosynthesis of MUFA from SFA, either derived from the diet or synthesized de novo. SCD is Δ9-fatty acyl CoA desaturases that catalyzes the formation of a double bond in the cis-delta-9 position of saturated fatty acyl CoA. The preferred substrates of SCD are palmitic (C16:0) and stearic (C18:0) acids, which are converted into palmitoleic (C16:1 n-7) and oleic (C18:1 n-9) acids, respectively [69] (Figure 1). These products are the most abundant MUFA incorporated into different lipid species, including triglycerides, wax esters, cholesterol esters, and phospholipids [70]. The ratio of SFA to MUFA is important to modulate phospholipid composition, and an unbalanced ratio toward SFA production is linked to multiple pathological conditions including obesity, diabetes, cardiovascular and neurological diseases, and cancer [71]. Moreover, MUFAs serve as mediators of signal transduction and cellular differentiation [71]. Thus, the expression of SCD is highly important in both physiological and pathological conditions and SCD is consequently tightly controlled at both transcriptional and post-translational level. Numerous dietary and hormonal signals and several transcription factors such as LXR, SREBP1C, carbohydrate response element binding protein (ChREBP), peroxisome proliferator activated receptor (PPAR), and estrogen receptor (ER) are involved in SCD transcriptional control [72][73]. 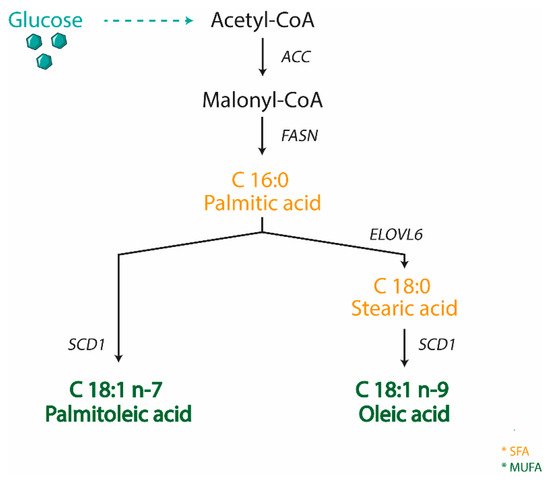 Figure 1. Scheme representing the biosynthesis of MUFA in animals. Stearoyl CoA Desaturase 1 (SCD1) catalyzes the rate-limiting step for the conversion of saturated fatty acid (SFA) into monounsaturated ones (MUFA). (ACC—acetyl CoA carboxylase; FASN—fatty acid synthase; ELOVL6—fatty acid elongases 6).
SCD is a highly conserved enzyme with multiple isoforms sharing similarities in protein sequences [74]. To date, two human isoforms (1 and 5) and four mouse SCD isoforms (SCD1-4) have been identified [75][76]. Despite a distinct distribution pattern, the different isoforms share the equal enzymatic function. Particularly, in both human and mice, SCD1 represents the predominant isoform and it is ubiquitously expressed among tissues, with constitutively high levels in lipogenic tissues, such as liver and white adipose tissue [74]. Contrarily, SCD5 is unique to primates and is highly expressed in brain and pancreas [76]. In adult mice, Scd2 isoform is ubiquitously expressed in most tissues except for the liver, whereas Scd3 and Scd4 expression is more restricted [77][78][79].
The existence of multiple SCD1 isoforms, sharing a high sequence homology and catalyzing the same biochemical reaction, poses difficulties in order to distinguish the role of each single isoform and its metabolic contribution. To this end, substantial insights into SCD1 functions have been gained by the use of specific mouse models, in which the expression of SCD1 is downregulated or its activity is inhibited. Several genetically engineered whole body and tissue specific SCD1 knockout models have been utilized [80] as well as Asebia mice, characterized by a whole-body deficiency of SCD1 due to a spontaneous mutation within the SCD1 gene [81]. Additionally, mice treated with antisense oligonucleotides (ASO) against SCD1—which reduces SCD1 expression in liver and adipose tissue—have been extensively employed [82]. Finally, various selective inhibitors targeting SCD1 activity have enabled the clarification of the role of this enzyme. Overall, these models demonstrate that SCD1 is a master regulator of lipid metabolism and is deeply involved in body weight regulation [83][84]. This is specifically highlighted by the resistance to diet-induced obesity and hepatic steatosis observed in SCD1 deficient mice [85]. These effects are predominantly derived from an increase in FA oxidation and thermogenesis, as well as a reduced lipid synthesis. The increased FA oxidation is mainly explained by a defect of skin permeability in SCD1KO mice which is causing heat leak and water link. The increased lipid oxidation is mediated by the induction of the AMP-activated protein kinase (AMPK) [86], resulting in phosphorylation and inactivation of ACC. The inactivation of this enzyme reduces the cellular levels of malonyl-CoA, a substrate for FA biosynthesis, which in turn suppresses FA oxidation by inhibiting the mitochondrial carnitine palmitoyltransferase 1 (CPT1) shuttle system, which controls the import and oxidation of FA in mitochondria. Malonyl-CoA reduction in SCD1KO mice relieves the inhibition of CPT1 by directing FA into mitochondria where they are subsequently oxidized. In SCD1KO mice, the up-regulation of whole-body thermogenesis in brown adipose tissue (BAT) is mediated by the activation of PGC-1α and uncoupling protein-1, which uncouples oxidative respiration from ATP synthesis, resulting in dissipation of energy as heat [87]. These modulations result in an increased rate of basal thermogenesis and, consequently, of whole-body energy expenditure.
Although many efforts have been made utilizing total body SCD1KO mice, the confirmation that these mice display altered skin permeability enhancing energy expenditure and protection from high fat diet-induced obesity [88], has led to the generation of tissue specific SCD1KO mice in order to study the contribution of this enzyme to metabolic disorders and related diseases.

The liver plays a central role as a metabolic hub, where multiple biochemical processes converge to render food nutrients available to the rest of the body. However, an unbalanced diet—rich in lipid and carbohydrates—together with a sedentary lifestyle, may severely compromise the hepatic health status. Indeed, it has been shown that a high energy intake with a concomitant low energy expenditure resulted in hepatic lipid accumulation, one of the key features of non-alcoholic fatty liver disease (NAFLD). NAFLD is the most common disease of the Western Countries, characterized by a spectrum of conditions that vary from hepatic steatosis to severe form of non-alcoholic steatohepatitis (NASH), which may eventually progress toward cirrhosis and end-stage liver diseases [89]. Despite the large amount of studies focused on the impact of hepatic metabolic alterations leading to the toxic effects of excess lipids and promotes liver diseases, it is now clear that metabolites from other organs may account for disease progression, such as adipose tissue and gut, as well. Whereas the communication between the adipose tissue and the liver has been extensively investigated, the gut-liver cross-talk exploration is just at the beginning. Not only the liver can influence the gut phenotype via bile acids or metabolites, but the gut harboring microbiota and secretory factors as well can affect the hepatic health status and promote lipid accumulation. However, accumulating data show that the total amount of lipids is not the major determinant of lipotoxicity, but that specific classes of lipids (palmitic acid, cholesterol, ceramides) promote cellular damage and disease progression [90].