The CatWalk system (CW) is an automated and exceptionally reliable system for assessing gait abnormalities and motor coordination. CW is a good tool for both studying improvements in the walking of animals after suffering a peripheral nerve and spinal cord lesion and to select the best therapies and procedures after tissue destruction, given that it provides objective and quantifiable data.

The CatWalk system (CW) is an automated and exceptionally reliable system for assessing gait abnormalities and motor coordination. CW is a good tool for both studying improvements in the walking of animals after suffering a peripheral nerve and spinal cord lesion and to select the best therapies and procedures after tissue destruction, given that it provides objective and quantifiable data. Most studies using CW for gait analysis that were published in recent years focus on injuries inflicted in the peripheral nerve, spinal cord, and brain. CW has been used in the assessment of rodent motor function through high-resolution videos, whereby specialized software was used to measure several aspects of the animal’s gait, and the main characteristics of the automated system are presented here. CW was developed to assess footfall and gait changes, and it can calculate many parameters based on footprints and time. However, given the multitude of parameters, it is necessary to evaluate which are the most important under the employed experimental circumstances. By selecting appropriate animal models and evaluating peripheral nerve and spinal cord lesion regeneration using standardized methods, suggestions for new therapies can be provided, which represents the translation of this methodology into clinical application.

Most neurological conditions, such as central and peripheral nervous system damage, are accompanied by gait changes. It is commonly agreed upon that the details of animal limb movements during locomotion, whether in injury or during recovery from spinal cord or peripheral nerve lesions, determined using appropriate models, are of utmost importance for the assessment of such conditions. Several functional tests are used to evaluate the motor recovery after experimental nerve injury and to appraise the potential regenerative therapies. The option for certain tests depends both on the lesion model and on the costs, since specific commercial systems have higher costs.

The measurement of motor function before and after nerve injury in animal models is very important for the assessment of nerve regeneration. There are several methods for the evaluation of nerve regeneration, many of which are based on the visual observation of laboratory animals moving in an open field. Nevertheless, all these observation methods require the training of observers that can be prone to human error and subjectivity. The automated gait analysis system CatWalk XT (Figure 1) can overcome possible human errors of observation since specialized software is used to objectively measure several aspects of gait, and it was applied to assess rodent walk using high-resolution videos [1]. Older studies have used a CW system without automatic analysis of paw parameters; therefore, we wish to focus attention on the studies that have used a CW XT with an automatic analysis system for monitoring gait and motor functions. 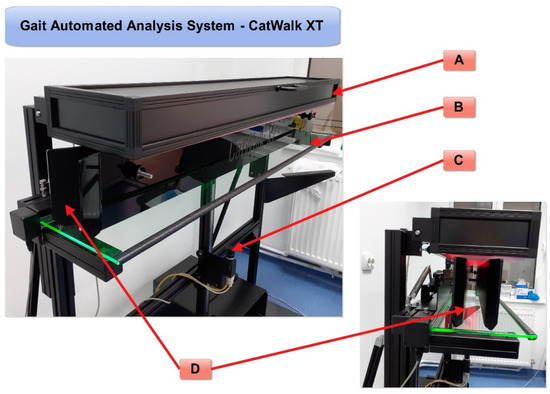 Figure 1. Automated gait analysis system—CatWalk XT: (A)—red LED lights in the ceiling; (B)—green LED lights along the walkway (reflected by the plantar surface of the rodent’s paw); (C)—a high-speed color camera for accurate spatial and temporal resolution; (D)—an adjustable corridor that directs the free movement of the rodents in a straight line with a glass walkway that enables CatWalk XT’s illuminated footprints technology (original photos).
Within this type of automated gait analysis, various parameters are registered and evaluated, as further presented. The experience gained using this analysis system would add information to the experimental models of neurological injuries and regeneration. In our review, we present the main features and methodology of this system, the main regeneration events that can be analyzed, and recent studies that have used this system for assessing peripheral nerve and spinal cord injuries.

4. Discussion Regarding General Outlines Using Computerized Gait Analysis System and its Effectiveness in In Vivo Experiments