Ellagic acid, a polyphenolic compound present in fruit and berries, has recently been the object of extensive research for its antioxidant activity, which might be useful for the prevention and treatment of cancer, cardiovascular pathologies, and neurodegenerative disorders. Its protective role justifies numerous attempts to include it in functional food preparations and in dietary supplements, and not only to limit the unpleasant collateral effects of chemotherapy. However, ellagic acid use as a chemopreventive agent has been debated because of its poor bioavailability associated with low solubility, limited permeability, first pass effect, and interindividual variability in gut microbial transformations. To overcome these drawbacks, various strategies for oral administration including solid dispersions, micro and nanoparticles, inclusion complexes, self-emulsifying systems, and polymorphs were proposed. Here, we listed an updated description of pursued micro and nanotechnological approaches focusing on the fabrication processes and the features of the obtained products, as well as on the positive results yielded by in vitro and in vivo studies in comparison to the raw material. The micro and nanosized formulations here described might be exploited for pharmaceutical delivery of this active, as well as for the production of nutritional supplements or for the enrichment of novel foods.

Pomegranate, Punica granatum, is well-known as a traditional medicinal fruit mentioned in the Old Testament of the Bible, the Qur’an, the Jewish Torah, and the Babylonian Talmud as a sacred fruit harbinger of fertility, abundance, and luck. Historically and currently, pomegranate has been used for various purposes [1]. The bioactive compound mainly responsible for the health effects of pomegranate is ellagic acid (EA), as it represents one of the most potent dietary antioxidants.

EA is a polyphenol compound which derives from ellagitannins (ET), a family of molecules in which hexahydroxydyphenic acid residues are esterified with glucose or quinic acid. Following a hydrolytic process, the hexahydroxydyphenic acid group is released, dehydrates and spontaneously lactonizes, forming EA. Punicalagin isomers are the most representative of total tannins extracted from pomegranate (Figure 1).

Present also in a large variety of tropical fruit, nuts, berries (strawberries, raspberries, blackberries, cranberries, goji berries) and in a type of edible mushroom (Fistulina epatica), EA has recently attracted deep interest, since many research studies showed the role of oxidative stress in different pathologic conditions such as cancer, diabetes, cardiovascular and autoimmune diseases, obesity, and neurodegenerative disorders [2][3][4][5][6][7]. In this regard, EA may be a useful adjunct in Parkinson’s disease treatment, as it proved to protect dopamine from oxidation and, by reducing inflammation and oxidative stress, to exert a neuroprotective effect [8]. Besides being able to reduce the pathological levels of NF-kB, EA may play a beneficial role in diseases associated with CNS inflammation, such as multiple sclerosis. EA has also been proposed as antidepressant and anxiolytic drug for its capability to modulate the monoaminergic system and to increase the endogenous levels of brain-derived neurotrophic factors [6]. In the last decade, several studies investigated EA effects on many types of cancer, showing its ability to arrest cell cycle progression, modulate pathways linked to cell viability, and inhibit angiogenesis via inactivating metalloproteinases [9][10][11][12][13][14][15][16][17][18]. For example, EA resulted in inducing apoptosis and modulating gene expression in different colon cancer cell lines at the concentrations achievable in the intestinal lumen from the diet, suggesting a potential role in cancer chemoprevention [19]. Moreover, EA may counterbalance the dangerous side effects of antitumoral drugs such as cisplatin, doxorubicin, and cyclosporine [20][21][22]. In addition, EA proved to possess antimicrobial properties inhibiting the growth of methicillin-resistant Staphylococcus aureus and Salmonella [23]. These properties were explained through the ability of EA of either coupling with proteins of the bacterial wall or inhibiting gyrase activity, which cleaves the DNA strand during bacterial replication. Furthermore, EA seemed to counteract the HIV-1 virus replication, by binding envelope proteins and inhibiting reverse transcriptase [24]. Pomegranate extract has been traditionally used for treating gastrointestinal bleeding and various types of wounds, due to EA’s ability to promote blood coagulation by the activation of the Hageman factor (Factor XII) [25]. Moreover, preliminary results suggest potential anti-inflammatory properties [26][27] and an important role in prevention of cardiovascular diseases [28][29][30]. Finally, EA finds application also in cosmetic and nutraceutical industries, mainly for antiaging and prophylactic purposes respectively [31][32][33]. An overview of EA activities is shown in Figure 2. 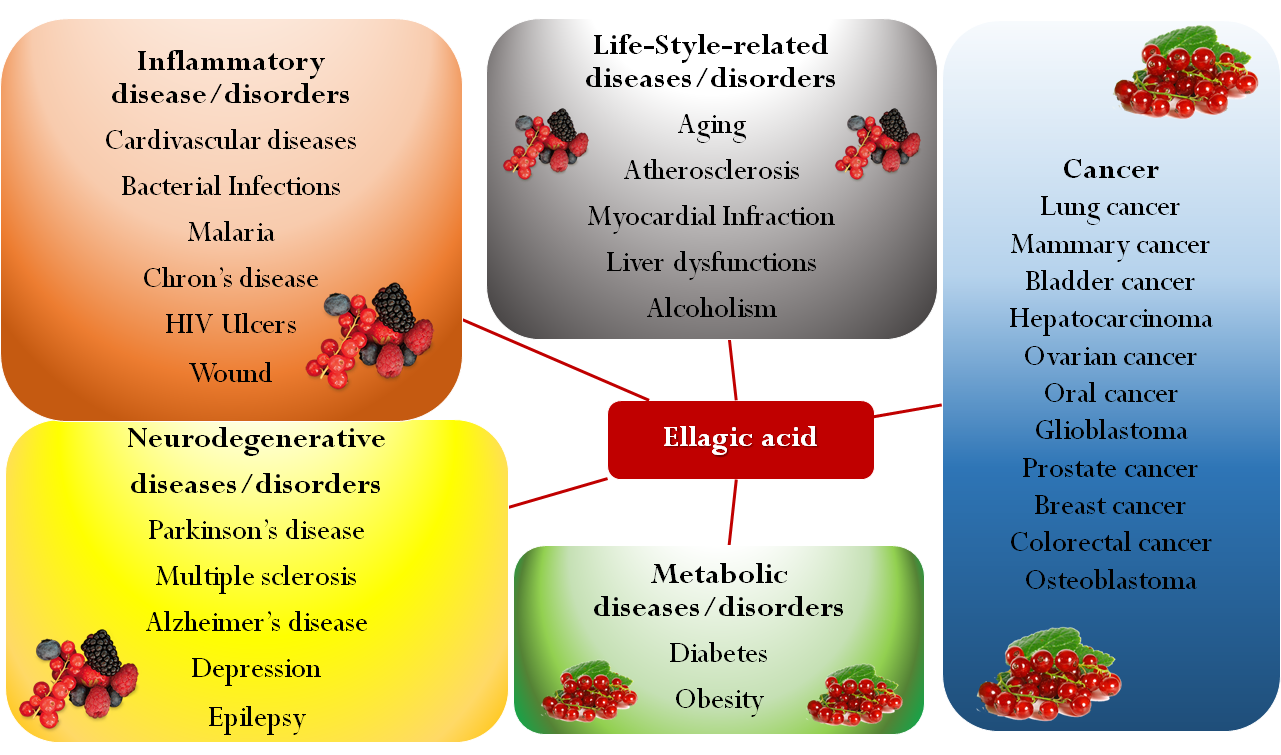 However, though EA has the potential to become an efficacious agent in the prevention and therapy of several diseases, as supported by several papers present in the literature, the working efficacy of EA dietary and therapeutic formulations have been mainly examined at preclinical level. To date, few clinical studies have been performed to evaluate EA beneficial effects in humans, with often a limited number of patients, and most of them concern the administration of pomegranate juice or extract in cancer patient diet or deal with the evaluation of the enhancement of cognitive/functional recovery after stroke [34][35]. It was suggested that EA’S low water solubility and rapid metabolism might hinder the progress towards translational research. In our opinion, further studies focused on the application of micro and nanotechnology could provide more encouraging data, opening the path to new strategies able to overcome EA’s poor biopharmaceutical characteristics. Hence, the goal of this review is to provide to scientists, embarking on the research involving EA, a scenario of all pursued formulation attempts. Therefore, starting from a description of EA bioavailability and solubility, a summary of micro and nanosystem-based strategies suitable for improving orally administered EA efficacy is provided.

EA is a chromene-dione derivative (2,3,7,8-tetrahydroxy-chromeno [5,4,3-cde]chromene-5,10-dione), encompassing both a hydrophilic moiety with 4 hydroxyl groups and 2 lactone groups, and a planar lipophilic moiety with 2 biphenyl rings. This particular structure has both hydrogen bonding acceptor (lactone) and donor (–OH) sites (Figure 1). Due to the weak acidic nature of its four phenolic groups (pKa1 = 5.6 at 37 °C), around neutral pH it is mainly deprotonated on positions 8 and 8′, while above pH 9.6 lactone rings open to give a carboxyl derivative [36]. EA low oral bioavailability is mostly due to its poor water solubility (9.7 µg/mL), which increases with pH, as well as the antioxidant action [37]. However, in basic solutions, phenolic compounds lack stability as these molecules, under ionic form, undergo extensive transformations or are converted to quinones as a result of oxidation. A stability study on pomegranate fruit peel extract demonstrated that EA content significantly decreases in few weeks regardless of the pH of the solution, due to the hydrolysis of the ester group with hexahydroxydiphenic acid formation, suggesting that EA should not be stored in aqueous medium [38]; this aspect reinforces the need to develop novel systems also for EA stabilization.

Prior to facing the route of the development of a new delivery system, the knowledge of solvents, co-solvents and substances in which EA could be consistently soluble and stable represents an indispensable step for designing a good formulation. In this regard, with the aim of providing a useful guidance for further research studies, Table 1 gathers published data concerning EA solubility. Concerning organic solvents, EA is slightly soluble in methanol, soluble in DMSO and shows maximum solubility in N-methyl-2-pyrrolidone (NMP), confirming the effect of basic pH on EA dissolution. An analogous trend is also observable in aqueous solutions, where results implied that the solubility of EA depends on the pH values of the media. While EA is almost insoluble in acidic media and distilled water, its water solubility is significantly improved by basic pH. As highlighted further ahead, one of the mostly exploited vehicles is polyethylene glycol (PEG) 400, as it is endowed with satisfactory biocompatibility and, at the same time, is miscible with both aqueous and organic solvents. EA solubility in oils and surfactants is also provided, helpful for developing emulsifying-based techniques.

Silvana Alfei
12 Jan 07:29:17
1
The work reviews an essential topic in the field of biomedical application of bioactive chemicals
View more