Caffeine, a Factor for Osteoarthritis

Osteoarthritis (OA) is one of the most common and disabling rheumatic diseases. It is mainly characterized by articular cartilage degradation, which is fundamental for correct joint function, lubrication, and resistance to mechanical loading. However, the whole joint is normally compromised. As a result of the articular cartilage alterations, typical OA symptoms such as pain and joint failure appear, increasing population’s dependency.

OA aetiology is not fully understood. However, there are some risk factors such as certain genetic profiles, gender, age, exercise, metabolic alterations, obesity and diet habits, which could increase its prevalence. Notably, diet can play a crucial role in OA onset and evolution. Specifically, it is known that caffeine intake exerts a negative impact on articular cartilage. Overall, there is ample evidence indicating that caffeine intake has a negative impact on the physiology of articular cartilage, increasing consumers predisposition to suffer OA. Considering these results, caffeine consumption should be reduced and closely controlled. Specifically, this control should be compulsory to those people whose caffeine metabolism is reduced, such as children and pregnant women.

Osteoarthritis (OA) is the most common and one of the most disabling rheumatic diseases[1][2][3][4][5][6][7][8]. It is mainly characterized by a progressive cartilage destruction which leads to pain, joint failure and dependency[1][8][9].

Articular cartilage is a specialized tissue that covers the surface of diarthrodial joints, providing them for a correct joint function, lubrication, and resistance to mechanical loading[5][6][7][8]. This tissue is devoid of nerves, blood, and lympathic vessels, which hampers its capacity to be repaired[5][10]. Articular cartilage is mainly composed by resting chondrocytes, and the extracellular matrix (ECM), which main components are water, collagens (Collagen type I alpha 1 (COL1A1), Collagen type II alpha 1 (COL2A1), etc.), and proteoglycans (agreccan (ACAN))[5][6][10]. This composition is essential for the maintenance of its unique properties and is crucial for guarantying chondrocyte’s survival[5][6][10] (Figure 1). 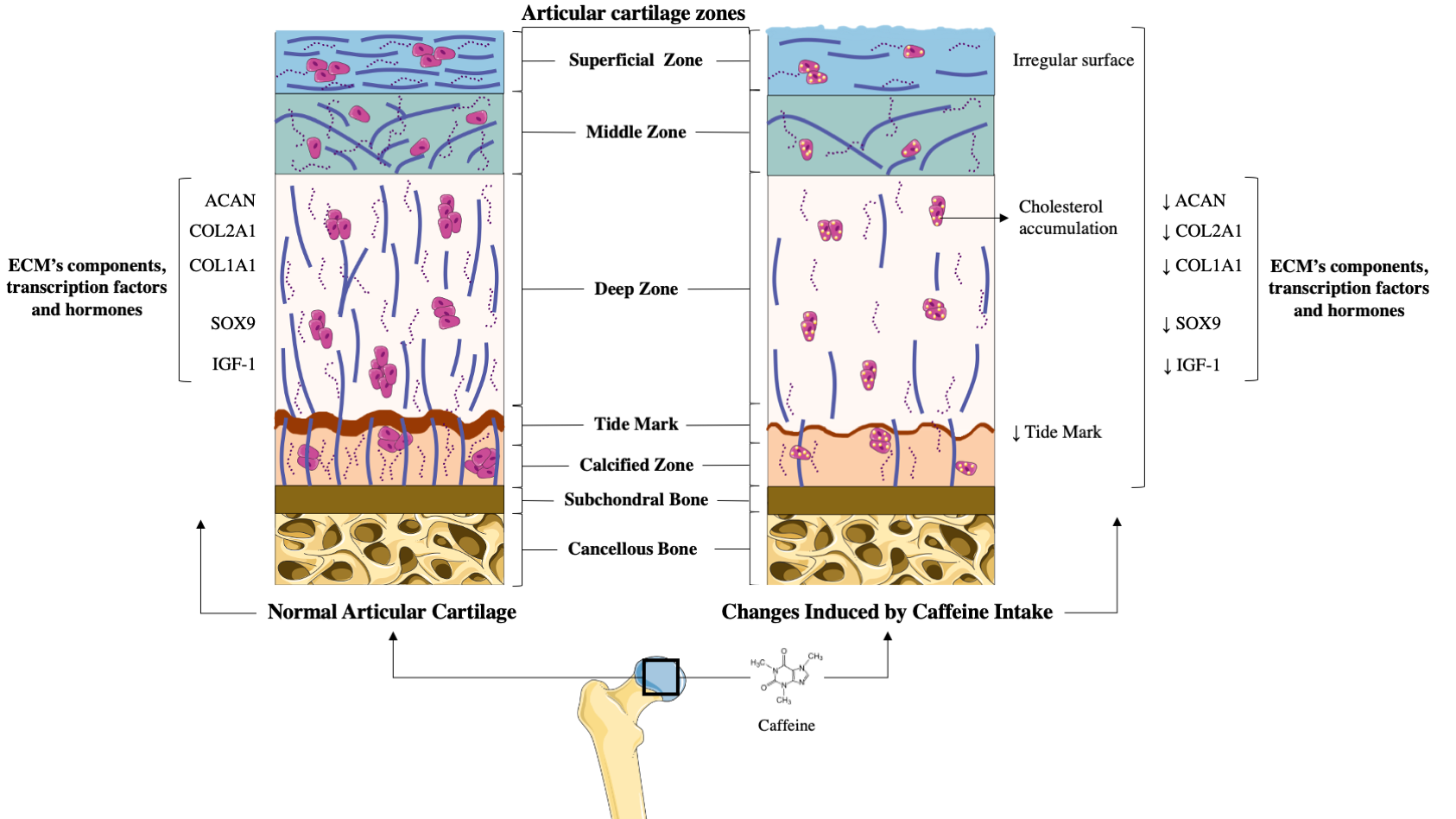 Figure 1. Comparison between healthy articular cartilage and the changes induced on it by caffeine. (A) Normal articular cartilage appearance. Articular cartilage is composed of chondrocytes and its extracellular matrix (ECM) components chondrocytes are crucial for the maintenance and repair of the ECM. They respond to a variety of stimuli, such as cytokines, mechanical loading, and growth factors. Among these, insulin growth factor 1 (IGF-1) and Transforming Growth Factor Beta 1 (TGF-ß1) are involved in cartilage homeostasis and chondrocyte responses to mechanical loading. Likewise, in healthy conditions, the articular cartilage expresses high levels of ECM components to guarantee the chondrocyte’s viability and proliferation. Additionally, a wide and remarkably tidemark is observed, as well as a regular surface that provides the ideal biomechanical properties to the joint. (B) The articular cartilage changes induced by caffeine intake. Caffeine consumption has been associated with several alterations in articular cartilage, similar to those that appear in osteoarthritis (OA). This alkaloid reduces the synthesis of major cartilage ECM components. It also diminishes chondrocyte proliferation, decreases the tidemark, and is associated with an irregular surface of the superficial zone of the cartilage. Additionally, caffeine is linked to lower chondrocyte quality due to cholesterol accumulation.

There are several risk factors for OA development, such as certain genetic profiles, gender, aging, ethnicity, exercise, metabolic alterations, alcohol consumption, obesity, coffee intake, and diet[2][3][4][11]. Notably, multiple modifiable risk factors are closely related to dietary habits, which suggests that diet could play a key role in OA pathogeny[2][3][4][11]. Related to this, the consumption of caffeinated beverages like coffee has been associated with knee OA development, highlighting the negative role of caffeine in the pathophysiology of articular cartilage[11][12][13][14][15][16][17][18][19].

The potential effects of caffeine on the articular cartilage were well demonstrated in rat animal models[12][13][14][15][16][17]. In these experiments, prenatal caffeine exposure (PCE) below the clinical dose of intoxication and in the range of some pregnant women[12][13][14][15][16][17][18][19], significantly affected foetal articular cartilage integrity[12][13][14][15][16][17]. Specifically, histological studies revealed that rat offspring with PCE possess irregular surface cartilage with uneven and altered chondrocytes in the tangential zone[15]. The articular cartilage of these rats also exhibited an irregular and reduced ECM. Interestingly, the tidemark of this articular cartilage was absent, which suggests an altered mineralization process of the hypertrophic chondrocytes[15] (Figure 1). According to all the alterations observed in the histological studies, the Mankin’s score (a scale used for the classification of OA cartilage lesions severity) of the cartilage from the PCE rats was found to be higher than that of their wild type littermates[15]. Underpinning these studies, a molecular analysis of PCE articular cartilage revealed the reduced expression of key components of the ECM, such as COL2A1 and the levels of ACAN and COL1A1[12][14][15][17]. Likewise, it was also reported that the cartilage of PCE rats exhibited a lower expression of several proteins of the IGF-1 signalling pathway, which suggests reduced anabolic metabolism in this tissue (Figure 1). Interestingly, the deleterious effects elicited by PCE on the rats’ articular cartilage were still present in adulthood[12][13].

OA development dramatically affects the chondrocyte phenotype, function, and metabolism, in part reducing the expression of the transcription factor Sox9[8] , which is essential for the preservation of the chondrocyte phenotype and its function[9][20][21]. In this regard, it is noteworthy that caffeine intake in pregnant rats reduced Sox9 expression in the articular chondrocytes of their offspring[17], which is consistent with the reduced vitality and altered differentiation of these cells[17]. This, in turn, involves low-quality articular cartilage [8], which might increase OA susceptibility in adulthood.

Several studies have suggested a relationship between cholesterol accumulation, metabolic syndrome, and the risk of OA[22][23]. Consistent with this, PCE induced low-quality articular cartilage in foetal rats, which was associated with local and systemically altered cholesterol metabolism[15].

Together with these effects, PCE also reduced the IGF-1 signalling pathway in rat foetal cartilage, maintaining its detrimental effects into adulthood[15]. Accordingly, it has been suggested that PCE could support the existence of a subset of OA with a foetal origin[15].

3. Direct and Indirect Effect of Caffeine on Articular Chondrocytes