Integral bridges are a class of bridges with integral or semi-integral abutments, designed without expansion joints in the bridge deck of the superstructure. The significance of an integral bridge design is that it avoids durability and recurring maintenance issues with bridge joints, and maybe bearings, which are prevalent in traditional bridges. Integral bridges are less costly to construct.

Traditionally, bridges are designed and constructed with expansion joints and bearings to accommodate the expansion and contraction of the bridge due to temperature and stress changes. However, expansion joints and bearings need regular maintenance and replacement due to cyclical deck movement, traffic loading, trapped debris, and salt and moisture intrusion [1][2]. Degradation of expansion joints is a persistent cause of costly maintenance and rectification work [3]. Failure to maintain the bridge joints and bearings could cause overstress and structural distress in the bridge structure, which must be avoided. Rectification work is often disruptive to traffic flow and causes an increase in travel time that also incurs socio-economic costs for road users. Although conventional or jointed bridges still outnumber integral bridges, the overall trend of bridge construction towards integral bridges is increasing to avoid the recurring maintenance issues related to bridge joints and bearings.

Integral bridges have been used since 1938 in Ohio, the United States of America (USA) [4]. During the construction boom of the National Interstate Highway System, in the late 1950s and mid-1960s, several USA states began to use integral bridges as a construction choice for bridges. In 1980, the American Federal Highway Association (FHWA) recommended bridges to be constructed as integral bridges for steel bridges with overall lengths up to 90 m, cast-in-place concrete bridges up to 150 m and post-tensioned bridges up to 183 m [5]. According to Tabatabai et al. [6], approximately 70% of the USA State Department of Transportation (DOT) have already included integral bridges in their jurisdictions. In 1996, the British Highway Agency recommended adopting an integral bridge design approach for any bridge with a length of up to 60 m [7]. Integral bridges in other regions and countries, e.g., Europe, Japan, Canada, China and Oceania, also witnessed rapid development in the last few decades.

Under cyclic thermal, environmental and mechanical loading, the bridge superstructure expands and contracts. Movements particularly in the bridge deck of integral bridges will cause the bridge abutment to displace directionally into and away from the approach fill with each cycle. The movements of the abutment and substructure mobilise significant soil–structure interaction (SSI) effects [8][9][10][11], such as stress variations, soil densification, stress ratcheting [12][13][14], heave, settlement and/or slumping of the backfill soil [15][16], which in turn affect the overall performance of integral bridges. Stress ratcheting is the phenomenon that increases the lateral earth pressure applied on the abutments due to cyclic movements transferred from the bridge deck [12]. Pile-supported systems will also be affected by the abovementioned issues of integral bridge. The repeated actions of deck movements, much of which is induced by temperature changes, may be transferred to the piles, changing the soil properties around the pile. Many researchers have reported that the overall pile–soil interaction is dependent on various factors including pile type, pile orientation, pile flexibility, soil properties around piles and substructure stiffness [17][18][19][20]. Cyclic displacements and moments transferred to pile foundations are at risk of causing pile fatigue failure [21]. The complexities associated with pile–soil interaction ultimately affect the overall performance of the integral bridge including the bridge approach. Despite this, Philip [22] reported that only two states in the USA consider the pile stress due to thermal movements, while other states neglect this aspect in the integral bridge design.

It is quite evident from literature that different countries and jurisdictions are using a variety of design guidelines and practices to deal with the geotechnical issues for abutments and pile foundations. Therefore, this paper aims to present a comprehensive review of the design guidelines and the literature relevant to the recommended practices corresponding to the geotechnical aspects of integral bridges incorporating the effects of SSI. In the literature, a variety of definitions and terminologies have also been used to describe integral bridges. This can sometimes cause confusion to the reader. Hence, this paper begins with a discussion on different terminologies and definitions used for integral bridges to establish the context for the review.

2. Terminologies and Definitions of Integral Bridges

The diversity in design and construction of integral bridges created various terminologies and definitions. The type of design and construction ultimately has ramifications on the geotechnical aspects of integral bridges. According to the widely accepted definition used by bridge engineers, an integral bridge is one where the bridge deck is without any expansion or contraction, and they can be sub-categorised as an integral abutment bridge (IAB) or a semi-integral abutment bridge (SIAB). A bridge with a fully continuous or integral connection between the deck and the abutment is defined as an IAB. In the literature, IABs are also referred to as fully integral abutment bridges (FIABs). The SIAB, like the IAB, has a continuous deck without joints, but with bearings between abutments and the bridge deck, such that the superstructure is not continuous or monolithic with the abutments. It is noted that the terms IAB and SIAB are quite extensively used in North America. 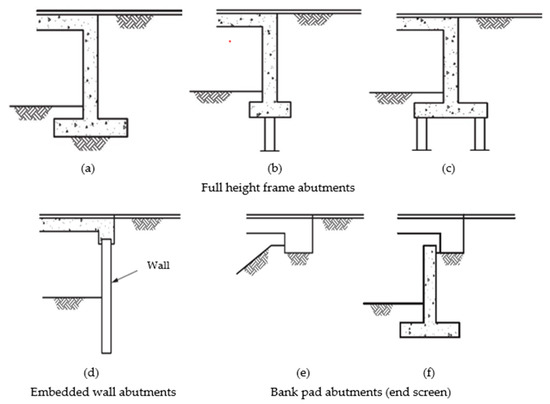 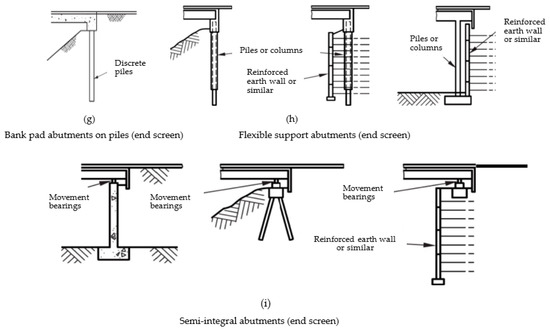 The movements in full height frame abutments are accommodated by rotation or flexure of the abutment wall—whereas, in end screen abutments, the abutments can translate in and out of the fill to compensate for the deck movements. PD 6694-1 [24] provides further sub-classifications for end screen abutments: bank pad abutments including those supported on the ground or piles as shown in Figure 1 e–g, flexible support abutments as shown in Figure 1 h, and semi-integral abutments as shown in Figure 1 i. According to PD 6694-1 [24], semi-integral abutments consist of the movement bearings at the connection between the vertical support at the end of the bridge deck and conventional or embedded walls or reinforced soil abutments. The movement bearing connection accommodates the deck expansion and contraction without transferring the effect to the bridge abutment.

3. Geotechnical Guidelines and Practices for the Design of Integral Bridges

For ease of reading, a more detailed summary of the recommendations from several USA state DOTs regarding the types of abutments in integral bridges, limiting criteria for selecting integral bridges, and design parameters and mitigation measures, particularly in respect of geotechnical requirements, are presented in Appendix A , Appendix B , Appendix C and Appendix D .

However, for other types of abutments, such as integral abutments on single rows of piles and embedded wall abutments, and for over-consolidated backfill material, cohesive soil and layered soil, limit equilibrium methods are not adequate. Hence, SSI analysis should be used to calculate the horizontal earth pressure behind integral abutments.

Bridge design engineers in New Zealand generally refer to the Transport Agency (NZTA) Bridge Manual for guidance on the design of integral bridges, including specifications on the lateral earth pressure [30]. The geotechnical provisions for calculating the earth pressure distribution behind the abutments of integral bridges are provided in NZTA’s Bridge Manual and NZTA research report 577 [31] based on the provisions of BA 42/96 [32] and PD 6694-1 [33]. It has further emphasized the parameters that need to be considered for the SSI analysis for full height integral abutments founded on a single row of vertical piles and integral embedded wall abutments (which will be discussed in Section 3.9.1 ).