Uremic toxins (UTs) are mainly produced by protein metabolized by the intestinal microbiota and converted in the liver or by mitochondria or other enzymes. The accumulation of UTs can damage the intestinal barrier integrity and cause vascular damage and progressive kidney damage. Together, these factors lead to metabolic imbalances, which in turn increase oxidative stress and inflammation and then produce uremia that affects many organs and causes diseases including renal fibrosis, vascular disease, and renal osteodystrophy. This article is based on the theory of the intestinal–renal axis, from bench to bedside, and it discusses nonextracorporeal therapies for UTs, which are classified into three categories: medication, diet and supplement therapy, and complementary and alternative medicine (CAM) and other therapies. The effects of medications such as AST-120 and meclofenamate are described. Diet and supplement therapies include plant-based diet, very low-protein diet, probiotics, prebiotics, synbiotics, and nutraceuticals. The research status of Chinese herbal medicine is discussed for CAM and other therapies. This review can provide some treatment recommendations for the reduction of UTs in patients with chronic kidney disease.

Chronic kidney disease (CKD) is characterized by a gradual decrease in the glomerular filtration rate and proteinuria. CKD is a global health problem, and its incidence has been increasing. The estimated global prevalence of CKD is 8–14% [1][2]. When kidney function deteriorates gradually, many metabolites accumulate in the body. These accumulated substances, termed as uremic toxins (UTs), can result in adverse pathophysiological outcomes [3]. UTs can affect multiple organs and cause renal fibrosis, vascular calcification, anemia, peripheral arterial disease [4], adynamic bone disease [5], adipocyte dysfunction with insulin resistance [6], impaired immune system [7], uremic pruritus [8], and impaired valsartan-induced neovascularization [9].

In 1999, Vanholder and other researchers established the European Uremic Toxin (EUTox) Work Group and divided UTs into three categories based on their solubility, molecular weight, and ability to bind to serum proteins. These categories are small water-soluble compounds such as creatinine and uric acid (UA), middle molecules such as tumor necrosis factor (TNF)-α and interleukin (IL)-1β, and compounds that bind to proteins such as indoxyl sulfate (IS) [10]. The EUTox Work Group continues to identify new UTs and specify their standard and uremic concentrations [3]. Esmeralda et al. revised some UTs items based on several inflammatory markers that would increase the deterioration of CKD [11]. Currently, many hundreds of UTs including small water-soluble solutes, which can be removed through dialysis, and larger and protein-bound molecules, which are less likely to be removed during dialysis [12]. The pathophysiological mechanisms through which UTs cause multiple organ damage are complex and not completely understood. These mechanisms may include inflammation, reactive oxidative stress, cellular transdifferentiation, impaired mitochondria function, intestinal barrier destruction, and changes in intestinal microbiota [12][13][14]. Figure 1 shows the proposed mechanism of UTs generation. After food enters the intestine, it is not only digested by exocrine glands such as the liver, gallbladder, intestines, and pancreas but also decomposed by intestinal microbiota. Protein catabolism produces amino acids. If many ingredients that are favored by harmful intestinal microbiota are consumed, including tryptophan and tyrosine, then they will be converted into UTs through the proteolysis of intestinal microbiota [13][15]. Precursors such as indole and p-cresol are absorbed by human intestinal villi cells into the portal blood circulation of the liver. Subsequently, the liver metabolizes them into IS and p-tolyl sulfate [16]. CKD patients are more prone to constipation than ordinary people. The retention of feces will change the intestinal microbiota and promote the production and accumulation of more UTs. When the anaerobic bacteria that can produce short-chain fatty acids (SCFAs) are reduced, SCFAs such as butyrate and acetate, that promote intestinal contraction is also reduced, which in turn makes constipation worse [17][18]. The accumulation of UTs destroys the protective barrier of the intestinal epithelium, leading to the transfer of microbiota from the intestine to the body [13][19]. After IS produced in the liver enters the blood circulatory system, which is absorbed by proximal renal tubular cells through organic anion transporters (OAT) 1 and OAT3 at the basolateral membrane. The accumulated IS induces oxidative stress and then activates nuclear factor E2-related factor 2 (Nrf2) [20]. Some of these UTs can destroy mitochondrial function. Mitochondria may also be the source of UTs because mitochondria contain certain enzymes involved in the UTs synthesis pathway; thus, they may be the site of UTs synthesis. Moreover, because mitochondria are the key regulators of cellular redox homeostasis, they may directly affect the production of UTs. In addition, because many metabolites can be degraded in mitochondria, mitochondrial dysfunction might cause the accumulation of this toxin in organisms. Therefore, CKD can lead to the appearance of compounds that destroy mitochondria, and subsequent mitochondrial damage can cause further accumulation of UTs; the synthesis of UTs is related to mitochondria [14]. CKD reduces the ability to excrete UTs, leading to the accumulation of UTs in blood. At the same time, UTs can accelerate the deterioration of kidney function, leading to a vicious circle. All these factors together lead to the typical destruction of normal metabolic balance and uremic homeostasis that results in inflammation and uremia, causing multiple organ damage [12]. According to the review articles, due to the use of a highly permeable membrane with a greater pores radius and better preservation of the residual renal function, peritoneal dialysis (PD) could be anticipated that some uremic toxins are more efficiently cleared across the peritoneal membrane [21], and that the plasma levels of p-Cresol (protein-bound uremic toxin) are lower than in hemodialysis patients [22]. 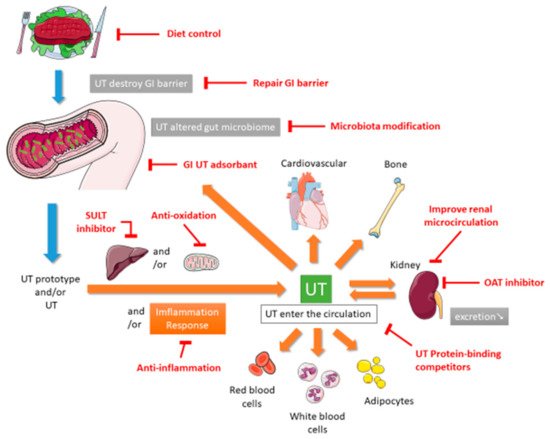 This review describes the potential nonextracorporeal methods from bench to bedside that can be used to reduce UTs levels and improve renal function based on the aforementioned mechanisms. The PubMed, Embase, Cochrane Library, Chinese National Knowledge Infrastructure, Airiti library, and Wanfang databases were searched by using the term “uremic toxin”. To broaden the search, we further reviewed the included articles and citations utilizing the “related articles” facility on PubMed. This paper is organized as follows. The first section focuses on medications including intestinal sorbents, UA modulators, and enzyme inhibitors. The second section focuses on diet control and supplement therapies such as probiotics, prebiotics, synbiotics, and nutraceuticals. The final section describes complementary and alternative medicine (CAM) and other therapies.

In conventional medical therapies, the serum concentration of UTs is mainly reduced using drugs that control underlying diseases to slow down the deterioration of the kidneys, like decrease hypertension, neutralize catecholamines, combat fluid overload, combat dyslipidemia and anemia [23], exert antioxidative effects [24], cause the metabolic degradation of UTs [25], change the bacterial amino acid metabolism [26], inhibit UA synthesis [27], inhibit sulfotransferase [28], reduce amino acid degradation [29], inhibit renal OAT [30], and combine or reduce the intake of toxins or their precursors to adjust the intestinal absorption capacity [31]. In addition, dialysis is performed for extracorporeal removal of UTs; however, the removal of middle and protein-bound UTs through conventional dialysis is inadequate [12]. The following is a brief discussion of treatment strategies that can be used to reduce UTs levels ( Table 1 ).

Acarbose is a small intestinal alpha-glucosidase inhibitor that can increase the number of undigested carbohydrates reaching the colon, increase the production of short-chain fatty acid butyrate in the colon, and reduce intraluminal power of hydrogen (pH) value, thereby inhibiting bacterial deamination and increasing the use of ammonia. In a clinical trial, nine healthy people were treated with acarbose for 3 weeks, and their serum p-cresol declined significantly through changes in bacterial amino acid metabolism [26].

Patients undergoing hemodialysis (HD) may develop L-carnitine deficiency due to intestinal malabsorption, reduced carnitine synthesis, and reduced carnitine clearance during dialysis. In a double-blind, placebo-controlled, crossover trial of patients undergoing HD, supplementation of L-carnitine, an antioxidant, for 8 weeks reduced the malondialdehyde (MDA) level, increased reduced/oxidized glutathione, and enhanced glutathione peroxidase activity and protein carbonyl concentration without adverse clinical effects [33]. The intravenous injection of carnitine supplementation has been shown to have a nephroprotective effect on contrast-medium nephropathy in an open-label, crossover study, it can reduce the neutrophil gelatinase associated lipocalin and SCr [40]. An animal study suggested that the nephroprotective effect of L-carnitine could reduce blood urea nitrogen (BUN), Scr, and MDA levels in CKD rats following right nephrectomy, possibly through antioxidative properties and free radical scavenging [38].

Oxidative stress arises when there is an imbalance between free radical production and antioxidant defense. Uremic toxins can be a source of oxidative stress in CKD patients. Retention of these toxins promotes systemic inflammation via priming polymorphonuclear leukocytes and stimulating CD-8+ cells [41]. Additional associative factors of oxidative stress in CKD include low serum selenium concentration, low platelet glutathione peroxidase activity [42], and lower serum levels of glutathione [42]. Although glutathione is critical to fight against oxidative stress, some evidences disclosed that glutathione is poorly absorbed by oral route mainly due to the action of an intestinal enzyme, the γ-glutamyl transpeptidase which degrades glutathione [43]. Wang et al. ever found that the oral supplementation of reduced glutathione in patients undergoing HD significantly reduced their IL-6 and TNF-α levels but not their Scr or BUN levels in their RCT trial [36]. Although the very low oral bioavailability limits the interest of oral glutathione supplementation, Schmitt et al. demonstrated the superiority of a new sublingual form of glutathione over the oral form in terms of glutathione supplementation [44]. A new sublingual form may be a promising antioxidant therapy in CKD patients in the future.

Synbiotics, a combination of probiotics and prebiotics, have immune system regulation and anti-inflammatory effects. It can improve the intestinal environment and reduce concentration of nitrogen-containing metabolites [48][49], was applied to treat intestinal chronic diseases [49], allergic rhinitis and asthma [50]. An uncontrolled trial showed that a synbiotic consisting of Lactobacillus casei , Bifidobacterium breve, and galactooligosaccharides reduced the PCS level but did not change IS or phenol levels in patients undergoing HD [51].

Another review supports this observation and revealed that plant-based foods and Mediterranean (MD) diet or Dietary Approaches to Stop Hypertension (DASH) diets could reduce many types of UTs; however, the potential risk of hyperkaliemia should be examined [52]. A cohort study revealed that vegetarian diet patients in hemodiafiltration have not only lower plasma levels of IS and PCS, but also lower serum level of urea [53].

Resveratrol (RSV), a natural polyphenol that originates in grapes, berries, and other dietary constituents, exerts antioxidant activity and anti-atherosclerotic effects by modulating the growth of certain gut microbiota, such as Lactobacillus and Bifidobacterium [59][60]. RSV can promote the release of nitric oxide and prostacyclin to maintain endothelial function and adjust vascular tone [61]. RCT confirmed that RSV has cardioprotective effects in patients with stable coronary artery disease [62]. Chen et al. reported that RSV attenuated TMAO in TMAO-induced atherosclerosis mice through the remodeling of gut microbiota [63].

Acupuncture is a popular CAM therapeutic method that can effectively treat certain diseases such as pain and insomnia; this method is recognized by WHO [64]. Acupuncture can stimulate the production of endomorphin-1, encephalin, β-endorphin, and serotonin in plasma and brain tissue, thereby achieving the effects of analgesia, sedation, and immune regulation [65]. In an RCT including 53 patients with CKD, once-weekly electroacupuncture at bilateral Hegu (LI4), Zusanli (ST36), and Taixi (KI3) for 12 weeks improved renal function; the reduction in Scr levels induced by reduced eGFR was greater in the acupuncture group than in the sham acupuncture group [66]. Acupuncture might improve renal function by regulating sympathetic nerves and activating biologically active chemicals [67].