Reactive oxygen species (ROS), reactive molecules and free radicals derived from molecular oxygen, are responsible for the elimination of microbial invasion [1]. Although phagocytes, such as macrophages, are innate immune cells that are important for the elimination of pathogens, including viruses, bacteria, and parasites, the abnormal production of ROS causes oxidative stress and consequent cell death. Additionally, inflammation is closely related to ROS levels because unregulated immune response to a pathogen results in overproduction of ROS, which causes damage to the host organ [2]. Excessive production of nitric oxide (NO) also plays a critical role in inflammation. Thus, continuously high ROS and NO levels lead to chronic inflammation, which can result in the onset of various diseases, including atherosclerosis, rheumatoid arthritis, diabetes, and cancer [3][4]. Therefore, detoxification of ROS is a key step preventing inflammation and the subsequent development of chronic inflammatory diseases.
Heme oxygenase-1 (HO-1) is an Nrf2-regulated gene that has important antioxidant, anti-inflammatory, and antiapoptotic effects [5]. While Nrf2/HO-1 signaling plays a protective role in the regulation of oxidative stress and inflammation, NF-κB, a heterodimer of p65 and p50/p105, plays a central role in ROS- and pathogen-mediated inflammatory signaling cascades. In addition, mitogen-activated protein kinases (MAPKs) are involved in inflammation [6]. A previous study reported that ultrasonicated seaweed extract suppressed lipopolysaccharide (LPS)-induced nitric oxide synthase (iNOS) expression and nitrite production via regulation of MAPK phosphorylation without affecting the NF-κB signaling cascade in RAW264.7 cells [7]. Additionally, the phosphorylation of MAPKs is central in skin inflammation response to ultraviolet (UV) light exposure in vitro and in vivo [8][9]. Therefore, in addition to NF-kB, MAPKs may be a prime target for anti-inflammatory nutraceuticals.
Schinus molle L., also known as Peruvian pepper, Brazilian pepper, American pepper, Californian pepper, or molle de Peru, is a fast-growing evergreen tree [10]. Pink pepper is classified into the Californian/Peruvian type (S. molle) and the Brazilian type (S. terebinthifolius) [11]. Although it is unrelated to the black pepper (Piper nigrum), the pink fruits of S. molle are known as pink peppercorns and are used as alternatives to black pepper due to their flavor and pungency [12]. Research on pink pepper has primarily focused on the chemical composition and physicochemical characteristics of its essential oil and its antimicrobial activities [13][14]. The results of recent studies have revealed that polysaccharides from S. molle fruit have in vitro antioxidant, antigenotoxic, antidiabetic, and antihemolytic effects, as well as in vivo anti-inflammatory and antinociceptive properties [15]. However, the differences in the chemical compositions and the antioxidant and anti-inflammatory effects of S. molle fruits from different countries remain unclear.

Figure 1. Photographs of dried pink peppers from different countries and black pepper.
To compare the general characteristics of pink and black peppers, we analyzed the color and carbohydrate contents of the peppers. Table 1 summarizes the Hunter L, a, b values and fructose and glucose contents of PPB, PPI, and PPS. We determined fructose, glucose, sucrose, and maltose content in the pink and black peppers (S1) using HPLC assay [18]. While fructose and glucose were not detected in BPV, the pink peppers showed relatively high levels of both monosaccharides. PPS and PPB had the highest fructose content (11,829.82 ± 23.73 mg/100 g) and glucose content (9816.07 ± 36.51 mg/100 g). In the HPLC chromatogram of sugar analysis, we detected two peaks that were consistent with the fructose and glucose standards (Figure S1). Feriani et al. identified fucose (10.90% ± 0.024%) in S. molle fruits from Tunisia, and interestingly, glucose was not detected [15]. On the HPLC chromatogram obtained for pink pepper, we confirmed two peaks that were consistent with the standard peaks of fructose and glucose, but no peaks corresponding to fucose were detected (Figure S1). Therefore, we ruled out the hypothesis that fucose would be present in considerable amount in commercial S. molle. Further, Solis et al. reported that fresh and residue seeds of S. molle contained 16% glucose; however, they did not confirm fructose and fucose [19]. In our method, we used 70% EtOH for sample extraction, while Feriani et al. used hot water extraction for S. molle fruits from Tunisia. Therefore, these differences in monosaccharide contents seem to be due to the differences in the origin of the peppers, cultivation environment, and the extraction method.
Table 1. Color and sugar composition of pink and black peppers.
(1) Values are the average of experiments (n = 5) and represented as mean ± standard deviation; different letters (a–d) in a column indicate values that are significantly different at p < 0.05.

2.3. Quantification of Major Compounds in Peppers by HPLC

Overproduction of ROS damages cells and host organs and subsequently causes inflammation and diseases [26]. Although PPB and PPI have higher DPPH and ABTS radical scavenging capacities and phenolic compound contents than those of PPS, to evaluate whether this effect is related to the antioxidant and anti-inflammatory effects in cells, we selected PPB and PPS as having the highest and lowest effects. By using DCFH-DA as a chemical probe for ROS, we determined that PPB significantly suppressed LPS-induced ROS production in RAW264.7 cells (Figure 2A,B). Increased ROS levels are affected by various factors, such as antioxidant enzymes. Among many antioxidant enzymes, HO-1 has been reported to correlate with increased intracellular ROS production [27]. In the present study, PPB and PPS significantly induced HO-1 expression in RAW264.7 cells independently of LPS (Figure 2C,D). Additionally, PPB and PPS increased nuclear Nrf2 translocation (Figure 2E). The results of several studies have suggested the DPPH and ABTS radical scavenging capacity of S. molle [14][15][28], but the effect of this pepper on cellular antioxidant and antioxidative enzyme expression is unclear. Here, we found that the antioxidant capacity of S. molle fruit is due to an increase in Nrf2 translocation from the cytosol to the nucleus and HO-1 expression in RAW264.7 cells. Additionally, we confirmed that the radical scavenging capacity at the test-tube level and the phenolic compound content highly correlated with the antioxidant activity in RAW264.7 cells. 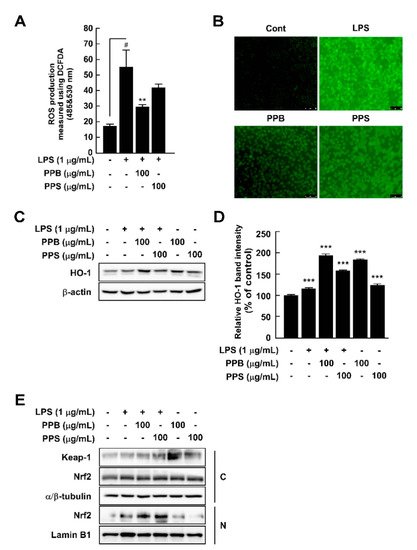 2.6. Effects of PPE on LPS-Induced Nitrite Production, iNOS and COX-2 Expression, and p65 and MAPK Phosphorylation in RAW264.7 Cells 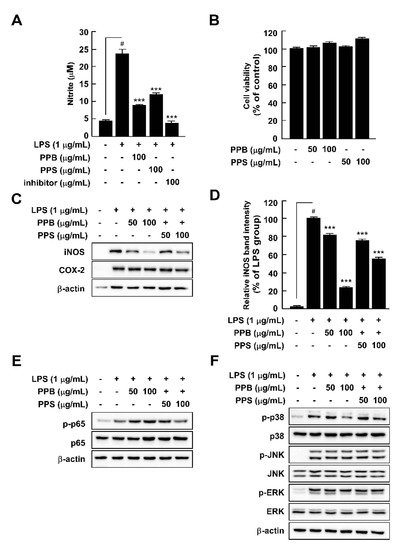 2.7. Effects of PPE on UVB-Induced COX-2 Expression and MAPK Phosphorylation in HaCaT Cells 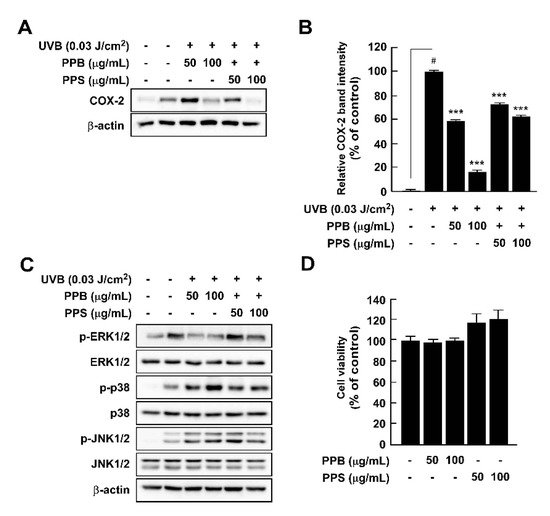 Figure 4. Effects of pink pepper extract (PPE) on UVB-induced COX-2 expression and MAPK phosphorylation in HaCaT cells. (A) PPE suppressed UVB-induced COX-2 expression in HaCaT cells. Cells were treated with the indicated concentration of PPE for 1 h and then stimulated with UVB (0.03 J/cm3) for 4 h. (B) Quantification of COX-2 expression by PPB and PPS. (C) PPE suppressed UVB-induced phosphorylation of ERK1/2, but not p38 and JNK1/2. Cells were treated with PPE for 1 h and then stimulated with UVB (0.03 J/cm3) for 30 min. (D) PPB and PPS did not affect the cell viability at the tested concentrations. The cells were treated with increasing concentration of PPB and PPS for 24 h. Phosphorylated MAPK and COX-2 expression were detected by Western blot. Data are presented as mean ± standard deviation of three independent experiments. # p < 0.05 between control and LPS-exposed cells (no PPE); *** p < 0.001.