Venous thromboembolism, which includes both deep venous thrombosis and pulmonary embolism, is a major cause of morbidity and mortality among patients with cancer. The impact of ABO blood type in the development of venous thromboembolism in cancer patients remains controversial. To develop a sense of current opinion in this area, we conducted a systematic review and meta-analysis. Blood type is routinely determined preoperatively by objective and standardized methods, and our results suggest that these blood type results are useful for risk stratification and potentially for encouraging appropriate strategies for implementation of prophylactic treatment strategy in venous thromboembolism management.

We found a total of 598 studies for an initial assessment. From these, we removed 40 duplicates and excluded non-relevant studies, review articles, meeting abstracts, case reports, replies, editorials or commentaries, and studies in languages other than English. This left 40 studies for review, from which we identified nine studies for systematic review [8][9][10][11][12][13][14][15][16] and five studies [9][10][12][13][14] for qualitative meta-analysis (Figure 1). 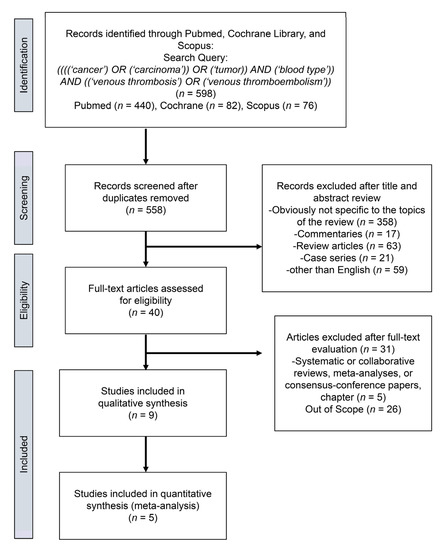 3. Characteristics of the Included Studies

Table 1 lists the general characteristics of the eligible studies. All studies had a retrospective design and were published between 2004 and 2020. Patients were enrolled from Europe in 1 study, from North America in 7 studies, and from Asia in 1 study. Overall, 1118 of 25,884 patients developed venous thromboembolism. The treatment details were reported for seven studies in 24,996 patients: 24,473 of those patients (97.9%) underwent a surgical procedure (biopsy or surgical resection). The rate of development of venous thromboembolism in patients whose blood type was O and non-O was 9.2% and 13.6%, respectively. All of the eligible studies were retrospective, so pharmacologic prophylaxis was not standardized. In addition, the timing of diagnostic evaluation of patients for venous thromboembolism was based on symptom presentation and/or clinical evaluation, and most of the studies did not follow a precise protocol. Multivariate logistic regression analyses were not performed in three studies [8][11][15], and although Wang et al. evaluated the association of venous thromboembolism with ABO blood type, they reported a higher risk of each non-O blood type (A/B/AB) compared to O blood type (OR (95% CI); A: 2.072 (1.204–3.566), B: 1.944 (1.020–3.873), AB: 2.706 (1.432–5.114)). These four studies were excluded from our meta-analysis.
Table 1. Characteristics of all articles included in the study.
NOS, Newcastle-Ottawa Scale; VTE, venous thromboembolism; NR, not reported.

Figure 2. Forest (A) and funnel (B) plot showing the association of ABO blood type with the development of venous thromboembolism among patients with cancer. 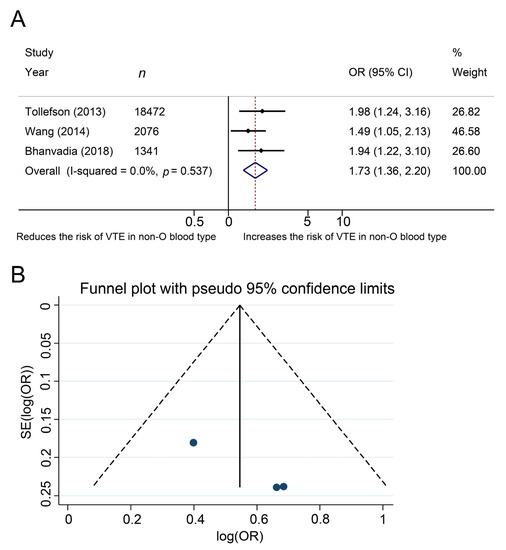 Figure 3. Forest (A) and funnel (B) plot showing the association of ABO blood type with the development of venous thromboembolism among patients who underwent pelvic surgery for urological cancer.